So I haven’t done any sort of post on writing lately. The good news is that this is mainly due to the fact that I’ve been too busy with actual writing. I’m seven chapters in to the rough draft of A Dragon at the Gate (possibly eight, depending on how I break it up). Things were moving along pretty well there for a while, but then I hit a snag. END_OF_DOCUMENT_TOKEN_TO_BE_REPLACED

“After we’re married, and I mean RIGHT after, they turn us into statues.”
“That. Is. Fascinating!”
“Excellent. D’Argo discovers science.”

This is Farscape’s first three-part episode, which I expect likely surprised some people at the end of part 2. (Did anyone really do three-parters then?) Crichton finds himself at the center of some royal political intrigue when it’s discovered that his funny human genes are the only ones on the whole planet compatible with the colony’s princess. Soon it’s either marry her and live out his life there, or get handed over to Scorpius’s Brain Vivisection Emporium.

This is a great episode, and a great series of episodes. Caught as the planet is between the Peacekeepers and the Scarren Empire[1] the episode is primarily filled with political intrigue. It’s intriguing to watch the maneuvering all around Crichton as he tries to just figure a way through it all, torn between freedom, safety, and death. There’s not much action in this episode, but the political maneuvering keeps things tense. Scorpius is menacing even when he’s just talking calmly to D’Argo in a bar [2]. Rygel gets to play quite competently in his element (politics, I mean, not water). It’s clear he’s used to such arenas (and quite happy to be in them again, even for just a while). Someone put Rygel into Game of Thrones, hmm?

Meanwhile, Aeryn gets all cranky and complicated and frustrated because she doesn’t know how to–or is afraid to–show her feelings. It sets her on a trajectory that will lead to her soon running off with a male model.

D’Argo gets a fair bit to do too [3], and much more than one would have expected in the early part of the first season. He’s John’s sounding board, especially since Aeryn’s all riled up. In counseling John, especially after he’s just found out about the statue, D’Argo’s advice grows more philosophical than we usually see from him. It’s a nice new side to the character, and there’s a bit of subtext in that when D’Argo’s talking about all the positive things of settling down in a stable place and raising a family, there’s likely a huge part of him wishing he were in Crichton’s place. Also that scene has a great end to “cut the treacle” a little: “If I do this, you’re going to have to be my best man.” “Ah…I’m with Chiana now, John.” 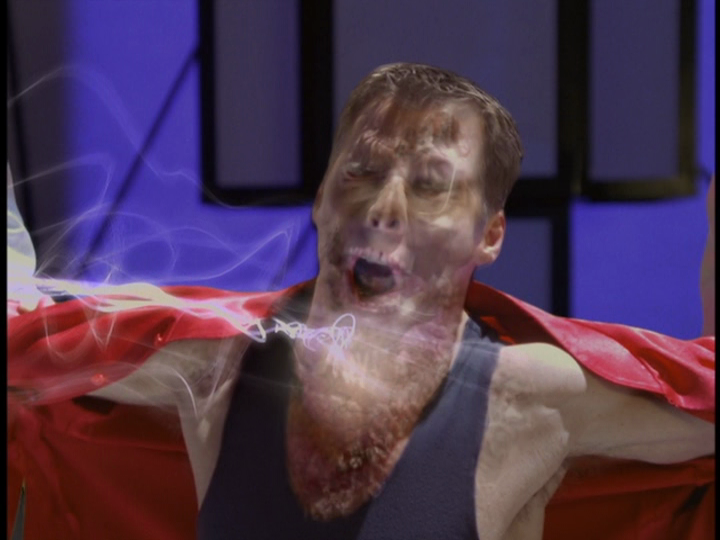 Of course, it ends with John’s face being melty-warped (seems like that’d be hard to recover from), and a “to be continued…”

Other Comments:
The bit in the bar where Aeryn kisses Rygel is possibly one of the funniest scenes in Farscape.

The pyramid shape of royal palace is evocative of a goa’uld Ha’tac ship from Stargate. ‘Cept pointier.

If the Scarrens are trying to get the prince into office so they can gain influence, but the prince won’t actually begin ruling for at least 80 years, they’re playing quite the long game. Or maybe we’re just not supposed to think of that.

[2] Is this one of the few scenes he has with D’Argo in the whole series?