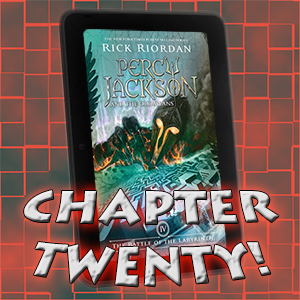 Plus my final thoughts on the book…
I bet you thought I’d never get here, huh?

At long last, I reach the final chapter of Michael Reads Percy Jackson: The Battle of the Labyrinth, a.k.a…

So I wondered how long it had taken me, in my tremendously stilted reading & blogging schedule, to read through this entire book. I knew it had been a while, but I was shocked to find out I started this particular volume of the Percy Jackson series all the way back in September! Yikes! It’s definitely not the fault of the book. I think The Battle of the Labyrinth has been my favorite in the series so far. END_OF_DOCUMENT_TOKEN_TO_BE_REPLACED 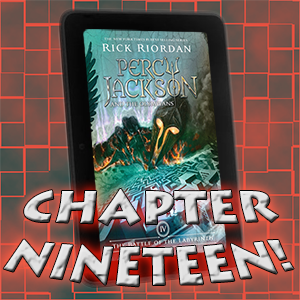 A battle’s aftermath, Dionysus isn’t a total jerk, and denial ain’t just a river in– You know what? That saying doesn’t work nearly so well in text. Anyhoo, on we go to the 19th chapter of Michael Reads Percy Jackson: The Battle of the Labyrinth…

The Council Gets Cloven

END_OF_DOCUMENT_TOKEN_TO_BE_REPLACED

If you’ve been following me on Twitter or Facebook, you already know this, but just in case you’re not stalking me to the best of your ability: Yesterday, April 3rd, 2016, at just about exactly 3pm, I finished writing A Dragon at the Gate!!!

Yes, okay, so there will be more work done on it. My editor will surely have things to say, and I’m waiting to hear back from a beta-reader or two with some input, but it’s now in a state where I consider it ready to move on to the publishing phase. Note the use of the word “phase” in there. It’s not instantaneous. Along with the final editing, there’s also layout, setting things up regarding at least a little bit of marketing, and oh, gee, it still needs a cover!

Still not the actual cover!

And since I mentioned the cover, I’m really excited to be working with Amalia Chitulescu again to come up with another great cover that matches the style of the first two in the series–both of which are her work. I’m not yet sure when we’ll have the cover finalized, but you can bet I’ll be doing a reveal here.

“Yes, Michael,” I hear you asking, “that’s all well and good, but when do we get to READ the damn thing?!” Dates are still in flux, but once I and the editor/designer/publisher peoples get all of our ducks in a row, it’s likely to be late summer or early autumn. Hopefully very early autumn, if it does take that long. I don’t want to keep you all waiting too much longer. Then again, maybe I should keep pushing it back because given some of the events in book 3, I do wonder if some of you will wish to kill me. 😀

But now, I’ve got a little more free time than I used to! I’ll be diving back into Percy Jackson (more on that soon), hopefully getting some more general geek content on this site, and, at long last, start to make some real headway on the Zeus Is Dead sequel. I can’t tell you how many times something funny occurred to me as I was finishing up ADATG that I couldn’t put into the book because it’s not actually a comedy. Well, I mean, except for Felix’s sense of humor. But he can’t say everything I want him to.

Nearly named a fictional motorcycle model a “Thunder” until I realized it will be stolen, & I don’t want unintentional humor at that point.

…And maybe there’s an unpublished fantasy novel that I’ve already written that might be making an appearance. But that’s for another time…