Want to help raise awareness about climate change and help the fight to stop it? Want to get some fun books in the bargain? Starting today, Friday, January 27th, and running through midnight on Friday, February 3rd, I will be donating any and all profits from my book sales to the Environmental Defense Fund.

Why? (Do you really have to ask?) While, as a rule, I don’t post political stuff on this blog–a rule I’m less strict about on my Twitter and Facebook–the fact that there’s a virulent climate change denier in charge of my country right now disturbs me beyond my capacity to articulate. Trump to continues to claim climate change is a hoax–deciding, somehow, that he knows better than the massively overwhelming scientific majority–and now works to ruin the EPA’s efforts to fight it or even to disseminate accepted scientific facts. I care about the planet we live on, about the millions (billions?) of people whose lives will be damaged or even destroyed by unchecked climate change, and about making sure we pass on a cleaner, brighter, healthier future to future generations rather than forcing them to suffer in a world we were too shortsighted, too selfish, or too stubborn to prevent.

Essentially, this kind of thing affects us all, and, as astrophysicist Katherine J. Mack tweeted…

Stating scientific facts about the atmosphere of our planet is not and must not be “politics.” Reality should not be a political stance.

So I guess you could say I’m still not really violating my political posting policy. Ya know, from a certain point of view. (Obi-Wan, working the “alternative facts.”)

I picked the Environmental Defense Fund because it’s a well-established charity with a high rating on CharityNavigator.org. They work on multiple levels via direct action, education, and government partnership, not just for climate change but for developing renewable resources like fishing and crops, and on other fronts as well. (See their website for more information there.)

So, as I said, if you purchase any of my books between now and Friday, February 3rd, I will donate all profits to the EDF. That means every single royalty dollar (and cent) I receive for those sales goes straight on to them.

Now, okay, I’m not anywhere near the highest-selling author in the world, or the U.S., or even my home state or city. (I think I probably sell more books than anyone on my city block, though! Woot?) I’m under no illusions that this will generate a massive donation surge for the EDF–though I’d love for you to prove me wrong, of course. So I’ve already made a donation of my own on top of this, and I plan to pledge a monthly donation out of my own pocket as well. 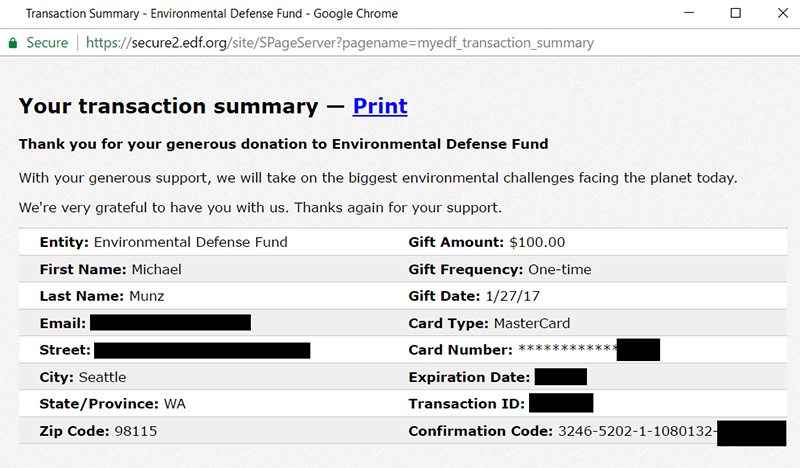 Putting my money where my mouth is. Or EDF’s mouth, I guess. That’s a weird turn of phrase, huh?

Below, for your convenience, are links to where you can get my books. Buy a book (via any means, it doesn’t have to be via these links) and you’ve made a donation at no extra cost to you (beyond the cost of the book itself, of course, in exchange for which you’re getting a book). Already have copies? Did you know you can give Kindle books as gifts now? And, of course, if you’d like to give directly to the EDF as well, go for it!

Update: It’s now Saturday, February 4th, so this promotion is over. Royalties for the past week only totaled $90, but I hope that means a lot of people donated directly to the EDF. To those of you who purchased during that time, thank you, and the funds have now been sent on to the EDF. I also plan to make monthly donations from my own pocket going forward.

Missed the promotion? You can still give to the Environmental Defense Fund directly!