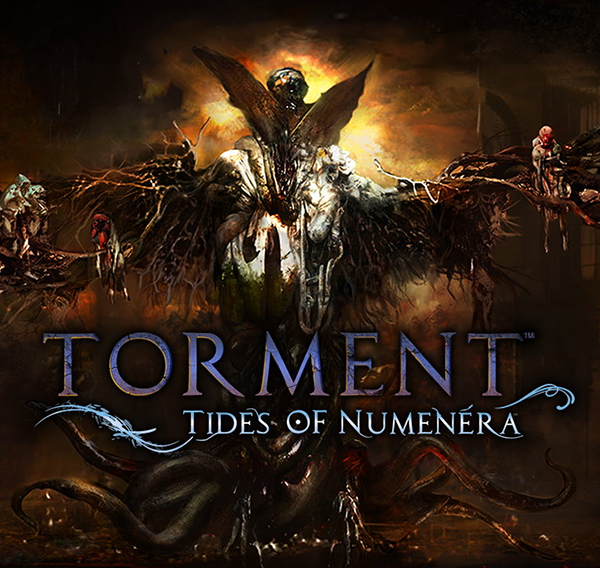 If you’ve been reading this blog for a while, you already know that Planescape: Torment–an incredible story-driven cRPG based on the Dungeons & Dragons Planescape setting, released in 1999 from Black Isle Studios–is among my top 5 PC games of all time. You can therefore imagine how interested I was to get my hands on its spiritual successor, Torment: Tides of Numenera. Funded via Kickstarter, and developed by some of the same folks involved with P:T, it’s not a direct sequel, nor is it even set in the Planescape setting. Nonetheless, from all of the press releases and previews, the game seemed to be cut from the same cloth in terms of artistic direction, general gameplay, and imagination. Today, Tides of Numenera was officially released, and I wasted no time getting my geeky hands on it. What follows are my very first impressions after about an hour of playing…

“But wait, Michael!” says the helpful hypothetical reader, “I haven’t played Planescape: Torment! Hang on one second and tell me just what kind of game this Tides of Numenera is supposed to be!”

The best way to describe it would be to quote ToN’s manual directly, since the game’s makers put in a lot of effort to sum up their game in a nice little quotable capsule (and even ask me to use that very description): Tides of Numenera is a single player, story-driven, sci-fi/fantasy game set on Earth, one billion years in the future. (The makers suggest I emphasized those last words for maximum effect, so, there ya go.) 🙂

Beyond that, I didn’t really know quite what to expect when I started playing. There was a story-related trailer released a little while back, but I intentionally avoided that one. I’d already been sold on the look and feel of the game, and some of the gameplay, so I wanted to come into ToN’s story as fresh as I could. I didn’t even know it was set on Earth until I’d read that description above.

You’re literally plunged into the game from the moment you begin, with your character coming to awareness as he or she plummets out of the stratosphere and smashes–eventually–into the Earth below. Character creation is dealt with hand in hand with a basic tutorial as you find yourself in a mysterious place filled with pools of dripping light, hexagonal stone structures that appear and disappear as you move, and spectral projections of beings that claim to be fragments of– Well, I won’t go into too many spoilers on that front. I can definitely say that the art design immediately succeeds in calling to mind P:T. As I explored, both via moving my character and via the rich descriptions and choices presented in the text box, that reminiscence grew even stronger. Soon I’d escaped the strange place I woke in, ran into a pair of mysterious companions (a man with moving tattoos on his forearms, and a woman that appears to be split into multiple versions of herself), and used a skill specific to my class to get a rather abusively passive-aggressive computer entity to divulge an item that may soon be useful (if it doesn’t kill me first).

Take a look at this and tell me it doesn’t remind you of Planescape. I dare you!

One thing that differs a bit from P:T is that you choose at least part of your character’s path in the beginning. With P:T you were able–after playing a while–to switch your character between mage, fighter, and thief classes. With ToN, you choose your class (known in the game as a “type”), as well as an accompanying descriptor. So far the types (nano, glaive, and jack) seem equivalent to the three classes from P:T. The descriptors are a little different. There’s more of those, each with names like “wrathful,” “intelligent,” “clever,” and “mystical.” (There are more as well.) Each grants different bonuses and penalties. I’m playing a “mystical nano.” At some point in the game, I’ll also pick up a “focus,” which unlocks other unique abilities. Focuses, apparently, have names like “Breathes Shadow” or “Brandishes a Silver Tongue.” So perhaps I’ll eventually be a “mystical nano who slices the moon with a single look” or something. We’ll see.

Part of the character creation process. I went with the “Scan Thoughts” and “Innervate” abilities.

Combat is turn-based, with each character having a movement and attack action to spend. I haven’t had much of a look at this yet. I’ll have to say more in a future blog entry as I progress. Bottom line, I’m enjoying exploring this world. The concept of being a castoff body of an immortal being is intriguing, and I want to know just what this thing called “The Sorrow” is that’s trying to kill me is. Plus my character can read NPCs’ surface thoughts due to a special ability, and that’s just fun to mess around with…

Spinning, glowing cones that giggle and hover in mid-air for no reason I can figure out? Feels like I’m back in the City of Doors.

When you’ve watched Star Wars as much as I have (and God help you if you have), you’ve probably got the majority of the films floating around in your head. Video clips. Audio clips. Weird theories. (SNOKE IS LUKE SKYWALKER’S CLONE!!!) And, again, if you’re like me, you sometimes get them a little mixed up.

The other day on Twitter I ran across a black and white still from The Empire Strikes Back with Vader and Boba Fett standing in the carbon freeze chamber. For some reason, my mind attached a couple of quotes from a different part of the saga to the image. It made me laugh, so I made it into an image and tweeted it out. 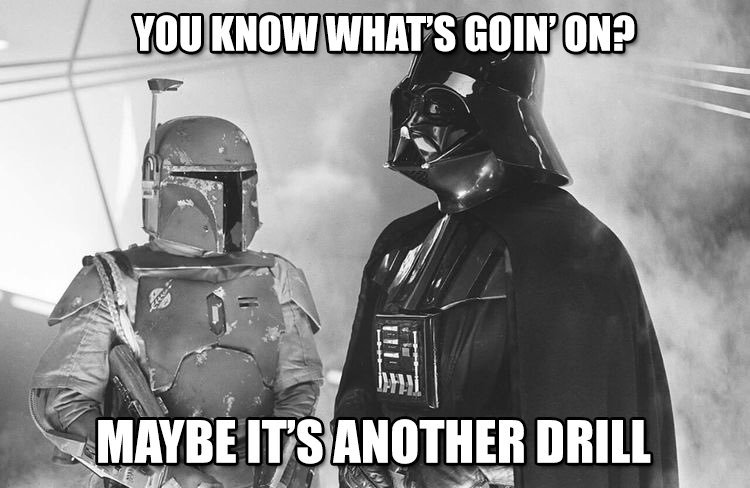 From there, I decided that hey, why not make this a thing? So, for good or ill, I set to work. The first batch you can see below… 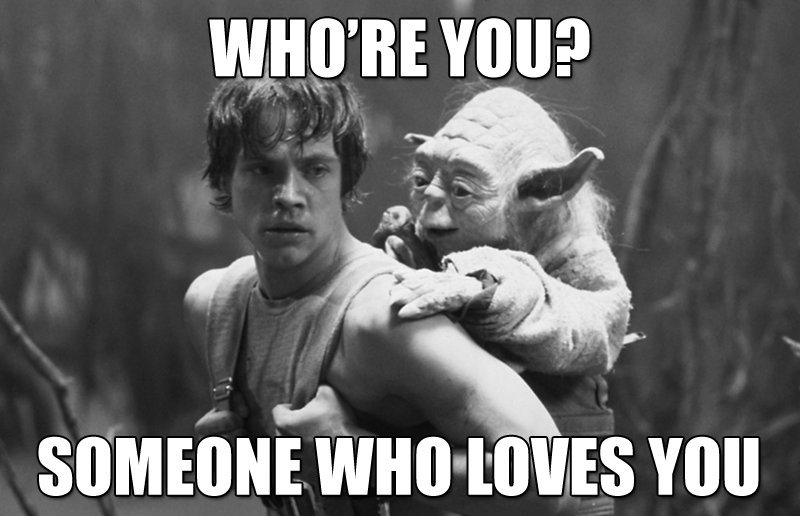 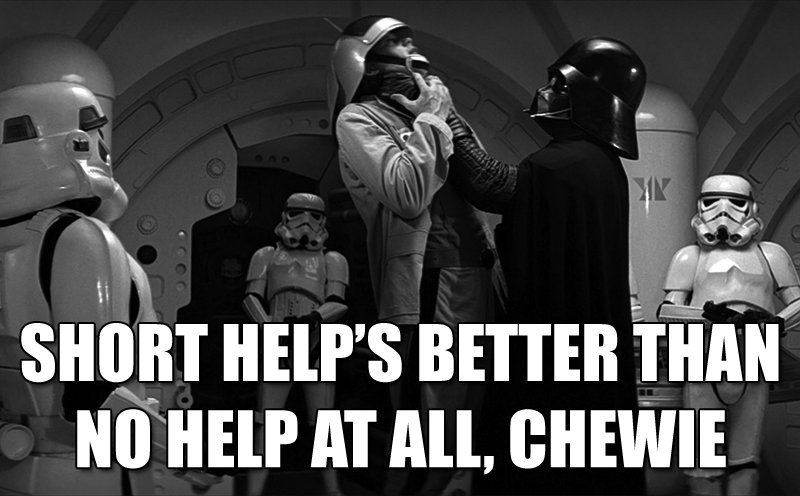 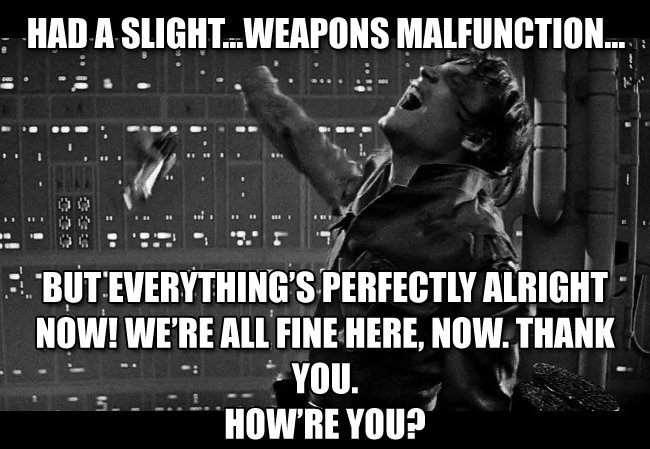 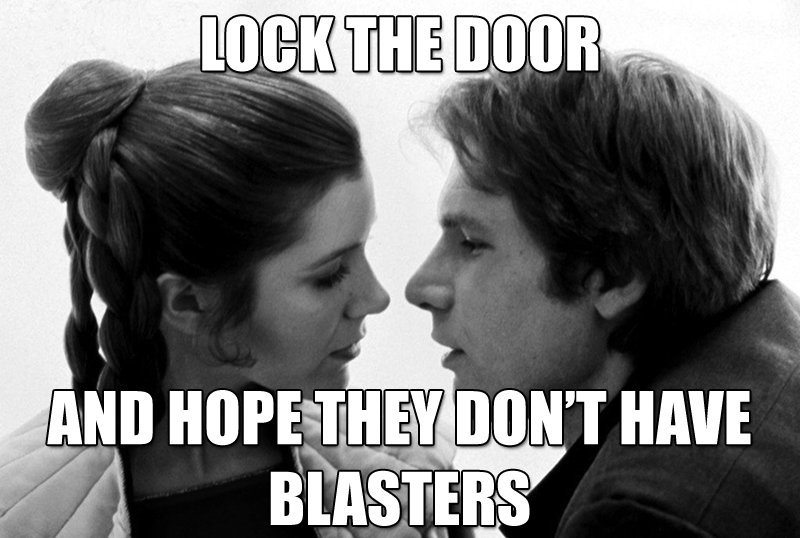 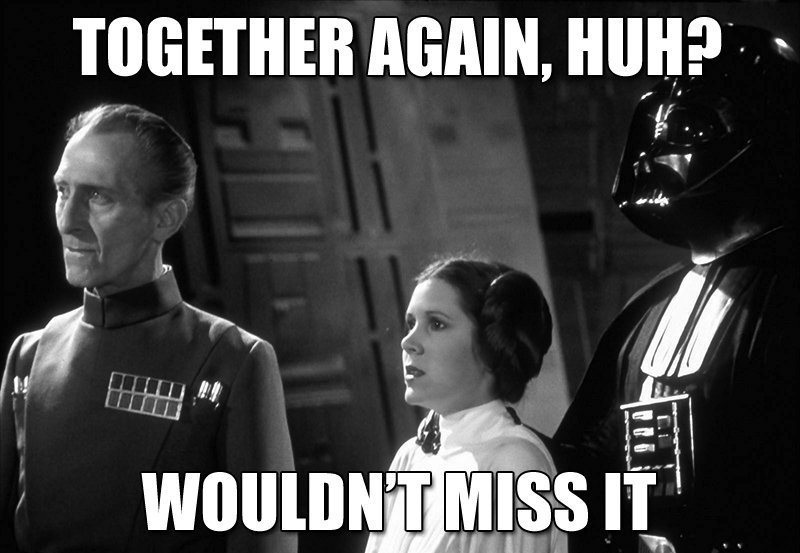 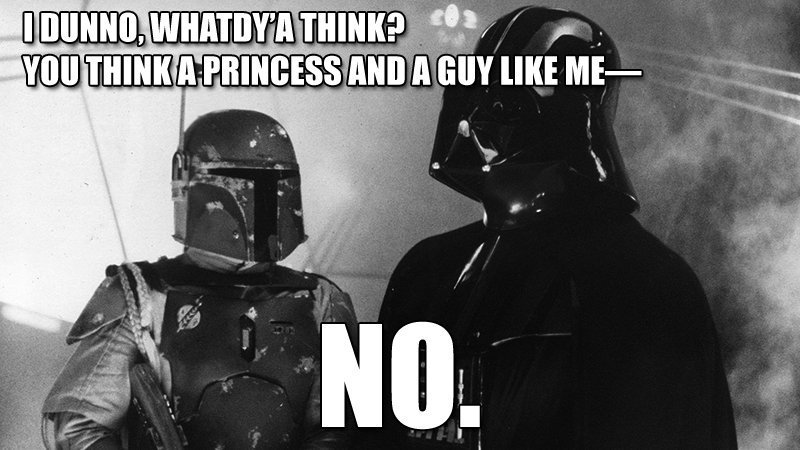 I’ll probably continue this trend in the future. Follow me on Twitter to see them when new mismatched quotes appear, and feel free to make or suggest your own!