Along with tackling Rick Riordan’s take on mythology in my Michael Reads Percy Jackson series, I’ve also been reading something else this month: Camela Thompson’s supernatural thriller All the Pretty Bones:

After ten years of living in the shadow of her stalker, a diagnosis of terminal cancer pushes Olivia Kardos to take matters into her own hands. Her final days will not be spent isolated from the world nor hiding like a hunted animal. It’s time for Mark Porter to die. Going against a trained killer alone would be foolish, but the handsome arms dealer who offers to help her has a dark secret of his own.

Homicide Detective Sean Howard has tried to push his ex out of his mind, but his next case brings her crashing back into his life. A woman is found exsanguinated and brutally stabbed in Seattle’s Queen Anne neighborhood and she could be Olivia’s doppelganger. As more women are murdered and the similarities grow, Sean can’t shake the feeling that Olivia is next.

In a world where demons and vampires lurk just beneath the surface, what you don’t know can kill you.

That’s the back cover description. I’m pleased to share my review with you all… 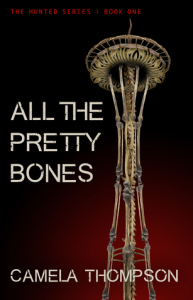 All the Pretty Bones by Camela Thompson

A woman with terminal cancer decides to kill her stalker. That’s the one-sentence description of Camela Thompson’s All the Pretty Bones that raised my eyebrows and piqued my interest. Add a promise of vampires—non-sparkly ones at that—to the mix and I wanted to know more about this book.

I was not disappointed.

Olivia Kardos is a well-drawn heroine with the strength to face difficult decisions and situations, yet enough flaws to feel real. The glimpse Thompson gives us into the mind of Olivia’s stalker is gripping, dark, and visceral, allowing the reader to understand him without sympathizing with his sadistic, controlling, sociopathic heart.

The first chapter grabbed me so completely that I was a quarter of the way through the book before the end of my first reading session, and I swiftly picked it up again to plunge onward. That said, I did find the pace slowed a little more than I personally liked around the 2/3rds mark, but that’s only a nitpick. Readers more familiar with this genre than I may feel differently, and enjoy the extra time spent with the characters.

All the Pretty Bones has a complete story arc, but it’s also the first in a series. Thompson manages to put an excellent new twist on the vampire legend that caught me by surprise a few times as I read. (One warning: Don’t read the legend/appendix at the back of the book until after you finish, as it will spoil some things.) Thompson introduces some fantastic world-building that makes me eager to see where things go from here.

Definitely worth a read if you like some supernatural darkness served alongside a modern thriller.

Full disclosure: Camela Thompson and I are both published by Booktrope (in fact, Greg Simanson did both this incredible cover and the cover for Zeus Is Dead), but this review–as with all of my reviews–is an honest one.