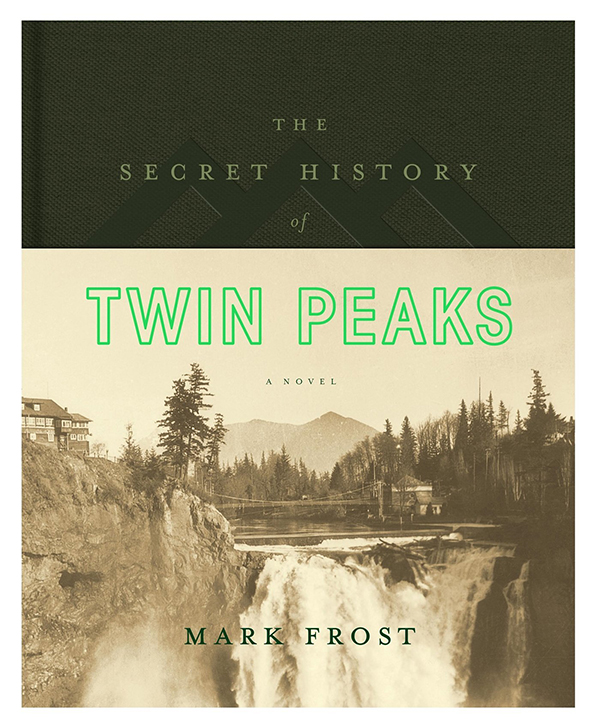 Have I mentioned how grateful I am for Mark Frost’s involvement in Twin Peaks? He’s the co-creator who always seems to get short shrift alongside David Lynch any time the show is mentioned, but between the episodes of the show he wrote, the feel of the Fire Walk With Me movie (done without his involvement), and my love of his supernatural Victorian adventure novel The List of 7 (unconnected to Twin Peaks, a big favorite of mine–it’s a potboiler but no less fantastic for it), he’s a vital element of the show–at least, so far as I’m concerned. His particular style is all over the newly released The Secret History of Twin Peaks, which is a worthwhile read for anyone who’s a fan of the show.

At some point between when I pre-ordered it a few months ago (an event that occurred approximately 37.6 seconds after I learned of its impending existence) and when I began writing this review, the book was touted to tell us fans what had happened in the town of Twin Peaks in the last 25 years since the events of the second season (and, as it turned out, series) finale. It was what grabbed my attention on the pre-order, and I remember seeing the same claim right before I started reading…somewhere. Yet when I went to the book’s Amazon page to get the specific wording, it had vanished like BOB in the mirror. So maybe I’m just crazy, but I want to address it anyway, in case any of you saw the same claim:

The Secret History of Twin Peaks does not catch us up on everything that’s happened in Twin Peaks in the last 25 years. It does deliver some details–specific in some cases, tantalizingly vague in others–but they’re small morsels sprinkled throughout the book like ducks on a lake. (More on those later in a special spoiler section.) That said, if you’re a Twin Peaks fan, it’s still worthy of your time.

Why is that, you ask?

For one thing, Mark Frost has given us a book that transports you back to the very feel of Twin Peaks: of deep, unknowable mysteries lurking just beyond our reach. Secrets hidden, secrets kept, and occasionally surfacing to wreak havoc upon the veneer of our modern calm before returning again to the places from which they came. As I read through the book, which takes the form of a dossier of the town’s history dating back to the days of Lewis and Clark, I experienced the same haunted feeling I got in college when my friend Nick first showed TP to a small group of us in the Haggett Hall dorm at the University of Washington[1]. I can still recall creeping back up to my dorm room at 1am through dimly lit, quiet hallways and trying not to imagine BOB suddenly appearing to walk down the hall toward me with that wicked grin on his face. I read TSHoTP in the evenings before bed, and it’s entirely possible that when I went in to brush my teeth afterward, I might have studiously avoided glancing into the bathroom mirror.

The creepiness tapers off  slightly as the book goes on, partially due to the topics in the middle of the book being more to do with conspiracies, and those toward the end being already familiar as events of the series itself are covered from a different angle. But it’s still a pleasure to read. The book is well titled; it reads like a history rather than a more traditional narrative, but the style choice works in the book’s favor. After all, there is a certain thrill with leafing through classified documents and pouring over the notes of those who’ve read them before.[2]

So what aspects of the town’s history does the book cover? Without going into spoilers (again, there will be a special spoiler section below after this), here’s a bit of a taste:

Hard core Twin Peaks fans will notice some discrepancies between events depicted in the series and those described in the book. (I’ll list some in the spoiler section.) I’m not really sure if that’s due to an oversight on Frost’s part, or if it’s intended retconning. Perhaps Twin Peaks 2017 will shed some light there. In either case, I don’t mind it, and it doesn’t hurt the book.

In fact, my only real complaint is the near-complete omission of Windham Earle. As the book got nearer and nearer to the time of the series’ events, and as it touched on Project Blue Book, so did my anticipation grow for more insight into Earle and his Project Blue Book involvement[3]. Yet there was practically no mention of him. It was perplexing, especially given the identity of the archivist. Was there originally more there, excised to preserve things for the new series? Was it an in-universe omission? (I could see the omission being a conscious choice of the archivist.) Whatever the cause, I was disappointed. 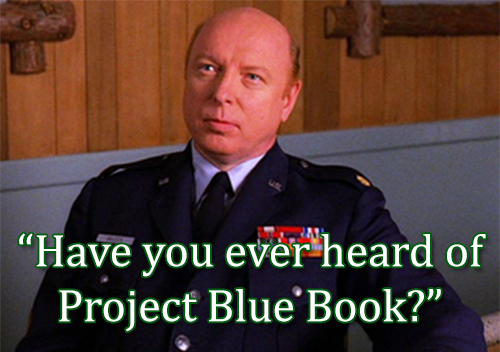 Before I get to the spoilery section, one final thing: I’m honestly unable to judge just how much this book might interest those who’ve not actually seen the series. It obviously gives away a number of key plot points from the series itself. Those who enjoy mysteries may find the earlier parts of the book engaging, but they’d probably enjoy things more if they caught up with the show on Netflix first, and then tackled this book.

[1] alma mater of actor Kyle MacLachlan
[2] Speaking of which, get the hardcopy version instead of the ebook. The book contains a number of graphics of hand-written letters and notes, which are pretty hard to read on a Kindle.
[3] among, shall we say, other things

The next part of the review will contain some spoilers with specifics on the aforementioned discrepancies, and what the book says happened to some characters after the finale…

Not frightened off yet? Good!

Okay, so first, here’s what I noticed in terms of differences between the show and the book:

And now, the big stuff: Who survived the pilot? And what happened to them after?! This is what the book reveals:

So, there it is. If you’re at all curious, I recommend having a look. It’s a fun, mysterious return to Twin Peaks, and it’ll help sustain you as we wait for the new series in 2017…