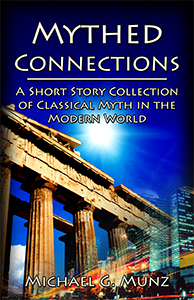 “The Atheist and the Ferryman”: An atheist named Marcus learns the hard way that just because the old man living a hovel along a river that flows through a giant cavern in his basement is crazy, it doesn’t necessarily mean that he’s not telling the truth about being the ferryman to the land of the dead.

“Snipe Hunt”: Janette’s older brothers have ditched her in the woods. Again. But when Hermes takes a liking to her, vengeance is hers.

“Playing with Hubris”: A young man a café finds himself stalked by a man claiming to be the god Apollo, who says he wants to help him and won’t take no for an answer.