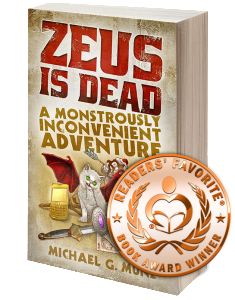 Now available as an audiobook as read by award-winning narrator Travis Baldree!

You probably saw the press conference. Nine months ago, Zeus’s murder catapulted the Greek gods back into our world. Now they revel in their new temples, casinos, and media empires—well, all except Apollo. A compulsive overachiever with a bursting portfolio of godly duties, the amount of email alone that he receives from rapacious mortals turns each of his days into a living hell.

Yet there may be hope, if only he can return Zeus to life! With the aid of Thalia, the muse of comedy and science fiction, Apollo will risk his very godhood to help sarcastic TV producer Tracy Wallace and a gamer-geek named Leif—two mortals who hold the key to Zeus’s resurrection. (Well, probably. Prophecies are tricky buggers.)

Read a sample of Zeus Is Dead here!

“Zeus Is Dead is full of laugh-out-loud moments, lashings of sly wit, moan-worthy puns, and a complex, fast-paced storyline. There aren’t very many humorous fantasy murder mysteries out there, especially not as intricately constructed as this one. Michael G. Munz takes a ’What if,’ and runs with it like a toddler with Mom’s smart phone.”

–Jody Lynn Nye, author of View from the Imperium and co-author of the Myth Adventures of Aahz and Skeeve

Quiz: Which Character from Greek Mythology Are YOU?