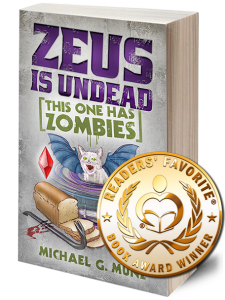 THE GODS ARE BACK. AGAIN. ALSO, ZOMBIES.

Athena’s had a rough eighteen months. Formerly the goddess of wisdom, battle, and crafts, her divinity has been revoked. Zeus no longer trusts her, and a 7-foot ice cream sundae has usurped her position as his bodyguard. But when the dead start rising from the grave without authorization, things start looking up. What better way to prove her worth to Zeus than to solve the zombie problem?

Even so, it sure as Hades won’t be easy. No one knows why the dead are rising, why Zeus can’t eradicate them, nor why Australia remains zombie-free. Meanwhile, the Goddess of Strife is treating Athena like a chew toy. Worse, Leif and Tracy, two mortals whom the Muses insist be involved, refuse to help. If Athena can’t smack some sense into the situation, she may well become undead herself! (Also, global zombie domination, mortal extinction, no more football, et cetera. Bad stuff.)

At long last, it’s a hilarious return to the irreverent, award-winning fantasy world of Zeus Is Dead. Greek gods in the 21st century meet brain-munching cadavers in Zeus Is Undead: This One Has Zombies!

“A master of plausible absurdity with a deep knowledge of Greek myth, Michael G. Munz previously appeared on the literary scene in his first humorous fantasy novel, Zeus Is Dead: A Monstrously Inconvenient Adventure. His newest outing is, reasonably, Zeus Is Undead: This One Has Zombies. With a clever turn of phrase and knowing winks at his readership (whom his narrative voice often addresses directly; he breaks the fourth wall so often that it has been condemned by the NSA (Narrative Structure Authority)), Munz treats us to Greek gods with a keen eye for public relations, a meta Hollywood movie production, immortal sibling rivalry, the aforementioned zombies, and a whole new meaning for the phrase, ‘a divine ice cream sundae.’ If you want to exercise all the laughs in your repertoire from titters to BWAH-HA-HAs, pick up Zeus is Undead.”

–Jody Lynn Nye, author of View from the Imperium and co-author of Myth Adventures of Aahz and Skeeve

“If you liked Zeus is Dead, you’re going to love Zeus is Undead. A witty and entertaining adventure into the world of geeks, Greeks and undead freaks. It puts the Zing! back in Zombie Killing!”

Read a sample of Zeus Is Undead here!

Click here for all blog posts related to Zeus Is Undead…