But the technology cannot yet create a snazzier logo. Sorry.

So far, my high-tech quantum-tunneling doowhatsit continues to find fictional characters to interview without imploding the universe. This time around I actually caught the attention of someone out there who deals with people who risk damaging reality in dangerous and irrational ways.

But that’s not me. Right? Right.

His name is Michael Bishop, and he claims my knowledge of him and his organization will soon be wiped from my memory. I guess we’ll see about that. But in the meantime, I managed to get him to talk…

Michael G. Munz: Let’s start with the basics here: Who are you?

Michael Bishop: Michael Bishop, Asset 108. Not Mike, no matter what you hear. No middle name, which is something I’ve never really thought about. I save the world and reality itself from dangerous Irrationals for a secret organization that you are going to forget I mentioned very shortly.

MGM: It’s a good name! (But please, no messing with my memory.) What are the names of the books in which you appear? What are they about and how do you fit into the story?

MB: So far, the dossiers that have been made public are Rationality Zero (Dossier I63-1998) and The Primary Protocol (Dossier K91-1998). With the release of Aberrant Vectors (Dossier I88-1998) this Friday, there will be a total of three official documents available.

I do not suggest reading these, of course. People who become a liability to the Facility often lead short, but interesting lives.

MGM: But…I’ve already read the first two. Remind me to get my affairs in order after this interview, will you? But first, tell me this: Have you got a motto? If not, and someone put a gun to your head and demanded you choose a motto, what would it be?

MB: A motto? Like, something that I yell at tentacle monsters before I shoot? In my most recent horrific adventure, “punch through” and “fluid” quickly became themes.

Truth be told, however, I’ve recently become aware of exactly how many F-bombs I drop. Does that count? 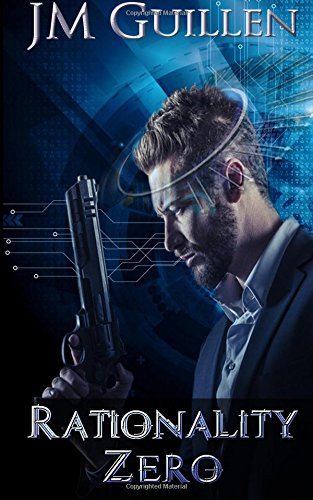 MGM: I don’t think that technically counts as a motto, no. But such awareness can often be a strength. What would you say is your greatest strength? Your biggest weakness? (Does this feel like a job interview yet?)

MB: I’ve never had a job interview, thanks to the Facility.

MB: As an Asset, my capabilities are quite variable. As far as strengths go, this means I can equip a stunning array of reality-altering technology. I can be a master of stealth as easily as I can be an instrument of war. Therefore, my greatest strength is flexibility.

My greatest weakness is probably Wyatt Guthrie.  The man is one part genius, one part redneck, and seventy-two parts smart ass.

MGM: If you could have one wish to be instantly fulfilled, what would it be?

MB: That’s TOUGH. I have an amazing life. At least, when not on assignment. When active, it all goes to hell.

It might be nice to have a little free time where my true personality wasn’t dormant. As a “sleeper” Asset, I don’t quite experience the world with the same freedom that everyone else does.

MGM: So far I’ve had a chance to read the first two books you’ve been in, and I have to say, you get plunged into a whole lot of horrific stuff on a regular basis. What’s the most screwed up thing you’ve ever experienced?

MB: Heh. I just gave a quote about this: 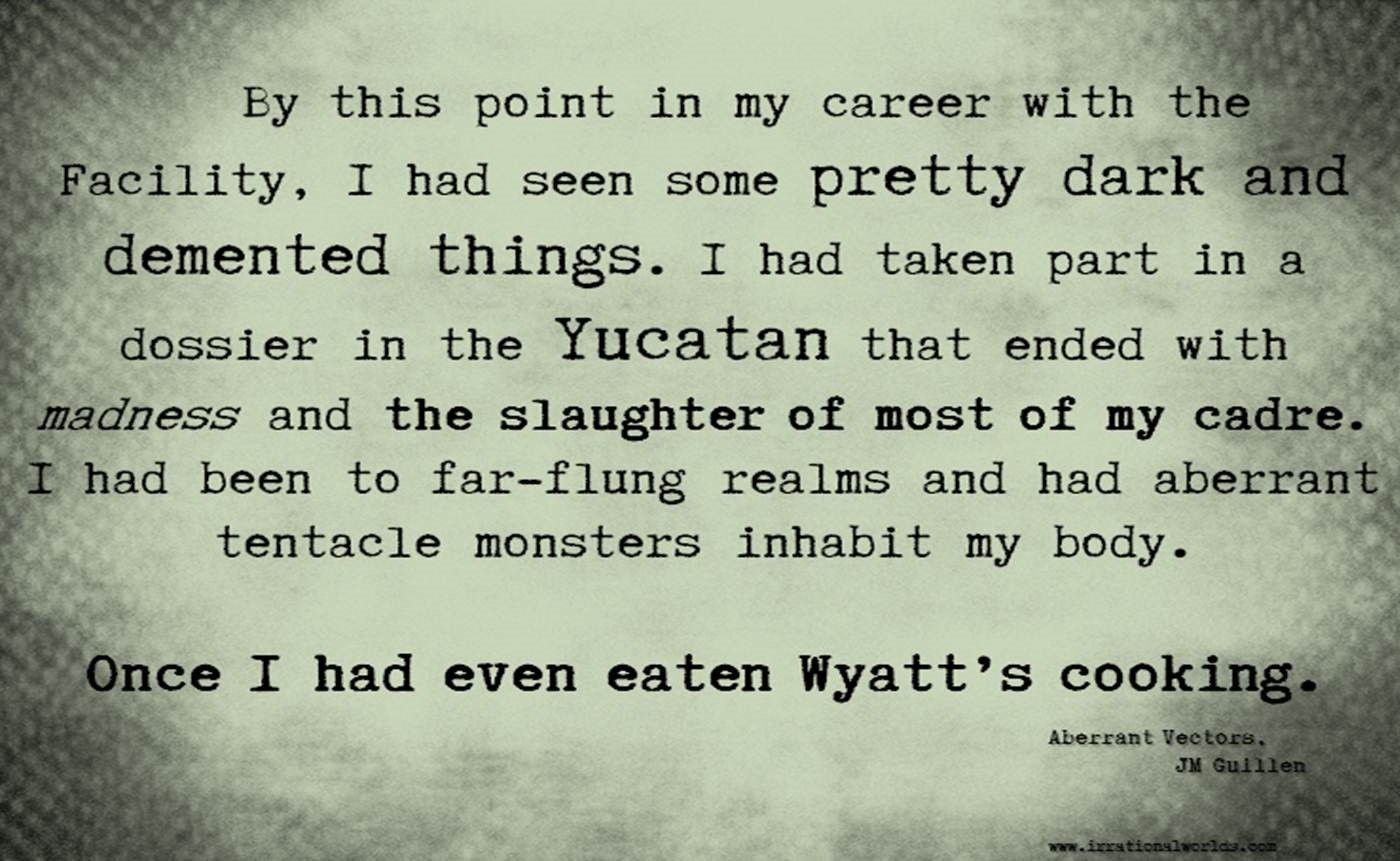 MGM: Remind me not to accept any dinner invitations from Wyatt.

MGM: If your books became a movie or TV series, who would you like to play you?

MB: Have you seen the new Blake Runner flick? I was watching it before getting swept away into my recent unpleasantness. THAT guy. Slick, suave, always makes the right moves.

Is that Jason Statham? I can never keep up. 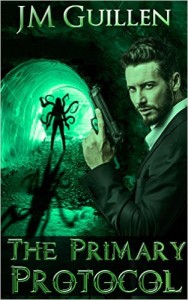 MGM: I’m deducting GeekPoints™ for that one, sir, and moving you into hot-seat time: What do you think of the author? (Ignore, for the moment, that he’s rumored to be a mad genius bent on world domination and may destroy you for any ill-received comments.)

MB: I cannot discuss current Facility investigations or Irrats under suspicion. Rest assured we are looking into the affairs of Mr. Guillen, particularly involving his associations with extra-planar intelligences.

MGM: Well in that case, what would you have Mr. Guillen change in the books you’ve been in, if anything?

MB: These books are just getting longer. The newest one is three times as long as the first. Guy needs to get away from his keyboard once in a while. Go outside. Kiss his girl. Give me a break already.

MGM: As far as you know—and without giving anything away—will we see you again in future books?

MB: I keep hearing something about “fifteen years of stories,” as in, the fans have sussed out proof that my story has to continue for another fifteen years. Something about looking at the time-lines in the books?

Mr. Guillen has all kinds of odd insanity hidden in these stories. Some of it you really have to look for.

MGM: Having read some of his other work, I have to agree with you there. But now I’ll end with one thing I ask everyone here: This website attracts geeks. Putting aside the fact, for the moment, that geeks are cool and everyone knows it–and your previously deducted GeekPoints™–what do you think about geeks? Do you have a geeky side?

MB: You know, I don’t have one, not really. But there is an Asset I work with who’s trying to educate me to the geekier side of life–she’s the reason I’ve been on a Blake Runner kick recently.

So I’m learning. I imagine that eventually, I’ll know what the Star Wars are and why Klingons fight in them.

MGM: I– That’s not really– Okay, you know what? Sure. Soon you’ll eventually know that. I’m feeling a headache coming on. 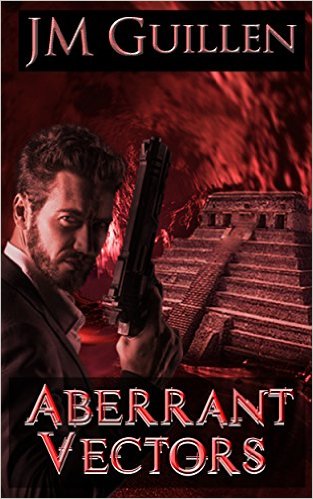 Michael Bishop comes from the twisted mind of one J.M. Guillen, whose third book featuring Bishop, Aberrant Vectors, comes out this Friday.

See my blog for reviews of the first and second book in this series, Rationality Zero and The Primary Protocol, and visit Guillen’s Facebook page for even more…