Best logo I could do on short notice. I’m not made of logos, people!

Hello everyone, and welcome to a new kind of post here on Geek Notes!

Using high-tech quantum-tunneling equipment that has both the ability to burrow into an alternate universe AND make high-quality gelato, I am now able to open up a wormhole just stable enough to allow what you and I consider to be “fictional” characters into the Geek Notes studios so that I can a) interview them about their particular perspectives in a story, b) harvest their alternate-world energies to fuel my ever-growing army of robotic ninja giraffes, or c) both.

Please note: This highly sensitive, secret, and ludicrously expensive technology will never be used to interview my own characters. Heavens no. (There’s a 10% chance each time that the subject’s atoms will be annihilated at the sub-atomic level, and then not only have I got a mess of quarks and bosons all over the place–which do NOT come out of the carpet easily–but the character can no longer be used in any future works of fiction, and I’m not about to risk that with one of MY characters.)

So today I’m pleased to offer you the first ever Geek Notes Character Interview! Let’s all welcome him here to the blog and admire his pretty fur. His name is Toesy. He’s from the Thanatos Rising series by author Tiffany Pitts, and he’s not exactly human…

Michael G. Munz: First thing’s first: Just to make things clear for the readers who can’t be here in the Geek Notes studio to see you (and those of you who are here, just how did you get in here and what do you intend to do with those pitchforks), what are you?

Toesy: That is an easy question. I am a demi-god. I have not always been so, of course. I was born mostly Maine Coon with a touch of American short hair. And of course the Manx, from my mother’s side. But after eating that strange bean, I underwent quite the resurrection. I am now impervious to many things including (but not limited to): bullets, gravity, glass shards, and gastrointestinal distress from eating too many anchovies at once. I live a very charmed life, as you can see.

MGM: Well now I’m envious. So what are the names of the books in which you appear? What are they about?

Toesy: I am glad you have asked this. Double Blind is my first biography. It tells of how I met the Holy Man, Jake Denny, and how I became the demi-god you see before you today. Of course there is more to it than that. There are some villains with guns and a monster in Sock Pants. But my Mistress, Delilah Pelham, and her man-servant Carl the Tall see to most of that. To be honest with you, I thought those parts a little weak. But apparently they were necessary for “ambiance” or some such nonsense.

Wizzy Wig is my latest biography. It chronicles the events leading up to and throughout the evening that the Holy Man decided to mess around with the Universe. The universe, as you are doubtless aware, does not like to be messed with. It was a very dangerous time indeed. The Angel of Delivery almost died that evening! She did not though, for she is a formidable Delivery-Angel. Her pizzas are never cold.

The evening was not without merit however.  I was finally able to introduce myself to the small squirrel-opossum in apartment 2C. Her name is Pansy. And surprisingly, she is not made of sugar no matter what anyone calls her. She is an excellent glider though. That part is true.

MGM: Tell us more about you. How do you fit into the story?

Toesy: I am not sure I understand you. How do I fit into what story? This is a story about me and the events leading up to my spontaneous deification. I am the story, sir.

Well, I and my Executive Wartime Consigliore. His name is Steve. He is very good with numbers.

MGM: Oh, come on, Toesy, be honest, here. I’ve read Double Blind, and there are other characters with a fair bit more page-time than you.

Toesy: If you insist. There is also a bit about my Mistress’s brother being kidnapped and how she must go save him. But honestly, this is not unusual. That man is always getting himself into some sort of trouble.

MGM: Fair enough. But now it’s hot-seat time: What do you think of the author? I mean, forgetting that she can technically drop a rock on you at any time and you couldn’t do anything to stop her.

Toesy: Do not be so sure on that point, Mr. Munz. She may be funny but we all know it is I who holds the can opener here. I have thumbs now, I’ll have you know. I can open doors. And as far as I am aware, Tiffany Pitts has never even killed a mouse. Where do you start with someone like that?

MGM: When did you first realize you were a character in a book? How’s it feel?

Toesy: It feels natural to have such epic ballads written about myself. Did I not tell you I have thumbs? 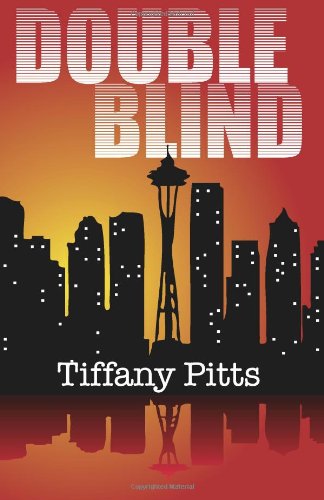 MGM: I have thumbs, too, but you don’t see me getting ballads written about me. But I guess that’s my own problem. Back to you: As far as you know—and without giving anything away—will we see you again in future books?

Toesy: I stand stridently against any sort of shenanigans, tomfoolery or flim-flammery. In my experience, there is always someone willing to try their paw at funny business. I am certain there will be more of it. I can feel it in my whiskers.

MGM: What changes would you tell the author to make to the books you’re in, if any?

Toesy: I would say edit out all the other parts. No one cares about the humans in these books. They are merely accent filler to my own story.

MGM: If your books became a movie or TV series, who would you like to play you? Or, at least, voice you?

Toesy: I feel that Andre Braugher has the appropriate gravitas and merit to become my human embodiment. It is possible he is deified in his own right. I would not be surprised to hear that this was so.

MGM: Let’s get a little more personal: Describe a perfect day for you.

Toesy: Tuna. I am no philistine.

MGM: I didn’t mean to imply otherwise. I’d like to thank you for stopping by today and gracing us with your thumbful presence, but let’s end with one final topic before you have to go: This website attracts geeks. Putting aside the fact, for the moment, that geeks are cool and everyone knows it, what do you think about geeks? Do you have a geeky side?

Toesy: Well, I really like walking on their keyboards, if that is the type of thing that you mean. I find the clicky-clacky sound they make very satisfying. Their first person shooters can be fun to watch too – even though the human players are not very well versed in the predator/prey relationship and often make mistakes. Other ‘geeky’ things I enjoy include napping on textbooks, eating science experiments, and teleporting throughout the infinite dimensions of the Universe.

Toesy, loath as he may be to admit it, is a creation of author Tiffany Pitts. You can read more about him in Double Blind and the newly-released Wizzy Wig, books one and two of the Thanatos Rising series.