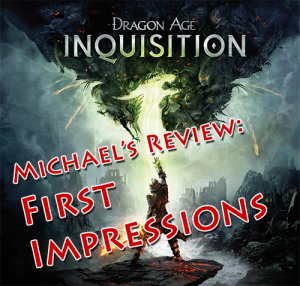 TL;DR: Not without issues, but worth playing so far!

I really had intended to let this game simmer out there in the world for a while before picking it up. I really did. I pegged Dragon Age: Origins for one of my Top 5 PC Games of the Last Five Years–a taste of an RPG style we hadn’t seen since the days of Baldur’s Gate 2. Dragon Age 2…well, it disappointed me and a lot of other people. The tactical aspects were blunted, the maps were cloned all over the place, and the story put you in charge of a character cursed with the inability to have much of any effect on the world. That’s not to say I hated DA2. I enjoyed it enough to play it through with at least two different characters. But it was a step down from its predecessor.

So, like I said, I figured I’d wait rather than pick it up on release day. Except then I started reading some early reviews. People on Twitter started talking about it. And, most dangerous of all, I just plain knew it was out there, available. My willpower sucks.

I picked it up the day after it came out.

Between reading, writing, blogging, and work (along with binge-watching Community for the first time and at some point doing some laundry), I haven’t had a lot of time to play it. Eight hours? Ten? Hey, that’s not a lot for an RPG! (Plus I think about an hour of that was just trying to decide what sort of character to make.) But someone asked me when my review would be up, so here are my impressions so far. 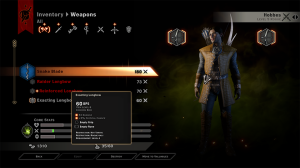 Meet Hobbes: Name from a tiger, personality influenced by Daniel Jackson of Stargate…

The short version: I’m liking it! At the moment I’m playing a human rogue(archer) on the PC version. I’ve no regrets yet about buying the game, but I do have some nitpicks. But first…

This game feels big. DA2 kept you mostly confined to Kirkwall with a few field trips. DAI is, so far, much more open. No repetitive areas like DA2 yet. The landscape is beautiful.

The story is engaging, and the character interaction feels worthwhile. I’ve only run into the first 3 playable NPCs yet, and none of them are really jumping out at me so far, but nor do I dislike them. I was worried that DAI would focus solely on the mage/templar war, but it’s only an element of the story, and I like that. 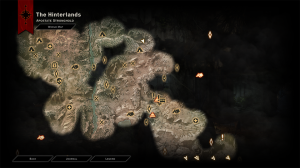 Lots of quests everywhere, and it’s fun to explore. (Did I mention this game feels big?) I like the Astrariums, or whatever they’re called. I should probably look that up.

The power/influence system, which you use to spread the influence of the Inquisition so far appears to have an actual effect on the game, and adds a layer to both gameplay and story. The “Inquisition” feels like something of a misnomer. Cassandra needs to hire a P.R. guy.

The interface has some problems, or at least it’s taking some getting used to for me. I’m not sure how much of my trouble with it is related to the interface itself and how much is just my own learning curve. For now, I’ve got a wait and see approach as I learn more. I want to get over the resistance to change that I know I have whenever I learn a new game before I pass judgement. That said, I’m having a little trouble controlling everyone, and having to walk up to a chest and THEN click on it in order to search it is a bit cumbersome. 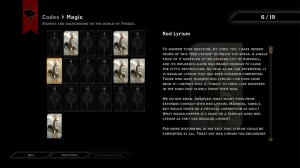 Finding the topic you want in the codex should not be akin to playing “Go Fish.”

This kind of falls under interface, but I want to specifically mention the game’s codex: Whoever thought it was a good idea to list each codex entry with a little untitled card so that you have to click through each one in order to find the one you want to read is…not our friend. At least they’re sorted into categories, but sheesh. This has been a problem with the whole Dragon Age series, if I remember right. You did this right in Mass Effect, Bioware. What gives?

The Ugly (i.e. stuff that’s different but I may wind up liking)

There appears to be little to no healing magic, at least in the sense of spells. (You can heal with various potions and such.) Instead the focus is on spells for not getting hurt. It’s an interesting approach–even if it does create a bit of a story disconnect given that healing magic used to exist in this world–and one I think I can get used to.

There are mounts in this game, and it looks like quite a selection, once you find them. But it’s weird that when I climb on my horse, the rest of my party vanishes into a pocket plane or something, only reappearing when I dismount.

That big-ass green hole in the sky. (Sucker’s just ugly! But, ya know, what else would you expect from a badness-spewing portal? Aesthetically, it’s actually kind of pretty. But I’m sure people living in Thedas find it ugly and scary. And I was kind of using this bullet point to make a joke that’s kind of fallen flat, so I’d like to stop now…)

So that’s it for the moment. I’m leaving out a lot of things, but this post has already gone on longer than I intended for a “first impressions” review. Besides, I have to get back to the Hinterlands. I need to see a man about a horse. 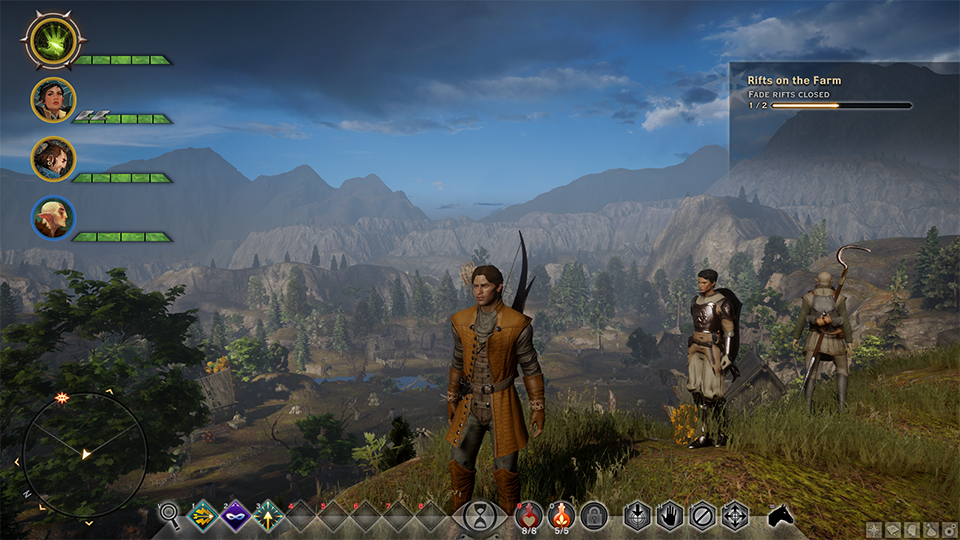 “Okay, guys, we’ll do the photo-shoot for the album cover up here!”