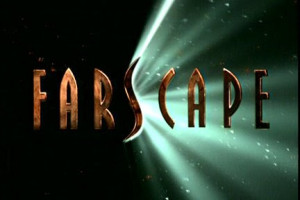 “If you must address me, do so as ‘Your Supreme Eminence.’ Which you should be doing anyway.” [1]

Rygel gets kidnapped and ransomed by the some aliens called Tavloids[2] who use specialized drug-injecting armband weapons. Had Rygel not swallowed an important gemlike circuit vital to Moya’s propulsion (note to the crew: pick up a spare on the next commerce planet!), he likely would’ve been left behind.

This is my favorite episode up to this point. Not too high of a bar yet, I admit, but it’s got a decent enough plot, action, humor, good character beats, non-humanoid aliens and, unlike I, E.T., a sufficiently alien-looking world. It’s curious how such a simple thing as tinting the leaves blue can have such an effect. All in all, very Farscapey. Especially because after all of the running around and fighting, John finally winds up getting Rygel back with a “Stop! We’re too pathetic to pick on!” argument.

I think my favorite bit is the B-plot (or maybe it’s more accurately the A.5-plot.) Zhaan helping the young Tavlek deal with his drug withdrawal and trying to get him to quit the gauntlet is an interesting show of how compassion and strength aren’t mutually exclusive things.[3] It truly seems to surprise the boy that she cares and doesn’t hate him.[4] In what we’ll discover is typically Farscape fashion, the boy doesn’t wind up listening, but Zhaan’s efforts are no less laudable for that.

This episode also gives us a couple of D’Argo firsts: He shows his Qualta blade is also a rifle[5], and we find out that you have to beat the crap out of an injured Luxan until the blood runs clear or he’ll die. How that particular quirk survives the evolutional process, I have no idea.

Other Comments:
This episode has some weird alien-techno music punctuating some of the action, much like the pilot; it’s a hallmark of early episodes.

John has a plan, and it actually works! (Strange, especially given how unlikely it would be that D’Argo would happen to knock himself unconscious on a table.) Of course, he makes up for it later by accidentally overloading a pulse rifle when he’s trying to figure out how to shoot it…

I was going to rate this one 4 stars, but took off a quarter of a star for D’Argo’s line, “My head is pounding like a “Maxzillian Pilater Day parade.”

[1] I was originally going to use John’s Wile E. Coyote line, because it’s easily one of my favorite lines of the entire series. But that’s in the video clip, so I get to have my cake and eat it, too.

[3] “Soft, yes. Weak? No.” If there were a Crew of Moya yearbook, I’m pretty sure this would be Zhaan’s quote.

[4] The scene in which she disrobes and shows him that he’s unable to shock her is classic Zhaan.

[5] One does wonder why he didn’t use it last episode, especially when he was scavenging a pulse rifle from the commandos.