And here we have one of my favorite episodes from the third season. My admiration for it comes from both the horror of the episode itself, and for what it sets up for the future.

But first, the horror! Farscape loves to try on all sorts of hats from time to time, and “Eat Me” dives into the horror of a derelict ship and gives it the sort of twists and flavor that we all watch this show for. Let’s make a list of horror elements, shall we? 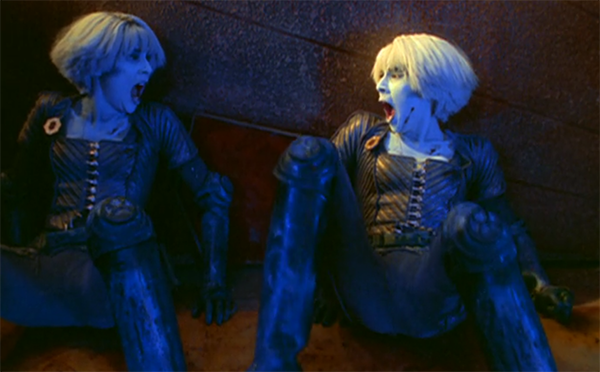 Now I’m not a horror expert. It’s a genre I’m somewhat familiar with, but I don’t usually write it, and about the only horror movies I like to watch are cheesy sci-fi horror or horror with a bit of wit or humor mixed in (I highly recommend Tucker and Dale vs. Evil). Watching people suffer psychologically and physically isn’t generally so entertaining for me. If this episode were a movie with characters I’d never met before, I probably wouldn’t like it as much. (Then again, it would still have the sci-fi element, so maybe I would.) But having it happen through the Farscape lens with characters and relationships I already know is so much more engaging and helps me appreciate things on additional level. Are there things in this episode that could have been more effective in terms of the horror genre in general? Probably, but I’m not the one to point them out.

Well, okay, there is ONE thing I’ll point out: The B-plot on Moya undercuts the effect of what’s happening on the other leviathan by ruining the audience’s isolation. It’s a plotline that is needed to move things forward in the seasonal arc, and the A-plot would likely feel stretched if they had made the entire episode about that, so I understand why it was done. But strictly in terms of maintaining atmosphere, the episode suffered for it. 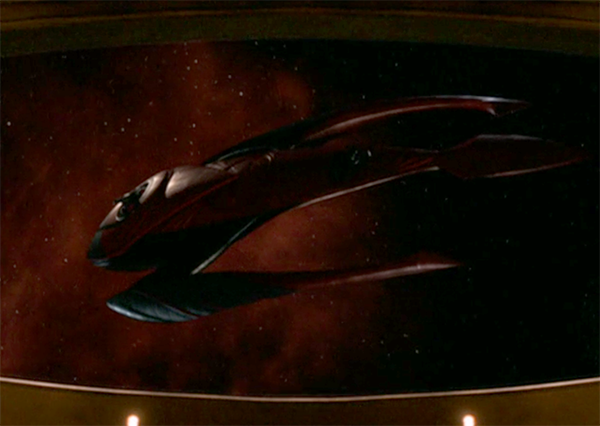 On the other hand, we get to see Talyn again! So I’m good with that.

That said, the writers did do a good job of presenting the Moya/Talyn plot in a similar way to the A-plot by having them come upon Talyn in his own little derelict mystery state. It’s not like Moya pulled up and Crais invited them over to Talyn for a taco party or something.

So! The twinning! I love this whole thing. It could have felt like a cheat, of course: a cheap means to give us the horror of killing characters off without really doing so. And yes, they do milk that aspect quite well, especially after Zhaan actually dying so recently. (As luck may have it, I had my Thought-Captulator 3000 on during my initial viewing years ago, which recorded this direct from my mind: “Did they just kill D’Argo? No, they couldn’t have. Not so fast after killing Zhaan! They wouldn’t! …Right? …Guys?” But then Chiana got twinned and I was breathing a little easier.) 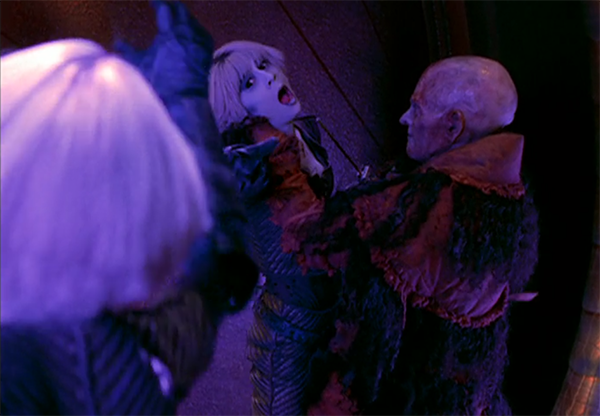 Well, not too much easier, because yeek.

What kept it from being cheap, however, is how much Farscape commits to this. For one, it’s the explanation for why the Peacekeepers formally stationed on this leviathan are now ravenous, mindless animals. For another, Chiana’s terror of seeing herself duplicated–and then seeing herself killed in front of her while she struggles with self-preservation–isn’t just something she shrugs off in a “wow, that was weird, glad it wasn’t me!” moment. But of course it’s the final moments of the episode where we get the full commitment.

Doubling/cloning/transporter-accident-duplicating is a pretty common trope in sci-fi land, but in nearly all of these, it’s over and done by the end of the episode. The double either dies heroically, turns evil and has to be killed, or just plain falls apart due to a flawed creation. (Okay, sometimes the double just goes his own way and winds up in an episode of Deep Space 9, too.) Farscape itself did this in My Three Crichtons. But this time, we’ve got two Crichtons at the end of the episode, both seem to be truly equal, and the show isn’t just going to flush one of them down the waste tunnel before getting a chance to explore the dynamic for a fair portion of the season. Okay, so we don’t know all of this at the end of the episode, but the message of the final scene is clear: it’s not going back to the status quo. Does Farscape even have a status quo? 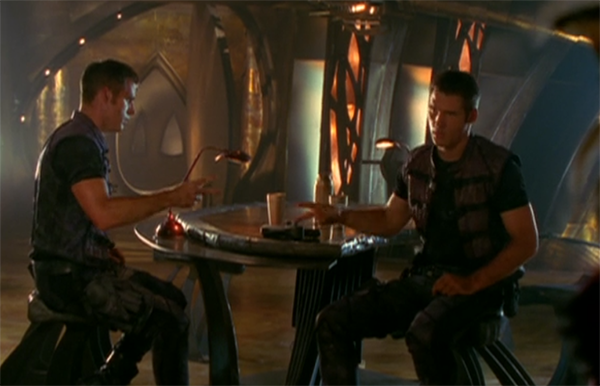 The Rock-Paper-Scissors thing was a perfect way to show that they really are equal.

Other Comments:
As much as I hated Jool at this stage of the show, as I rewatch, I have to admit that I’d probably behaving most like her in this particular situation. In fact, it’s very similar to how I behave on the rare occasion I play survival-horror games. Though I’d like to think I wouldn’t actually try to kill myself.

Amusingly, Crichton pretty much seems to forget about Jool entirely.

A minor nitpick: I realize they were limited to the million-dollar puppet they already had, but I do wish they’d been able to add a little bit to this leviathan’s pilot so he didn’t look exactly the same as Moya’s pilot. 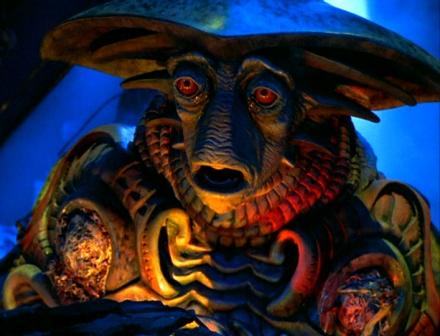