“Bonnie and Clyde! Oh, no, forget about that one. It’s a bad ending.”

And now begins the first of Farscape’s second three-part episode, which begins with a quaint little heist and turns into—well, I’m getting ahead of myself.

As with much of Farscape, this episode begins with an argument. In this case, it’s been three days that Zhaan has had them searching for Stark based on a vision, yet there’s no trace of everyone’s favorite unhinged Stykera. Do they continue to trust in Zhaan, or head back to the slave auction to rescue D’Argo’s son (even though they have no means to buy him and no plan to rescue him)? D’Argo is understandably distressed, and few seem willing to go along with Zhaan any further on this. It’s to the point where if Stark hadn’t turned up right then, they probably would’ve turned around. Fortunately, Stark IS there AND says he’s got a way to save D’Argo’s son!

What could possibly go wrong? 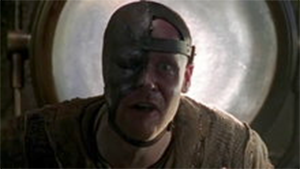 When I first saw this episode, I was excited to see that Stark reconstituted himself. It allowed me to both be right about a prediction I’d made that he would be back—and if you’re following my first-time reading of Percy Jackson, you’ll know I LOVE being right about predictions—and to just see Stark again, because I liked the guy. And yeah, so the prediction wasn’t too wild. Stark did outright say on the hubcap that there’s a tiny chance he might be able to return from dispersal. But I didn’t care, I was taking my little victory.

And yet it seems that being dispersed has taken its toll on poor Stark. He’s easily less stable than he was before. His previously feigned insanity appears to be slipping out of “feigned” territory. He’s edgier, crankier, and there’s a chaos in his eyes that doesn’t feel—to me, anyway—like it was there before.

D’Argo, on the other hand, is still having impulse control problems, and takes off on his own when the rest of the crew thinks it might not be a great idea to immediately rush into knocking over a maximum-security shadow depository, despite Stark’s googly-eyed claim that he’s got all the blueprints and access codes. But that’s okay. Every adventuring party needs a hot-headed leap-before-you-look type to keep things interesting, right? 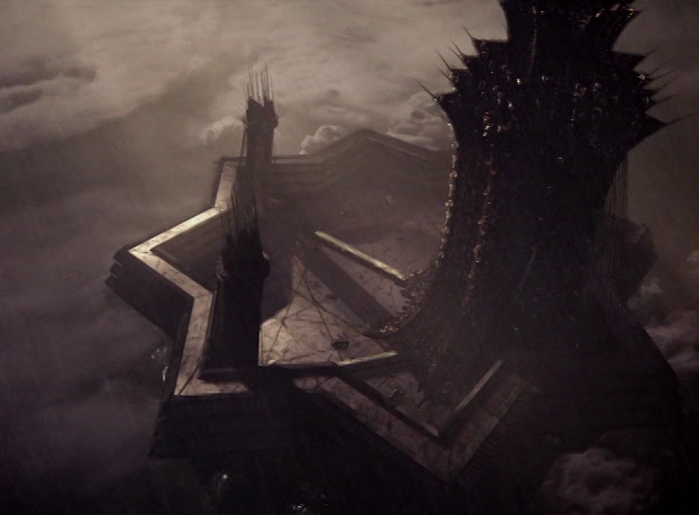 The shadow depository. I’m pretty sure Bank of America is working on building one of these with Comcast.

In any case, D’Argo’s attempt to get into the depository goes about as well as 3-year-old me’s attempts to sneak into my sister’s closet by shutting my eyes so she couldn’t see me. But fear not! (Or fear-do. I’m not the boss of you.) It turns out this is all part of Stark’s plan! 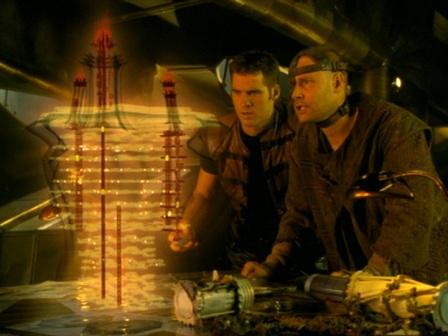 D’Argo’s getting caught meant that the depository would reset their security, allowing Stark to link in unnoticed while they do so. Did D’Argo know this and neither he nor Stark tell anyone else? Or did Stark manipulate D’Argo into doing so without telling him? I’ve never been clear on this, but I’m thinking it’s the latter. Stark spends a lot of this episode neglecting to let people in on what he’s got in mind, after all.

In any case, it leads to Zhaan and Chiana’s wonderful turn as an arrogant space-pirate with no time for your shit, and her loyal-yet-snarky assistant. They play their parts well, and for some reason it just amuses me to see Zhaan in an eye-patch.

It all seems to be going pretty well, and might have even worked if Scorpius hadn’t shown up. But this being Farscape, he did. Adding to the fun is the fact that the neuro-chip in Crichton’s brain has begin actively sabotaging Crichton’s behavior. The episode was already tense with tempers flaring and Crichton further hallucinating Scorpius, and this just makes it worse. Of all the shadow depositories in all the systems in all the galaxy, he had to walk into this one. 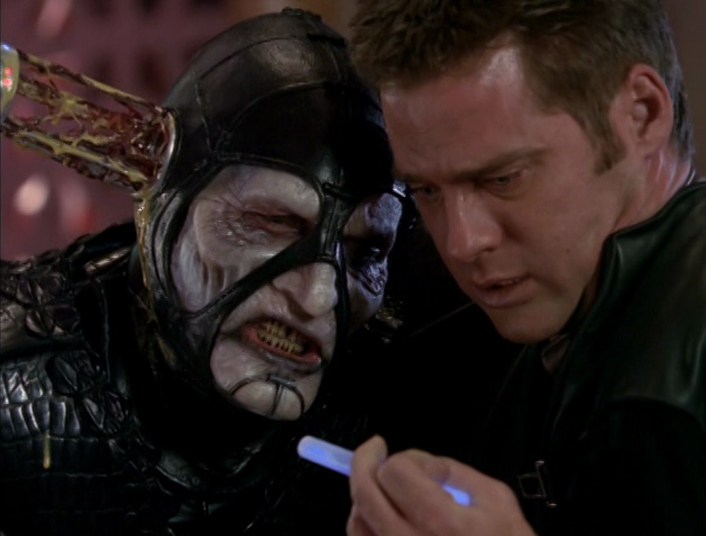 Scorpius and Crichton have a confrontation that’s essentially a battle of wills as Crichton struggles with both Scorpius and himself to insert a cooling rod before Scorpius dies. I hadn’t realized until now that there are undertones of rape in this scene (sometimes I’m a little slow), and I wonder how intentional that was on the part of the writers. Though not actually sexual, it’s most definitely a violation.

On the plus side, once it’s all done (the plan actually mostly works, kinda!) and they’ve escaped from the depository with a king’s ransom in Scorpius’s ingots, D’Argo lets go of his mistrust of Stark in gratitude for what he’s done to help save his son.

Oh, and then it turns out those ingots are actually alive and start crawling out of their containers, secreting acid, and interrupting Beck’s Grammy acceptance speech, because this is Farscape, and nothing is allowed to ever go completely well. But that just makes it more fun to watch, right?

Other Comments:
John pulls a gun on Stark and threatens to shoot him because he thinks Stark might be lying. First-season John wouldn’t have done that. His travels–and the neuro-chip–are taking their toll, aren’t they?

Stark didn’t “exactly” kill the designer of the shadow depository. I’d love to know what THAT means…

Scorpius and Natira have a history. She apparently owes him so much—likely in non-monetary terms—that she could never repay him. That’s another untold backstory that I’d like to know more about. 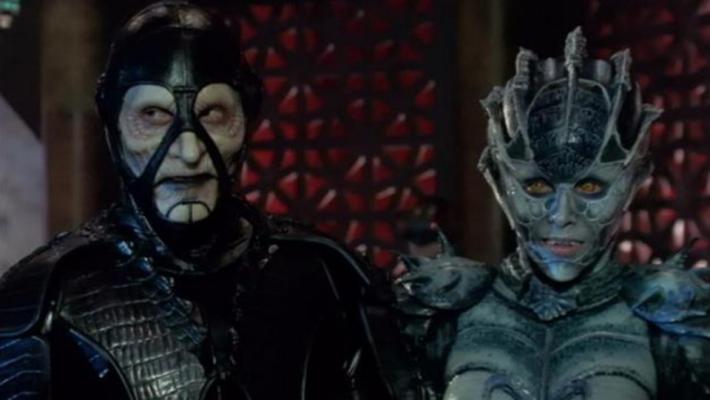 “Have fun storming the depository!”