Warning: Spoilers and such. Also, a severed head.

So things are looking good for the crew of Moya, aren’t they? They’re on their way to buy back D’Argo’s son, and they can afford it! Easy, right? Except, nope! This is Farscape (and we haven’t even hit the opening credits yet). Scorpius bought up the entire lot of slaves just to get D’Argo’s son, and if John doesn’t surrender, the kid dies.

So of course D’Argo rages out again. At first it’s kind of a frustrating, eye-rolling thing for me to experience, because he’s completely irrational in saying it’s all John’s fault. Yet then we learn that part of that rage is directed at himself for considering turning John over in trade. He’s torn between seeing all that’s left of his family die, and betraying his best friend. I like that it’s not an easy choice for him to make, nor one that’s easy for him to live with. D’Argo doesn’t just immediately suck it up and soldier on with a plan to save Jothee. The panic and fear that’s completely natural for someone in this position takes its toll on him at first before he can manage to get things under control.

This is Farscape. Characters bleed. 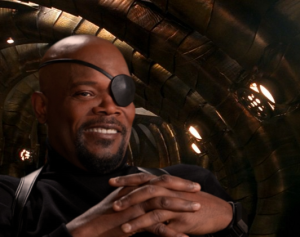 Assembling a team of misfits? Nick Fury would be proud…

So what’s the solution? ASSEMBLE A TEAM! A bunch of mercenary criminals from the first season are drafted for an assault on the depository to rescue Jothee. Vorcarian trackers. A Sheyang. A Tavlek. And the Zenetan Pirates! Plus they throw in a free bonus: Durka! For one scene! And then Rygel kills him! I love how he shows up just long enough to make us all go, “Oh, CRAP!” followed by an immediate reminder to never underestimate our favorite deposed Hynerian.

In fact, this episode is what the writers of The Simpsons would call “a big ‘screw you'” to the audience, but I mean that in SUCH a good way. Essentially, the conflict is set up, there’s a plan to overcome it, much work is spent on getting all of the pieces in place, and then WHAM! Something else happens and the house you just built gets blown away. 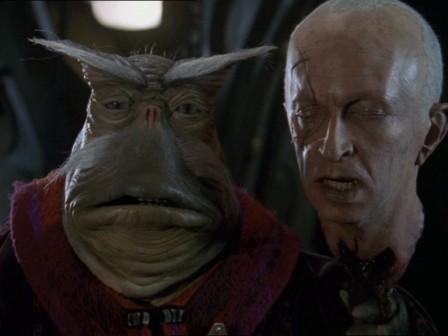 Okay, so I’m maybe mixing metaphors here. Deal with it. I’m over-tired and triple-caffeinated! But Farscape is great at these sorts of things (pulling the rug out from under us, I mean, not mixing metaphors). That scene in The Shining when the caretaker is coming to the rescue and gets axed? Same thing.

The resolution to the metalite problem is as traumatic for us viewer-types as it is for Pilot and Moya. (Well, okay, that’s probably not anywhere near true, but…) Zhaan’s desperation to find a way to eradicate them ties in well with her role as Moya’s official protector. Burn Moya to save her. (In other words, leviathan chemotherapy.) Would Pilot have trusted this sort of solution in the first season? Zhaan tries to put it off for as long as possible, but when does Farscape ever allow an easy solution? It works, but it’s in no way simple. 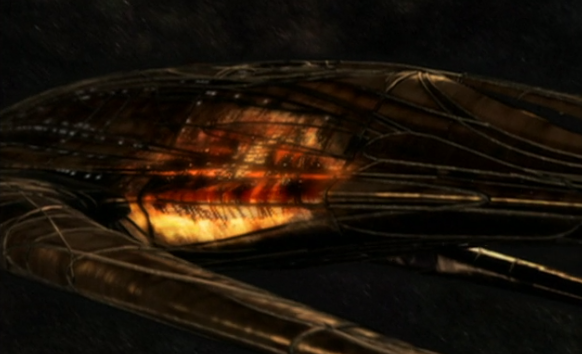 Moya’s got a fortune’s worth of ingots burning a hole in her pocket.

Plus now they’ve got all of these criminal thief-types on Moya, getting paid to work together (hey, isn’t this how Leverage got started?), but there’s no longer any cash to pay them with. Oops. But then some good news! Now Jothee’s landing on Moya! Happy father-son reunion after he’s somehow escaped on his own!

Except he didn’t. John turned himself in. Out of options, with his friend’s son’s life at stake and the neural chip threatening to send him over the edge anyway, it was the only way he could go on.

But of course, the rest of the crew won’t stand for that…

I do enjoy this episode, but I rated it at only 4 stars because it suffers for having to be the middle part of a trilogy. Paired together as one with the payoff in the next part (assuming I remember it correctly at this point), it’s standing would be higher.

Last line(s):
“As if there was ever any doubt.”

Other Comments:
Scorpius said Natira could have the rest of the slaves. Then suddenly they’re all dead. What happened there?

Natira observes that Scorpius reserves thoughts of vengeance for the Scarrans. She took him in when he was young. Again, I want to know more about what happened there! But I so very much did not need to see him having sex, even if he was fully clothed.

After D’Argo rescues Rorf and Rorg from a Peacekeeper “termination squad,” he says, “Come with me.” It’s kind of a shame that he didn’t add an “if you want to live” on the end of that.

You know, this may be the only time Zhaan actually has words with Scorpius.