“I always thought I was the good guy, Chiana. But it was the least developed one of me, the one I thought least likely, who did the right thing. Somehow you knew.”
“I know you.”

A glowing energy sphere-O-mystery penetrates Moya and absorbs Crichton, then spits him back out along with two additional versions: one devolved, one evolved. Oh, and the sphere demands at least one of them back or else it’ll suck all of Moya into another dimension. This would be bad.

I wasn’t terribly excited to be watching this episode again. It’s not bad, just mediocre. It feels like an adapted plot from the original Star Trek series, though the Farscape characters are still acting in-character, so that’s not exactly a bad thing. I don’t think anyone on the Enterprise would be pulling out a phaser and threatening to shove the first Kirk he sees into the sphere the way Rygel does. As I write this, I find myself thinking that what hurts the episode is just that it’s a little too self-contained. Nothing really changes at the end [1], and while there are of course other Farscape episodes of that nature, they at least have a little more of a Farscapian flavor to them.

Or maybe I was just tired when I rewatched it. Who knows?

It is interesting to see how the characters react to the individual Crichtons. Zhaan quickly despises evolved-Crichton for his coldness. Rygel is as pragmatic and self-serving as can be, and just wants the whole thing over and done with. Chiana, meanwhile, is at first proto-Crichton’s only advocate. I wonder, does she help him because Crichton did the same for her when no one else wanted to take a chance on her[2]? 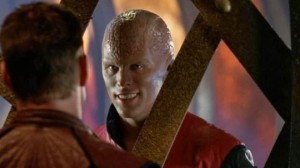 While watching this time, I noticed that evolved-Crichton looks a bit like Jake Busey. Now I can’t un-see it.

There’s a weird fish-eye lens effect used for some shots of Pilot in this episode that I don’t recall ever seeing before. It’s an interesting idea, likely to try to make things feel a bit more chaotic, but I’m not sure how well it works.

——
[1] Though, really, did we expect they’d have TWO Crichtons in the show for more than one episode? That could never happen! 😉