Cover your ears. Jool has arrived.

I’m sorry to say that I lost all of my notes for these two episodes when my laptop died, so unfortunately this two-parter won’t get the attention that it deserves. It’s a great little thriller, on top of which it introduces a new shipmate (shrill and annoyingly petulant as she may be), and, most wrenching of all, takes Zhaan away from us. But I can’t put it off any longer, so let’s dive in and take these two episodes at the same time!

Neeyala and her Pathfinder buddies
I like everything about the design of this culture, from the poisonous spines, to the draconian policies with which their research is enforced (if they don’t succeed, their families are murdered?!), to the way Farscape manages to make these aliens even more alien: they don’t have translator microbes. I was swept up in Crichton’s wormhole-driven need to trust them, both upon my first watching and this time around (I’d forgotten just how things unfold), so while I didn’t feel they were being completely on the level, I didn’t even suspect that they were sacrificing themselves in order to invisibly sabotage Moya. Yet with the sword hanging over their families’ heads, can we really blame them?

Far be it for me to judge another’s culture, but what the heck, they’re fictional: That is fucked up.

Side note: Are her people called “Pathfinders,” or is that her own particular rank? While Crichton will later refer to her people as Pathfinders in season 4, I don’t think her species is ever named definitively, but correct me if I’m wrong.

Joolushko Tunai Fenta Hovalis
I scream, you scream, we all scream for Jool to SHUT UP! Okay, I’ll lay this one out right up front: Jool is my least favorite recurring character on Farscape, bar none. (Well, okay, so she’ll get a little competition in season 4, but I’ll burn that bridge when I get to it.) Of course, it’s not as if she’s introduced in a very sympathetic way. She’s condescending, she’s loud, she’s insulting, and she screams at the drop of a hat. She pisses off most of the crew upon her introduction (when Zhaan yells at you, you know you’re being a brat), and so she’s really got no help from the crew in terms of finding sympathy from the audience. In hindsight, she’s clearly there to stir up the pot. 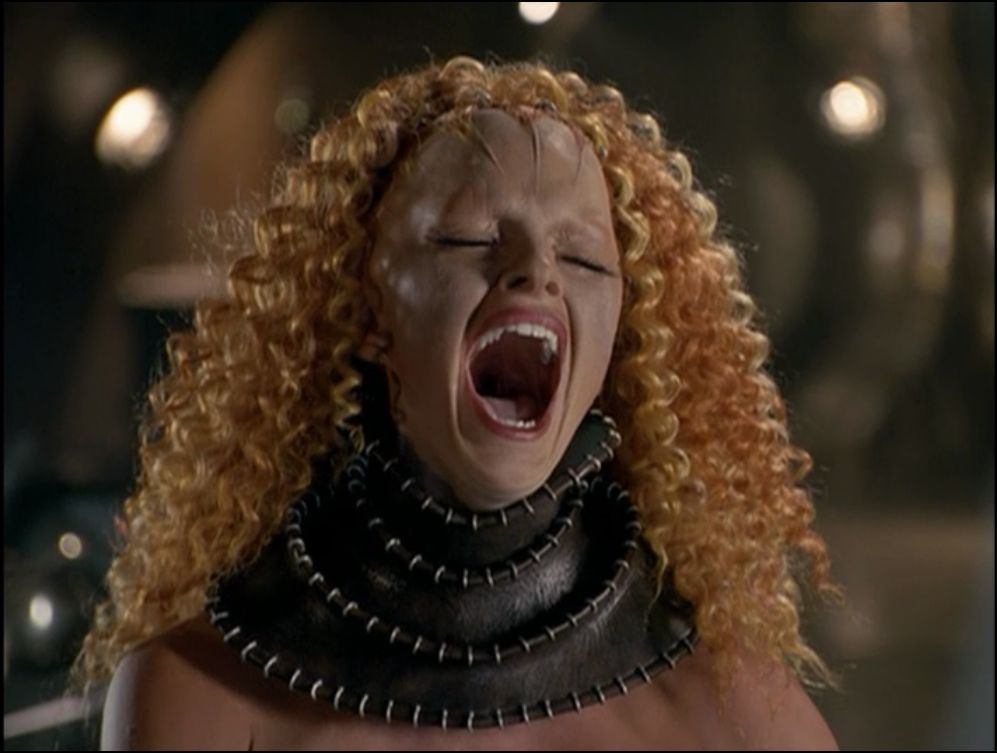 Yeah, she kind of grows on you eventually. But still…

To be fair, being kidnapped and stuffed into a cryo-chamber in order to be harvested for parts at some later date (likely when she was perfectly healthy to begin with–not that it’d be okay if she wasn’t if she didn’t consent), only to wake up on a ship full of escaped criminals to find your cousins dead and yourself in the midst of a crisis that is likely to kill you, too is going to stress anybody out. I really should cut Jool some slack. But I don’t wanna. The fact that we wind up being forced to trade Zhaan for her didn’t help my view of her originally.

Zhaan
I hated seeing Zhaan go. When this ep first aired, despite all the signs, I was in denial right up to the very end, hoping that Stark would somehow sacrifice himself in her place so that she’d be able to get to the planet to renew herself. Zhaan is, after all, the heart, compassion, and wisdom that holds the dysfunctional Moya family together and keeps them from going nuts. The spiritual journey–finding the balance between compassion and strength (or more accurately, combining the two) was always interesting to me. The character was, at times, a little under-utilized, but that’s what happens on a show with so many good characters, I suppose. Yet as much as I hated to see her go, Farscape gives her an excellent send-off. 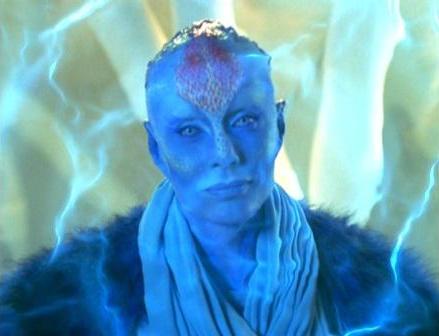 Over the course of the two-parter, Zhaan gets a defining moment with every character aboard Moya. Each one reminds us how much she affects those around her, and what a positive force she is in everyone’s lives. It also accentuates just how badly she’s going to be missed. (And don’t try to tell us that wasn’t intentional, Farscape writers, you magnificent bastards!) In the end, she sacrifices herself in glad-hearted contentment to save them all, and fulfill her role as Moya’s protector. 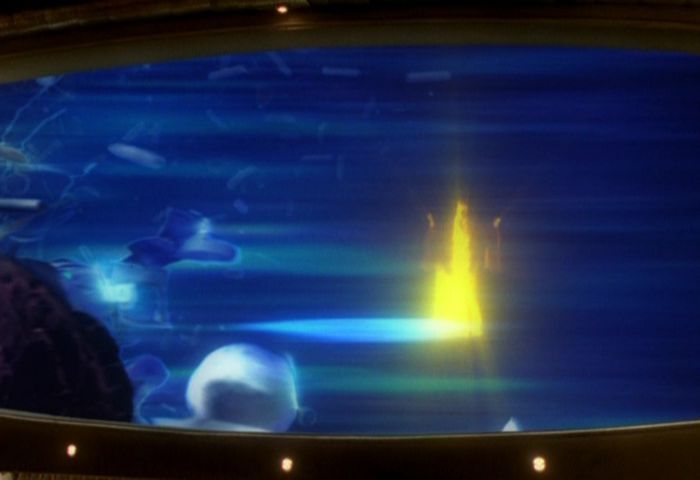 And don’t you think that I wasn’t seeing that little golden aura swirling away as she disintegrated with Neeyala’s ship and hoping she’d show up again some day. Now that she’s gone, this crew’s going to have even rougher times ahead.

Overall, despite ripping away a beloved character, Self-Inflicted Wounds is a pretty good couple of episodes. It gets a little over-technobabbled at times–something that Farscape is usually pretty good at avoiding, but nobody’s perfect–which I think is ultimately what keeps me from wanting to rate it higher than 4 stars. (Am I being too picky?) But it also gives Zhaan a great send-off, even if Jool’s arrival does make me want to occasionally stab my eardrumbs with an ice pick.

Last Line(s):
“Why is it always the gentle ones that pay the price for everyone else’s ambition?”