Zhaan’s dying, Stark’s freaking out, John and Aeryn are trying to figure out the parameters of their non-relationship relationship, Chiana and Jothee are still going at it, Rygel’s watching, D’Argo’s figuring it all out, and some religious zealots are using solar storms and magnets to blow up space stations they dislike and the inhabitants thereon. In short, there’s a whole lotta stuff goin’ on in this episode.

Do we ever find out where this ship CAME from? Some Luxans were hanging around on the station and died in the storm? Suppose they didn’t die and are still pissed that someone stole their ship?

Suns and Lovers is only a so-so episode for me. I won’t go so far as to say that there are two many things going on in this one (though there are a lot), but I think I’d have enjoyed it better if the central plot on which all of the character stuff hangs felt a little less drab. The kids they’re trying to rescue are really more MacGuffins than characters. Hundreds (thousands) of people have died in the storm disaster and there’s very little sense of that. It’s like a pizza with excellent toppings but bland sauce: parts are great, it’s only average on the whole.

We do get some really intense character stuff, though. The biggest is of course the D’Argo/Chiana/Jothee situation finally exploding in a big space-wreck of anger, betrayal, and angst. It’s interesting to see how the experience has actually led to even a bit of character growth in Chiana. Yes, she dealt with her discomfort with the idea of settling down in a very immature way, but she’s starting to realize that. Is it guilt that gets her there? Or is it more to do with watching Jothee’s own immaturity and seeing it from the outside? On numerous occasions we see her irritated with him on that front. It’s not the sort of thing that usually bothers Chiana, and probably speaks something to her own guilt and anger at herself. 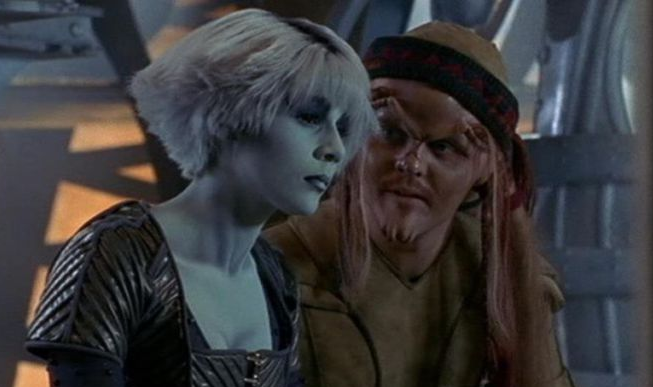 Not pictured: Guy who woke up, threw up, and died…up.

Incidentally, I’d forgotten that D’Argo figures things out on his own. I’d been expecting Rygel to show him the video. I think it works better for the story that Rygel isn’t involved, and that the main thing that tips D’Argo off is just Chiana’s and Jothee’s worried/guilty behavior. Leaving Rygel out of it (save for being able to tip off Crichton) keeps the revelation more focused on just the three characters who are immediately involved.

I should probably mention that I wasn’t sorry to see Jothee go. I understand he’s been through a lot in his life, but the majority of his time on screen was spent doing something that annoyed me. I am glad, at least, that D’Argo got to hear his conversation with Chiana at the end. Their remorse, and Chiana’s motivations, probably at least helped him to process it all and start him toward healing from the experience better than he’d be able to if he hadn’t heard it.

Last line(s):
“Tell my father, if he’ll let you, that I’m sorry, and that one day I’ll return and make it up to you both.”

Other Comments:
Other stations in the area were destroyed as well to where people have started regarding the place as cursed. Makes me think of the first three Babylon stations…

Pilot’s cackling as they release whatshername into space has always weirded me out, and I’ve never entirely understood it. Is the stress finally getting to him?

Now I’m no scientist, but I’m pretty sure magnetism doesn’t work that way…