“Cross my heart, smack me dead, stick a lobster on my head.”

All Crichton and the gang want is to buy some chromextin fluid to heal Talyn, but there’s obviously no way that’s going to go smoothly, and soon both Crichtons are caught up in some planetary politics with the ruling family and the Lobster-O-Truth. Also: A freaky-as-frell-looking red alien thingy. 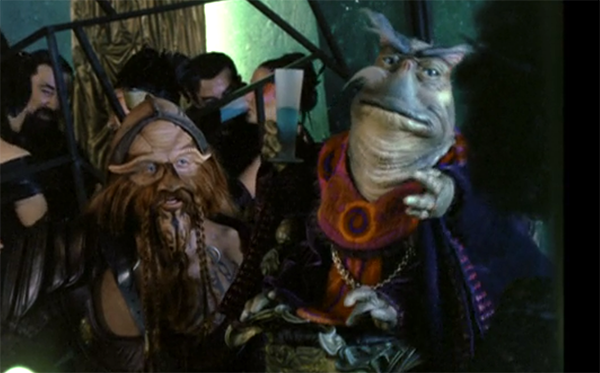 Bit of a coincidence that of all the gin-joints in all of the city in all of this planet, the security director happens to wander into that one.

“Thanks for Sharing” is an above-average episode for my tastes, but it doesn’t knock it out of the park. It’s something of a typical space opera show episode in the sense that they go to a planet and run afoul of its native culture. In that sense it just goes through the motions. Yet the addition of two Crichtons (and Talyn) does manage to elevate above that, giving us some fun situations that we’ll never see in any other Farscape episode. 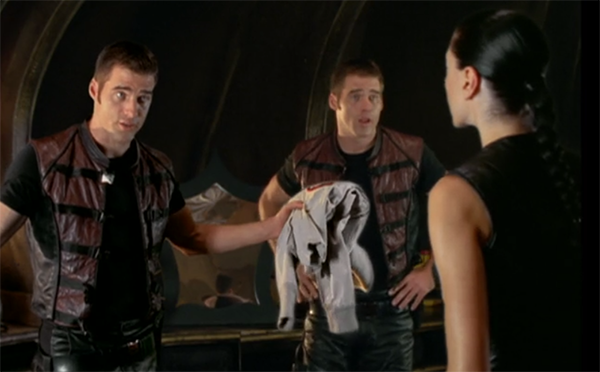 Two Crichtons. And I suspect the writers had fun teasing that one of the Crichtons would die in this episode and bring us back to status quo. Nope!

Can you tell I wish we had both Crichtons on the same ship for another episode or two before they got split up? Having two around adds so many plot possibilities, such as what they did when one got caught in the explosion and the other took his place. But what’s the most fun is seeing them play off each other. Whether it’s having the same idea at the same time in a crisis, or doing a poor job hiding their resentment for the other—for which I can’t say as I blame them; if there were another me, I’d likely react the same…and you can bet I’d be making HIM go to my day job instead of me—this episode (and Ben Browder, pulling double duty) has so much fun with the concept. 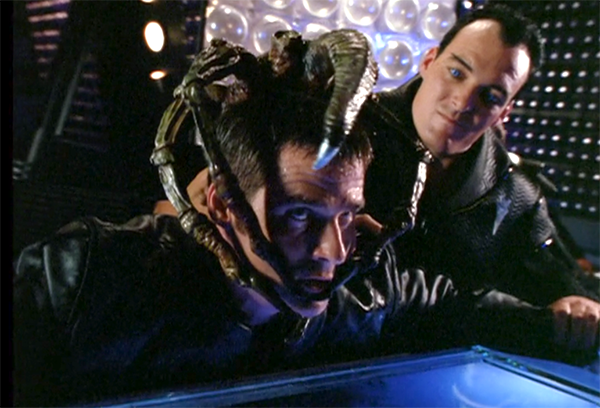 How does a lie-detector creature like that evolve naturally? Was it genetically engineered? It’s not something we ever find out, but I like to think it’s the latter.

Alongside the main plot, we’ve also got the reveal that Aeryn’s mother is leading the Peacekeeper Retrieval Squad sent to find Talyn—not to mention proof positive that Aeryn’s childhood memory of meeting her mother is based on actual facts. Speaking of which, I’d completely forgotten (again) that Crais had no idea that Aeryn was alive again. Bit of a shock for him, that.

So now our heroes—such as they are—are now split into two groups, each armed with their own Crichton, color-coded for our convenience.

Last line(s):
“But I will not let them get Talyn back, even if it means I have to kill her.”

Other Comments:
The leader of this planet is quite patient—and has quite lousy security, given how Crichton and D’Argo are so easily able to toss around his son. (Maybe if the “Security Director” son spent a little more time checking on the security and less time making an ass of himself in bars, this kinda stuff wouldn’t happen.)

I guess taking over from Zhaan as Moya’s protector has led Stark to learn more about leviathans, given his diagnosis of Talyn.

Speaking of trying to fill Zhaan’s shoes, Jool is pulling a little more weight now, what with nursing Crais back to health and doing DNA tests and such. She’s still whiny and self-important, but it’s at least an improvement.

I remember that the bit at the end with whatshername changing confused me when I saw this episode for the first time. I didn’t get that the creature had replaced her after the bombing.