“We should just execute all of you. Then we could be sure the guilty party was punished.”

It’s been almost half a year since the last post in my Farscape Re-watch series, and part of the reason for that is that writing up this particular episode in a way that did it justice was a daunting task. I kept putting it off while working on other things (including writing and reading the Percy Jackson series for the first time) until the immediate memory of it wasn’t as fresh. I suppose that’s even fitting for this episode, come to think of it.

But no more! I’m going to do my best to revive this little blog series, since I do love me some Farscape. So expect at least one Farscape post and one Percy Jackson post from me per week, if not more. (And, of course, keep your eyes peeled for other sorts of geek-related fun…) Wish me luck. 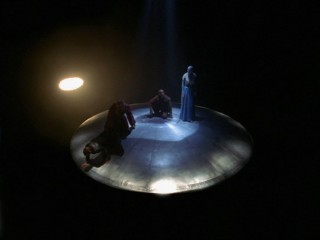 Plus there’s a giant hubcap-of-justice!

I really do love this episode. You’d think an ep that features multiple retellings of a single event wouldn’t lend itself to such rewatchability, but you’d be wrong! Or perhaps I’m just strange. I guess we knew that already. For one thing, we get to see Talyn in the flesh for the first time since Crais absconded with him at the start of the season. (An excellent word, “absconded.” I recommend using it as often as possible.) For another, it’s a blast seeing a single scene multiple times through the viewpoints of different characters who bring their own egos, biases, and attitudes to it–and who may or may not be actively disseminating. 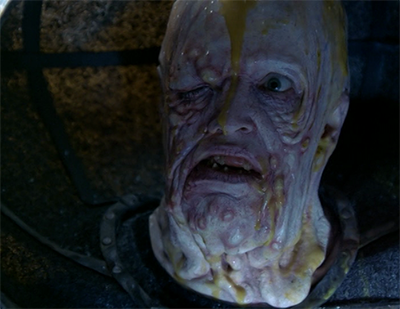 Plokavians: as kind as they are lovely.

All of this comes about because Crais claims that he wants to swap out Talyn’s weapons with non-lethal variants, and he needs Moya’s and Aeryn’s help to do so. For the crew–and the viewers–trying to determine the truth of Crais’s claims mirrors the Plokavians’ attempts to determine the truth of the events that followed. How much is true? How much are we tempted to believe? And how subjective IS “the truth?” I’m not sure if 20 Plokavian witnesses to a car accident really do wind up with the same story, or that’s just something they claimed in an attempt to dismiss Crichton’s defense of why each of the crew has a different account of things, but if it’s the former, it just adds another angle from which to view the narrative.

It’s really a unique sort of murder mystery, with hints about what actually happened scattered throughout each story, and there’s fun to be had in trying to piece things together. (It’d been a while since I watched this one, so I couldn’t remember exactly myself.) But there’s also humor to be had in seeing how each member of the crew sees themselves, their companions, and the situation in general–and how they choose to present that while on trial: Aeryn finds Zhaan spacey; D’Argo puts everyone in a solid formation with himself as the leader; and of course Crichton has everyone calling the Plokavians “Plokavoids.” 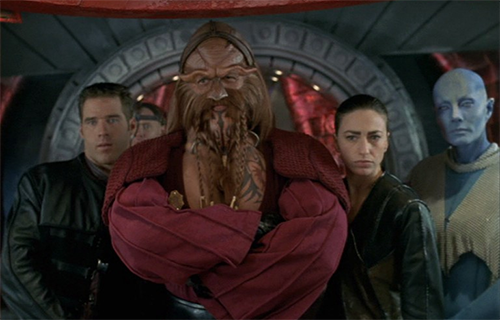 D’Argo’s own Legion of Boom

Personality and agenda conflicts between the crew complicate matters, and the episode mines a lot of tension from not being sure if someone will sabotage another’s story and ruin them all. By the end, Stark claims sole responsibility–it’s what he believes to be true, even though we learn later that it was all Talyn, trying to protect Moya–and accepts “death by dispersal” to protect the others. Sure, he thinks he might be able to return from that somehow, some day, but it’s hardly an inconsequential choice for him.

I remember being pretty bummed out when Stark got dispersed, and I really did hope we’d see him again. I didn’t realize how swiftly we would, nor did I suspect that the dispersal would have permanent effects on Stark’s psyche. But that’s something for another time.

Last line(s):
“Yeah, she says she does. I don’t think she believes it.”

Other Comments:
It’s a shame Chiana or Rygel weren’t on Talyn. I’d have loved to have seen how they’d depict things.