So, yes, to sum up Part 1, Sebacean independent colony, princess with sabotaged DNA who can only have kids with humans, and Crichton trapped between 80 years as a statue/ruler or being fed to Scorpius. Also, Scarrens for the first time. Also Zhaan/Moya/Pilot off on their own. Also D’Argo-Chiana pairings. Also John about to be killed at the end. 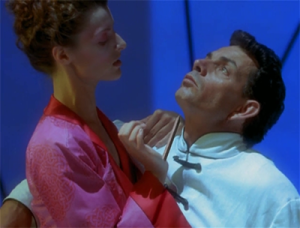 I tried to get a shot where she’s gaboinging around, but she’s extra-gaboingy, so it’s all a pink blur.

The episode wastes no time getting John out of trouble as Prince Clayvor’s fiancee leaps in to kick the crap out of everyone. (Seriously, where did she jump in from? For the first ten seconds of that fight she’s leaping up and down like some sort of ninja-Tigger.) The sound effects for the fight are a bit over the top, but it’s over quickly.

It turns out she’s a “Disruptor. Peacekeeper Special Directorate.” So the Peacekeepers have a spy division, and she’s here to kill Clayvor if he becomes king in order to prevent a Scarran alliance. But why does she assume John’s a spy? Maybe we’re not supposed to think about that.

Despite how I seem to be complaining here, this is another great episode that gets us off Moya and shows us some things we haven’t gotten much of previously. Rygel continues to operate, reveling, in his political element. (And I STILL want to see him in Game of Thrones somehow.) D’Argo continues to be a good counselor to John, deepening their friendship. Also, I’m pretty sure this is the first episode where John and Braca meet each other in person.

Aeryn, for her part, spends much of the episode afraid to tell John that she doesn’t want him to stay. Actually, she spends ALL of the episode doing that. When they talk after yet another attempt on John’s life, it’s clear from the look on John’s face that he would take his chances with Scorpius and keep running with Aeryn if she could actually admit to any of her feelings. (He knows she has them, but the fact that she can’t admit them makes him doubt if taking the risk with her is worth it.) It’s an interesting reversal from the usual male/female relationship dynamic one often sees on TV. 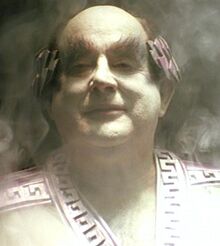 I think he’s an honorary mentat. Seriously, Jonathan, get the trimmers, man.

So if I liked it, why only four stars? It’s that whole Moya subplot with leviathan creator-being Kahaynu (played serenely by Jonathan Hardy, the instantly recognizable voice—and apparently the eyebrows—of Rygel). I like Zhaan and Pilot. I really do. But in contrast with everything happening on the planet, Virginia Hey doesn’t really seem to have much to work with, and it comes off feeling empty.

This three-parter used to be a two-parter, and I’d be shocked to find that this subplot was in there in the two-part version. It’s also got the cringe-worthy line from Zhaan, “I’m so filled with uncharitable rage!” To quote Futurama’s Robot-Devil, “You can’t just have your characters announce how they feel! That makes me feel angry!”

Maybe I should’ve only taken off half a star. After all, the episode does feature some neat little things: 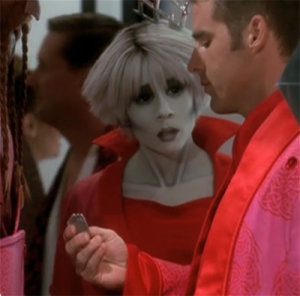 After he’s married, and right before he’s about to be turned into a statue, Chiana tells John she loves him in what feels like a sisterly fashion. John’s reply—after a chuckle that implies the Empire Strikes Back reference is entirely intentional—is, “I know.”

Another favorite moment: “The empress, and by extension, the entire royal family, abhors personal violence.” (SMACK!)

Finally, this episode has one of the first indications that John’s seeing Scorpius in “Crackers Don’t Matter” may not have just been the temporary insanity talking. Scorpius’s voice spurs him to jump ship after he’s bluffed his way out of Braca’s hands. (And speaking of insanity, was that suicidal rant really a bluff, or something more?)

We’re left with a married, statuesque John frozen in a scream of pain just after the funniest lines of the entire three-parter…

Last lines:
“The bad news is that you’re married, and you must endure as a statue for 80 cycles in a strange world.”
“What’s the good news?”
“Chiana and I are having fantastic sex.”

Other Comments:
When I first saw it, I thought John’s suitless space-walk was a bit of a stretch, but when I was writing A Memory in the Black I looked up the actual effects of vacuum exposure and found it was actually feasible.