“I know, it hurts. You want it to not hurt? Well next time, hold onto THE FRELLING WALL!!”

And the third part of Farscape’s first three-parter comes to a close in a (mostly) satisfying way. To summarize: 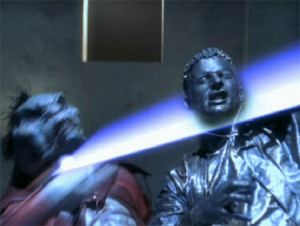 I need one of those things. Because reasons.

John loses his head before the opening credits and spends at least the first quarter of the episode as a MacGuffin while everyone tries to either destroy the head, steal it, hide it, or reattach it. John gets (his) head, the Scarren kills Prince Too-Stupid-To-Live, then gets killed himself, and John escapes the planet after it’s decided that they may as well let the princess’s boyfriend pretend to be John since John can’t re-statuefy anyway.

Aeryn learns a lesson out in the barren lands (namely, gravity is a cruel bitch-goddess, and don’t go climbing with strangers), Zhaan proves worthy to watch over Moya, D’Argo does his best Caped Crusader impression to save Chiana (“How Batman was THAT?”), and we find out Scorpius has some sort of hidden influence on John.

Oh, and also John and Aeryn seem to be biologically compatible, and are reasonably pleased about the fact.

While I feel there’s slightly too much time spent on Aeryn’s climbing expedition out to the Devastator Reefs (which I believe are located south-southeast of the Cliffs of Insanity) and the still-lackluster Kahaynu plot, this is still a great episode. There are one or two plot…issues (3 hours in acid and John’s head is fine? And why doesn’t anyone think to ask Katralla who cut off John’s head?), but they’re minor bumps in the road so far as I’m concerned. 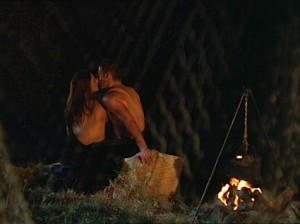 Captain Kirk would be proud.

One thing that did strike me as a bit odd is the whole bit with John sleeping with Jenavian while he’s in hiding. While he’s not really in love with his current wife, he doesn’t seem the sort to cheat even on that sort of relationship. Jenavian is arguably the one doing the seducing, but Crichton’s certainly willing to go along with it. Did he do so to make sure she stays an ally now that she knows he’s not a spy, or just is he just having a bit of life-affirming sex after nearly being killed? (I’m struck with the idea that he’s Captain Kirk being seduced by a female James Bond.)

Despite my thinking Aeryn’s subplot drags a little, it was at least nice to see that Sebacean-Ken (who claims to be rated “expert” at climbing but winds up being “novice” at heights) turns out to have some depth to him. He counsels Aeryn on her feelings for John–which he rightfully points out she runs from because she’s uncomfortable with things she’s not trained to deal with–in a genuinely stereotype breaking moment:

“Emotional pain you wear like a badge. It means you’ve been there. And it can’t get calloused because each fresh hurt stings like the first.”
“And why would you WANT that?”
“Because of all the days before it hurts. The good days, when you’re in love.”

Finally, this episode further develops things with Scorpius. For one thing, we finally get a reason for Scorpius’s outfit and cooling rods. Even better, there are now some definite signs that he’s done something to John. Scorpy tells D’Argo, “You underestimate the strength of the relationship. Even your friend does not yet understand.” Plus John can’t seem to bring himself to kill Scorpius. It’s a great touch when, afterward, Scorpius just gets up, glides his hand through the acid like a cocky bastard, and walks off with a grin. Admittedly, I didn’t understand quite what was happening in my original viewing, but of course in hindsight he was likely just testing the neurochip’s control.

Last lines:
“And I have noticed that you’re not talking to me.”

Other Comments:
That’s some dense acid, given how Crichton’s metal noggin floats in it. Later, the Scarren sinks when he falls in, so I guess Scarrens must be REALLY dense. On a side note, I still love the design of the Scarrens. It’s just a shame they couldn’t articulate his mouth better.

For some reason, there’s just nowhere with less security than the room in which completely helpless planetary regents are kept. Speaking of which, I can’t imagine being stuck as a statue for 80 years, conscious and aware the whole time, without going insane.