“Our parasite problems are solved.”
“Rygel’s decided to leave us, has he?”

This is a simple little episode, perhaps made simpler by its coming right after a three-parter, but it’s not without its charm. It’s also a critter ep (John: “I hate critters!“) with a parasite getting aboard Moya to cause havoc, as sci-fi parasites are wont to do. It’s a fairly standard plot trope for sci-fi, yet Farscape manages to add its own particular twists to make it enjoyable. 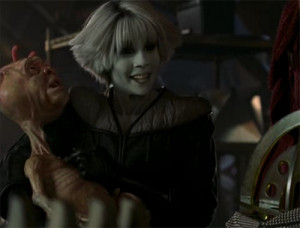 This is also an episode with some of the show’s, shall we say, least impressive creature design with regard to the vorc. Let’s face it, the thing looks like E.T.’s idiot cousin. (John himself makes an “Oouuch” reference later on.) The fact that it moves like its feet are made of wheels—which the puppet’s obviously were—doesn’t help. And then there’s its other “aspect,” which Ben Browder apparently referred to on set as “the Tandoori chicken.” When we finally see the entire thing, we’re instantly certain why it’s been shown only in extreme close-ups and fleeting shots prior to that.

Still, the scene where it goes inside-out is a pretty neat idea. 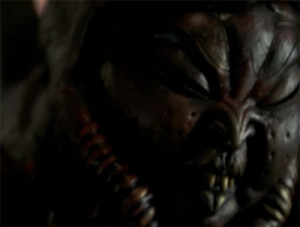 Despite such problems, Beware of Dog is a pretty decent Farscape experience, with occasional twists that keep it interesting and intermittently creepy. I really didn’t see the whole bit with Rygel and the pod coming the first time (okay, sometimes I’m kinda dim), but even if I had, there’s still the nifty idea of injecting translator microbes into the vorc. It lets the vorc understand Aeryn and John, while still lacking the ability to speak in anything but a rudimentary way that Pilot manages to translate.

In other words, they turned the vorc into Chewbacca. And John didn’t even think to make a reference to that!

I sometimes get this with my summer hay fever.

Of course, amid all of this, Scorpius’s neurochip tightens its hold. Aside from knowing Scorpy did something to John, a first time viewer still isn’t entirely sure what’s up: John’s mumbling to himself, flashing back to Scorpius, then seeing him out of the corner of his eye, or right there in front of him.

Even on a rewatch, it’s a little creepy, especially at the end. John tells Aeryn he tried to kill Scorpius but he couldn’t, that “something inside” stopped him. We’re left to end the episode with Scorpy’s smiling specter telling John that he’ll never see it coming. When the trap closes, it’ll be too late…

I started this rewatch out thinking I’d give Beware of Dog three stars, but during my viewing I decided that it should get another half star for the fact that it keeps the viewer guessing. Had the vorc not looked so silly, I probably would’ve gone up to four at that point. But the intriguing coda bumped it up to four for me anyway, so, there ya go.

Other Comments:
Aeryn’s getting genre-savvy: “If the parasites are that dangerous, we should jettison the food and solve the problem before it starts.” She must be watching the show.

Hey, where did the parasite get an extra set of Rygel-clothes? (Or does he have spares of the exact same type?) No one ever thinks about clothing in these sorts of episodes…