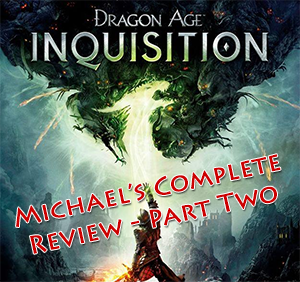 So now that I’ve sounded like a fountain of negativity to rival Yahtzee (but without the animation and deadpan hilarity) in part one of my full Dragon Age Inquisition review, it’s time for me to say what I actually liked about the game. There’s a lot to cover.

I know I made this something of a negative in part one, but that was only due to the sameness getting to me after a while. Too much of a good thing is far better than not enough, and DAI takes a good while before it feels like too much. For completionists, it may very well be regarded as a sort of heaven. The maps are gigantic. Each area feels like it’s own Skyrim, and there are so many nooks and crannies to poke into. Some areas even have additional areas that need to be unlocked via Inquisition operations (sending troops to rebuild a bridge, for example). 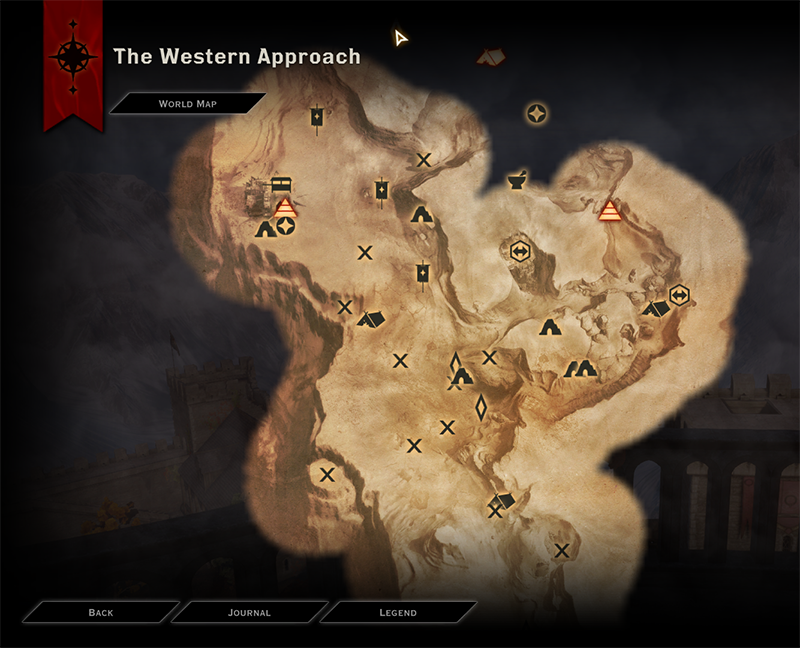 The Western Approach – one of ten big regions. I haven’t even uncovered the whole region and it won’t fit all on my screen zoomed out to maximum.

The continent of Thedas is gigantic. One might even say immenso-huge-gantuan. You really get the sense that you’re playing across an entire continent. There’s some suspension of disbelief required, of course. You can quite easily pop from one extreme of the continent to the other multiple times before dealing with an “urgent” mission – a certain empress was in danger of assassination for quite some time before I got around to dealing with that, for instance. But what game doesn’t require some suspension of disbelief?

The various regions of Thedas aren’t just big. Each has its own look and feel, from the rocky desert wastes of the Western Approach, to the swampy Fallow Mire festooned with undead, to the verdant forests of the Emerald Graves. And once you get to Skyhold, take some time to climb up to the balcony and just take in the view. It’s incredible.

Supply lines for Skyhold have got to be a logistical nightmare, but the view is worth it!

Dragon Age Inquisition has nine companion NPCs that can join you on quests, as well as various other non-companion NPCs that play pivotal roles. Almost all of them come with interesting quirks, backstories, and personal quests. (They all come with quirks, backstories, and quests – but one or two I found less interesting.) The party banter of DA:O is back, and there’s plenty of chances to talk to your companions between quests. 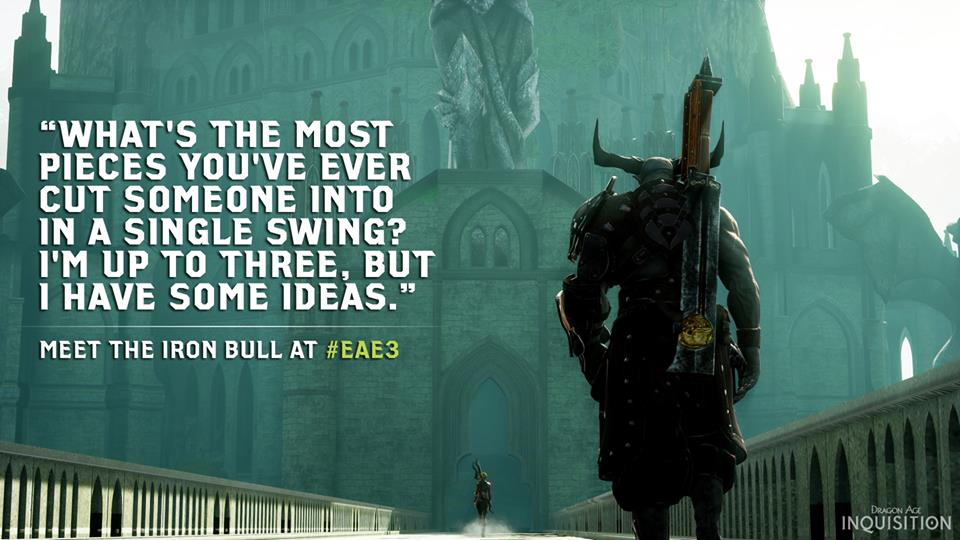 I haven’t even gotten to know all of them yet, really. As I usually do with the first play-through of any RPG, I roleplayed my character as much as I could, eschewing completionism in favor of responding how the character would respond. (This ensures plenty of unexplored quests and people for future play-throughs.) I found Dorian, a Tevinter mage exile, to be one of the most interesting, but I know little about the Orlesian court enchantress (whom Hobbes found too haughty) or the rogue who may very well be a spirit directly out of the Fade (whom just plain made Hobbes uneasy). I finished the game with Hobbes yesterday, and there’s one particular character that turned out to be FAR more than he or she appeared. Which leads me to…

The Story and Secrets

Mess with an Eluvian mirror! What could be the harm?

One of my favorite games is the original Deus Ex. The first time I played that, the story just kept going. I reached what I thought was going to be the endgame only to find out that it was just the mid- or three-quarter-point. DAI gave me that same feeling. I was approaching an event that I figured would have been the culmination of the entire plot only to find that was just the end of the first act, and the whole world opened up. I think I said it in my first look review: Don’t linger too much in the Hinterlands at the beginning. Move forward. You can always come back. The story becomes larger.

DAI also delves into some of the mysteries from the previous two games. The Black City. Lost gods. Maybe even an unholy god-baby that a certain apostate may or may not have created. There’s one character from the earlier games who caught me by surprise upon appearing for a couple of reasons, and… Well, I don’t want to spoil things for you. Now that I’ve finished my first play-through (and once I take a break to cleanse the palate), I’m eager to try a new one with an alternate Thedas history and different DAI choices just to see how things change.

Yeah, I know, I had a lot of complaints about the combat in part one. But it’s not without its good points. In my first look I mentioned not being sure what I thought of the healing system: Healing magic is (mostly) gone, healing is done with potions, etc. I decided I liked it. The injury system of the past is gone, and while I understood that was to balance instant post-combat auto-healing, it felt like more of a hurdle than anything. The instant auto-healing is gone (Yay! Consequences!), and the limited number of healing potions that you can carry keeps alive the challenge of getting through a fight unscathed. 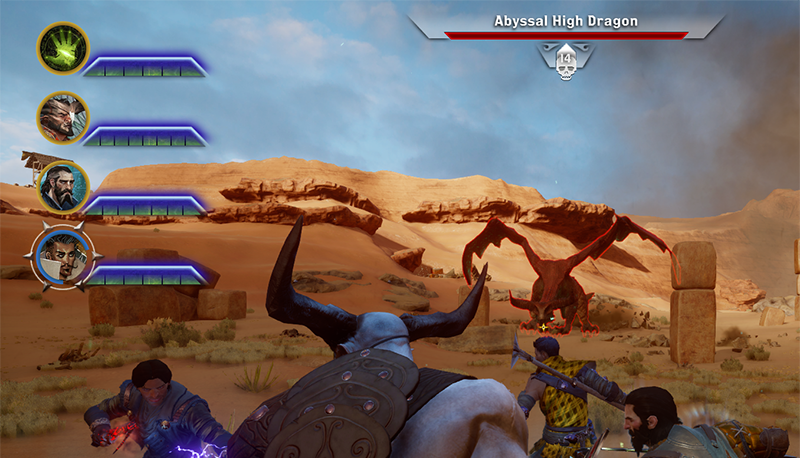 Rather than healing magic, there are damage-prevention barrier spells (that blue stuff) and “guard” for warriors.

Two more combat details I enjoyed: I read a lot of forum complaints about two-handed weapons being a lot slower now. Frankly, I like it. You shouldn’t be swinging around an immense double-bladed axe as fast as you can slash with a dagger. Big weapons should have weight. The other thing? Each character can achieve a unique spell/ability that can be used in rare instances. They’re powerful, but it takes time to build them back up again, so you have to judge when is best to use ’em, and that makes for a fun challenge. At least if you’re like me. (And Mythal help you if you are.)

DA: Origins – Slap the bejeezus out of the darkspawn with your GIANT HAND!

I had to list this one. Does anyone remember that everyone’s hands in Dragon Age: Origins seemed 50% larger than they ought to be? Even dwarves could easily palm a basketball. Of course this did not ruin the game by any means, but it was off-putting in an amusing sort of way. I think they’d gotten this under control in DA2, but I wanted to mention it here anyway because it’s my blog, so there.

The trouble with games that cast you as the leader of a grand organization (or, at least, one that you can build to grandness) is that you wonder why you’re the one who has to do all the heavy lifting. That’s one reason why I like DAI’s “War Table” concept. From here, you can direct your advisors to use Inquisition resources to accomplish various things across Thedas. Send spies to tip events in the Inquisition’s favor. Send soldiers to protect vital resources or establish a stronghold that increases the Inquisition’s power. Dispatch diplomatic emissaries to curry favor of kingdoms, merchants, and mercenaries. You start out gathering power, and as your power grows, you transition into choosing how to wield it. The War Table gives the feeling that you’re not the only one doing the heavy lifting.

The War Table. Can be used as the dinner table in a pinch.

Further, when you accomplish various quests directly while you’re out there in Thedas, you spread word of the Inquisition’s power and goals, gaining influence in the land. At certain points, you can spend influence on a myriad of upgrades that directly affect gameplay. It’s a great touch. Finally…

The Red Lyrium is Purdy!

What? It is! There’s a little bit of it in DA2, but that stuff is everywhere in DAI, the reason for which is inherent to the plot. It’s not just decorative. And perhaps most interesting, one of Varric’s side-quests leads to the idea that lyrium of both the red and blue variety may in fact be alive, and the red stuff is corrupted by the Blight! (Highlight that blank section to reveal a spoiler.)

So there you have it: My Dragon Age Inquisition review. (Click here if you missed part one.) It’s not the best RPG I’ve ever played, but even with its flaws, it’s a worthy effort. I’m looking forward to see how Dragon Age 4 builds on this continually evolving fantasy world.
I’m also hoping to see Sandal again. I want to know what’s up with that little dude. 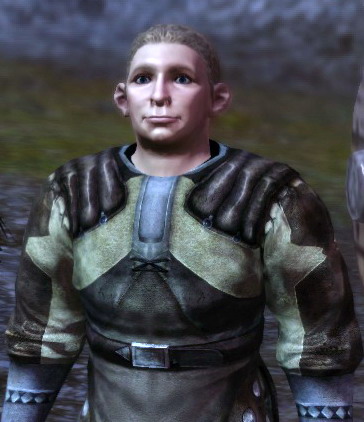