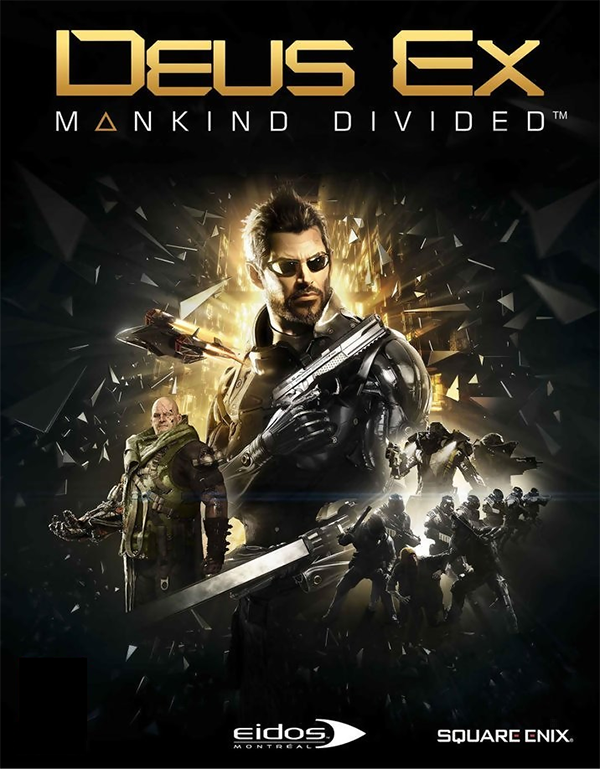 Deus Ex: Mankind Divided, has been out for PC for two weeks now, and it’s more than time for my review…

If you know anything about my gaming tastes, you probably know that Deus Ex, released in 2000 by developer Ion Storm, is one of my favorites. With expensive environments, multiple gameplay styles, and character customization on top of a lengthy sci-fi plot that’s a conspiracy theorist’s dream, it won over 30 “best of” awards in 2001. Though the sequel was disappointing to say the least, 2011’s Deus Ex: Human Revolution–while not without flaws of its own–brought the series back to being worthy of players’ time. And now we’ve got Mankind Divided, taking place two years after the events of Human Revolution (which itself takes place 25 years before the original).

Steam tells me that I’ve logged over 25 hours in Mankind Divided so far, and my sense of the story is that I haven’t moved beyond the first quarter of the game. (Maybe the first third? I’m guessing here.) Note that I’m the sneaky, careful sort, and MD gives maps with plenty to explore, so I’m probably not burning through it as fast as some people might. If you’ve played the game, save for the game-opening tutorial mission in Dubai, I’ve only barely gotten out of the Czech Republic, with my last save at a point where I’ve just left a certain facility in Switzerland.

But enough of that. What do I think about the game?! Short answer: Loving it! Long answer: Let me break it down for you…

It’s two years after the events at Panchea, and from what I can tell, the “blow everything up and let mankind sort it out,” 4th ending option appears to have been canon. Adam Jensen is now part of a pre-UNATCO anti-terrorist arm of Interpol. Sarif Industries has collapsed, its remnants having been bought by Tai Yong Medical. Cybernetically augmented people (“augs”) are feared, segregated, second-class citizens thanks to the events of Human Revolution where they all went bonkers for a time. But if you’ve seen the game trailers, you knew all that.

So first of all, I’m most assuredly having fun! (With 25 hours logged, I’d better be, huh?) The maps in the game hubs (though admittedly I’ve only seen Prague and one other) are bigger than Human Revolution. The Detroit map from HR is about 1/3rd the size of the Prague hub, and filled with various places to explore. I’m sure there are details I haven’t yet explored after getting caught up in the plot. The fact that you’re walking through a segregated society is very apparent. Subway stations have “natural” and “aug” sections, the latter of which is covered in guards and barbed wire. I rode the “natural” subway car once and got uncomfortable looks from the passengers and a scolding from the police. Since then, I’ve fallen in line, but in another playthrough I’ll push the envelope and see what the consequences are.

If you’ve played Human Revolution, the gameplay is very similar, but with a few tweaks. The sneaking system has changed just a little, allowing you to dash to other hiding spots quickly. So far the different control scheme there has taken some getting used to, but the change does make things easier in an “if it hadn’t changed I’d be okay too” sort of way. Making a return from the original is the multitool, which is now an automatic success for hacking things, regardless of your skill level. They’re hard to find, and expensive to buy or build.

Weapons have seen more changes. The game now employs iron sights (hold down the right mouse to aim more precisely–no more target crosshair without it), making a laser sight additionally useful, and adding a bit of nuance. Each weapon now has different types of ammo (I’ve seen regular, armor-piercing, and EMP rounds), a change I welcome. (More nuance! More combination!) Furthermore, in addition to adding scopes, silencers, laser sights, etc. with weapon mods, you can also find generic parts. With enough parts you can make changes to a weapon, upping its accuracy, damage, reload speed, etc. You can modify a pistol to fire a three round burst–and be able to switch back and forth between settings on the fly. Take a silencer on, take it off. (Having it on reduces damage.) 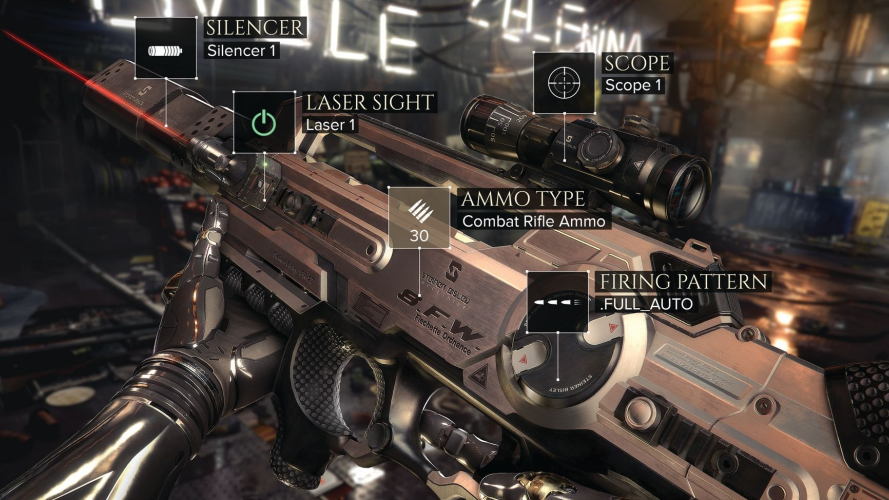 And of course there are new augmentations available. Why they’re available at all is a plot point (and I’m still learning that myself), so I won’t go into that, nor the details of the new ones. I will say that I love the hack-from-a-distance one. It doesn’t let you hack computers or door locks, but need to disable a camera, bot, or turret? No problem! Need to trip a switch that will close some window shades so you can sneak through? Done! Need to lower a retracted ladder 3 stories up? Do it. 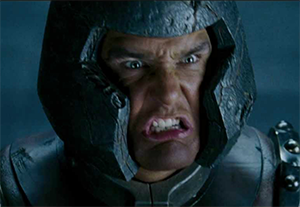 No, not THAT Juggernaut.

The story so far is holding my interest. Unlike previous games, you start the game with a dual allegiance, which feels a more empowering and intriguing. In addition to being a part of Interpol, you’re secretly with a group called the “Juggernaut Collective” that tries to expose the secrets of groups like the Illuminati. I did have to pay a little more attention at the beginning just to make sure I was right about that–I wasn’t expecting it, but it was welcome.

Characters run the gamut. Some I like, some are bland. Favorites at this point include a woman named Vega, my contact with the Collective. She reminds me a bit of the pilot from the last game whose name I forget. Her voice actress may even be the same, though I’m not sure. I’m curious to know more about the new pilot. There’s also a host of people at Interpol: a paranoid IT security man, a psychologist who I’m starting to suspect has a dual allegiance of her own (because reasons), and a friendly weapons officer, among others. There’s also a few comparatively drab authority figures, but perhaps they’ll be more interesting soon.

Oh, and Joseph Manderly and Bob Page have already shown up in more than simple cameos. No sign yet of Pritchard from HR, nor Megan Reed.

As for how the game actually runs, I did have a couple of crashes early on before I updated my video drivers. Load times take a while, at least when loading a new area such as when you start the game or take the subway to a different section of Prague. The game also takes a little bit to completely catch up once it does load (very low frame rates for the first 5-10 seconds just as I got off the subway, for example). Reloading in the same area (i.e. from a quicksave after I’ve just accidentally been spotted by 15 security guards that I was trying to slip past) is pretty quick however. Note that I’m playing with only 8GB of system RAM, which is the minimum required. 16GB is recommended.

In any case, given how much I’ve played and enjoyed it so far, I already feel I’ve gotten my money’s worth. Hopefully I’ll continue to do so as the plot unfolds, but I suppose time will tell. I’m already curious to see how certain situations will play out when I switch to a more, shall we say, forceful play style. 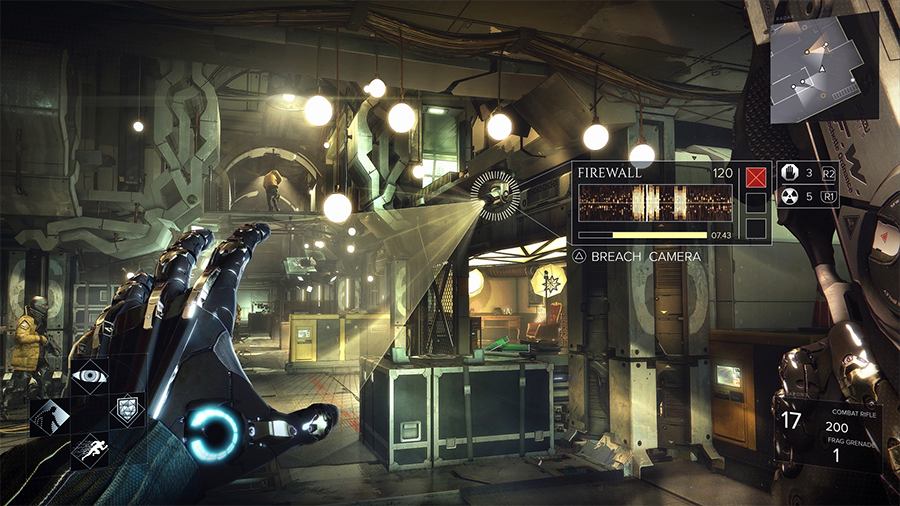 Just hacking stuff from across the room…

I could say a whole lot more about the game, but in the interest of keeping this post at a reasonable length (and of getting back to playing), I’ll leave it at that. Bottom line, if you enjoyed Human Revolution, you’ll enjoy this one. And if you haven’t, but you like games in a futuristic setting where you can sneak around, blast your way through, or talk your way out while working your way up to having some pretty awesome cybernetic abilities, give this one a shot.

Update: Except, no so fast! Have a look at my post-completion review update…