It’s Wednesday (or at least it is somewhere), and so it’s time for another Guest Geek post! Today fellow geek, Laura VanArendonk Baugh takes us into the world of cosplay. It’s something I’ve always admired but never quite managed the energy for myself, unless you count my Tony Stark outfit that I wore for Halloween last year. Laura, on the other hand, definitely knows what she’s doing, and it’s pretty darned impressive! (And suddenly I’m thinking about cosplay possibilities for Zeus Is Dead…)

Laura VanArendonk Baugh and the Temple of Cosplay

My name is Laura, and I’m a cosplayer.

To be specific, I’m a masters-level competitive cosplayer, a cosplay judge, a cosplay instructor, and a total nerd-geek. 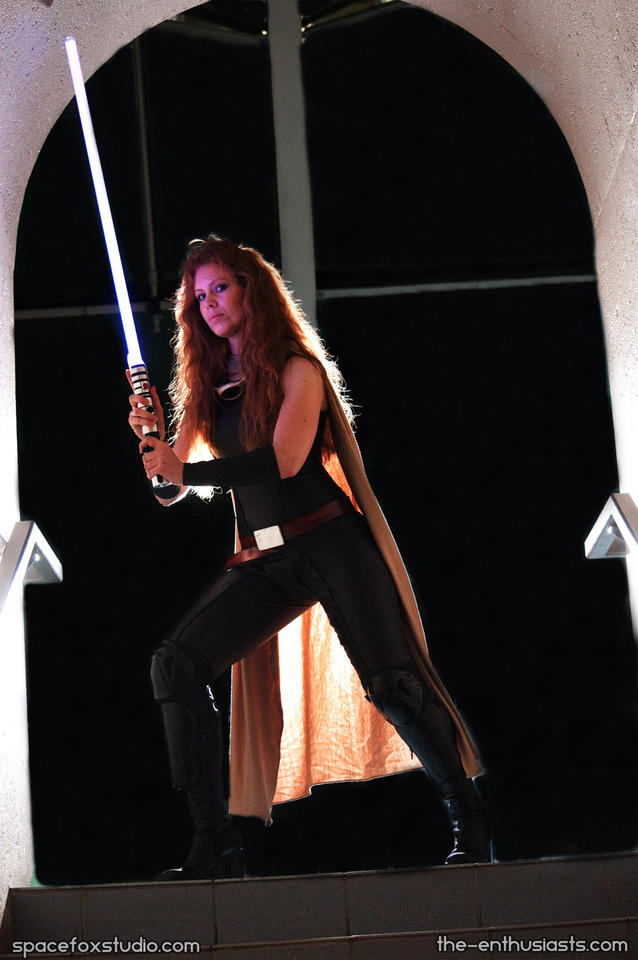 Me as Mara Jade from the Star Wars expanded universe.

Cosplay is a contraction of “costumed playacting” and can include fan costuming (recreating characters from favorite movies, comics, games, anime, etc., such as Batman), original costuming (creating your own character, common in steampunk and other communities), or a mashup (steampunk version of Vash the Stampede or Disney Princess Thor). It’s not a new thing; cosplay can trace its modern roots to the 1930s and every kid who donned a coonskin cap in the 1950s.

Historical costuming (creating an authentic look from another time or place, such as wearing a juuni-hitoe from Heian-era Japan or a Victorian-era gown) is more often called “costuming” than cosplay, and some people are very particular about that, but personally I’ll never be offended if you interchange the terms while speaking with me.

In short, cosplay showcases creativity and craftsmanship. It can involve quite a variety of media and materials, from ordinary fabric to resin to thermoplastics to silicone, as well as styling wigs, doing makeup or special effects, and learning to walk in a wholly new way for crossplay (see below) or characterization.

Cosplay is often considered a performance art, in the creation of a complete costume and then interaction in character with the public. Charity work is very common, with well-known examples including the 501st and Rebel Legion, Causeplayers and Cosplay for a Cause, and Captain Cosplay (Michael Mulligan as Captain America and others) appearing for the USO.

Cosplay is not just about boobs. Yes, the media tends to select a lot of sexy girls in skimpy costumes for news coverage, but that’s for the same reason as the media slaps sexy pictures on anything else: to make you stop switching or scrolling and pay attention to their story before someone else’s. In reality, the community values craft above sex appeal, and while if a costume happens to be sexy, great! But we care more about a great costume. 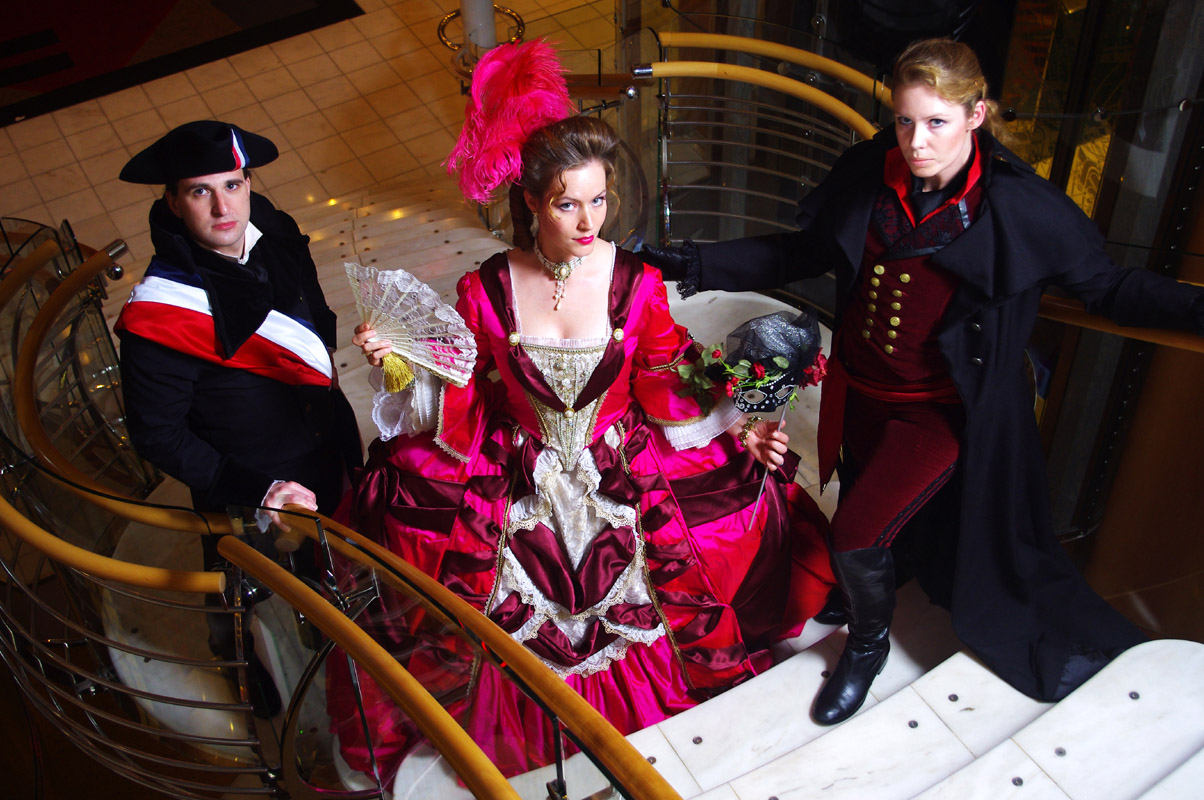 My cosplay group “…And Sewing Is Half the Battle!”: Mark, Alena, and myself, as Citizen Chauvelin, Marguerite, and Sir Percy from The Scarlet Pimpernel, Takarazuka production.

Crossplay, or playing a character of the opposite sex, is common in cosplay and generally has nothing to do with the cosplayer’s own sexual identity. My sister and I play just as many male characters as female – mostly because more good male characters are written than female, which is sad – and we’ve each been mistaken for guys on multiple occasions! 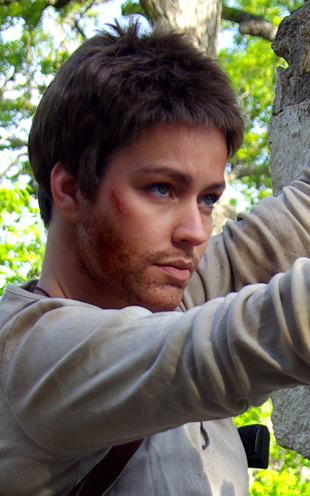 My sister Alena crossplaying as Nathan Drake from the video game series Uncharted.

Cosplay, and especially crossplay, can require new skills in makeup design and application, in standing and walking, in handling props and posing. This is great side work for an author, of course – it’s all about building a character!

A lot of research goes into my own cosplay, because I tend toward costumes based on or inspired by historical clothing, and while accuracy to the character and source may ultimately mean historical inaccuracy, a working knowledge of what it came from can often really help. For example, for a Meiji-era costume, I made my own hakama (pleated trousers) of linen, after learning they would traditionally have been made of hemp, as the two fibers are so similar that they actually share a word in Japanese. I wove my own zouri (sandals) from natural twine, because I wanted more durability than the traditional dried grass they would have been but a similar look. I learned to tie period knots. And now I’m that annoying friend you can’t watch low-budget historical movies with…. 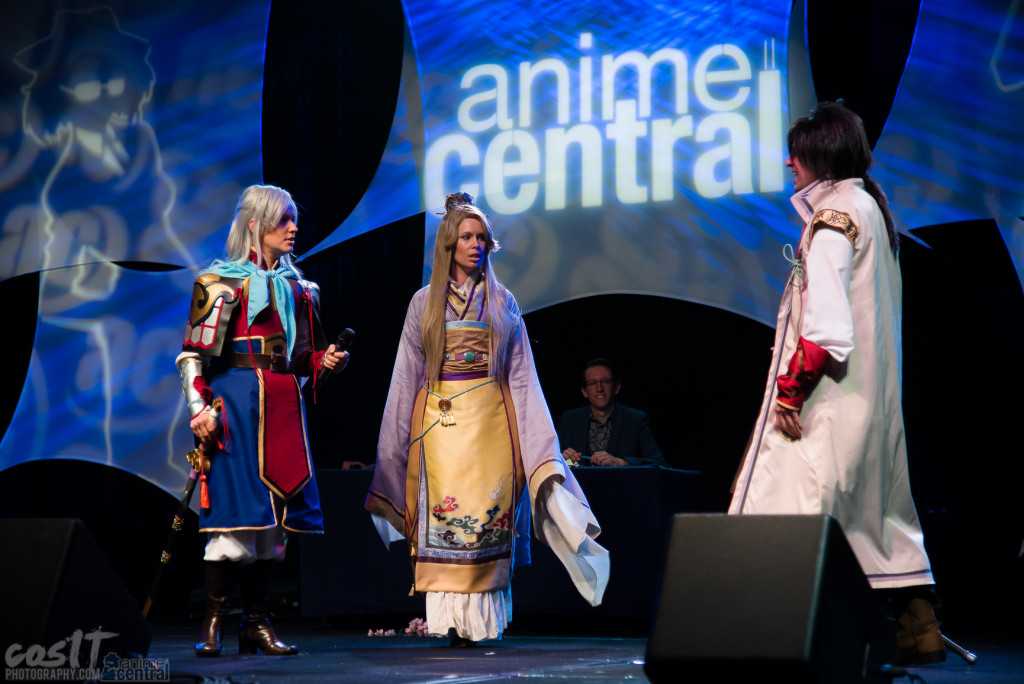 “…And Sewing Is Half the Battle!” performing as Shi Seiran, Emperor Ryuuki, and Ro Ensei from Saiunkoku Monogatari

Cosplay can have enormous social benefits. Not only is it a very collaborative hobby, with lots of sharing of techniques and ideas, but the nature of cosplay is interaction with others: wearing the costume, posing for photos, explaining its construction, complimenting another’s work, perhaps even presenting to judges and performing onstage in a contest. A cosplay colleague told me that when she was asked to do a major presentation at work, something she had no experience in and was nervous to contemplate, she thought back to her cosplay experience and imagined herself onstage. And she nailed the presentation with lots of credit from her boss. 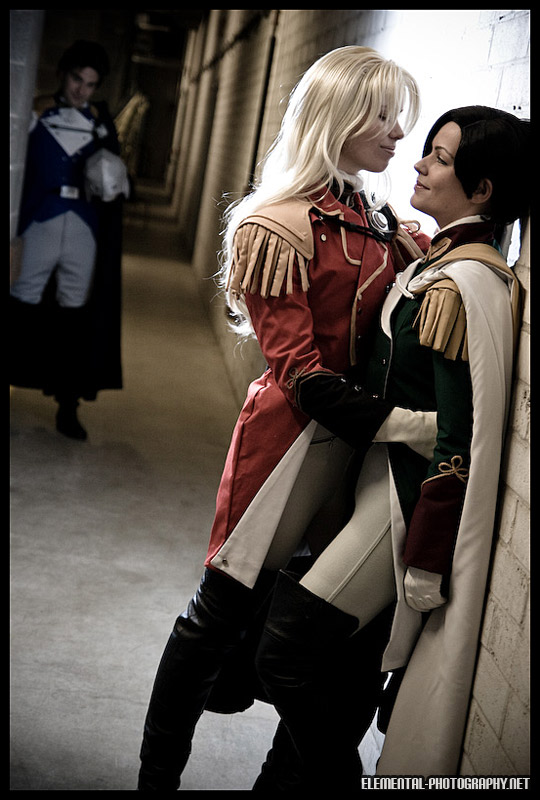 “…And Sewing Is Half the Battle!” again as Treize Kushrenada, Zechs Merquise, and Lucrezia Noin from the series Gundam Wing.

Cosplay is a major enterprise. Okay, it doesn’t have to be; you can put as much time into it as you want. I’ve spent anywhere from a couple of hours to hundreds of hours on a single costume. I’m working right now on a costume which has been technically in progress for a couple of years, but that’s because it’s a very daunting project which terrifies me, and sometimes I have to put it aside until I get the nerve to tackle it again. At the same time I’m doing a costume which will be only a few hours’ work.

Sometimes it takes money, if you’re working with difficult or expensive materials, but it certainly doesn’t have to. It’s a hobby like any other, and you can commit as much as you want and get out what you put in.

And speaking as a creator, cosplay is flattery. I was wildly excited when I discovered fan art on Facebook from Con Job, my geeky murder mystery, and then a few weeks ago someone asked me for suggestions in creating cosplay for the same book. There’s no greater compliment to an author than that a reader wants to spend more time with the characters – and not just passive reading time, but active creative time of their own. Seriously, guys, if you do fan art or cosplay or anything else similar from your favorite books, please tell the authors. You’ll make their day. 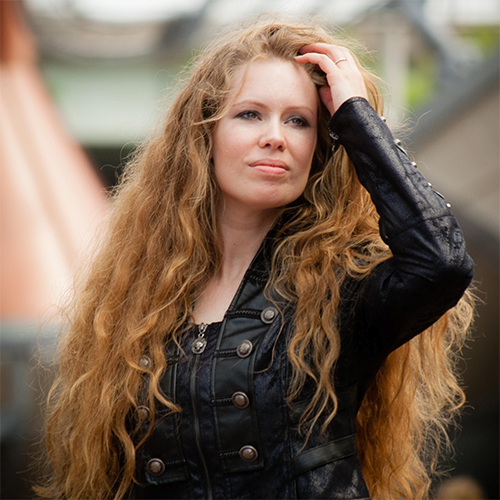 Laura VanArendonk Baugh was born at a very early age and never looked back. She overcame childhood deficiencies of having been born without teeth or developed motor skills, and by the time she matured into a recognizable adult she had become a behavior scientist, an internationally-recognized and award-winning animal trainer, a popular costumer/cosplayer, a chocolate addict, and of course a writer.

Find her at www.LauraVanArendonkBaugh.com or tweeting at @Laura_VAB. Laura is one-third of the cosplay group “…And Sewing Is Half the Battle!” and they’d love to talk with you about geekery.