Look! There’s someone else besides me writing on Geek Notes! That must mean it’s time again for a Guest Geeks post! (That, or the blog has been usurped by North Korean hackers, I suppose.) This week my guest geek is Sheri Williams, who comes to share with us a little about her obsession with Doctor Who. I was a bit of a latecomer to the show myself, and–

Well, maybe I’ll save that for my own post sometime. I’ll simply say that Tennant’s Doctor is my favorite (I also think he’d make a great Hermes if Zeus Is Dead ever becomes a movie), and yield the floor to Sheri…

Being a Whovian isn’t a super power, I kid a bit with that. It is however an all encompassing obsession. I’d never quite experienced anything like it. Even know, a full year plus into it, the strength of it surprises me sometimes. I guess I should back up and explain my descent into madness. (really and truly that’s what it was) It’s started something like this:

Then I found BBC America. I saw Doctor Who on the guide. I clicked on it. I saw this show about a red headed girl, her boyfriend and this crazy alien that didn’t look like an alien. There was a clone of the girl. There was robots and swords and I was like, “This is ridiculous. No way I am getting into this.”

I changed the channel and didn’t think about it again. Then a few weeks later, the friend was back at school pick up wearing that shirt again.

M: “Hey I tried that show but it was confusing. Seemed too silly.”
F: “What? No. What episode did you watch?”

I explained about the robots, and the clone and the red headed girl. The alien that didn’t look like an alien, he with the funny looking face. She looks horrified.

I was all like meh, but I was intrigued by her passion. So I did. I found the 9th Doctor. And I fell in love. Like, I can’t even describe the love I have for this show. The 9th Doctor is amazing. He’s sarcastic. He’s snarky. And he was heartbroken. The amount of empathy I could feel for a character on a TV show astounded me. But I did, I felt for him, from the get go. I cried like a baby when he regenerated (spoilers for those who don’t watch). I sputtered, and fussed. “I’m not going to like this new 10th Doctor near as much.” Holy shit I had never been more wrong in my life. 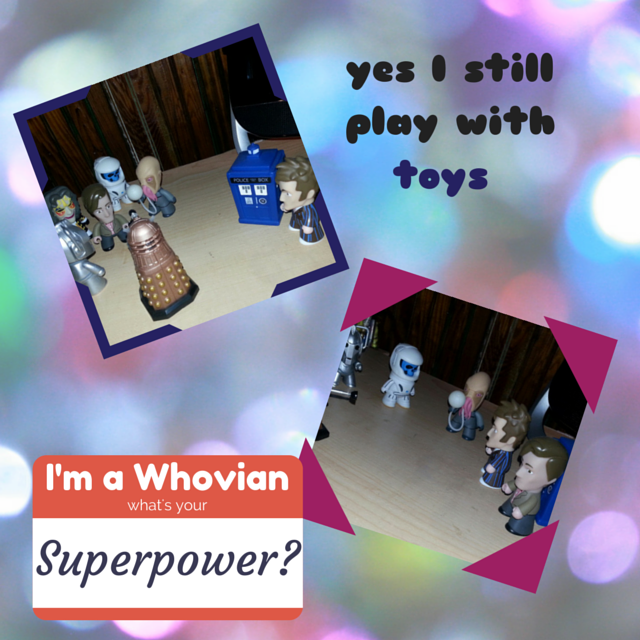 The 10th Doctor is even more amazing, no that’s wrong, is amazing in a whole new way. I fall in love again. Maybe just a bit harder. I binge watch whole seasons. I cry more and more. I pick my favorite companion (Donna, for the win) I come to the end of Ten’s reign and I swear that the next Doctor will never be as good. I’m right. I never did love Eleven as much as Nine or Ten. But that’s me. I watched nine years of TV in three months. Let that settle in. Nine years of TV in three months.

I watched while I cooked on my phone. I found a streaming site to find the episodes I couldn’t find on Netflix. I stayed up late and watched episodes while my husband slept. It was slightly insane. I recognize that now. But when you are in that fever, that I-Must-Have-All-The-Doctor-Who you don’t realize how absurd you are being. When I got done with all that I could find, I had to wait, oh the horror, for a new season. This would not do. I rewatched my favorite episodes. I went back and started the classic episodes. And holy treasure trove. I stalked David Tennant’s backlog and found a bunch of his other work. I fell in love with him as an actor.

That’s the thing about being a Whovian, it doesn’t just lead to money being spent on merchandise (don’t get me started) it is a rabbit hole full of twists and turns. I had discovered not only Doctor Who, but the BBC. Which lead me to Broadchurch (David T. again) to Sherlock (oh holy hell). With the most recent season over, the introduction of the 12th Doctor, I am again waiting. Planning on a re-watching binge. I loved the new Doctor. I loved how cranky he was, how he reminded me of some of the older Doctors. 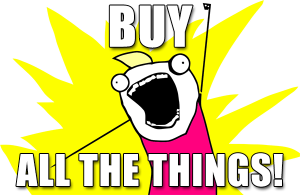 While I wait for the next season I get my Doctor fix in other ways. Graphic novels. The new Funko Pop line that is finally coming out this year. Novelizations. More T-shirts. Have you seen that Buy All The Things meme? Yeah that is me. So, this was my descent in Whovian-ness. If you are a nerd like me, then I’m sure you have a similar story. Might not be Doctor Who (but it should be, awesome I promise), did you go to the lengths I did? Farther? I have a plan to get a Who tattoo, that’s not too far, is it?

Anyway, thanks for listening to me ramble about my love for all things Doctor Who.

Sheri Williams is a woman of contradictions. A Yankee living in the deep south, a wanderer who has to sit still, a geek who used to be a jock. She lives to write and read, but not as much as she lives for her family. A mother and a wife to amazing humans, as well as parent to multiple fur babies, she lives in a tiny house overpopulated. Sheri has multiple things in the works and her first full length novel will was out at the end of November. She has always been a hopeless romantic and finds writing romance help keeps it alive.