I’ve decided to break these re-watches down into a few sections. I’ll start with my specific memories of my first experience with each of these episodes from way back when I first caught the show in college. Then I’ll slip into my thoughts and observations while I view it anew, and then follow that up with my picks for favorite lines, moments, etc…

Autumn 1992: The University of Washington Haggett Hall lounge. I think we started the episode with just me, Nick, and Ted the R.A., but as the pilot went on, more and more people joined us as they came in and saw what we were watching. I was amazed at how many people recognized it and wanted to see it again.

With Nick having told me that the killer was a guy named Bob, I kept getting confused when I pointed at Bobby and he told me “No, different BOB. You haven’t seen him yet.” I was also surprised by how many people in this show were involved in affairs (I was so naive about TV drama), which is doubly amusing to me now because the pilot only features Shelly/Bobby and Norma/Big Ed’s affairs.

All in all, though, Nick was right: after just the pilot episode, I was hooked.

So I just hit play, and as the somber, peaceful soundtrack of Angelo Badalamenti plays over saw blades and waterfalls, I come to the horrible realization that I’m starting this re-watch with neither cherry pie, nor donuts, nor coffee. I don’t even have a green-butt skunk. I’m already very disappointed in myself.

But the show must go on!

The opening to Twin Peaks is so very long in comparison to most modern shows. This lets you settle into the experience, find your Twin Peaksing mood… I like it. I’m suddenly wondering if the revival will keep the same opening entirely, or change it up a bit. Can’t wait to find out! But I’m getting ahead of myself. I now begin to watch the first ever episode of Twin Peaks, written by Mark Frost & David Lynch, directed by David Lynch.

Laura’s dead. Wrapped in plastic. The one thing they never looked into: Did anyone buy a lot of plastic recently? I’m sure viewers speculated about Leo’s guilt in relation to that, given the plastic in the Johnson home renovations.

Lucy’s introduction is pretty much spot on for her character: 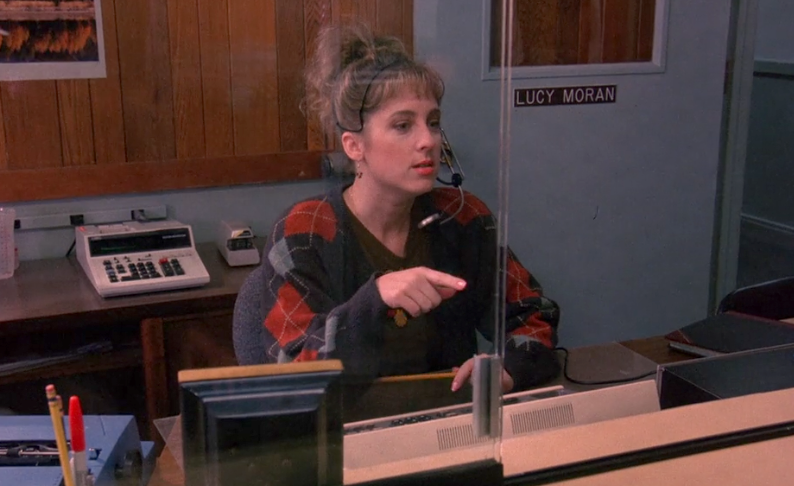 “Sheriff, it’s Pete Martell up at the mill. I’m going to transfer it to the phone on the table by the red chair. The red chair against the wall? The little table, with the lamp on it? The lamp we moved from the corner? The black phone, not the brown phone.”

This episode has so many long, static shots. The moments with Sarah Palmer searching the upstairs, viewed entirely from the bottom of the stairs, bring such a feeling of foreboding as a parent’s worst nightmare unfolds despite the sunlight streaming through from outside. And then of course there’s that long, ominous shot of the stairway ceiling fan that’s now a little iconic.

Of course, this being the pilot episode, there are so many first shots. The waterfall. The Great Northern Hotel. The light at Sparkwood & 21. And of course, the donut spread. There are also a few places we never see again in their pilot form, places filmed on location in North Bend/Snoqualmie, Washington but later done with sets for the rest of the series: The RR Diner interior (actually the interior of the Mar-T Cafe, which was always used for the exterior shots); The Twin Peaks sheriff’s station (aka the Weyerhaeuser sawmill offices, right up the hill from the sawmill, which itself was the mill in Twin Peaks). The interior of Twin Peaks High School (actually Mt. Si High School, in the series).

Along with places we never see again, there are pilot characters we never see again: The high school football coach. Heidi, the giggling German RR waitress. (Well, okay, so she does show up in the season 2 finale.) Principal Wolchezk. Audrey’s perm. And, of course, Julie, the put-upon Great Northern concierge. Did Ben fire her after the Norwegians left, or did she decide she had enough of dealing with Audrey and left of her own accord?

Oh, and while this doesn’t quite count, the first part of the episode features Leland Palmer, perhaps looking and acting “normal” for one of the only times we’ll ever see. 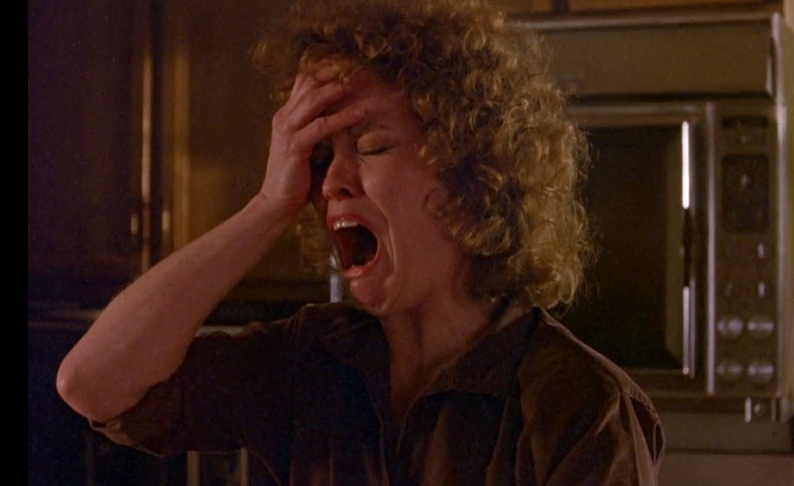 Sarah Palmer, shrieking in that practiced way we all know and love/hate.

“He called me last night from Butte. That’s a long ways away, and he ain’t got a phone in his truck.” Simpler times.

Donna Hayward, Audrey Horne, James Hurley. Were they purposely named with Hs so they could all be introduced quickly during the role call, or was that just a happy coincidence?

There’s a whale fluke poster in the library – we had one of those in one of my junior high science classrooms, too. 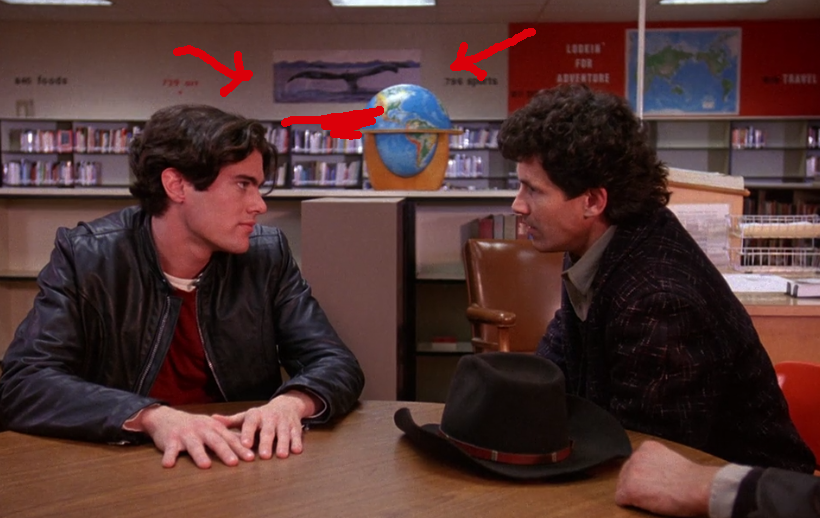 And then, finally, after what seems such a long time for all the places, characters, and things to which we’ve been introduced, at exactly thirty-six minutes in, we have the introduction of Special Agent Dale Cooper. The entire monologue as he’s talking to Diane is a fantastic introduction to this character: Detailed, methodical, and able to marvel at things as simple as a cherry pie. I’m just going to put the whole damn thing here:

“Diane, 11:30 a.m., February Twenty-fourth. Entering the town of Twin Peaks, five miles south of the Canadian border, twelve miles west of the state line. I’ve never seen so many trees in my life. As W. C. Fields would say, I’d rather be here than Philadelphia. Fifty-four degrees on a slightly overcast day. Weatherman said rain. If you could get paid that kind of money for being wrong sixty percent of the time, it’d beat working. Mileage is seventy-nine thousand three hundred forty-five, gauge is on reserve, riding on fumes here, I’ve got to tank up when I get into town. Remind me to tell you how much that is. Lunch was, uh, six dollars and thirty-one cents at the Lamplighter Inn, that’s on Highway Two near Lewis Fork. That was a tuna fish sandwich on whole wheat, slice of cherry pie, and a cup of coffee. Damn good food. Diane, if you ever get up this way that cherry pie is worth a stop. Okay. Looks like I’ll be meeting up with the, ah, Sheriff Harry S. Truman. Shouldn’t be too hard to remember that. He’ll be at the Calhoun Memorial Hospital. I guess we’re going to go up to intensive care and take a look at that girl that crawled down the railroad tracks off the mountain. When I finish there I’ll be checking into a motel. I’m sure the sheriff will be able to recommend a clean place, reasonably priced. That’s what I need, a clean place, reasonably priced.” 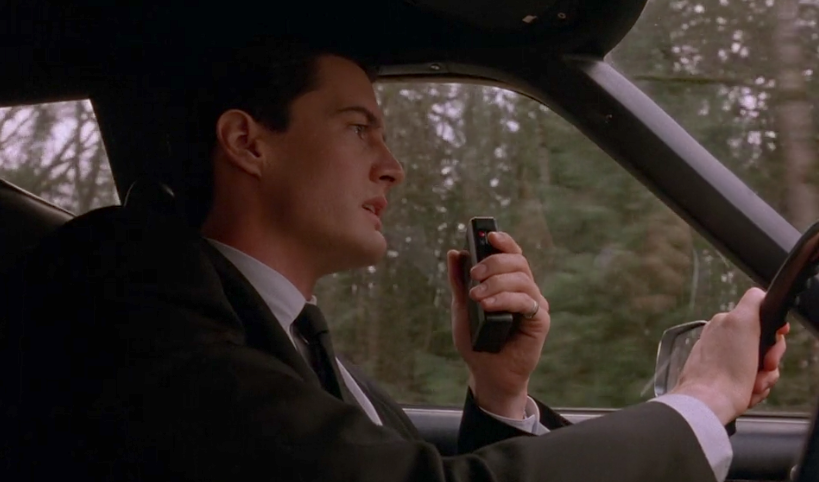 For me, it’s not *really* Twin Peaks until this moment.

Cooper’s mention of the location of the town, pretty much in the extreme northeast part of Washington State, doesn’t quite seem to fit later on, as it really feels more like it’s on the other side of the Cascade Mountains for those of us who live here in Washington. Still, close enough.

We’re further introduced one of my favorite of Agent Cooper’s qualities: He has an almost childlike wonder at some things, yet he’s still able to turn on a dime from appreciating things like the beauty of a Douglas fir tree into the something more serious. 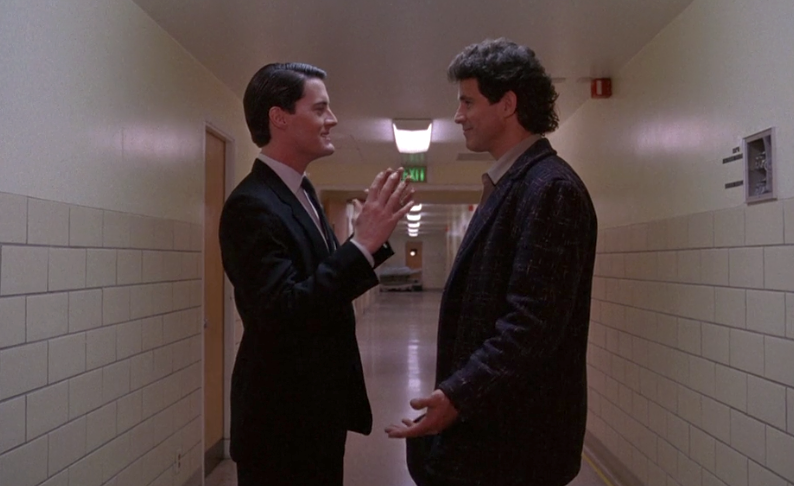 “Sheriff, what kind of fantastic trees have you got growing around here? Big, majestic…” “Douglas firs.” “Douglas firs! …Can someone get me a copy of the coroner’s report on the dead girl?”

I’m not the biggest David Lynch expert in the world, but Cooper’s examination of Laura’s body in the morgue strikes me as one of the more Lynchian moments in the pilot. Lynch likes to incorporate into his works certain accidents or unintended details that other directors might call cut on or edit out, and sometimes those things can take on a life of their own. We get two things in the examination scene. The flickering florescent lights were apparently a malfunction that Lynch left in rather than getting a replacement bulb. Not only does this create atmosphere, but for weirdos like me who look for meaning in everything, it connects with something else. In Fire Walk With Me (and, arguably, later in the series) it’s heavily implied that BOB can move through electricity. In my personal head-canon, the light here means BOB (or another denizen of the Black Lodge) was watching. The second instance just provides a little extra quirk, when the guy playing the morgue attendant misheard Kyle McLachlan’s line. McLachlan stayed in the moment. 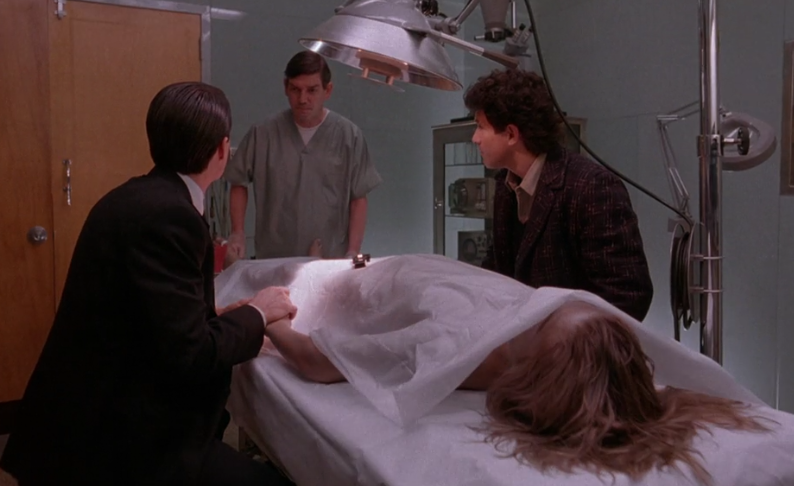 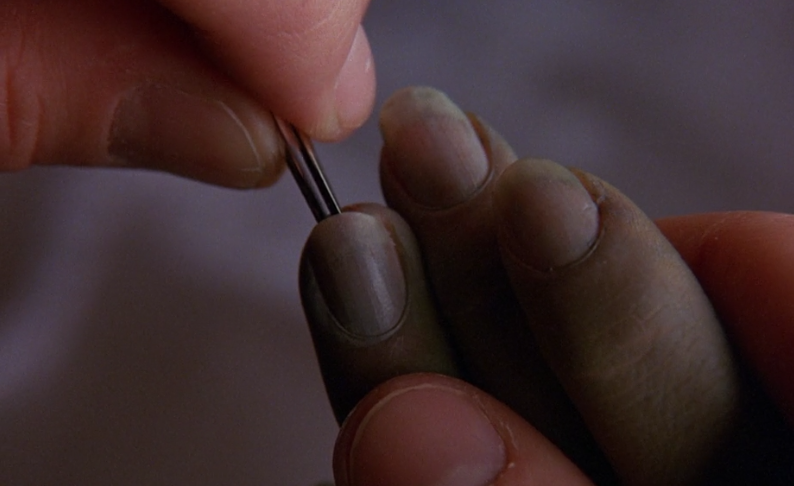 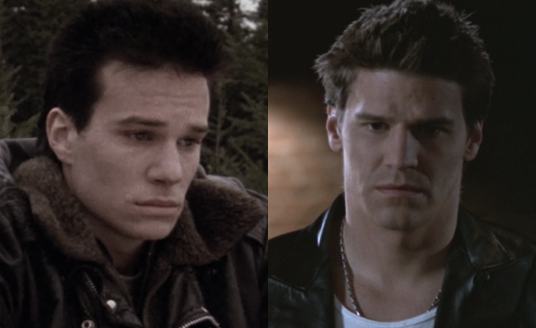 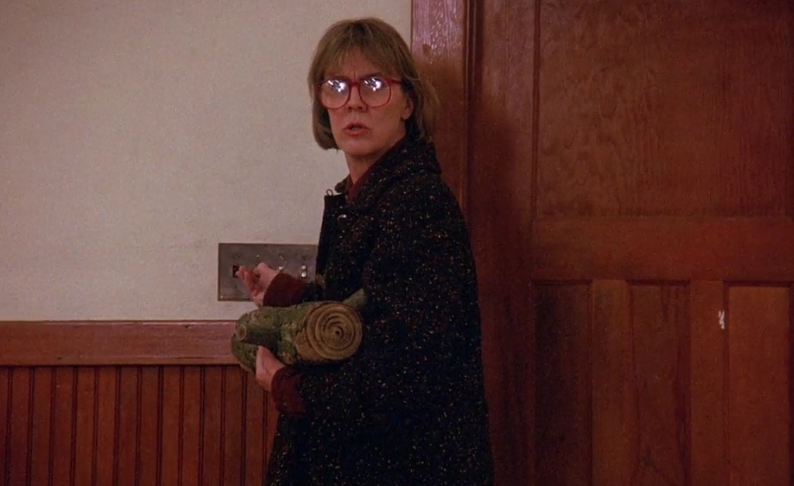 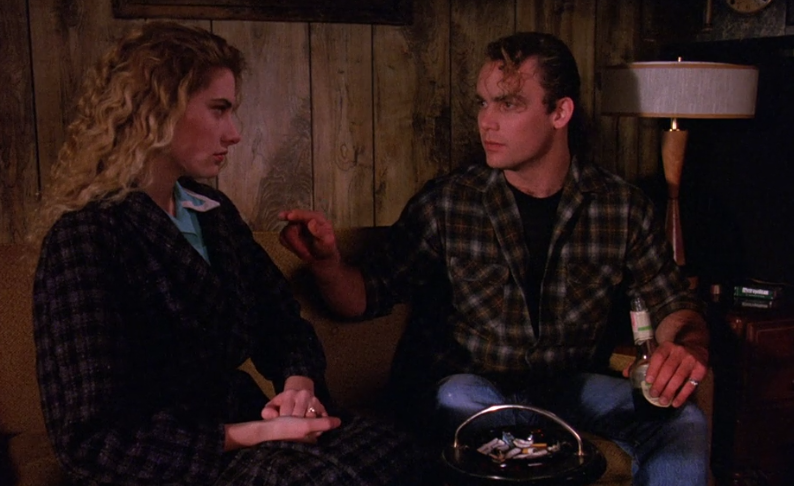 Leo Johnson: An abusive asshole from the moment we meet him. 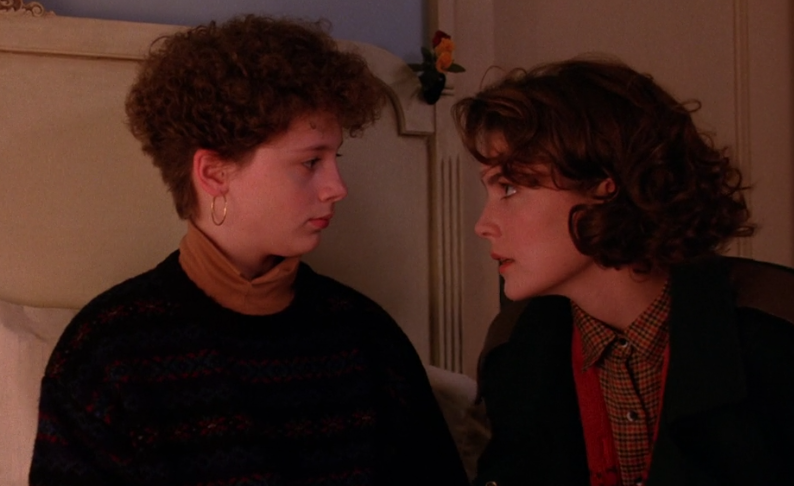 Harriet Hayward, who sells out her sister in approximately 7.5 seconds after promising to cover for her. She doesn’t even try to spin a story.

Favorite moment:
1) Cooper interviewing Bobby. I love Cooper’s cheerful unwillingness to take any of Bobby’s crap.
OR
2) The Norwegians are leaving!

Least favorite moment:
It’s minor, but when Bobby’s football coach delivers his lines over the phone to Mrs. Palmer, he really does sound like he’s phoning it in.

Weirdest moment:
It’s a tie between Mike and Bobby barking at James in jail to screw with him, or Sarah Palmer’s episode ending freakout with accidental BOB. 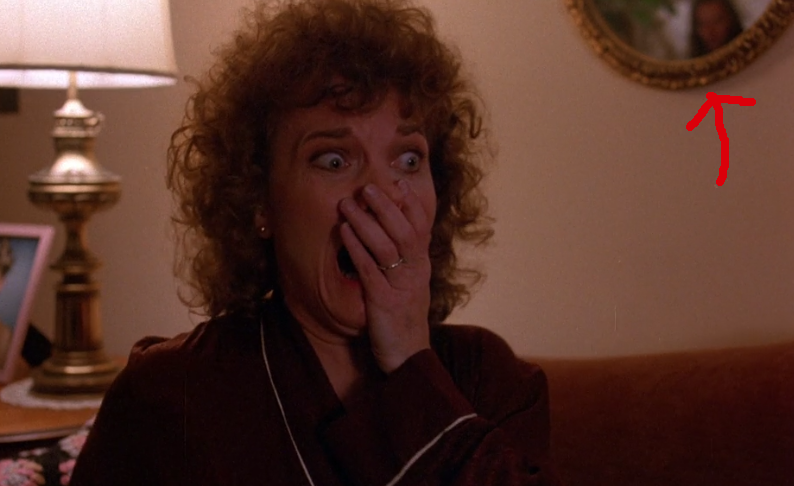 Another example of Lynch just seeing where a mistake leads him. Frank Silva, part of the crew, wasn’t supposed to be caught in the mirror, but damn, that was a happy, creepy accident, wasn’t it?

“ED! Are you waiting for those drapes to hang themselves?!”
“YAOKAY!”

Things I noticed for the first time:
Leland’s “Do you have to take that?” when Hawk found Laura’s (non-secret) diary in her room. Was that a grieving father not wanting to let pieces of his daughter go more than he has to, or was BOB in there, trying to cover? 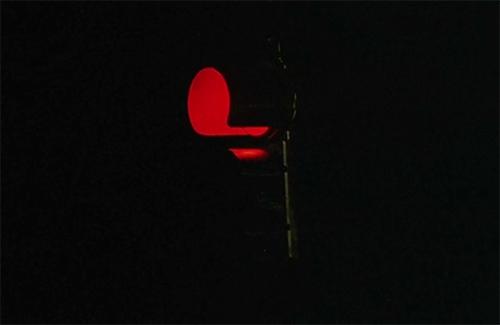 See you soon for episode 2…

On to episode 2…
View all of my Twin Peaks re-watch blogs here!