Ah, the first non-pilot episode! Things look a little more polished. The sets are built, and this episode has more vibrant color than the pilot, which is mostly a characteristic that carries on through the rest of the series. I’ve always assumed that’s chest one of those changes that happens between the production of any pilot episode and when the show is picked up. More than the pilot, this episode really feels more like Twin Peaks. Maybe it’s that visual difference. Maybe it’s the additional quirkiness (not that the pilot wasn’t quirky), like Sheriff Truman shoving an entire donut into his mouth, Cooper ending a long list of directives with “Harry, I really have to urinate,” or a fish in the percolator.

I don’t have many specific memories of my initial viewing, but I do recall getting startled by the first real shot of BOB, and asking Nick who that was. Nick: “That’s BOB.” Me: “Yeah, he’s definitely not Bobby.”

I’ve decided that I’m going to watch the entire credits sequence each episode to better set the mood. Whenever I showed it to others, often we wound up fast-forwarding, but I always felt just a little guilty about it. For me, the credits are part of the Twin Peaks experience, and it feels wrong to avoid them. Also, I’m now two episodes in, and I still haven’t had the foresight to have any pie with me.

Immediately after the standard opening credits, it switches to the classic Twin Peaks low-key jazzy, finger-snapping tune. I defy anyone to watch this opening, and hear that music, and not snap their fingers along with it. I DEFY YOU! 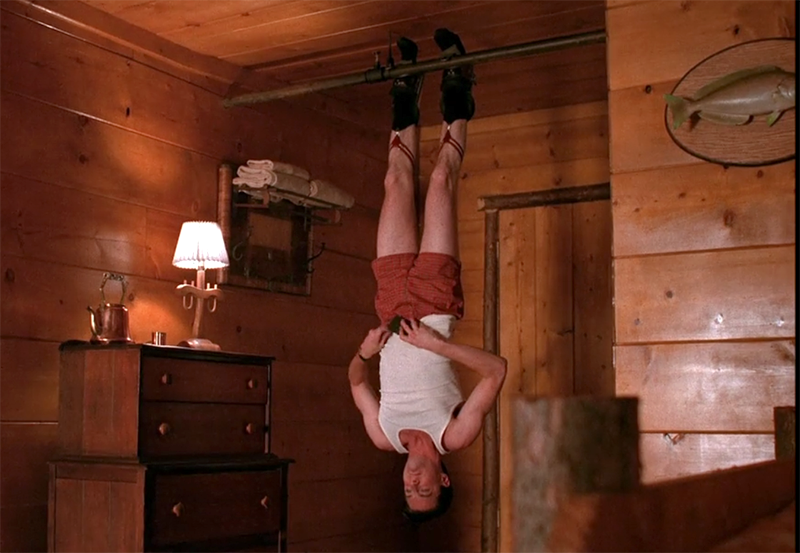 That’s really bad for the pipes, Cooper. They’re not designed for that!

Being an early episode, this one naturally brings us a lot of firsts:

The show does its best to point the whodunnit finger at Leo. “Who would do such a thing?” (Cut to Leo, and his name being said.) Leo’s bloody shirt, and his anger at it being gone. His involvement with Bobby and Mike selling drugs and “You do not know Leo Johnson.” As a matter of fact, he’s kind of the focus of much of this episode, either directly or indirectly, isn’t he? 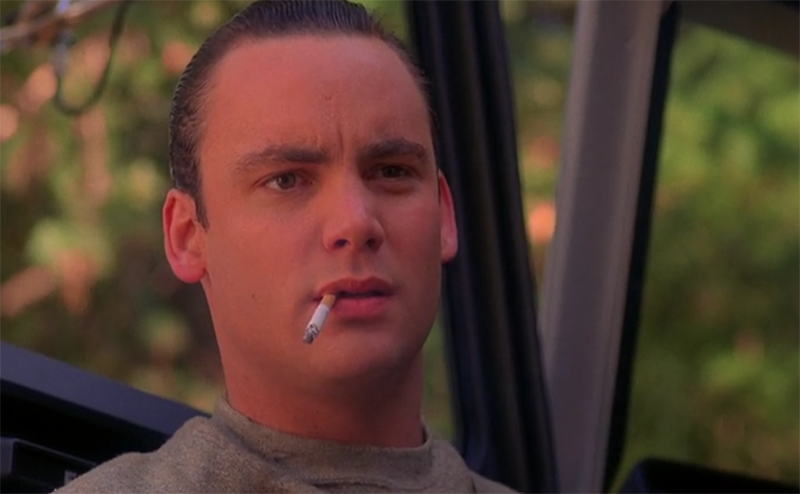 “Did you finish cleaning my boots? Did you save me a piece of pie? Did you bet on me for the ‘Who killed Laura Palmer?’ pool?”

We also get a glimpse into the dynamics of the relationships between Audrey and her father, and Bobby and his father. Is it wrong that I enjoy seeing the Major smack the cigarette out of Bobby’s mouth every single time? Major Briggs is one of my favorite characters, partially for his connection to some of the secrets of Twin Peaks, partially for how he carries himself, partially for his way of speaking.

At the end, we discover that Doctor Jacoby took the buried part of the necklace!! WHAT DOES THIS MEAN?!!! …As we’ll find out later, not all that much, aside from the fact that he likes stalking teenagers in the woods. Weirdo.

Favorite Moment:
This one is going to be another tie. (I’m terribly indecisive and lousy at picking absolute favorites, so you’re going to see a lot of ties in these posts, I’d bet.) It’s either Cooper’s “So, Harry. How long you been seeing her?” when they talk to Josie, showing us Cooper’s utterly nonchalant powers of observation… 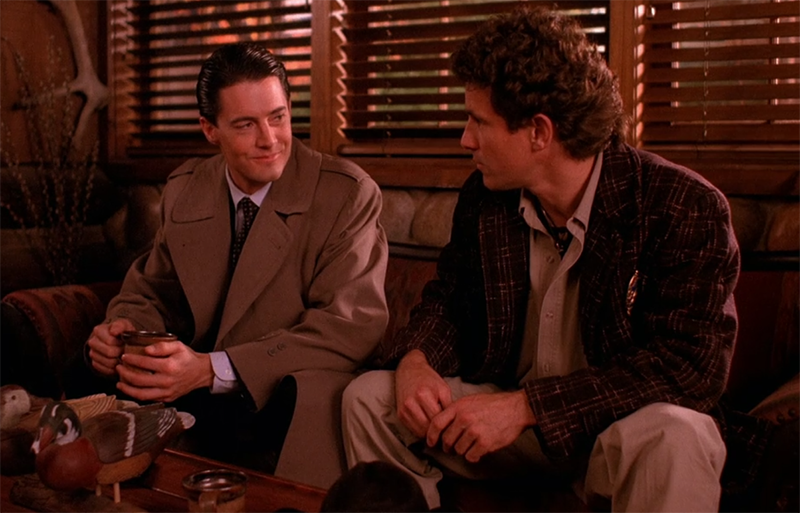 Or… Audrey dancing, seemingly to the episode soundtrack, only to have Ben come in and reveal she’s actually listening to it within the show when he yanks the needle off the record.

Least Favorite Moment:
Leo and the soap in a sock. Twin Peaks didn’t shy away from domestic abuse much, and even though we don’t see it, Mädchen Amick’s acting and the implication of what happened right after the cutaway makes it brutally uncomfortable (as such a thing should be).

Weirdest moment:
Sarah Palmer’s vision of Laura when Donna visits…and then BOB. It’s our first real glimpse of the guy, and it happens so suddenly and so creepily with him crouched behind the bed like that, it’s a nice, disturbing shock. WHO THE @&^% IS THAT??! 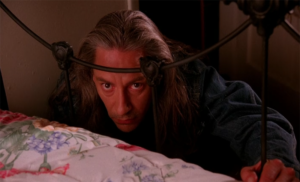 He’s looking for his deathbag.

Favorite line:
“God, James is sweet. But he’s so dumb!”
(It’s worth noting that in a later episode when James, Donna, and Maddie listen to this same tape, the tone and inflections are all different. I’ve always wondered if that was an intentional change, or just a continuity error. Anyone know?)

Things I always have to imitate when I watch:

“They got a cherry pie there…that’ll kill ya.”

Things I noticed for the first time:
Hawk gets suspicious of Mike Gerard and starts following him around the hospital seemingly for no reason beyond the fact that he’s only got one arm. Seriously, the guy just wanders by and Hawk goes all Dr. Richard Kimble on him.
-ALSO-
When Cooper enters the Sheriff’s station, there’s a guy with a blowtorch making some modifications, accounting for the difference between the pilot and the newly built set. (The Double-R got no such explanation, but…)

(By the way, the traffic light, waterfall, and tree shot counts in every post will be totals for the series to this point.) 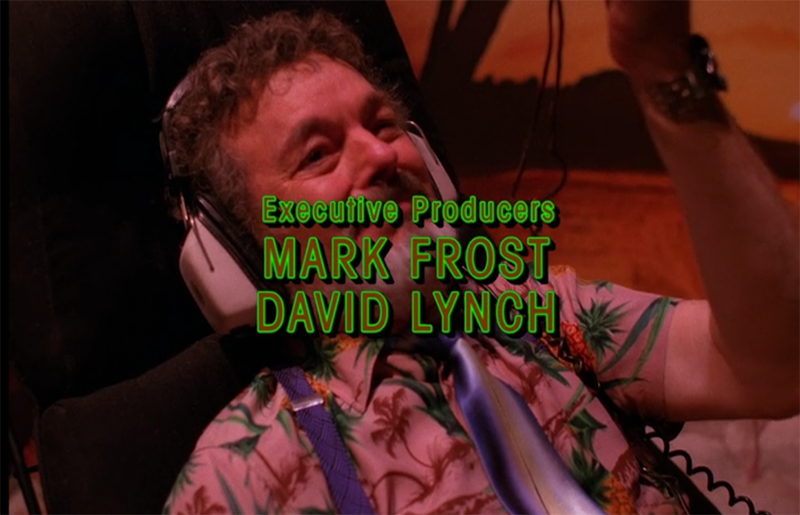 On to episode 3…
View all of my Twin Peaks re-watch blogs here!