This may be one of my favorite episodes of the whole series. Though I was already interested in the show by this point on my first viewing, I’m pretty sure the rocks & bottles weirdness and the dream sequence at the end just knocked it out of the park for me. Not to mention this is, if I recall correctly, when Albert shows up. Albert was Nick’s favorite. He was practically beside himself grinning at his first appearance. When I later showed the series to other people myself, I was just the same as Nick had been, if not more.

…At least I think this episode has all that stuff? Time to find out if my memory is as good as I think it is about all of this…

The long, silent dinner scene in the Horne household is something that both wonderfully demonstrates their disfunctionality, and something that probably wouldn’t be shown on network TV nowadays for fear that viewers would change the channel. Oh, and hey, there’s David Lynch’s director credit. Shocker. 😉 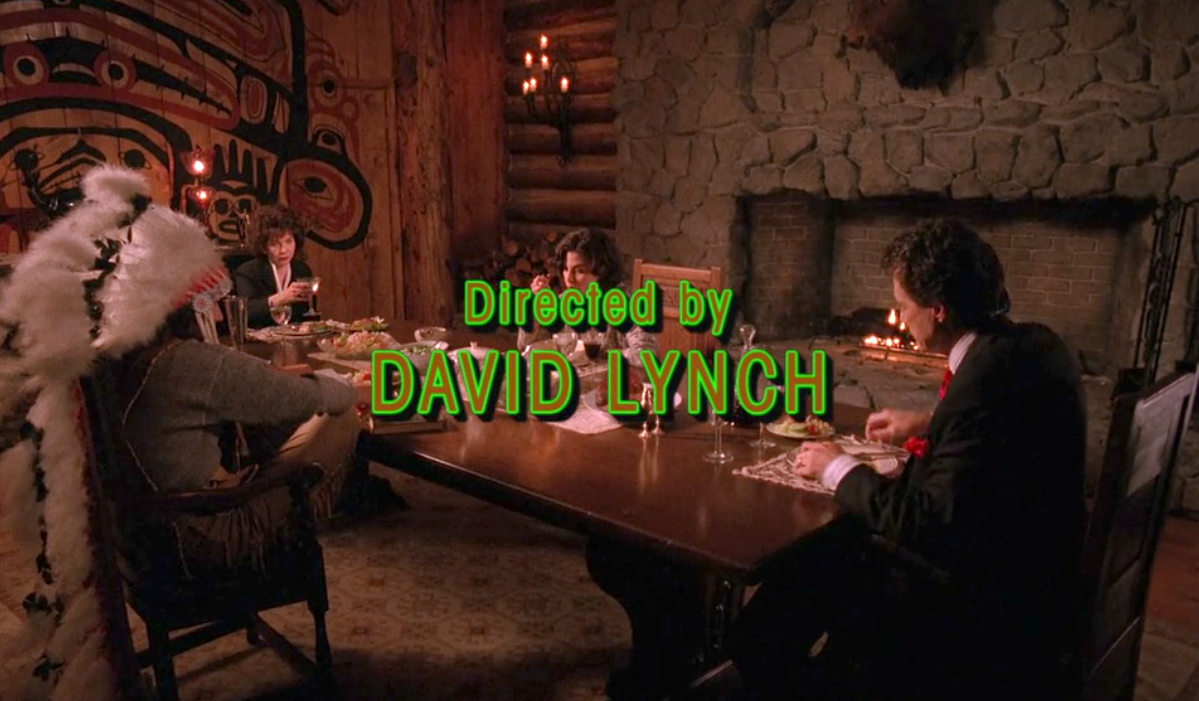 Jerry Horne has arrived! He’s a weasel, but an entertaining one. Mrs. Horne’s single word reaction tells us all we need to know about how she feels about Jerry. I love how he and Ben are always geeking out about food, and the bit here with their mouths shoved full of baguette while they talk is just as enjoyable to me as the baguettes are to the Horne boys. 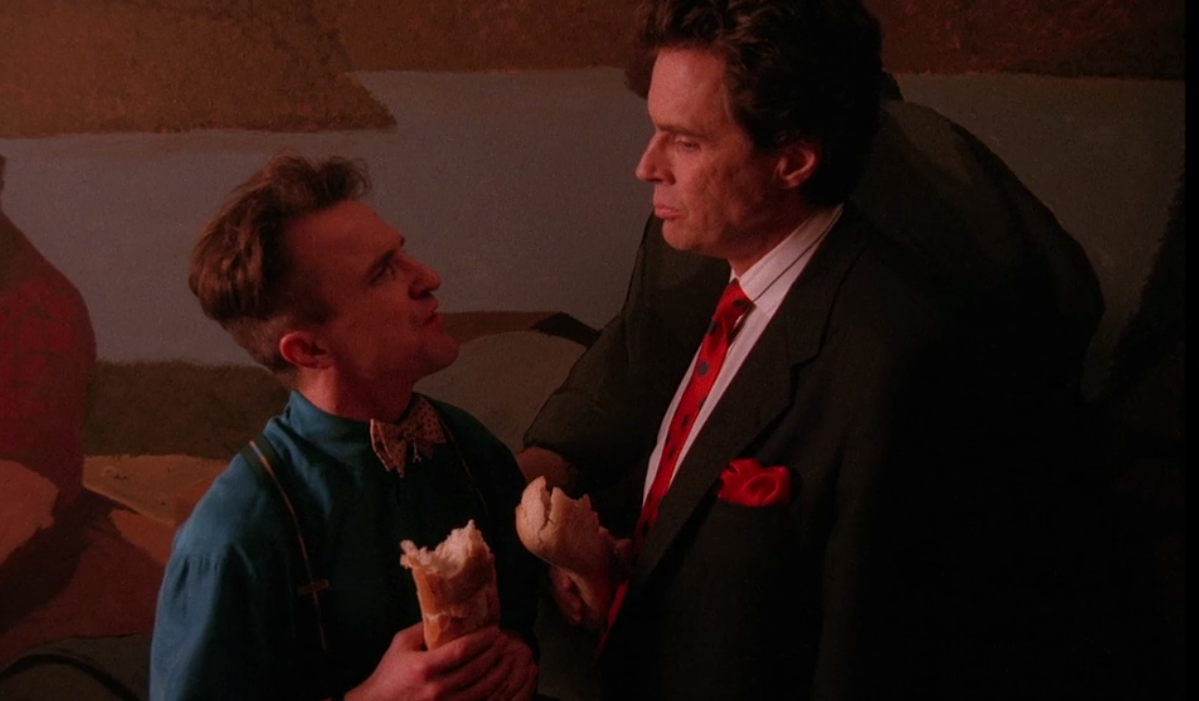 “Did you say Leland’s daughter was murdered?” “Mmhmm.” “…I’m depressed.” 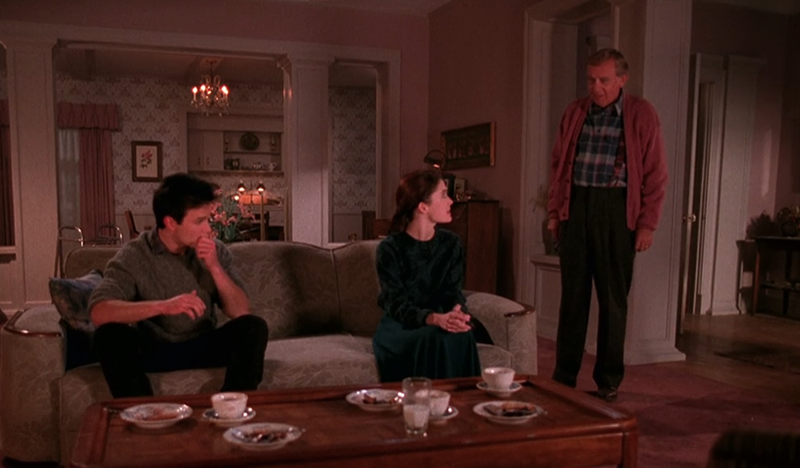 “Are you coming to church with us in the morning, Donna? Do you remember those morals and ‘Thou shalt not’s?” 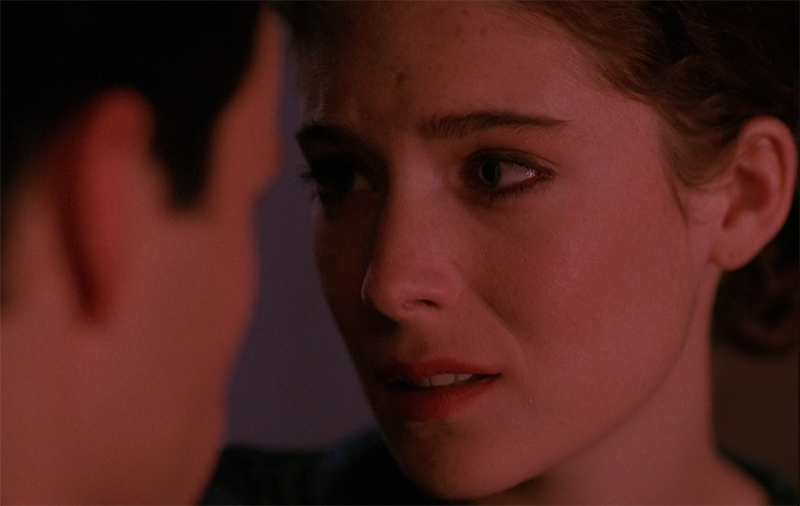 “Are we going to be together, James?”
Yes, unfortunately, and you’re both going to drive us all to drink!

And it’s time for Mike and Bobby to have their nighttime drug-meet with Leo Johnson and his shotgun. Also, Mr. Mysterious Figure Guy…who I’ve always thought was Jacques Renault. (Or maybe Bernie. He doesn’t exactly have Jacques’s girth.) Leo also hints at knowing more about Laura, further putting viewer suspicion on him. 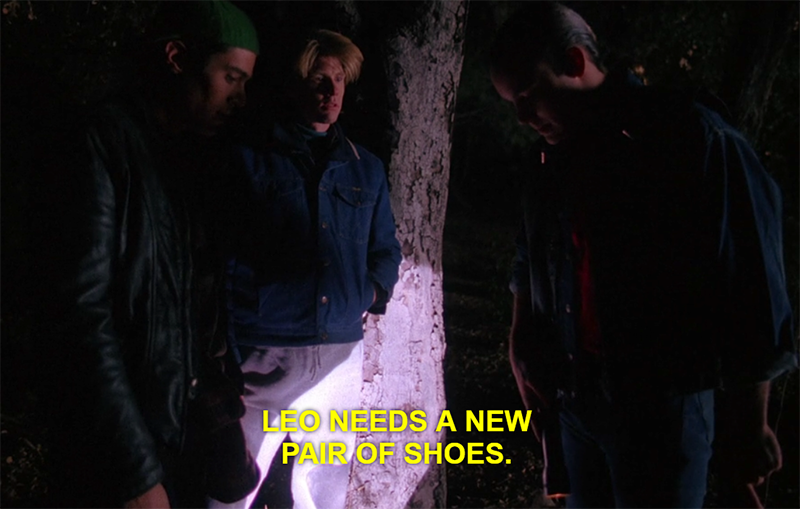 Everybody say it with me now: “Mmmmmpptt! …new shoes.”

Ed steps on Nadine’s drape runner. Then she bends the heck out of the rowing machine. Is this the only evidence of her being really strong before her coma? Or is that rowing machine just made from cheap parts? 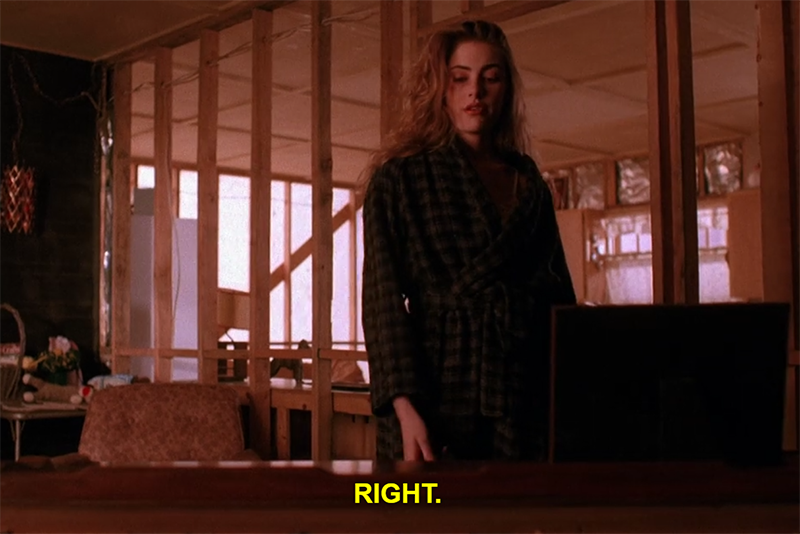 Bobby’s a lot tougher about Leo when Leo’s not around. From blood draining from his face when Leo says he knows Shelly is cheating, to swearing he’ll kill Leo when he’s alone with Shelly… (That’s the note I wrote down as I was watching. It’s not a complete sentence, but this is my blog and I don’t care.)

If anyone ever tells you that the rocks-and-bottles scene isn’t one of the most enjoyable that Twin Peaks has to offer, that person is a dirty liar who should rightfully be clubbed over the head with a frozen zucchini. I love pretty much everything about this scene, from its entire attitude to all of the little things that make it so much better. 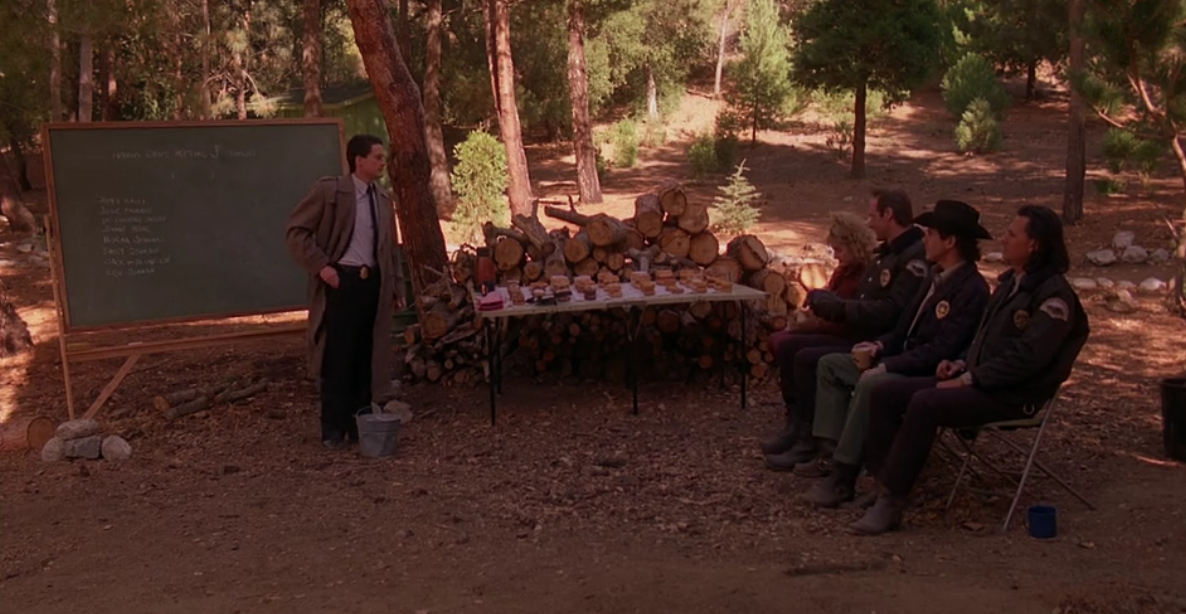 It’s important that they brought the donuts.
…and I still didn’t think to get pie or a donut for this re-watch.

I’m talking about things like: Lucy offering coffee right before rocks and bottles and everyone being so very enthusiastic. Everyone leaning forward simultaneously when Cooper starts talking about Tibet. “Would you please put on the kitchen mittens?” All sorts of little things like that are a hallmark of the series, really, and I enjoy them so much that I find myself wanting to list each one. If I did that, though, every one of these posts would be huge. …Well, maybe a little shorter mid-second season. 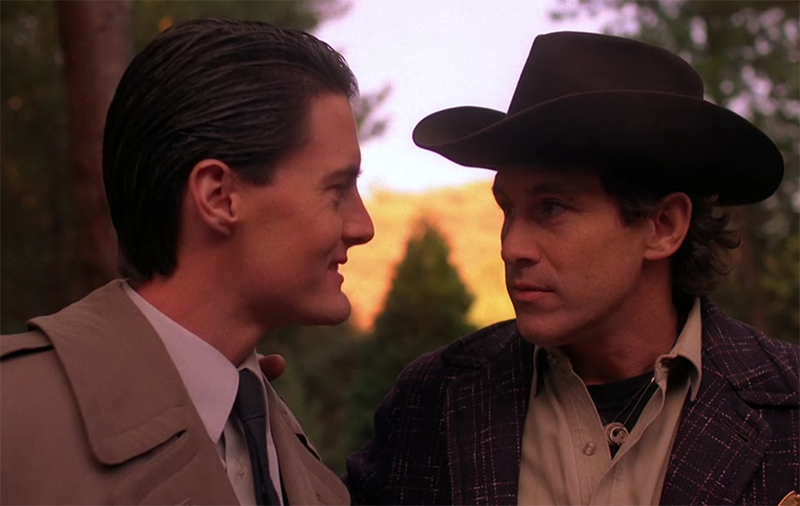 In the diner with Donna, Audrey drops a very small mention of a possible something between her dad and Laura. It’s a nice little breadcrumb to tantalize viewers trying to figure things out.

And then it’s time for ALBERT ROSENFELD!!! Seriously, I love Albert. He’s such an arrogant, belligerent jackass, but somehow Miguel Ferrer portrays him in a way that makes him a joy to see in action. I think it’s that Albert is such a pure, unfiltered personality (whose heart and intentions are ultimately in the right place) that makes him such a draw. I think, if Albert were in the series more, the character might wear out his welcome, but portioned out as he is, he’s perfect. 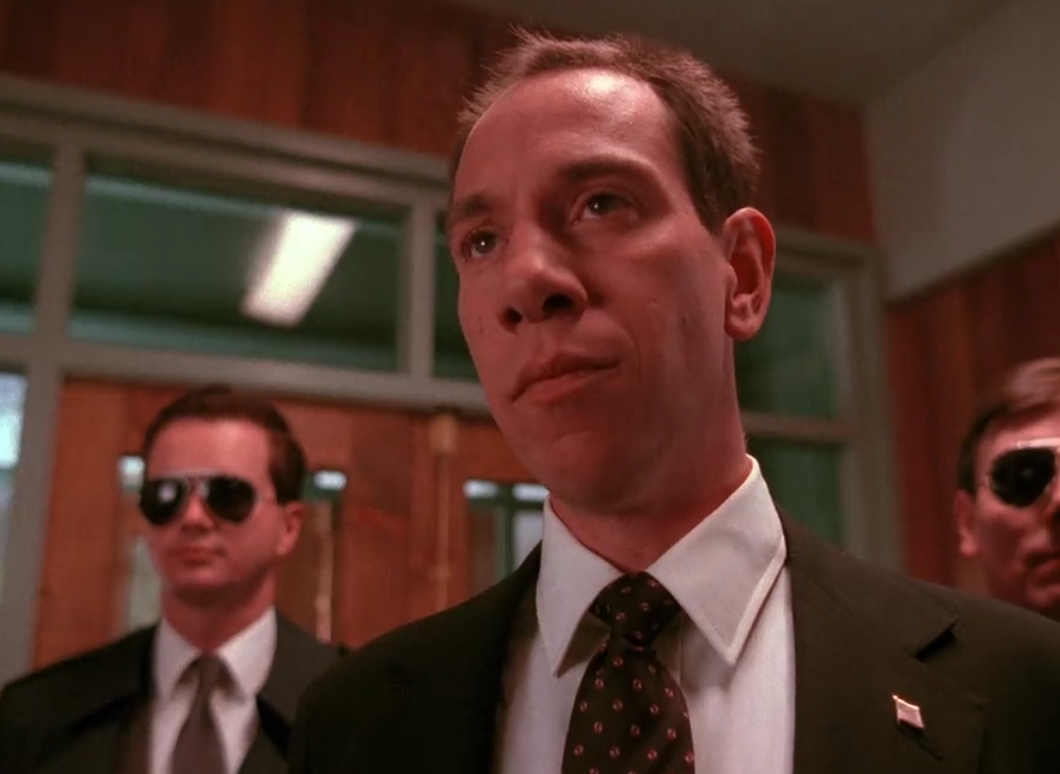 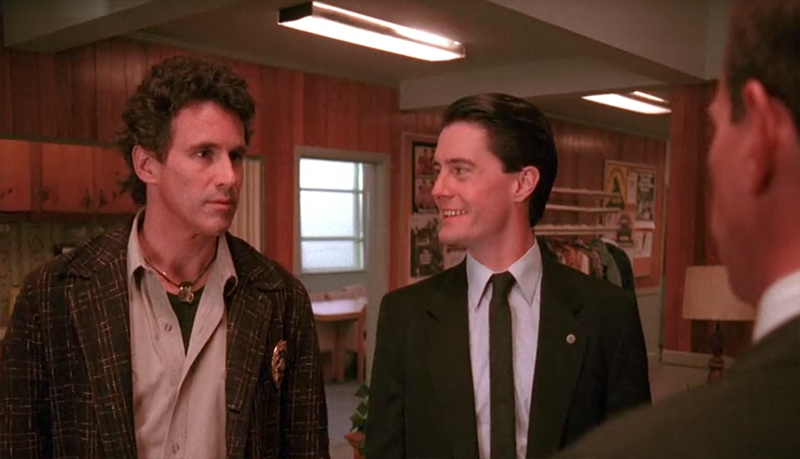 My general reaction to Albert’s arrival when showing the series to others. 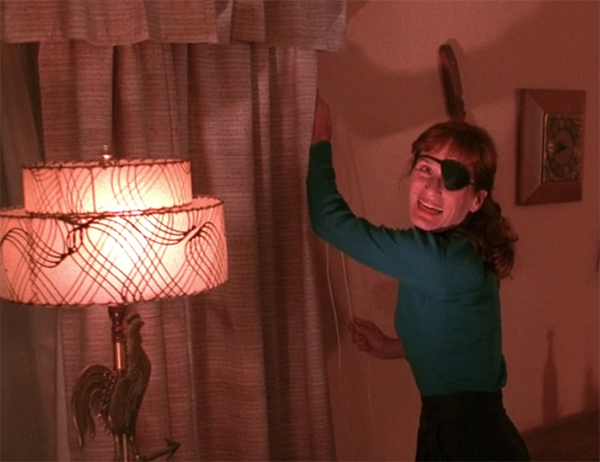 They are going to be so rich! 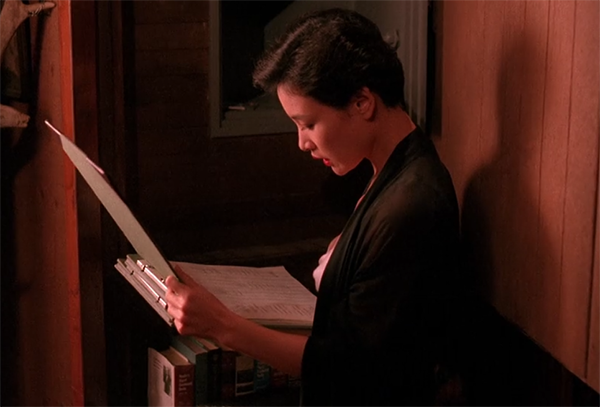 This episode brings us the first scene of Leland dancing, firing up the record player with Pennsylvania 6-500. His yelling as he spins with Laura’s picture is heartbreaking and disturbing enough, but breaking the glass and rubbing his blood all over the picture goes even further. 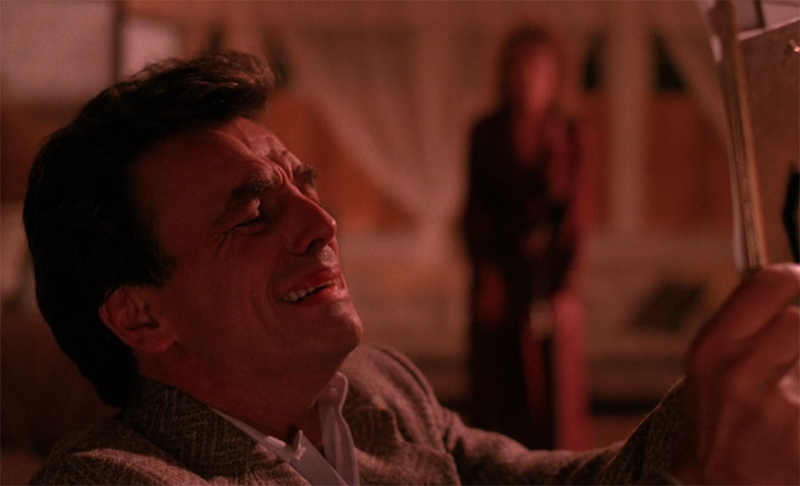 “What is going on in this house?!” What indeed, Sarah.

And then it’s time for Cooper’s dream. Ohhhh the dream, when Lynch and Frost look at each other and say, “Let’s just bump the weirdness lever up a bit, shall we?” Did you know the dream was taken from the original ending of the pilot that they made so it would stand alone as a one-off? (You can see the whole thing on the European version of the pilot, if you can find that.) It features a few other things, like Andy playing the trumpet as he and Lucy get ready for bed, and Mike shooting BOB, which Cooper will mention in his recap in the next episode. 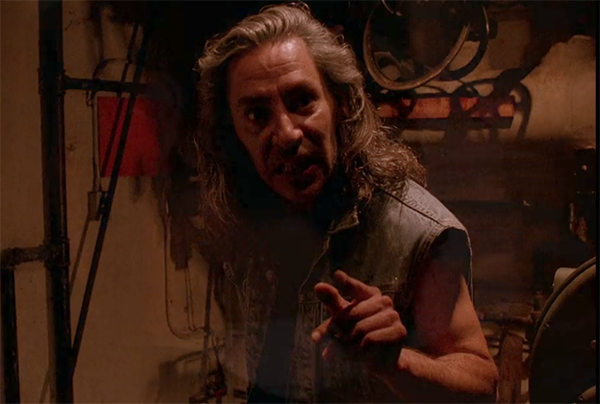 “I want YOU for the Black Lodge!” 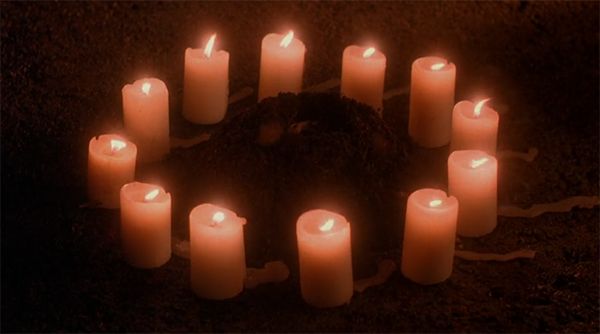 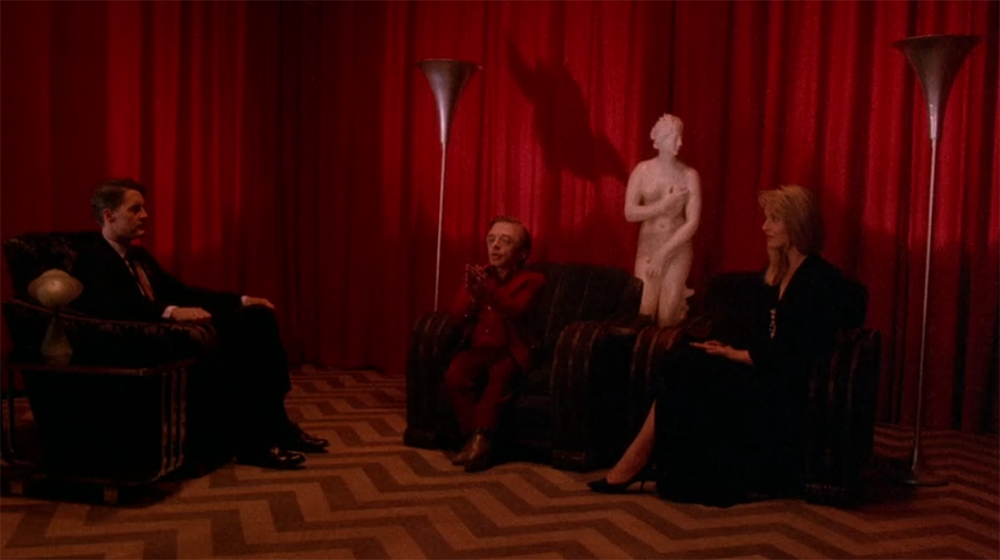 I’ve come to believe that the shadow on the curtains is the ring (viewed top down), which we don’t see until Fire Walk With Me. 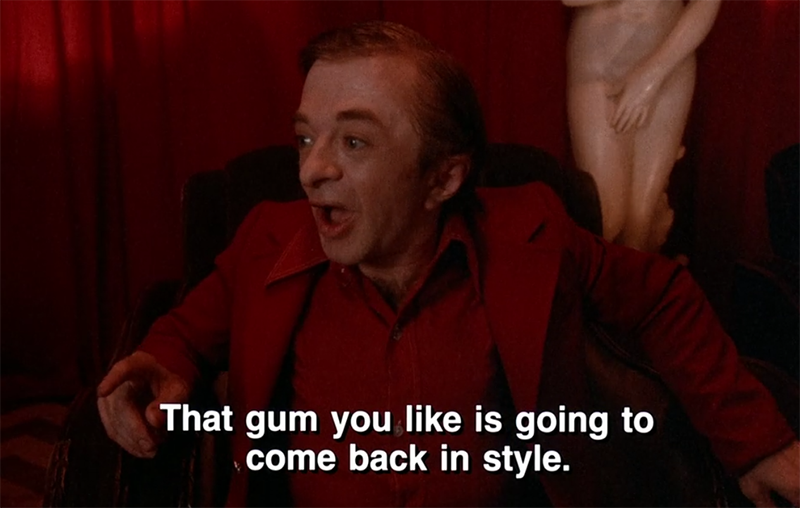 I can just see Lynch talking to Frost: “Have the guy say something weird. Whatever you want, just throw that shit in there and we’ll see if we can do something with it later.”

Favorite moments:
The whole damn rocks & bottles scene. Especially when Cooper breaks the bottle on Leo’s name and things get all ominous and somber. Can you imagine this in a court of law? “Well, your honor, the rock hit the bottle and it broke immediately, so…” OR Albert’s first scene.  Cooper honking Harry’s nose. Cooper’s post-Albert thumbs up. 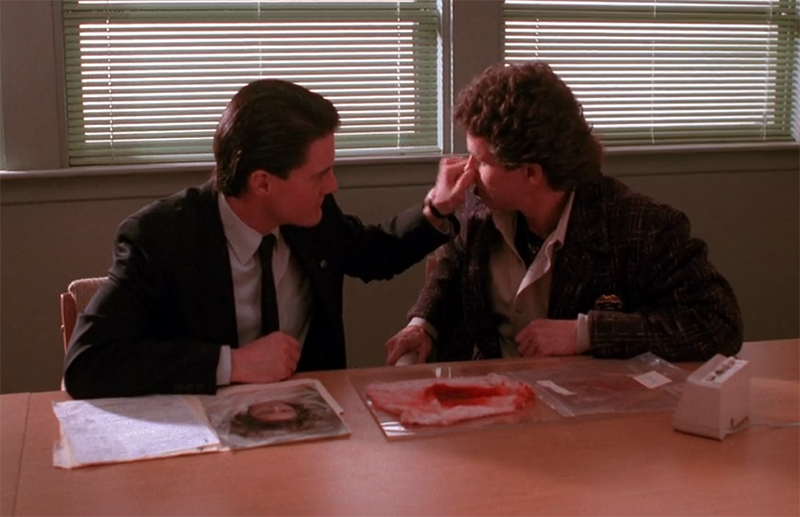 Least favorite moment:
There’s not one that really jumps out at me for this one, so I’ll just go with any time James is looking dopey.

Favorite line:
“What the hell kind of two-bit operation are they running out of this treehouse, Cooper? I have seen some slipshod, backwater burgs, but this place takes the cake!”

Things I always have to imitate when I watch:
Cooper snapping his fingers to the music at the very end.

Things I noticed for the first time:
The footage of Ben & Jerry going up the river in the boat is sped up. That, or Ben just had a LOT of caffeine.
-ALSO-
Catherine asks Pete what “that FBI man” wanted “today,” though in the episode a night has already passed between that scene and Cooper’s visit. 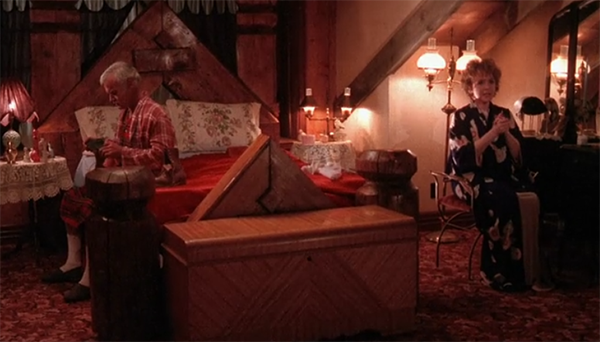 Was this scene meant to be in the previous episode? Earlier in this episode when it’s still night on the previous day? Or was Lynch just like “Screw it, I do what I want!””

On to episode 4…
View all of my Twin Peaks re-watch blogs here!