By this time on my original viewing experience (being shown the series by my friend Nick in my college dorm, as you may recall), our Twin Peaks viewings had collected other viewings, and had snowballed to at least half a dozen other regulars. I think this was about when we started knocking on doors of some people before we watched an episode, just to make sure they wouldn’t get mad at us if they missed anything.

As for this specific episode, I remember Nick cracking a joke during the funeral when the priest talked about loving Laura that implied that he was sleeping with her, too. Given what goes on in this town, I admit I wouldn’t be entirely surprised if that were actually canon. (And now I wish I could remember anything from my single read of The Secret Diary of Laura Palmer years ago.)

I’m on episode four, and I still ain’t got no donuts. 🙁

Audrey is waiting to pounce on Cooper when he comes down to breakfast. He so casually and easily draws Audrey to his table to compare her handwriting with the “Jack with one eye” note. He had a hunch and just wanted to confirm. Smart guy. 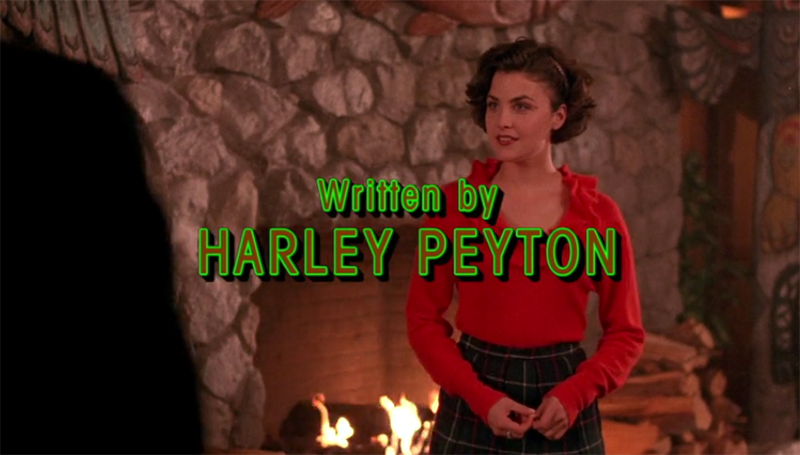 And it’s a wonderful “screw you” to the audience as Coop tells Sheriff Truman and Lucy that he can’t remember who the killer was in his dream. They both look so disappointed, as if, again, something like that would be actionable evidence. “It’s not Leo? But that violates the rocks and bottles test, sir! Which is it?”

There’s trouble at the morgue! Albert. I love this scene from start to finish. This is the only time Albert speaks to Ben Horne, isn’t it? Is it wrong that I’m wonderfully happen whenever someone talks down to that man? Did I mention that I love this whole scene?

“Mr. Horne, I realize that your position in this fair community pretty well guarantees venality, insincerity, and a rather irritating method of expressing yourself…” 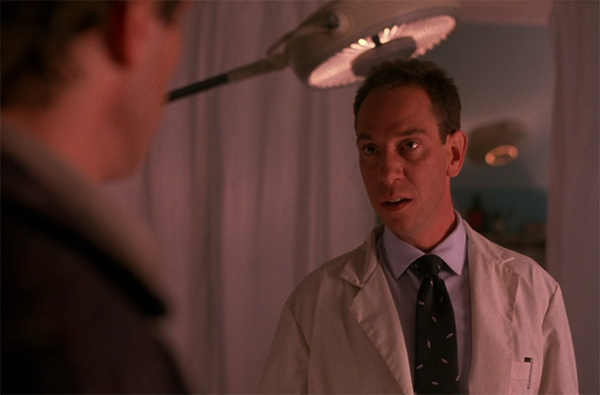 “Well, I’ve had about enough of this small town filled with morons and half wits, dolts, dunces, dullards and dumbbells… and you… you chowder-head yokel, you blithering hayseed. You’ve had enough of me?”
Hey, wait. I just noticed that Albert’s got a halo here. Curious.

And it’s another snipped of Invitation to Love, with twins “My darling Emerald. …and Jade” herald the coming of Laura’s identical twin cousin, Maddie. As I understand it, Maddie wasn’t originally planned, but Sheryl Lee impressed Lynch so much with her acting that he wanted to give her a character to play that wasn’t just flashbacks or a corpse.

And she’s just so chipper!

This episode also sets the stage for Hank Jennings getting out on parole. I think he shows up next episode? Funny thing about the scene when Norma is talking to the parole officer, he seems to make the weirdest pass at her by asking how she keeps the Romeos from her door. At least I think it’s a pass. Norma reacts–I think–as if she’s rebuffing him as she answers his question, and he looks rebuffed as he wraps it up, but… I dunno, it’s an odd scene.

At Leo and Shelley’s house, Cooper takes a moment to marvel at “Ducks on the lake!” I’ve always liked that particular character moment before he and Harry move on to question Leo and further paint the clearly-he-killed-her-bullseye on his forehead. 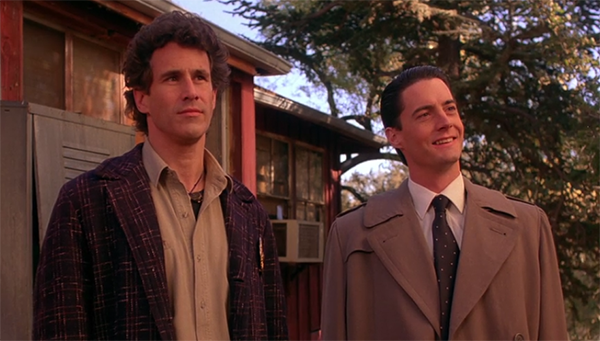 Leo gives his alibi for the murder as being in Butte, from where he says he called Shelley. People who remember well may recall that Shelley said Leo wouldn’t be home because he called from Butte–right before it turned out that he was at home.” GUILTY! …Right?

It’s getting to be time for Laura’s funeral. At the Briggs household, Major Briggs makes another attempt to make some sort of connection with Bobby on the eve of a funeral for a girl that Bobby had dated. But Bobby’s more interested in his lighter. You have to hand it to the Major. He’s trying. Clearly communicating with his teenage son isn’t part of his skill set, but he’s trying. 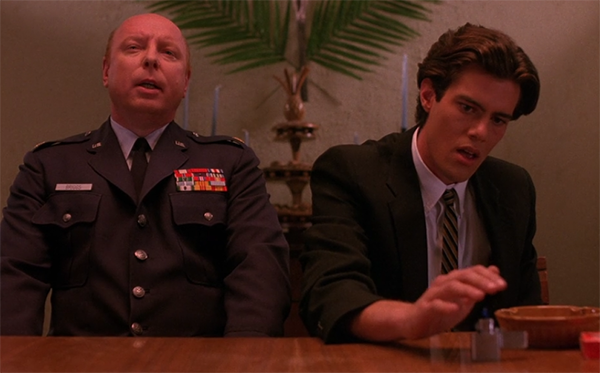 But before the funeral, we get Albert’s report on Laura’s body: Types of twine used to tie her up. A piece of plastic with the letter J on it in her stomach. Bites on her shoulders from an animal of some kind. And time to toss in one more insult Harry’s way. 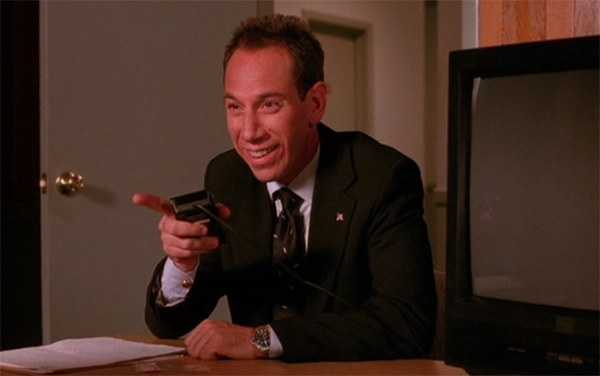 At the Hurley household, the distinct lack of love in Big Ed’s demeanor as Nadine talks about how he and Norma were such a great couple in high school brings up the question of just what happened to split up him and Norma and bring him and Nadine together. Also James can’t go to Laura’s funeral. I can’t really blame him. Just the idea of funerals somehow makes me feel awkward. Plus, with James, there’s the chance he might go so mopey that he would collapse under his own mope-gravity into a mope-hole so dense that no angst can possibly escape.

Meanwhile, up at the Great Northern, Audrey has a secret eavesdropping hidey-hole in her dad’s office. And then, we’re at the funeral itself, and the whole cast is there. Well, many of them, anyway. Bobby, as promised, tries to turn the thing upside down, scolding the town in a way that further develops the idea that Laura was deep into some serious stuff. 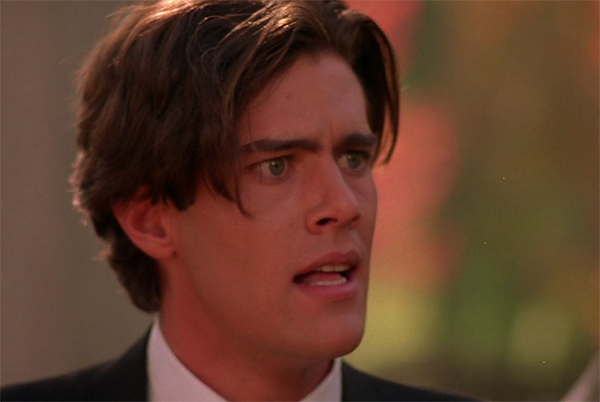 “Everybody knew she was in trouble, but we didn’t do anything!”

Oh, and then Bobby gets in a fight with James. (Apparently “I’m not going” actually meant “I’m going to stand 30 feet away.”) While everyone is distracted, in perhaps one of the more memorable scenes in Twin Peaks, Leland dives onto Laura’s coffin. Sarah Palmer’s, “Don’t ruin this, too!” adds even more subtext. Things are all sad and tragic…at least until the scene cuts to Shelley’s classy imitation of Leland’s coffin ride to the old guys at the Double-R counter, and everyone laughing.

Meanwhile, in a booth behind Shelley’s funeral reenactment: “Big Ed, how long you been in love with Norma?” Cooper’s just got zero tact sometimes, doesn’t he?

“This must be where pies go when they die.”

So it’s night, and it’s time for the full reveal of the Bookhouse Boys. “There’s a sort of evil out there. Something very, very strange in these old woods. Call it what you want. A darkness, a presence. It takes many forms. But it’s been out there as long as anyone can remember, and we’ve always been here to fight it.” Though we’ve seen evidence of that “presence” in Sarah’s visions and Cooper’s dream, having Sheriff Truman, who so far has seemed so straightforward and rational, imply some possibly supernatural element gives the concept additional weight, and enticingly deepens the mystery within the Twin Peaks world. (In other words, excellent world-building!)

Soon we’re at the Bookhouse, where Bernie Renault is tied up and questioned about his drug-muling. A normal FBI agent might perhaps raise an eyebrow at this slight…detour from normal police procedure, but Cooper’s pretty accepting of the whole thing. 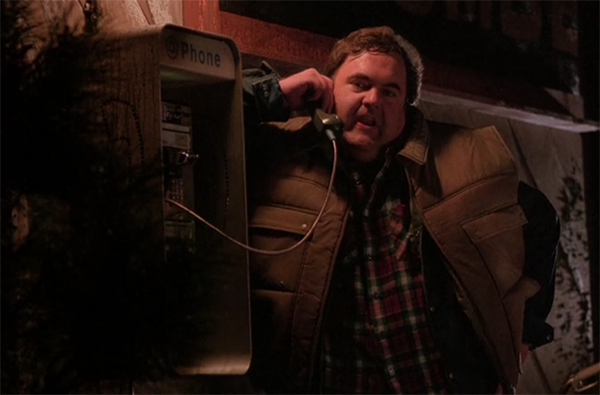 Later on, Josie tells Harry about her worries that Catherine is out to get her: On the very first viewing, I remember thinking that she was so frightened, and vulnerable. She thinks Catherine and Ben might have killed her husband Andrew; what if they decide to kill her, too?! But of course after seeing the whole series, she’s really quite the skilled manipulator, huh? 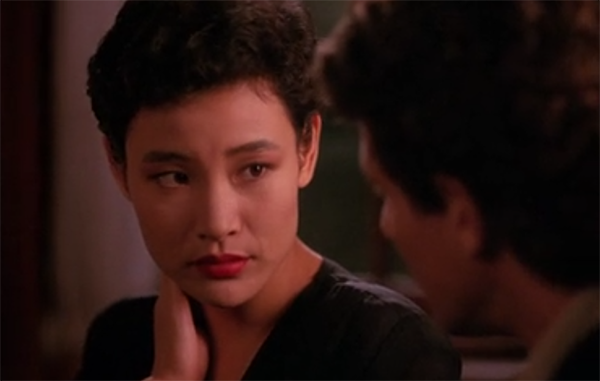 Yeah, um, you totally killed Andrew, Josie. You know it, I know it, everyone knows it.
…I mean, except for the fact that he’s not really dead, of course. But now I’m getting ahead of myself…

Favorite moment:
Two of them! Albert in the morgue (as you probably guessed), and, at the episode’s closing, Cooper and Hawk talking about souls. 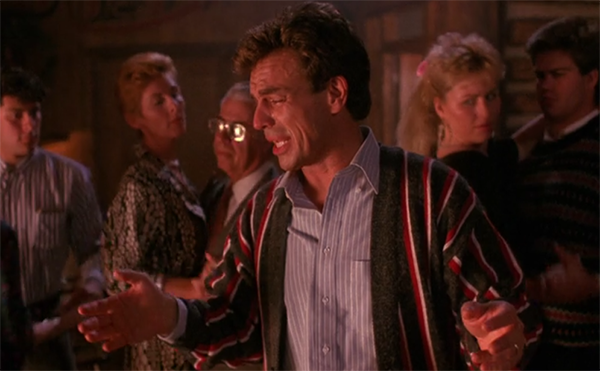 And then we’ve got this heart-breaker right after….

Leland on the coffin.

Things I always have to imitate:
Cooper ordering breakfast. “Nothing beats the taste sensation when maple syrup–“ *smack!* “–collides with ham.”

Favorite lines:
This little exchange between Albert and Coop: “He hit me!” “Well I’m sure he meant to do that.”

Things I noticed for the first time:
First, Albert’s halo in the morgue, which I actually only just noticed while making this blog entry. (Suppose director Tina Rathbone did that on purpose?) Second, there’s no sign of Mrs. Horne at the funeral. She’s heard off-screen at the hotel, but that’s it. In the shots of the Horne family we can see Ben, Audrey, Johnny…no Sylvia. In fact, we won’t see her again until the very last episode…

No Sylvia Horne. (No Dr. Jacoby, either, but that’s actually addressed later in the episode.) 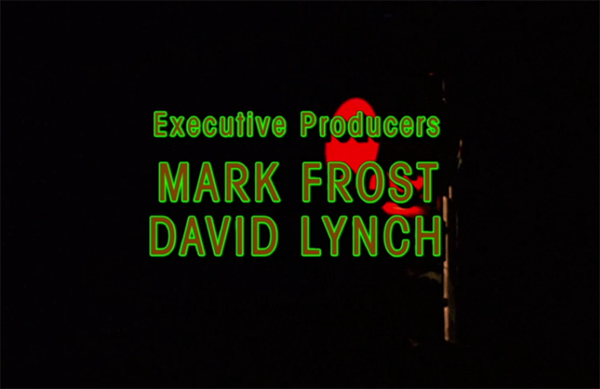 On to episode 5…
View all of my Twin Peaks re-watch blogs here!