I only remember a few things about this episode from my first viewing: Nick, who had a major thing for Sherlyn Fenn (he had a Boxing Helena movie poster in his dorm room, as I recall), going “Zing!” when Audrey told Cooper she was 18 at the start. One of the girls in the dorm lounge who was watching with us demanded we watch another episode immediately after the little cliff-hanger ending with Audrey as well. Oh, and over the course of repeated watchings, the songs that the Icelanders sing are now permanently accessible in my head, which is kinda cool.

Really, Mark Frost delivered one of my favorite episodes with this one because of various scenes: all the investigating, including a trip to the Log Lady’s and Jacques’s cabin. Major Briggs at family therapy. Audrey beginning her investigation. The whole Icelander visit. Oh, plus Leo gets beaten up and shot. Anything bad happening to Leo makes for a good episode in my blog! 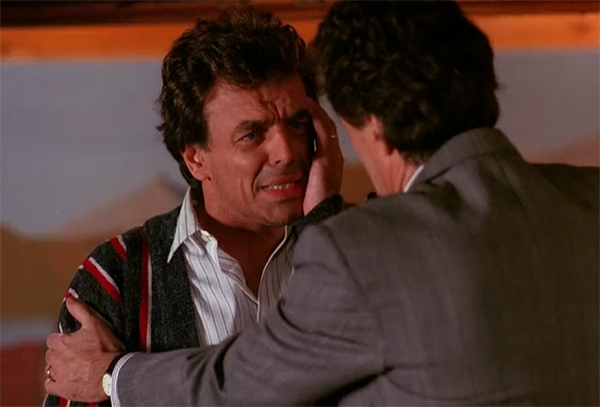 Leo’s murderer-meter ticks down a peg when it turns out it’s only Jacques’s blood on Leo’s shirt. Bobby Ineffectual Plan #1: Officially failed.

Emory Battis. Such a sleaze. The way Audrey handles him in order to get assigned to the perfume counter is very demonstrative of how practiced she is at getting her way. She’d be scary if she ever stopped using those powers for good. 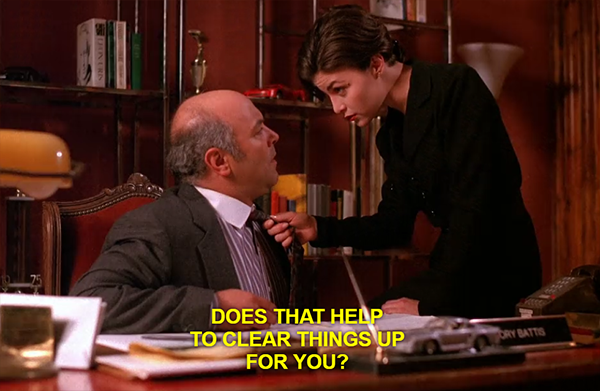 “Well I’m Audrey Horne, and I get what I want!”

Out at the Gazebo of Teenage Relationship Talk, James shares his family secrets with Donna. We never do see James’s mom. This is another James & Donna scene of vowing to do what they have to in order to find out who killed Laura. Except, ya know, they still haven’t actually done anything. Well, okay, so they start finally doing things in this episode, roping in Maddie to search Laura’s room for tapes. You know, Maddie asks for a cherry Coke and then gets up and leaves without taking a single sip. 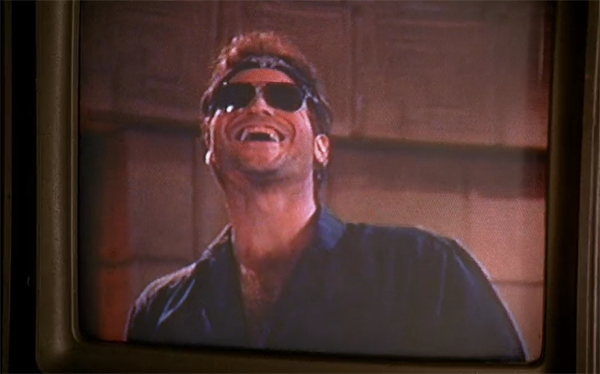 This episode has what I think is my favorite Invitation to Love moment.

It’s family counseling with the Briggses and Dr. Jacoby! And Dr. Jacoby isn’t being the best therapist here. I mean, he’s kind of interrogating Bobby using what he knows about him from Laura’s sessions as he tries to delve into her murder. But hey, it helps us viewers learn more about what was going on with Laura, her darkness, her self-loathing, and the secrets she was keeping.

Log Lady cabin! I think this is the longest scene we’ve had with her yet. (Wait, is it the longest scene with her, period?) “Shut your eyes and you’ll burst into flames.” “…Thanks, Margaret.” Great scene. Plus insight into Margaret’s mental state, and how she got there. Plus of course, there’s always the (mostly accepted?) fan theory that her log somehow holds her husband’s spirit. 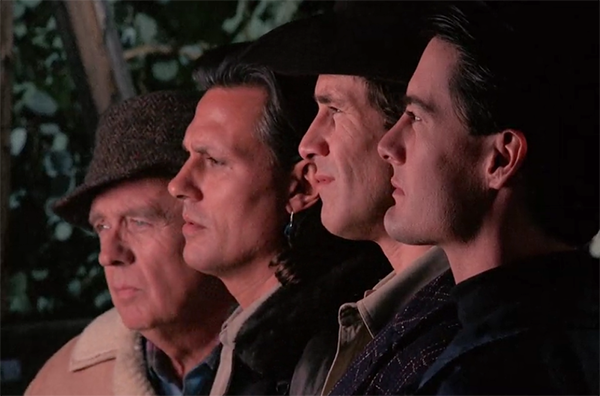 I guess some people might think the 4-man-line-up shot is a bit corny, but I’ve always liked it, especially how they come in one at a time.

Up at the Great Northern Icelander welcome party, Leland goes dancing again. This time it’s more played for laughs when Catherine joins in and turns his hand motions into a new dance, but that humor only serves to accentuate Leland’s anguish. It’s the same juxtaposition as Audrey first laughing when she finds out about her dad and Catherine (which also just happened), and then crying right after during the dance. 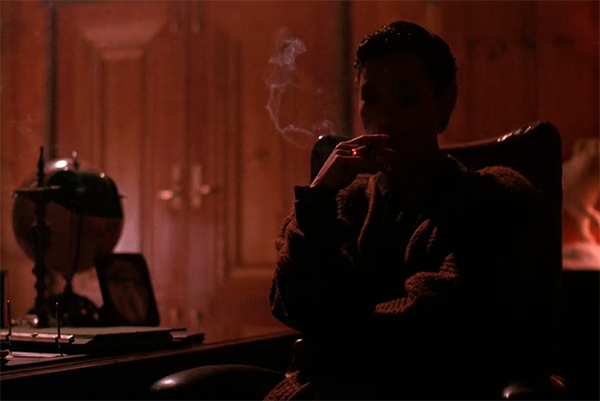 And hey, Josie isn’t as much of a victim as she seems. She’s working with Ben and being all mysterious.

Big drama at the Johnson household, too. Hank beats up Leo for doin’ the crime stuff without him, and the hits keep coming for Leo shortly thereafter when Shelley shoots him. In the course of the series, Shelley proves she has almost as bad of an aim as an Imperial Stormtrooper, and this is the first example of that. While she does hit him, she doesn’t hit him very well, as we’ll find out next episode, as I recall.

But wait! There’s more! Agent Cooper comes back to his room to find…

In hindsight, the earlier bit with Cooper (and the audience) finding out Audrey is 18 was probably largely put in in order to make Audrey showing up in Cooper’s bed slightly less inappropriate, and allow for a greater cliffhanger in terms of what Cooper is going to do next.

Favorite Moments:
Cooper waking up to the Icelandic singing, and his rant to Diane.

Bobby and Shelley quickly snapping out of their fantasy of standing up to Leo when they hear a knock at the door that they think might be him. (Fortunately for them, it’s Deputy Andy, the anti-Leo.) 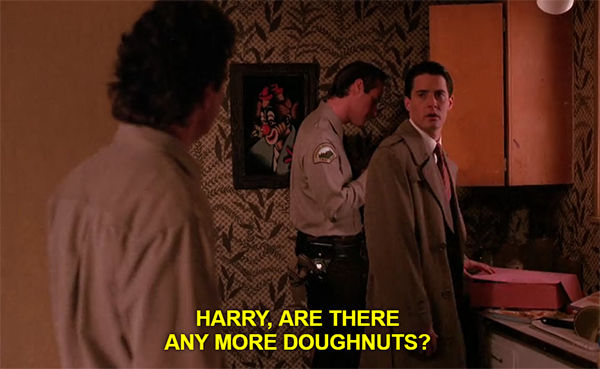 Least Favorite Moment:
Big Ed and Norma’s discussion at the Gas Farm (while Nadine is off seeing a patent attorney about her drape runners). That’s not to say it’s a bad scene. It develops character. Ed and Norma are both feeling trapped by their own decency, not wanting to hurt Hank or Nadine by telling them they want a divorce. It’s just that in an episode filled with great stuff, this rather vanilla soap opera fare doubly pales by comparison. 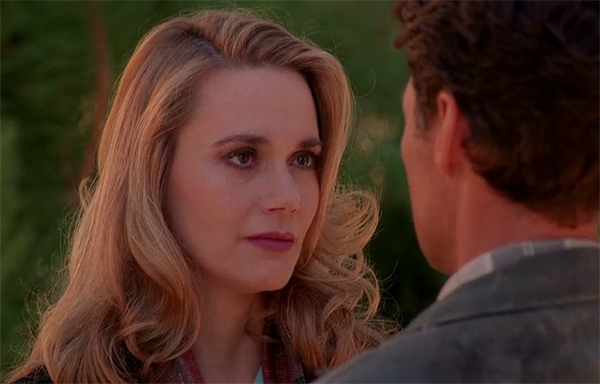 Weirdest Moment:
The shots of the crows on the way to Jacques’s cabin. Seriously, what is with the crows? I read a theory at some point, from somewhere, that proposed that maybe the crows were like the owls, but opposite. Or is that reading too much into it?

Things I always have to imitate:
Jerry’s “You crush some garlic, some fresh mint, that’s rotisserie heaven!”

Favorite Lines:
“There was a large group of insane men staying on my floor.”

“Wednesdays were traditionally a school day when I was your age.”

“Heppa, I wanna cook for you.”

“Now, let me get this straight: Your entire country…is above the timber line?”

Things I noticed for the first time:
In Jacques’s apartment: Hey, they managed to show a bong on TV! 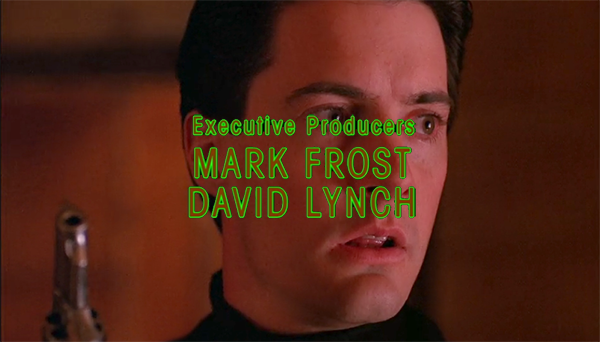 On to episode 7…
View all of my Twin Peaks re-watch blogs here!