This episode is a slow burn that sets things up to be knocked out of the park for the upcoming first season finale. Memories of my original viewing are few, but I can recall being impressed at how Cooper handled Audrey being in his room. I also recall Nick pretending to be devastated at the ruined donuts, something I guess I absorbed myself for future watchings.

Well I still haven’t gotten my act together enough to have pie or donuts when I watch, but I DO have a huge thing of cinnamon rolls. (I recently did a favor for another author, and was paid in cinnamon rolls. It’s a good gig, if you can get it.) But anyway, on with the episode!

The moon is half full. It will be half full likely for the rest of the series.

Things pick right back up with Cooper and Audrey (unlike some times in this series when we’re left dangling a while as old men wander slowly across a room or some such). “When a man joins the Bureau, he takes an oath to uphold certain values. Values that he’s sworn to live by.” Cooper’s a paladin! And as we all know, this situation ends with a couple of milkshakes and some fries. 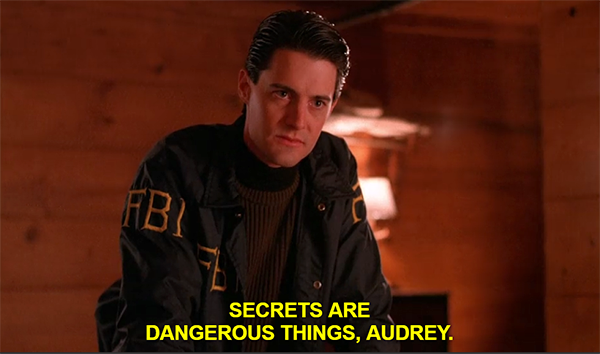 Soon enough we’re back at the police station, trying to get what will surely be some evidence that will stand up well in a courtroom from a myna bird. (Is it any wonder we love this show, folks??) 😀 Cooper is quite stand-offish back against the window: “I don’t like birds.” I wonder why? I think this was possibly covered in his autobiography book, but I don’t recall. Does anyone out there remember?

Leo’s doing okay, though his arm is wounded. And now he knows that it’s Bobby that Shelley is cheating with. Honestly, I’m amazed that Shelley stayed the night in that house. I’m not sure if that was brave or stupid. Either way, that must have been a horrible night to live through.

Audrey’s teenaged investigation into the perfume counter seems much more skillful than Donna & James’s teenaged investigation. She slips into Battis’s office and listens to his One-Eyed Jack’s recruitment conversation with Jenny. (Hey, who’s watching the perfume counter?!) Can you imagine James and Donna doing this? They’d have broken something in Battis’s office on the way in there and fallen out of the closet halfway through the conversation. Granted, Audrey’s investigative skills get a liiittle downgrade later on when she tries to pull the Hester Prynn thing on Blackie. But she doesn’t get thrown out, and the cherry stem knot thing trumps all, I guess. 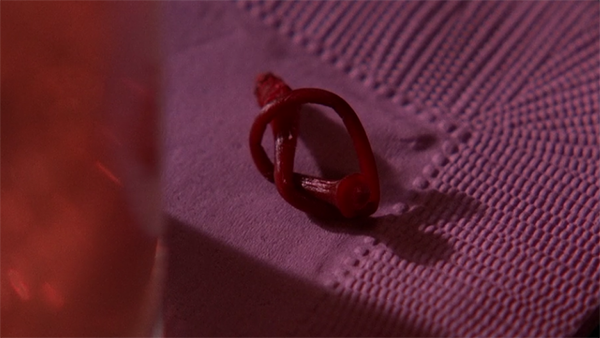 I hear this is almost exactly how Sean Spicer got that White House Press Secretary position.

Nadine is inconsolable about her drape runner rejection from the patent attorney. I do think Ed loves Nadine, though not really in a passionate way. But he does care about her well-being. He’s kind of stuck in a bad position. I’m curious to see what their situation is going to be in the revival, considering…well, everything.

Meanwhile, off in the Ben-Catherine-Josie triangle of scheming, Josie’s doing a masterful job of sewing the seeds of her victim-hood with Harry when it comes to the coming mill fire. And it’s only a concerned insurance agent that tips Catherine off that Ben and Josie are planning to double-cross her.

Didjya notice? This guy who later shows up with “Mr. Tajamura” is seen by Audrey checking into his room at the Great Northern. 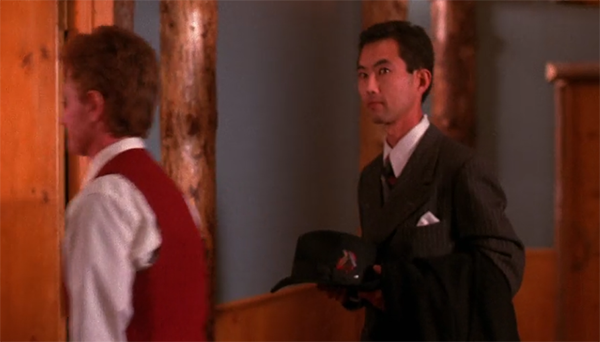 Evidence that Andrew has secretly returned already? Or is this guy just an Andrew liaison?

In one of the more iconic moments of the series, Waldo the Myna Bird gets shot through the window while giving his tape-recorded testimony. Poor Waldo. 🙁 Though Leo took pretty much the entire day from rushing off in the morning before he actually shot him, didn’t he? And there’s blood all over the donuts now, damn it! Curses, Leo! Have you no decency in you at ALL?! The irony is that everything Waldo says and heard has really nothing at all to do with the actual murder.

But soon the best is yet to come as Cooper and Big Ed partner up to investigate Jacques Renault at One-Eyed Jacks. “Hi rollers from the Tri-Cities.” “Oral surgeons, Harry!” Cooper just looks so damn delighted with the undercover gig, and their interaction with Blackie is, frankly, hilarious and cringe-worthy at the same time. 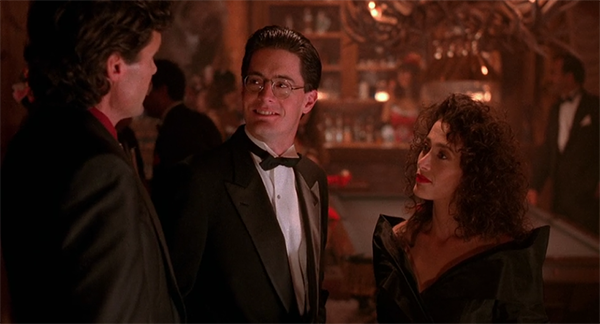 Maddie sneaks out to meet Donna and James for their Punk Dr. Jacoby scheme, and Leland’s sitting there in the dark in the living room, totally looking not evil at all! I wonder. Was Sheryl Lee wearing a blond wig on top of a brunette wig on top of her blond hair? 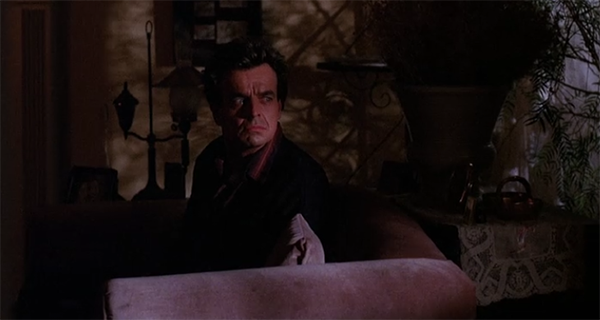 “That pizza guy should have been here by now!“

And now we have the Ineffectual Bobby Briggs Plan #2 being put into action as Bobby plants some drugs on James’s bike! 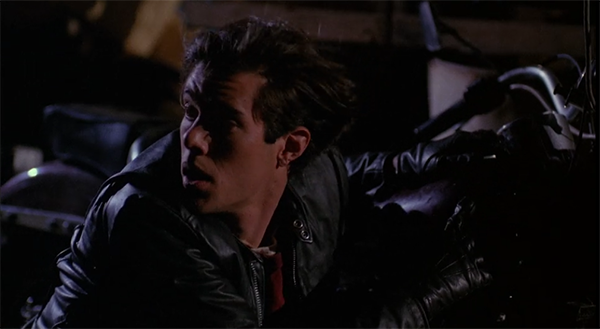 As the episode wraps up, we find that someone is watching Maddie in the park! And he’s breathing heavily! And it’s Leland but we don’t actually know that yet! Actually, I forget: Do we ever explicitly find out that it’s Leland? I know that I’m certain that it is, but I’m not sure that’s just my own logical deduction or what. I guess I’ll find out…

Least Favorite Moment:
Nothing really jumps out at me as a candidate for this, so I’m just going to go with the scene where James, Donna, and Maddie listen to Laura’s tapes. Mostly because James and Donna are there. (Okay, so I don’t really care for those two. You may have picked up on this. I don’t like them! Fight me!) 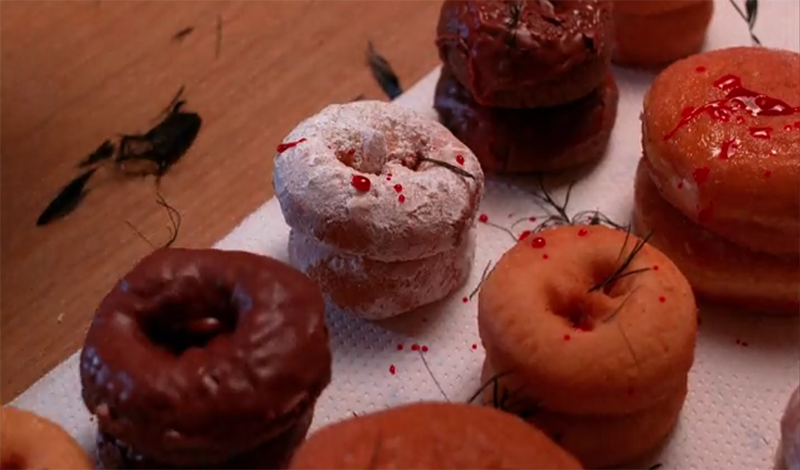 Things I always have to imitate:
Cooper’s, “Oral surgeons!” Mostly because Nick did it the first time through, and it got especially ingrained in my head.

Favorite Lines:
“Harry, I’m going to let you in on a little secret. Every day, once a day, give yourself a present. Don’t plan it. Don’t wait for it. Just let it happen. It could be a new shirt at the men’s store, a catnap in your office chair, or two cups of good, hot black coffee.”
I quote this to myself quite a bit. I might do the gift thing more than once a day, though… (Hey, I’m a generous guy!)

Things I noticed for the first time:
I never really considered this before, but they call Jacoby for Maddie to do her Laura impression, James dials the phone and then hands it to Maddie when he picks up. Can’t Maddie use a phone herself? Is he “man-dialing?” And why does Maddie just hang around in the dark park rather than meet James and Donna somewhere else? Hey, wasn’t there a curfew in effect?

On to the first season finale…
View all of my Twin Peaks re-watch blogs here!