And this is where it gets weird. I always love showing this episode to people, because it’s always enjoyable to watch how they handle the increasing supernatural intensity with the Giant showing up, and BOB becoming a more active part of the narrative. I’m sure Nick, in showing it to the rest of us in Haggett Hall 1/2 North, felt the same way. He absolutely loved the “world’s most decrepit room service waiter.” I didn’t know what I was going to get with Senior Droolcup (Albert’s other name for him that many other TP fans too to using). It just kept going, more funny and more maddening as it went on.

I can also recall us watching this one late at night, starting around midnight on a Sunday (I think?). This of course meant that after the nightmarish ending, I got to walk down a silent, empty dorm hallway to a silent, empty dorm room, and do my best not to get creeped out. I failed.

One last memory: A couple of years later, when I showed the series to my friend Rachel, she did a fantastic impression of Audrey “praying” to Agent Cooper. Amusingly, she would later move to Hollywood and wind up stage-kissing Dana Ashbrook (Bobby) in an acting class.

The credits for the premiere are extra-long. (I guess they didn’t want to put actors’ names over Cooper’s floor monologue and Senior Droolcup.) And speaking of extra-long, this episode is a double-length one, so this post is going to likely be a LOT of images and not quite so much text. So here we go… 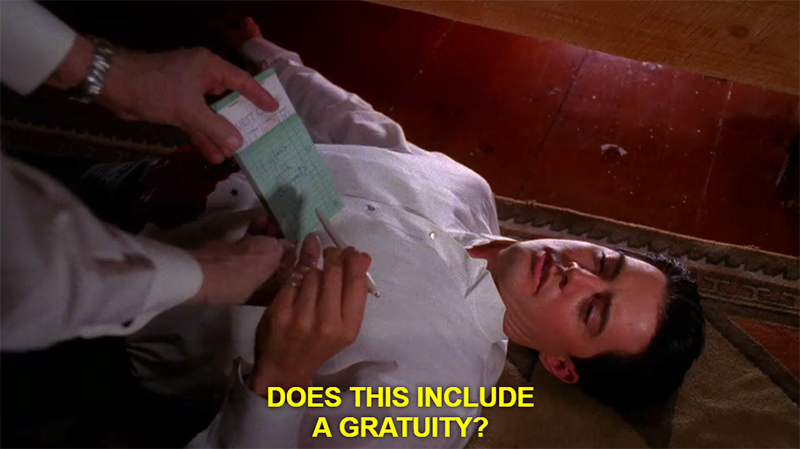 Well he has to ask so he can report it to Diane, people!!

I’ve always considered “I heard about you!” to be the Giant and the White Lodge folk saying hello. (Well, I didn’t consider it the first time, obviously, but…) Then we get the talk of a man in a smiling bag, without chemicals he points, and the most famous: THE OWLS ARE NOT WHAT THEY SEEM. 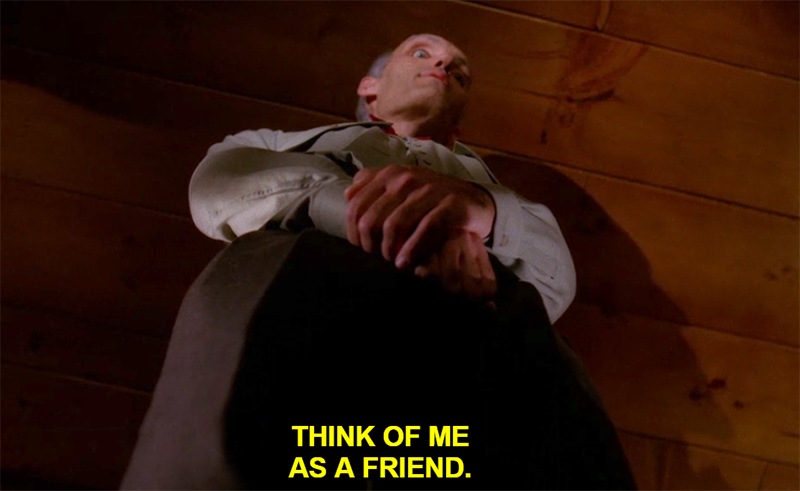 Up at One-Eyed Jack’s, we immediately see another, darker side of the relationship between Blackie and the Horne brothers. Apparently Ben has gotten Blackie hooked on heroin, though we never do really learn why Ben IS holding out on her, or what Jerry means with this… 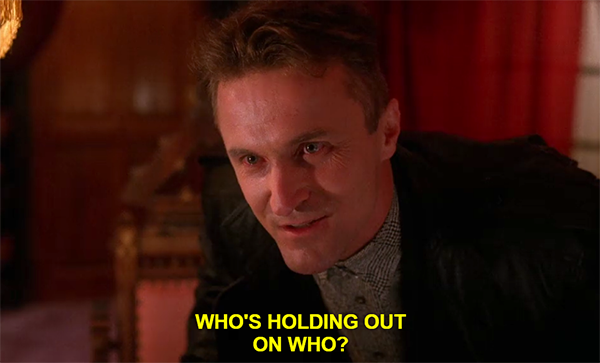 WHOM! It’s “Who’s holding out on whom,” you little weasel-monkey!!

And Ben checking out the “new girl” gets even more uncomfortable. Things are saved when Jerry interrupts, saying they have a situation and a snag. We never do find out what that is, do we? 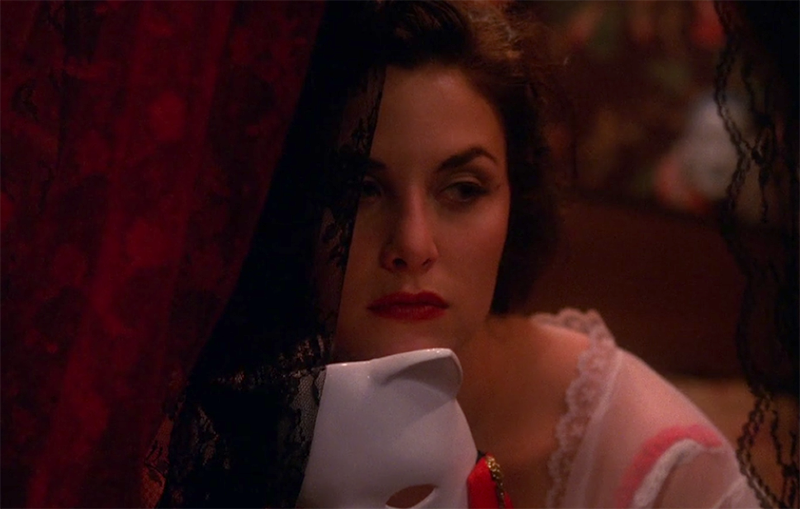 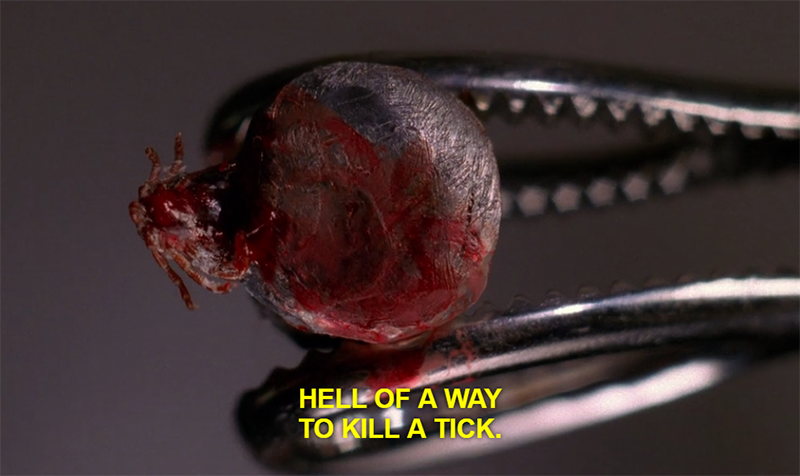 Hell of a way to kill a tick. 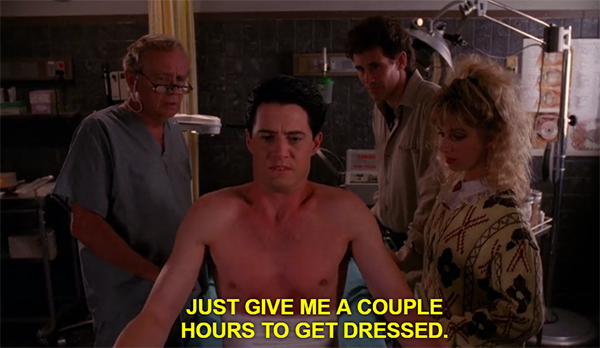 Aww, Cooper made a joke!

Incidentally, this episode does a good job of building creepy tension, such as the slow zoom in of the soon-to-wake Ronette, complete with ominous, low tones in the background. No matter how many times I see this, I always expect something to happen there, and when it doesn’t, that unresolved tension only adds to the creepiness. I wonder if part of that tension building is because I know some of the creepy stuff yet to come in this episode? I don’t recall what it was like originally. Those same ominous tones come back when Philip Gerard comes into the Sheriff’s station to sell shoes. He’s just here to sell shoes! Yet this is made to seem really frelling creepy! AAAH! FOOTWEAR OF THE DAMNED!!!

Leland’s hair turned white, and it’s still my theory that BOB is now driving completely. There is that old wives’ tale of people’s hair turning white due to a massive amount of fear, and BOB feeds on that so… Okay, so my theory is maybe only a thin one, but I’m sticking with it! 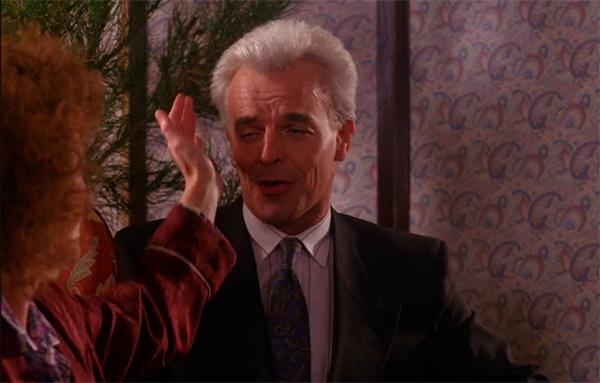 Except BOB isn’t really used to being in there all the time, so he’s…a little goofy? 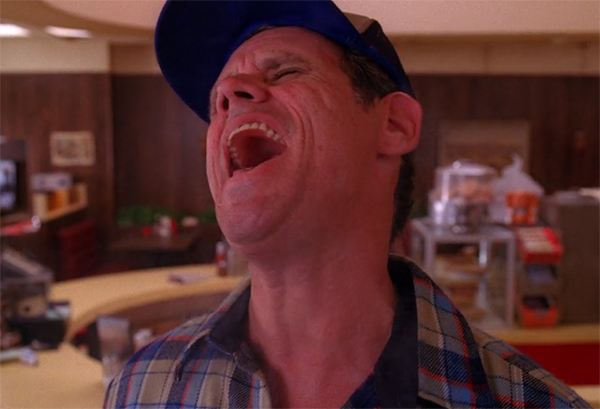 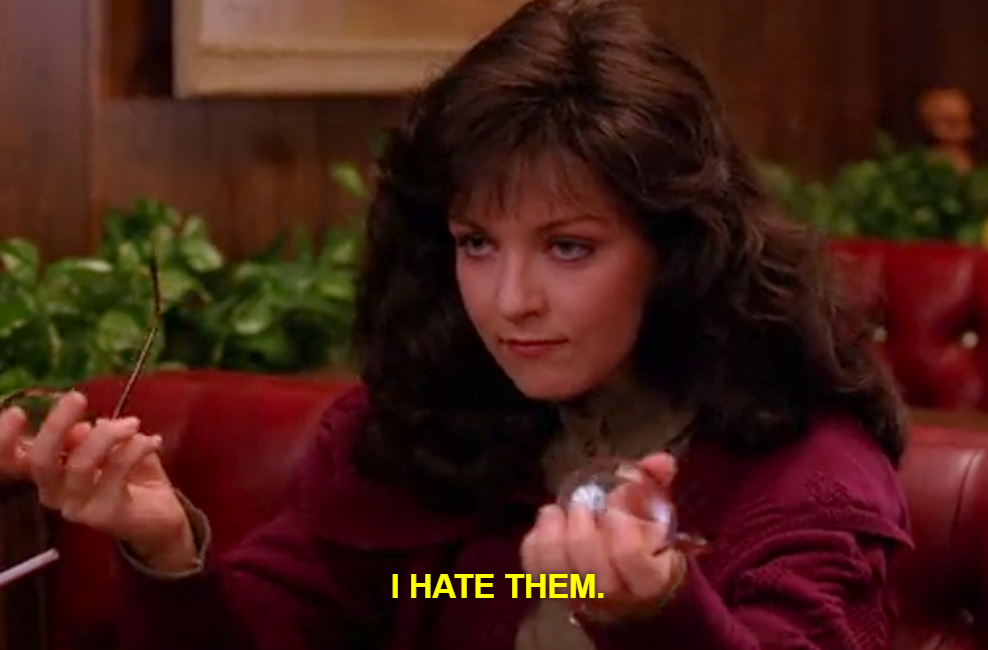 Donna gets her first note from Harold about looking into the Meals on Wheels program, which puts her on the path to being, well, relevant again. Though she also takes a turn with her own identity, acting more like Laura after spotting the way James was looking at Maddy when she wore the wig. She has Maddy bring her Laura’s glasses, she smokes, she gives James the femme fatale act when he’s in prison. 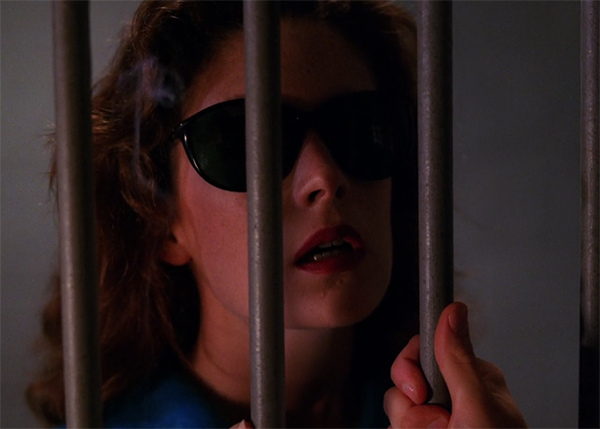 Is she just doing that to compete with Maddy, or is she just experimenting? (I’ve never been a teenage girl, but I’ve always suspected the former. What’s your take, reader-person?) 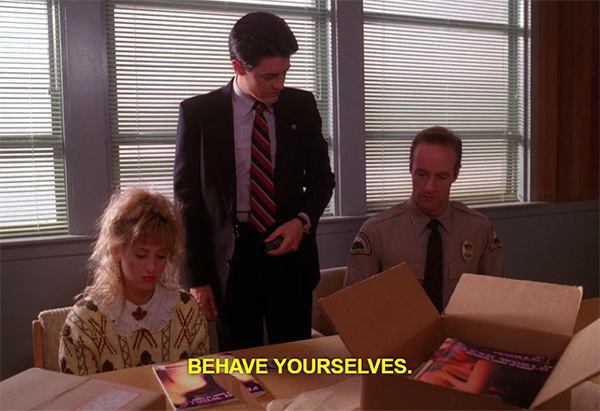 I love the recurring jokes about the food at the Calhoun Memorial Hospital, which YouTuber James Wilson assembled into one video here.

(Pete’s is my favorite.) 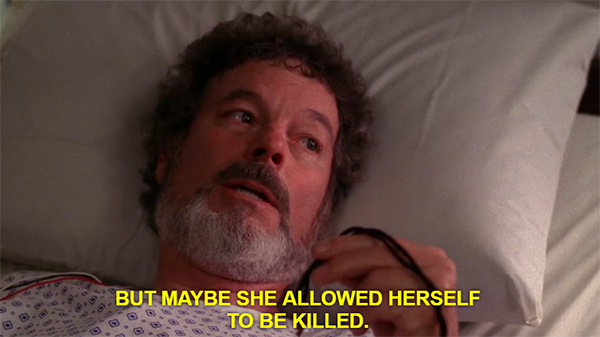 More signs Laura was dealing with some seriously dark stuff in her life.
Also, they fixed the necklace to have the leather cord instead of the gold chain. 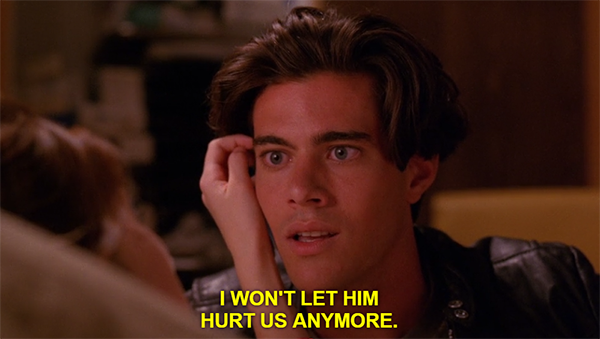 Bobby shall protect us all from that…coma patient. …who’s going to jail.
Such brave. Many strong. Wow.

Ed tells Cooper the story of him and Nadine, and how Nadine lost the eye, while a nearby Albert gives hilarious silent commentary. Ed’s story runs counter to what would later be detailed in The Secret History of Twin Peaks. The book’s version makes a little more sense in that it didn’t happen so suddenly overnight, but the change still bothered me. 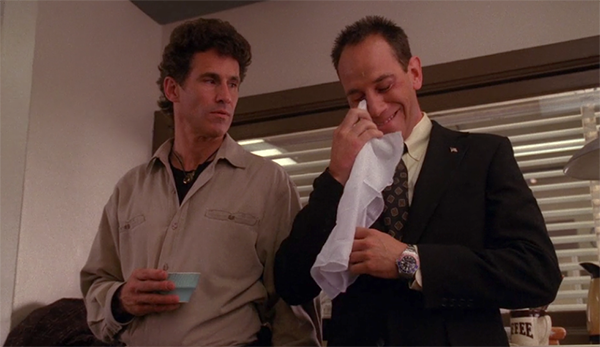 I’ll slow down slightly here to mention Major Briggs’s moment with Bobby in the diner. (Incidentally, I’d thought this scene came later in the series.) I know a lot of fans think the Major’s dream means he was dreaming of the White Lodge, but while I think the Major was taken to the White Lodge later on the fishing trip, I think this was just, as he says, the place he grew up, and a touching demonstration of how much he believes in his son’s potential. Now, did the Major have this vision because of his future involvement with the Lodge? (Time IS wonky in that realm, after all.) I don’t know. But in just under a month, we’ll get to see how Bobby’s life turned out, won’t we? 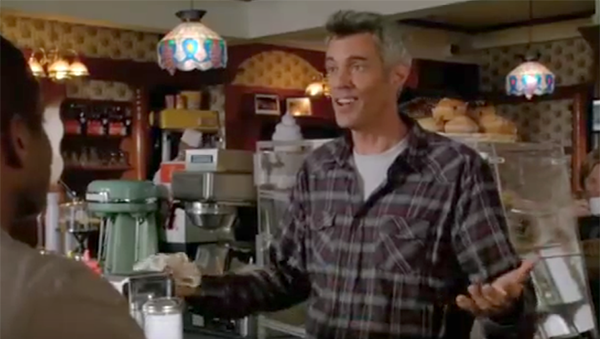 Now he RUNS the diner!!!
(Okay, actually this is a shot from a 5th season episode of Psych called “Dual Spires,” which is a lovingly hilarious TP spoof with Dana Ashbrook, Sheryl Lee, Sheryln Fenn, Lenny von Dohlen, Catherine E. Coulson, Robyn Lively, and Ray Wise. If you’re a TP fan and you haven’t see this, just…just go watch it right freaking now.)

The topic of BOB had sort of fallen to the wayside after Sarah told the police about her vision a while back. This episode does a lot to bring BOB back to the forefront: James tells Harry about Laura’s mention of BOB once. First mention of scorched engine oil. (Okay, so I guess that one isn’t a BOB reminder since there’s no indication yet that the smell is connected to the Black Lodge, but still…) When Cooper lays out what they know of the case so far he ends with mention of the third man. That scene also serves to catch viewers up on all the details after the break between seasons. It also gives another fantastic Albert & Andy moment… 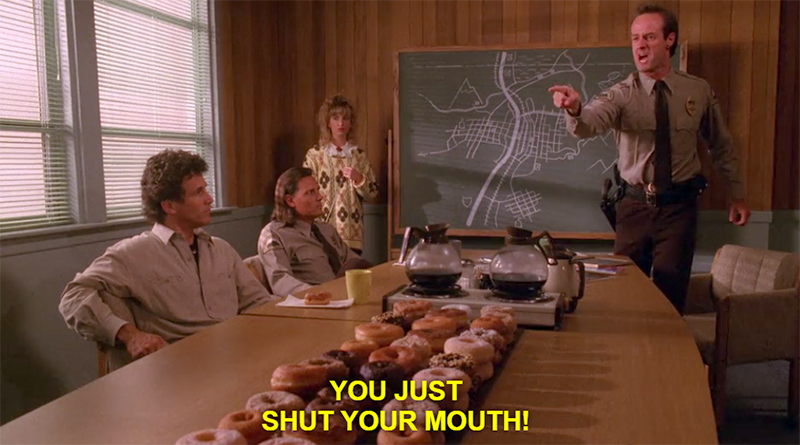 “Agent Roserfelt, I don’t like the way you talk smart about Sheriff Truman or anybody!”
Okay, so maybe Andy had two badass moments. 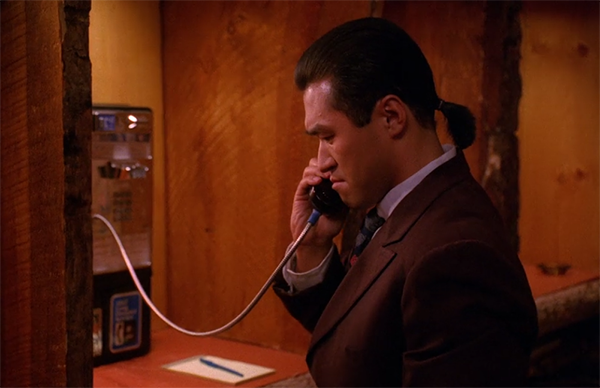 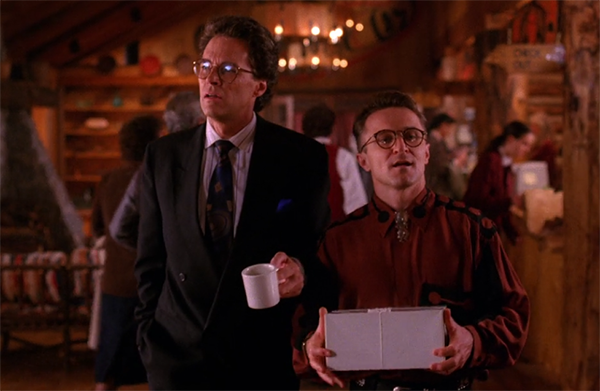 “Have you seen Audrey today?” “No, I haven’t.”
She’s up at One-Eyed Jack’s praying for Cooper to find the note under his bed!

Soon it’s time for Leland and Sarah’s dinner at the Haywards’! We (and perhaps they) discover that Donna has another younger sister, Gersten. Harriet’s poetry is still lousy. Then Leland starts singing “Get Happy,” overdoes it, and passes out. Did BOB get a little too happy for his own good? (Interesting fact: Gersten Hayward is played by Alicia Witt, who also, in David Lynch’s Dune, played Alia, sister of Paul Atreides, played by Kyle McLachlan. So really, Agent Cooper and Donna are siblings! I’VE CRACKED THE TWIN PEAKS CODE!!) 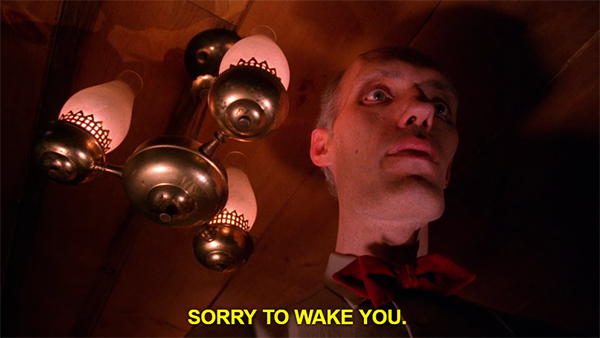 The Giant. So polite!

And then it’s time for the creepiest freaking sequence in the episode, and definitely one of the top 5 creepy freaking sequences in the whole series: Ronette’s (and Cooper’s?) memory/vision of Laura’s murder. Actually, it only really starts creepy, and soon escalates into fucking terrifying. (And why is it always late at night when I watch this part, damn it?!)

What is it that’s so damn unsettling about long, empty hallways? I blame The Shining. Or Poltergeist. 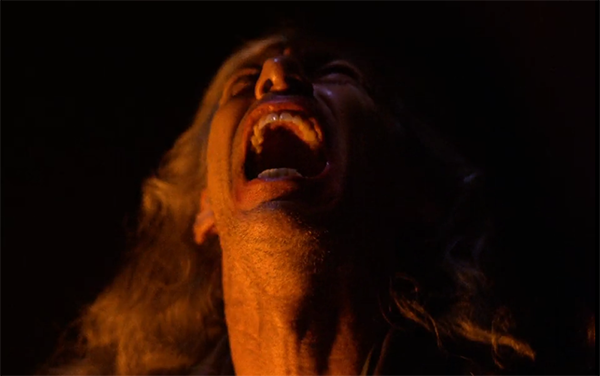 Favorite Moments:
Jerry and Ben dancing to Leland’s singing as they do their best to humor him. 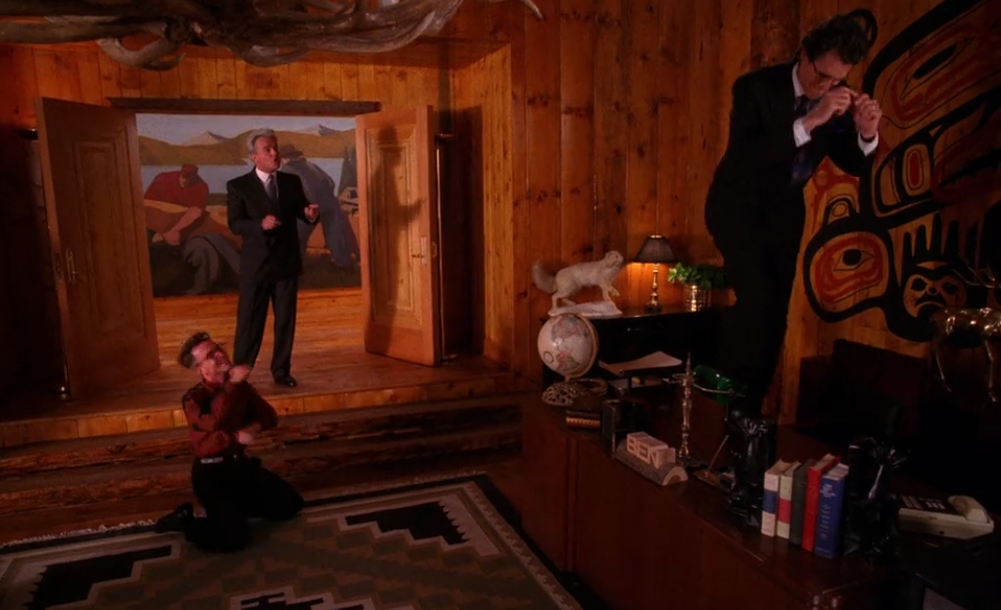 You have to love their commitment.

“It’s Agent Rosenflower!” By the way, did you know that Albert takes off his sunglasses three times, twice in the background, once in his close-up? 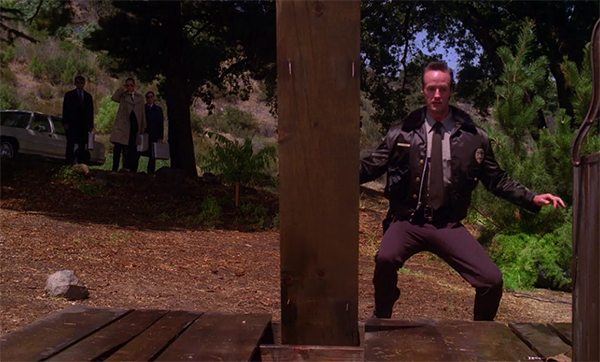 You just want to push Andy over after a while, don’t you? (Come on, I know I’m not alone in this! I’m not a terrible person!!)

The contrast when they switch from BOB’s howling to Gersten playing such a cheery tune on the piano over the end credits is kind of hilarious. 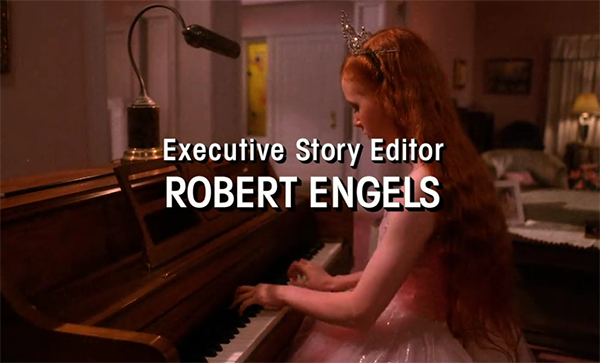 Least Favorite Moment:
Harriet Hayward’s poem. It’s not a terrible scene, really. It seems that whenever some member of this family performs artistically in some manner, it invariably irritates me. 🙂 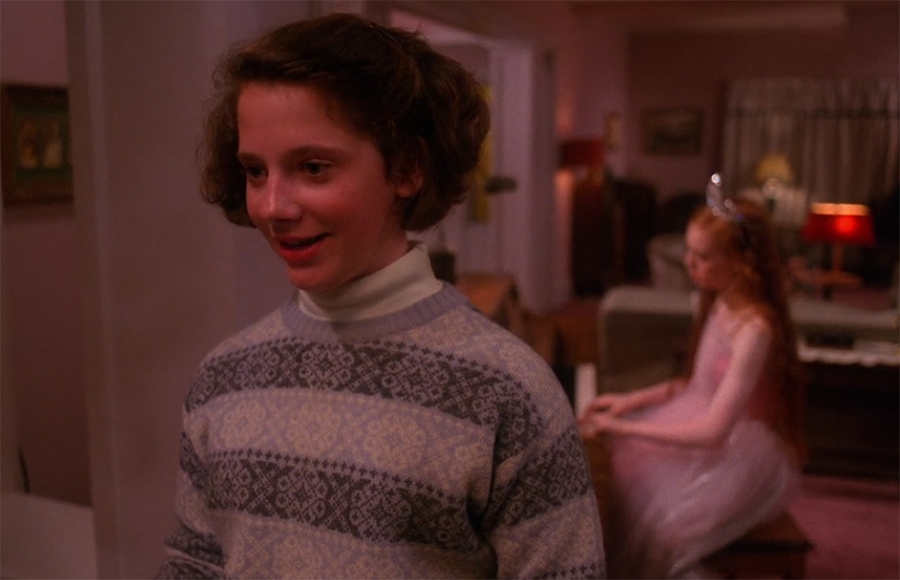 And this will be the last time we see either of these two. (Hey, think they’ll be back for the revival?)

Weirdest Moment:
I have to pick just one?? Oy. Okay, I’m going to go with the very first appearance of the Giant, since this is the first time something like this has happened in a non-dream to someone other than Mrs. Palmer. 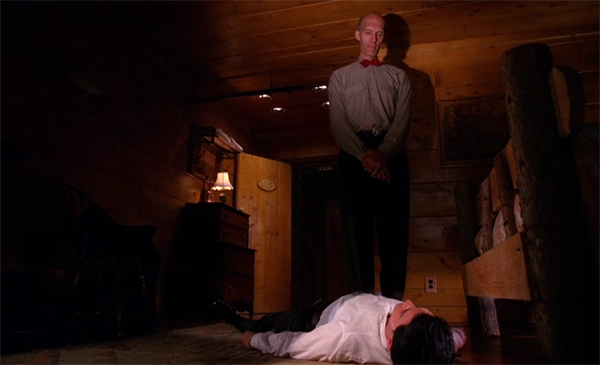 “Hi, I’m here to let you know that we’re cranking up the dial on the Weird-Shit Machine this season.”

Things I always have to imitate:
A few things Cooper says when on the floor: “Not too tall.” … “Not too cool.” And his “O-kaay…” in response to “The milk will get cool on you, pretty soon.” 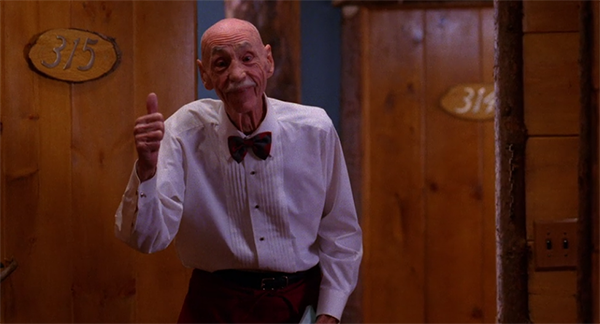 Favorite Lines:
“If you can imagine the impact on your chest of three bowling balls dropped from a height of about nine feet you might be able to approximate the sensation.”

“Leo Johnson was shot, Jacques Renault was strangled, the mill burned, Shelly and Pete got smoke inhalation, Catherine and Josie are missing, Nadine is in a coma from taking sleeping pills.”
“…How long have I been out??”

“Albert, where does this attitude of general unpleasantness come from?”
“I’ll have to get back to you on that.”

“Laura Palmer is dead. Jacques Renault is dead. Leo Johnson and Ronette Pulaski are in comas. Waldo the bird is dead.”

“I feel like somebody taped my lips to the tailpipe of a bus.”

Things I noticed for the first time:
I’ve watched this particular episode so much that I think I may have already noticed everything I could notice. At least, nothing jumped out at me this time. 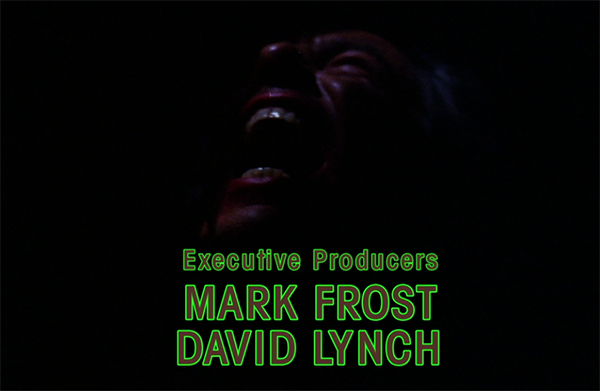 On to episode 2 of the second season…
View all of my Twin Peaks re-watch blogs here!