As much as I loathe the rest of James Hurley’s story for the rest of the season, I admit I still get a kick out of this episode’s long opening shot of him just riding his bike. Since my first ever viewing, I’ve always found myself grinning, possibly just from the sheer length of the scene. It goes on…and on…riding from a standard TV moment into something that stretches toward absurdity.

You know, I’d have loved it if the only thing the show did with James for the rest of the season was to just cut back to him riding on various roads like this for 30 seconds or so, using the exact same music each time, before cutting back to events back in Twin Peaks. Wouldn’t that have been awesome? Or at least, ya know, preferable?

Everybody ready? Here we go! 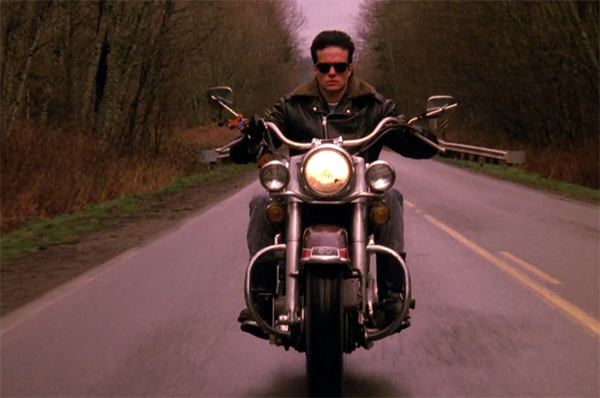 Rebel without a point.

The Less Interesting
Quickly: We’ve got the Milford wedding (which is actually a fun little interlude to get a bunch of characters together who don’t always interact). We’ve got Little Nicky’s first actual appearance. He gets taken out for a malted. (And Uncle Andy goes funny boom-boom.) And we’ve got Nadine’s interest in Mike Nelson and recruitment to the high school wrestling team. 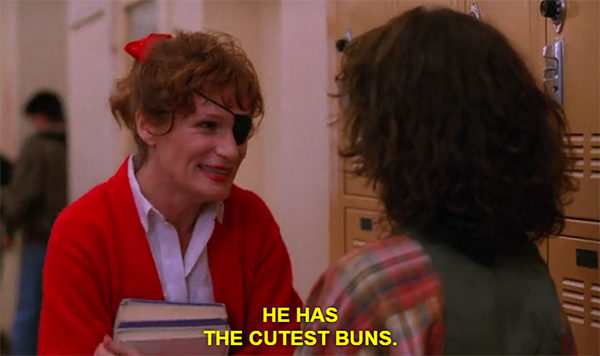 Hey, speaking of Mike, where did Philip Gerard get off to?

The Somewhat More Interesting
Ben continues his defeated descent into depression, and Hank arriving tell Ben that he’s out of the ownership of One-Eyed Jack’s doesn’t help. 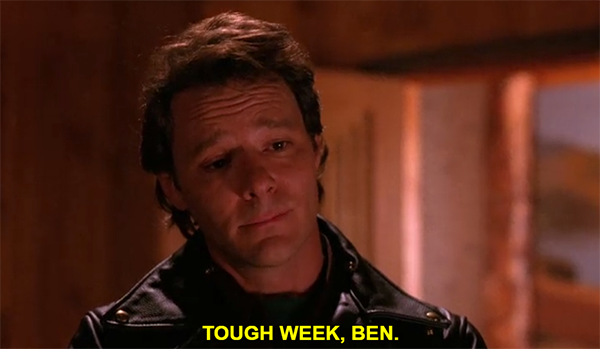 Josie is still back. She tells him about Thomas Eckhardt, how he took her off the streets when she was sixteen, how he still wants her, and how he was responsible (ha!) for Andrew’s death. Josie soon runs to Catherine for protection from Eckhardt, and Catherine pretty much enslaves her in exchange. 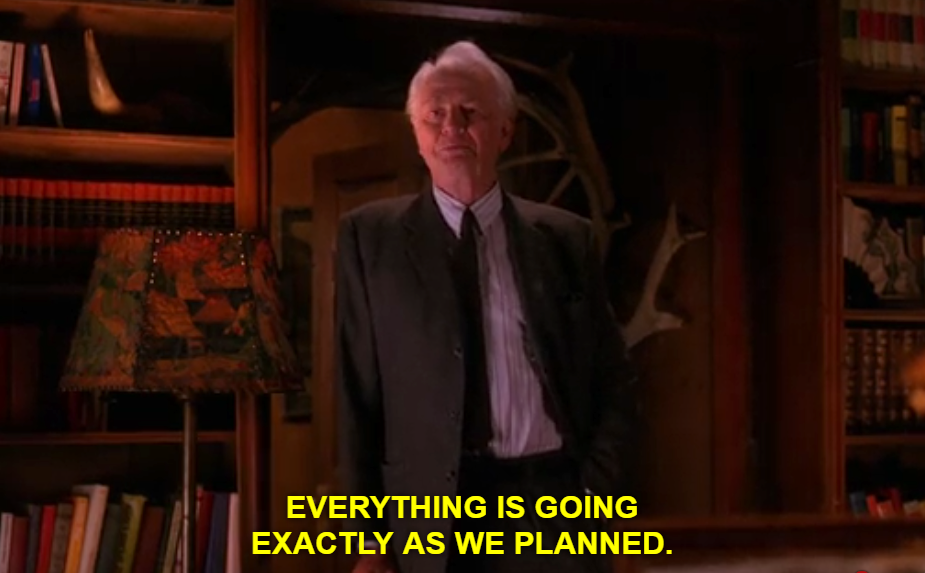 The Downright Irritating
I don’t plan to devote much time in these blogs to the near-universally hated Evelyn Marsh plot, but I’ll spare a little time for it here, if only to throw some shade at it and (re?)state my sincere wish that the writers hadn’t felt the need to come up with some adventures for James outside of Twin Peaks. What we get is an attempt at intrigue that needlessly prolongs the time we have to wait for more interesting things to happen in better parts of the story line. Honestly, it feels like an ABC executive or high school student came up with during a writers’ strike. 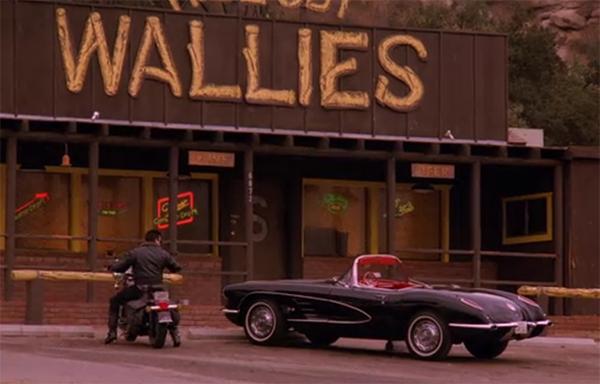 No, James! Don’t go in there! I know they’ll let you buy beer without carding you, but… NOOOO!! 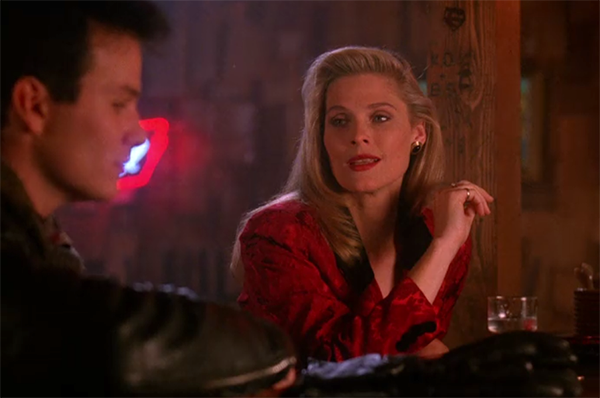 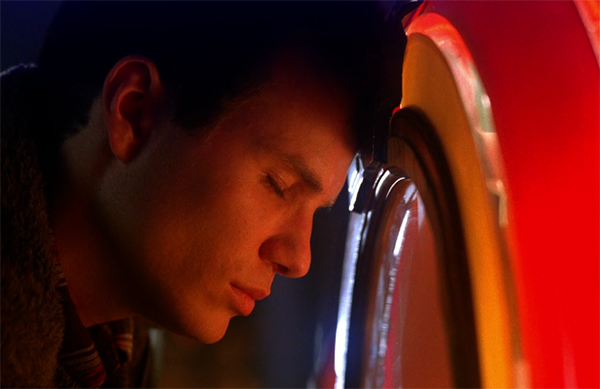 We get it, James. You have angst.

The Good Stuff
Cooper and Harry talking to Beth Briggs about the Major’s disappearance, though, in typical (i.e. positive) Twin Peaks fashion this really only serves to entice us with more questions when Cooper asks Beth if the Major has been trying to contact “some element” that lives in the woods. Beth only answers, “That’s classified.” 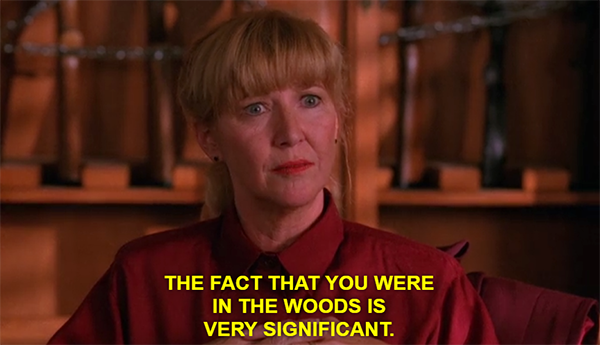 Later Cooper will tell Hawk and Harry about what the Major said about the White Lodge. Hawk tells him about the Black Lodge, where those who enter meet their own shadow-selves (or as some might call them…doppelgangers?) And now we’ve had both lodges mentioned in mysterious fashion.

Meanwhile, though Cooper has Gordon’s full support, Agent Hardy continues his investigation with the help of this marvelous, cutting-edge 1990s technology! 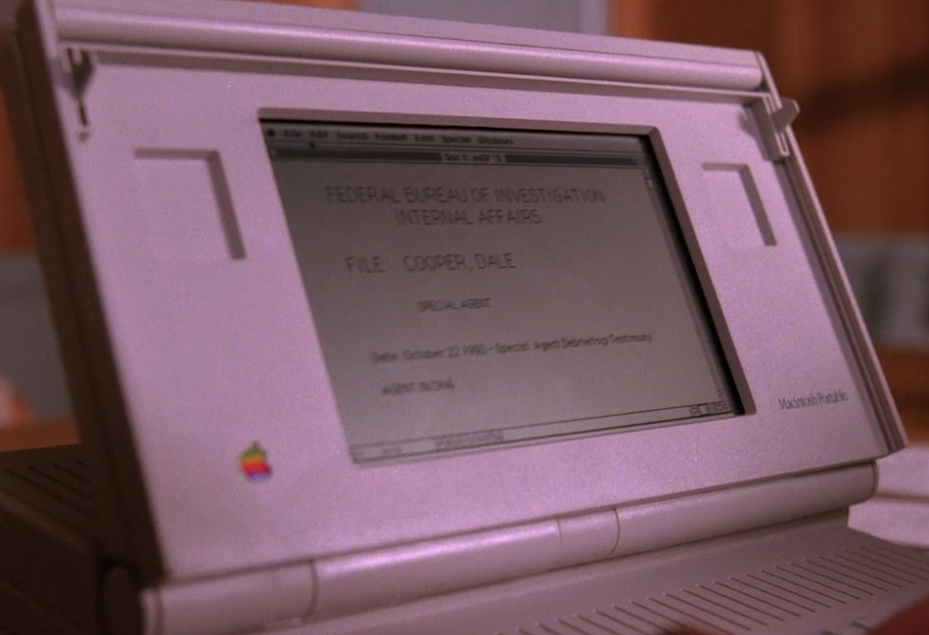 I bet this thing had at least TWO full megabytes of RAM!

Cooper takes a very Zen attitude about the investigation, which always amuses me:

“Roger. I know the moves I’m supposed to make. And I know the board. I’ve been doing a lot of thinking lately, and I’ve started to focus out beyond the edge of the board…at a bigger game.”
“What game?”
“The sound wind makes through the pines. The sentience of animals. What we fear in the dark and what lies beyond the darkness.” 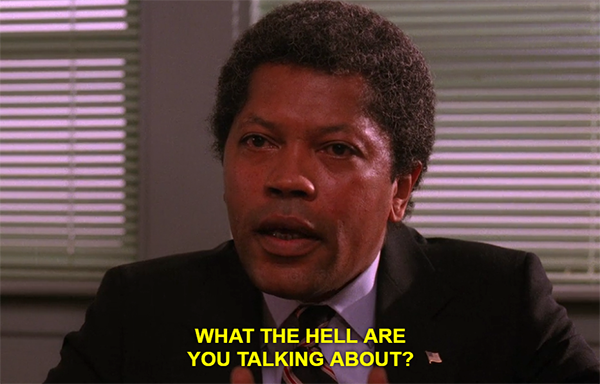 It took eighteen episodes for someone to ask this!

One blessing these less-than-stellar episodes have going for them is a certain groundbreaking character played by a little-known young actor named David Duchovny, DEA agent Denis Bryson, who’s here to look into Cooper as well. 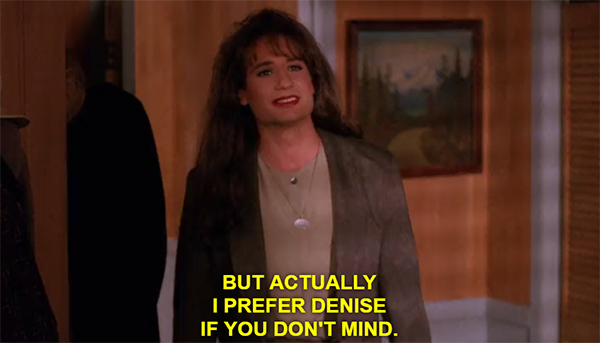 “Scully, you’re not gonna believe this.”

Everyone does a pretty good job of rolling with it, though Hawk is a bit stand-offish at first, but seems to be accepting enough by the end of the scene. Denise is also a welcome presence because, while clearly interested in justice, she also is an ally for Cooper in a rough time, which is always a good character reference. 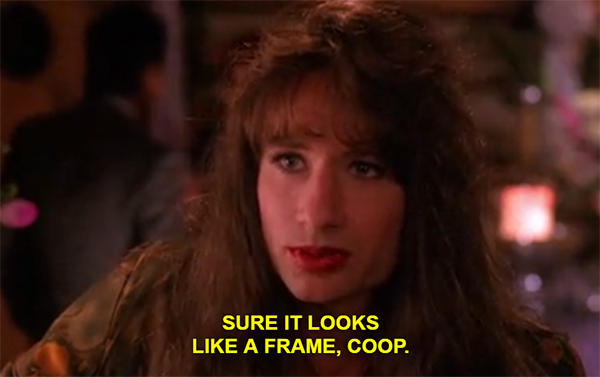 Lastly, but not leastly, the chess game with Windham Earle, pretty much forgotten by the on-screen narrative since his opening move, gets some play again. We also hear Earle’s voice for the first time as he, well, chess-trash-talks Cooper via tape. 😀 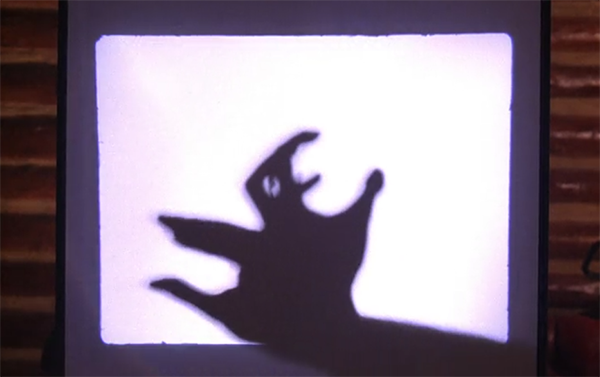 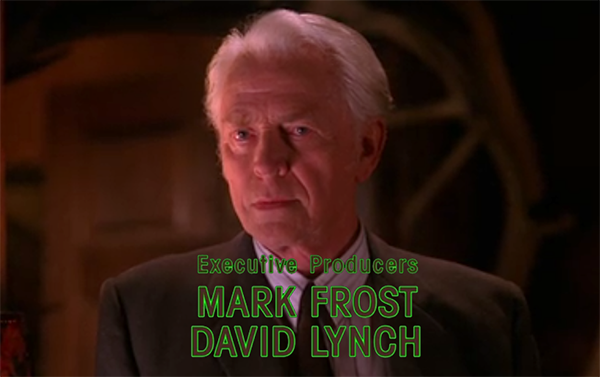 On to season 2, episode 12…
View all of my Twin Peaks re-watch blogs here!