You know, it’s strange. The first time I saw this episode (and the rest of the series), I really had no problem with Billy Zane’s character. I thought he was a good match for Audrey somehow, and–well, really, I don’t think I gave him all that much thought beyond that. Now, I find him bothersome. Not on Evelyn Marsh levels of bothersome, mind you. Not even James Hurley bothersome, but…somewhere around there. I’m not sure if it’s just that I’m older and more critical now, or if it’s that, the first time, I didn’t know where his story line would go, so there was, perhaps, more mystery and possibility about him. Knowing now that what we see is all we get, he’s just kind of blah and annoyingly suave.

John Justice Wheeler could almost be an author-insert/Mary Sue character. Maybe that’s what bothers me. Does the guy HAVE any faults? 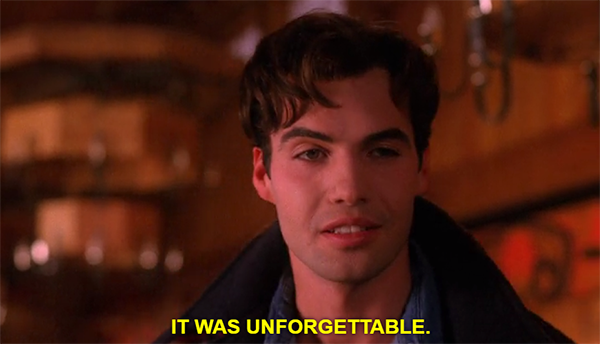 Hitting on Audrey by saying how cute and unforgettable she looked when she was 10. That’s not creepy at ALL! 😀

So along with Mr. Wheeler’s arrival in town, this is also the first episode for the little pine weasel. It’s the final episode for both Hank, James, and Josie. Hank goes back to jail for attempted murder and parole violations–and I want to say he dies there, but I’d need to reread The Secret History of Twin Peaks again. James departs for parts unknown to go find himself or whatever, and the bastard doesn’t have the decency to take Donna with him and get her out of our hair as well. And as for Josie…

With her about to be arrested for shooting Cooper and killing Creepy Rapey Asian Guy, her learning that Andrew is actually alive, and that Catherine is sending her to Eckhart, she’s ideally positioned for Catherine and Andrew are able to manipulate her and Eckhardt into a situation where she’ll wind up killing Eckhardt. It does work quite well. And then some weird stuff goes down.

I’m firmly in the fan camp that theorizes that Josie’s soul is trapped in the knob–or possibly the entire Great Northern building. All that fear and pain, somehow it let the Black Lodge folk get a little peek outside, and…then into the wood Josie’s soul goes, because…um… Well that’s how that works, right? 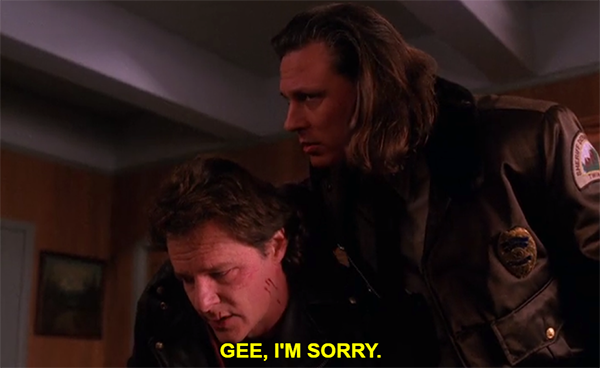 Okay, so in real life this would be police brutality. But this is Twin Peaks, and Hank is an asshole, so, um, I’m gonna allow this… 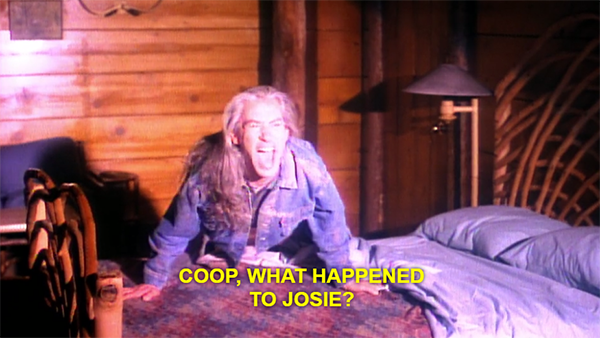 Yaaay! Back to the Black Lodge!

Weirdest Moment:
Well gosh, I think, oh, hmm… I think I’m gonna just half to go with the part where Josie gets trapped inside a drawer knob!! That doesn’t tend to happen on most TV shows. I mean, except that one episode of The Brady Bunch where Bobby murders that drifter.

Favorite Lines:
“I’ll talk to her. Maybe she’ll turn herself in.”
“…Maybe she’ll grow wings and join the circus.”

“The little pine weasel. Found only in our tri-county area, itis all but extinct.”
“They’re incredible roasted.”

“You’ll have to excuse me. The chef just tried to stab Jerry.” 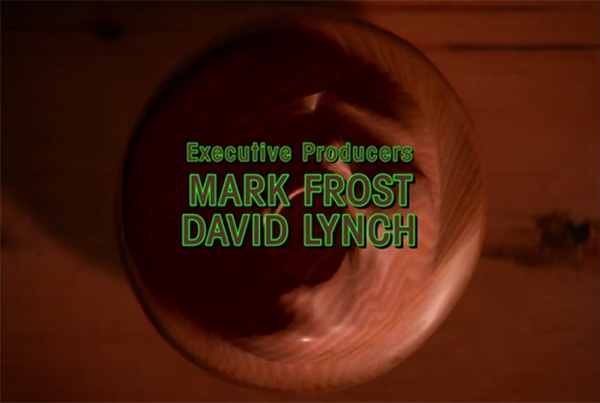 On to season 2, episode 17…
View all of my Twin Peaks re-watch blogs here!