And that’s all I have to say about that.

Gordon Cole’s back with a bit of news: Windom Earle was loaned out to the Air Force to help with Project Blue Book. Cooper is reinstated into the FBI. Speaking of Windom Earle, he continues to insinuate himself into Twin Peaks and the fringes of Cooper’s life, and also continues to try to combine chess and playing cards. BECAUSE HE IS A LUNATIC.

Also, Cooper combines Major Briggs’s tattoo with the Log Lady’s and makes a design that’s actually in a place called Owl Cave. “Harry, tonight you and I are going to do a little spelunking!” (Okay, that’s actually from a remarkably prescient SNL sketch.) 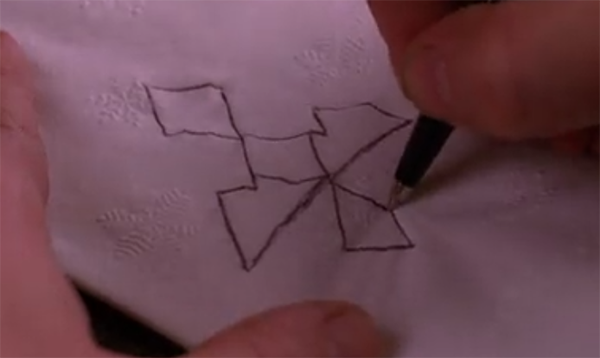 It looks more like he took two copies of the Major’s tattoo, broke the triangles apart to make diamonds, and THEN combined it with the Log Lady’s, but why be pedantic? 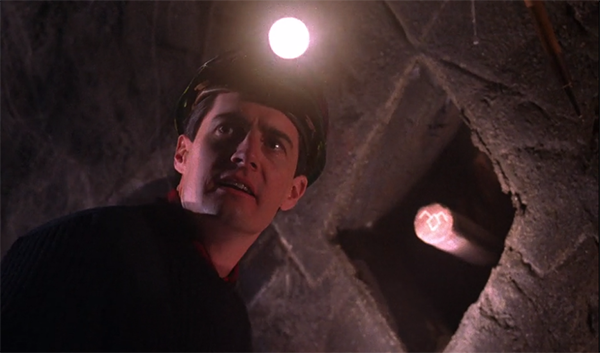 And, of course, the Owl Cave spelunking pays off when Andy whacks it with his pick and the cave wall, I dunno, gets aroused?

And, of course of course, Windom Earle comes along later, fondles the rod, and the whole thing just shakes and shimmies and falls to pieces.

Favorite Moments:
The offered hangover cures from Coop and Gordon to Harry. 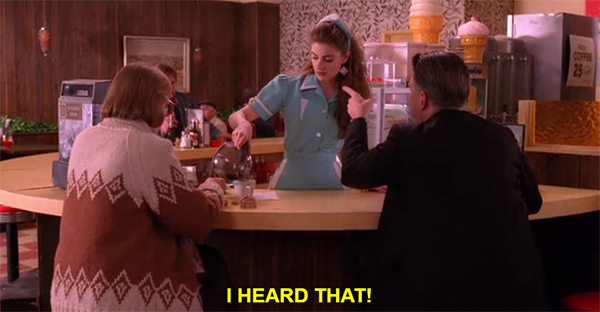 Least Favorite Moment:
Donna getting snippy with her dad because he’s not really up for telling her private details of her mom’s romantic past.
Teenagers.

Weirdest Moment:
Right at the beginning: Whatsherface having her own personal kinky-time with Harry before trying to strangle him. Girl’s got some strange hobbies.

Favorite Lines:
“She wants to speak to the South African Consulate.”
“…In Twin Peaks?”

“Why would Eckhardt want me dead?”
“Sexual jealousy.”
“Oh, yeah.”

“I want to thank you for helping out with the Weasel Riot yesterday, which is more than I can say for a certain DICK we both know.” 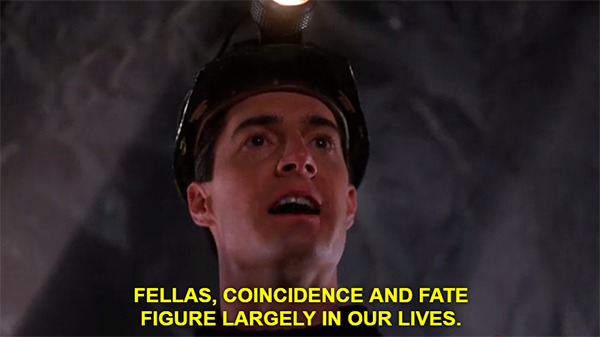 Mainly because this is very, very true.

Things I noticed for the first time: 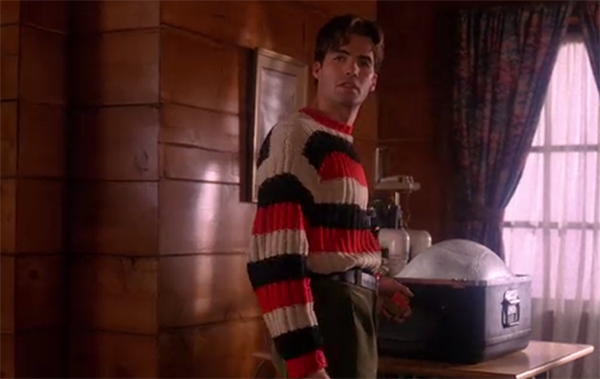 WHEELER’S SWEATER IS TUCKED INTO HIS PANTS! WHAT A DORK! 😀

How’s Annie: She’s fine. She’s weird, actually. She’s disoriented. She’s not sure where she is. I mean, she knows where she is but it feels odd being there. She’s okay. 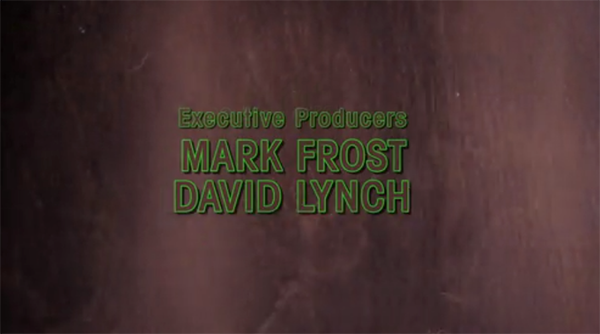 On to season 2, episode 19…
View all of my Twin Peaks re-watch blogs here!