I have a memory of this episode being watched, perhaps surprisingly, in the daylight. I’m not sure just how that happened, or even if it did. Honestly, I don’t have very many specific memories of any particular episode in season two, so these sections are likely to be a little thin for a while.

One thing I do remember is my first encounter with Creamed Corn Kid (aka the “grandson” of “Mrs. Tremond,” but he’ll always be Creamed Corn Kid to me). I had no idea what the hell was going on there, but I loved every moment of that scene just for sheer weirdness. I also hate creamed corn. Really who doesn’t?

One more thing: I didn’t remark on this in the previous episode, but Piper Laurie is out of the opening credits. That, not the fact that everyone thought Catherine died in the fire, made me really think Catherine was gone. Any other show where someone disappears in a fire without a body being found, I pretty much assume they’re still out there. But Lynch and Frost messed with all of us on a meta-level, and I most certainly fell for it.

Cooper and Albert share a working breakfast in front of a random barbershop quartet, because reasons. Not only do we learn that Cooper’s former partner went insane and then went missing (Windham Earle-sign!) but Cooper tells Albert about BOB. Albert is, understandably, a wee bit skeptical. 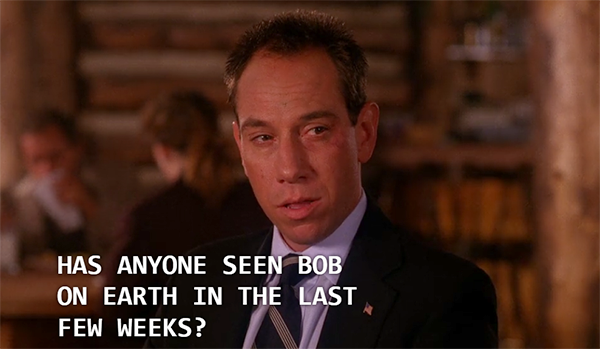 Meanwhile, at another table, it’s Mysterious Asian Guy! Why is he here?! Why does he look so ominous as he’s eating his breakfast??! What does he think of the barbershop quartet???! WE DO NOT KNOW! HE IS MYSTERIOUS!

It’s Mrs. Tremond and Creamed Corn Kid! (I still don’t know if Creamed Corn Kid is related to David Lynch–I should really check on that–but he sure as hell looks like it. I wouldn’t put it past Lynch to travel back in time, grab himself as a kid, and bring him to the future just to play this part! YOU CAN’T JUST SCREW AROUND WITH THE SPACE-TIME CONTINUUM LIKE THAT, LYNCH!!) 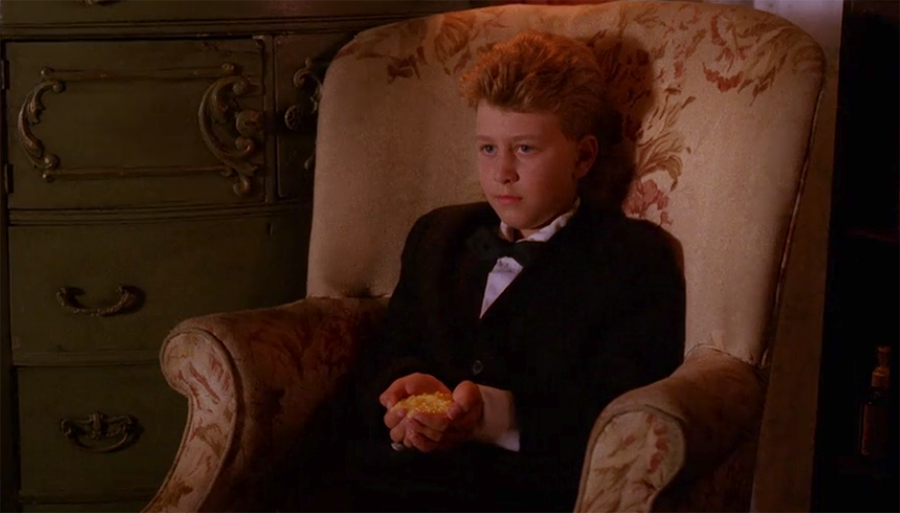 HE HAS POWER OVER CORN!

Now aside from the creepy fact that we later find out that that’s NOT Mrs. Tremond, there’s not all that much more that we do learn in the series about these two. But Fire Walk With Me makes it pretty apparent that they’re both from The Black Lodge. Is Mrs. Tremond/Chalfont similar to MIKE before he cut off the arm? Is Creamed Corn Kid a familiar like BOB? Are they here feeding off of Harold’s fear of going outside, or looking to steer Donna his way so that it will end in tragedy? The answer almost certainly is a highly definite “maybe.”

At the hopsital, Coop & Harry show Ronette a sketch of BOB, and she, understandably, freaks out. 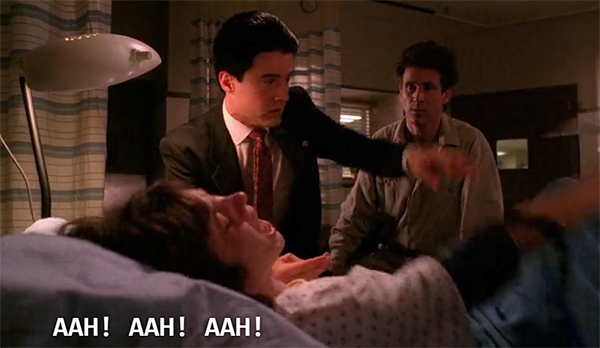 To quote Peter Venkman, “I’d call that a big yes.”

Meanwhile, Ben and Jerry discuss which sawmill ledger to burn while Jerry enjoys his smoked cheese pig. Honestly, I love that pig, mostly because it’s really fun to say “smoked cheese pig” out loud. This scene also features one of the quirkiest endings ever as Jerry gleefully reacts to the impending combination of marshmallows and fire: 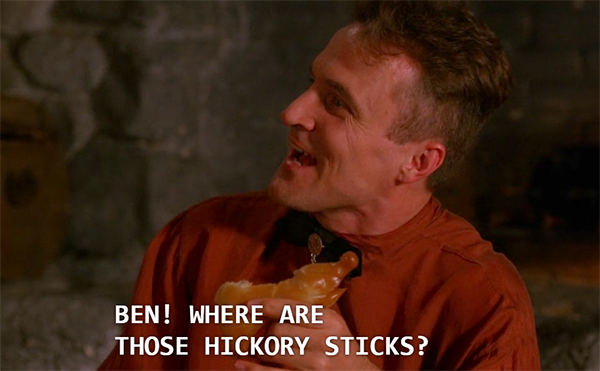 Do you ever get the feeling that if the Food Network existed back then, Jerry would be watching it each night with a bottle of lube?

Andy announces that he’s sterile, finally shedding the light on why he’s been upset with Lucy. But hey, he went all the way to Tacoma to donate sperm? That’s all the way across the state! (And Washington isn’t some tiny east coast state, we’ve got a lot of territory to cover!) Does Andy get the Washington State Sperm Bank Newsletter?

Speaking of Lucy, a little later she gets a call from an anonymous caller that she refuses to connect to the sheriff. “I’m sorry, I can’t connect you to Sheriff Truman unless you tell me who you are.” Lucy’s never been the brightest bulb in the deck, but this may be her most foolish moment. Who was that? What did they want to say? We never learn, so far as I know. Lynch wrote this episode. Did he just toss that in there to see if they could use it somewhere in the future?

Elsewhere, in a parked Lincoln Continental, Bobby talks Shelley into bringing the comatose Leo home (and keeping him out of jail) in order to collect on the insurance money. In other words, it’s Stupid Bobby Plan #3! And speaking of Leo, are you like me? Do you always expect him to move or twitch or moan something in this lingering, scene-ending shot? 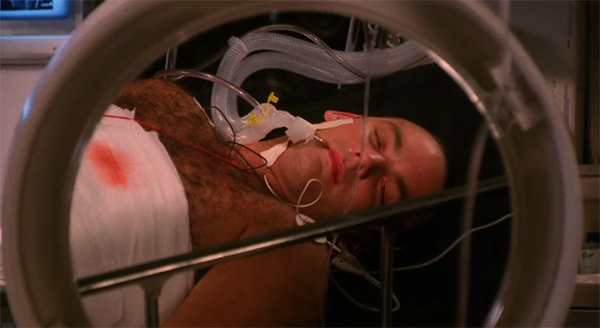 Some minor details from this episode: Hank used to be a Bookhouse Boy. Ronette sees a picture of Leo and says he wasn’t the one who hurt her. And Ben finally realizes his daughter is kinda, ya know, missing.

And speaking of Audrey, while being quite clever in her original infiltration of One-Eyed Jack’s, and quite competent in her interrogation of Emory Battis earlier in the episode, now isn’t smart enough to realize that hey, she should say immediately where she is when she’s calling Cooper and asking for his help. Especially since she gets captured by Blackie right after. 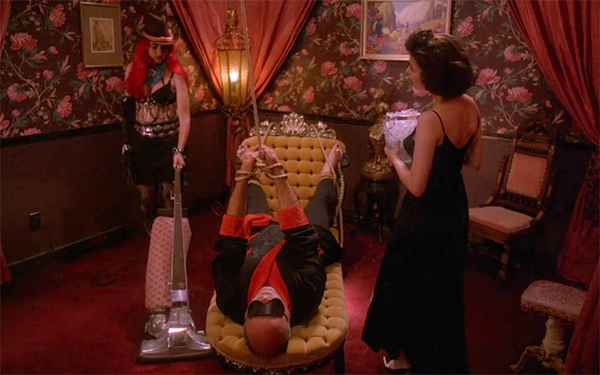 And speaking of Emory Battis, that little spineless gasbag has got some…unusual and oddly specific kinks.

I literally cried out “OH NO!!” when the James singing scene showed up. (I really thought it was later.) I mean, okay, it does a good job of showing-not-telling some good character stuff (Donna noticing James looking at Maddy instead of her, pushing her further off on her own). But…yeeesh. I have never talked to a single Twin Peaks fan that likes that little, ah, musical interlude. But hey, then BOB shows up to cleanse the palate in, frankly, just the most awesomely scary way. Thanks, BOB!

The BOB-a-thon continues into Cooper’s dreams as BOB does his “I’m too sexy” walk, with the major implication that BOB is an owl. Or an owl is BOB. Or the owls are spirits like BOB.

BOB’s too sexy for his jacket…

Favorite Moments:
Andy with the tape. 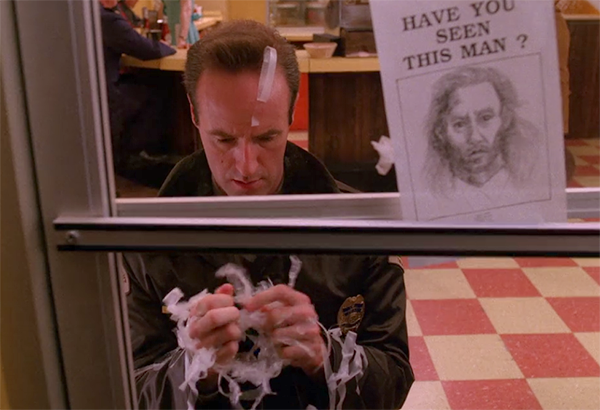 Nobody let him anywhere near the superglue.

Major Briggs, spurred on by the Log Lady’s log’s urging, delivering the message to Cooper of “The owls are not what they seem.” I pretty much just like when Major Briggs does anything, but this is especially a good one because he’s now on his trajectory towards the main plot line. You know, I wish so much that Don S. Davis was still with us and could be in the revival.

Least Favorite Moment:
Do you even have to ask? Look at it. LOOK AT IT!!

Weirdest Moment:
It’s a toss-up between BOB’s couch-crawl and Creamed Corn Kid’s “magic.” I suppose the creamed corn is more pure weirdness, so I guess I’ll go with that.

Favorite Lines:
“Agent Cooper, I am thrilled to pieces that the Dharma came to King Ho-Ho-Ho, I really am, but right now I’m trying hard to focus on the more immediate problems of our own century right here in Twin Peaks.”

“You wear shiny objects on your chest.”

“When the Tacoma Sperm Bank was looking for donors, naturally I applied. It’s my civic duty and I like whales.” Best. Andy line. Ever. (Though sometimes I do wonder how many people get the joke.)

“Any bureaucracy that functions in secret inevitably lends itself to corruption.”

“Well I’m Audrey Horne and I get what I want.”

Things I noticed for the first time:
I think I’m going to take this category out in the future unless I have something specific to mention. 🙂 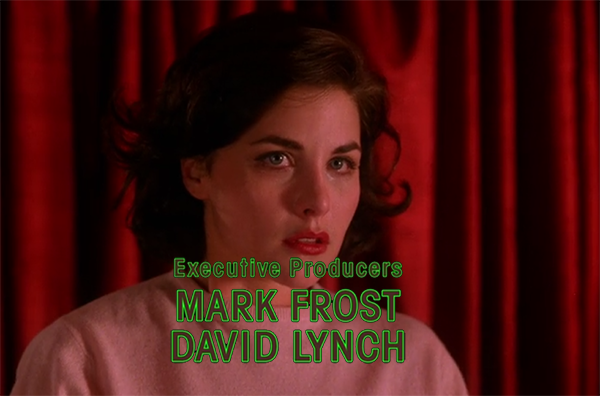 On to episode 3 of the second season…
View all of my Twin Peaks re-watch blogs here!