Again, memories on this one are a bit fuzzy, so instead I’m going to mention a bit about the episode titles on Netflix, which I haven’t listed on here. They weren’t originally attached to the episodes, nor were they written by any of the series writers. And with titles like, “Zen, or the Skill to Catch a Killer,” “On the Wings of Love,” and of course, “May the Giant Be with You,” it shows.

From what I’ve gathered–and by gathered, I mean from what I’ve heard from the first person who answered my question about this in a Twin Peaks Facebook group–the titles were thought up by someone in Germany when the series was aired in foreign markets. They were then re-translated back into English for use on the CBS website. And I do not like them, so I choose to mostly ignore them.

…Okay, so I do sort of like “Traces to Nowhere” for the second episode.

Cooper wakes chewin’ on an earplug. Does yoga, finds Audrey’s note under his bed. It comes with Audrey’s leitmotif. I wonder if they’ll keep that music for the revival?

Hawk had to drink 3 pots of chamomile tea to find out that the Palmers’ old summer home neighbors have no memory of a guy matching BOB’s description. Poor Hawk. Chamomile is disgusting.

Lucy is off to visit her sister Gwen in Tacoma, and immediately I know this ep has one of my favorite Andy moments coming up. Oh, hell, let’s just go jump to that right now:

Squiggy is installing things to help Leo live comfortably at home. This scene is a bit weird; given how they’re whispering to each other, it somehow seems like Bobby and Squiggy are in cahoots or something, though that doesn’t go anywhere.  And then Shelley and Bobby go off to play while Squiggy gets stuck in the machine. 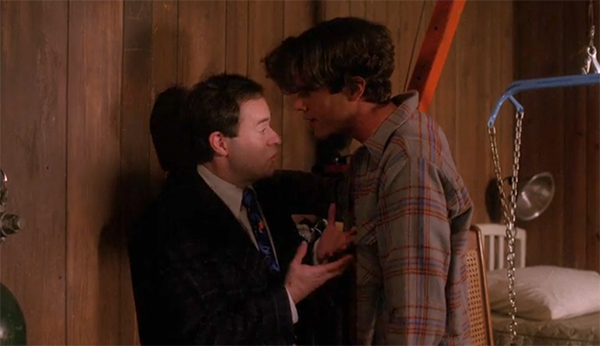 Okay, so the character’s name is Mr. Pinkel, but he’ll always be Squiggy to me.

At the Roadhouse Courthouse, Leland’s has a bail hearing, and gets released on his own recognizance. That sure comes back to bite them later, huh? Later comes Leo’s competency hearing, and everyone is wearing western bowties. The judge calls a conference to confer with Cooper and Harry over Black Yukon Sucker-Punches, mixed up by Sid, whose law clerk talents apparently also extend to tending bar. (Hey, is that a pun?) This has an interesting character moment I always liked: The judge and Harry drink, Cooper abstains. 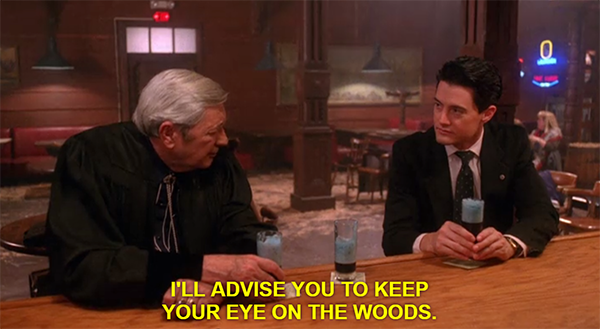 “The woods are wondrous here, but strange…”

Donna, her sweater perhaps strategically tight, makes a deal with Harold to share her stories with him if he lets her read Laura’s diary. Harold drinks a lot of wine, doesn’t he? Donna starts a little, then grabs the diary and tries to coax Harold outside. He takes one step out, starts shaking, glances into the sky, and collapses, still shaking, on the ground. Nice going, Donna. Now, Harold’s right arm also seems to be quivering a little more than the rest of him. Some people associate this with a similar phenomenon with a shaking right arm/hand near the end of the season when BOB comes out of the Black Lodge. I’ve always been a bit skeptical of this. I think it’s just that Harold’s arm is more noticeable in the shot because it’s right in front of the camera.

Nadine comes home. “Where are Mom and Dad?!” Oh, and then she pulls the door off the fridge. Because adrenaline.

“Mister Tajimura”–accompanied by the guy I pointed out checking into his hotel room back in the first season finale–sees Ben and makes a bid of $5 million on Ghostwood. You can see a bit of Catherine in the eyes and mouth, but it’s not such a bad disguise. Then Cooper shows up to be with Ben when he takes the call from Jean about the hostage/money exchange. 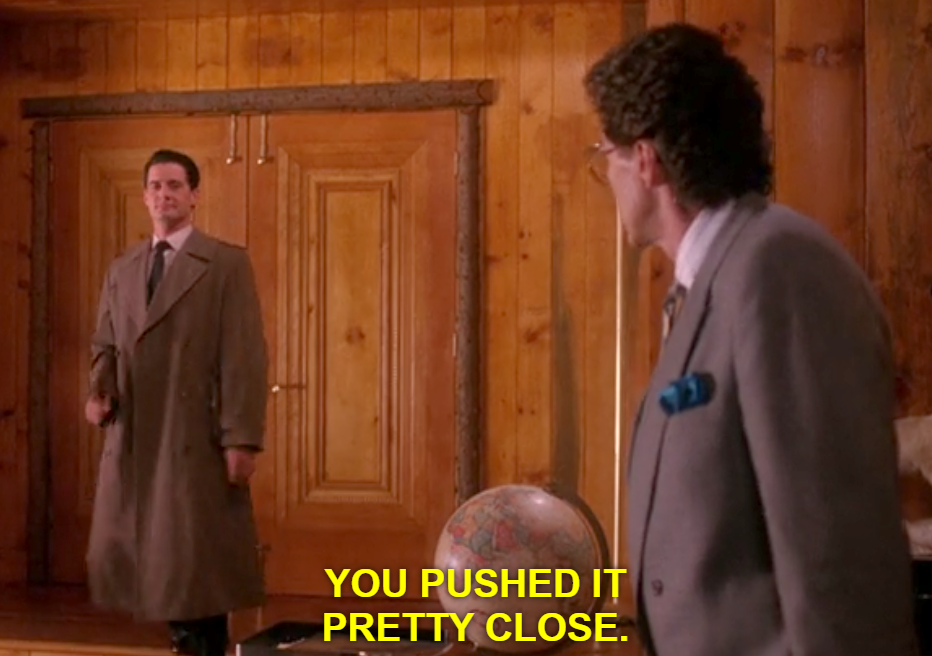 Look at that “Shut up, dumbass,” on Cooper’s face.

From here on, the episode flips between the two mirror plots of the rescue of Audrey, and Donna and Maddy’s attempt to get Laura’s diary for Harold. Let’s go with rescue first. Cooper spots an owl while Harry punches a One-Eyed Jack’s bouncer in the crotch, shoves a racquetball in his mouth, and then slaps some duct tape over it. (Harry comes prepared!) Inside they slip… 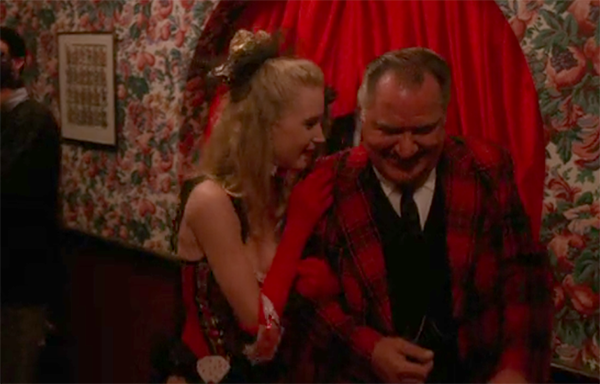 Cooper’s leaning over Audrey, spots Nancy in the mirror behind him approaching him with a knife, grabs the knife like a badass without even looking around, and then lays her out with a punch to the stomach. Jean kills Blackie so Nancy can take her place, witnessed by Harry, and then escapes. Cooper and Harry make their own escape with Audrey, but are stopped by this guy: 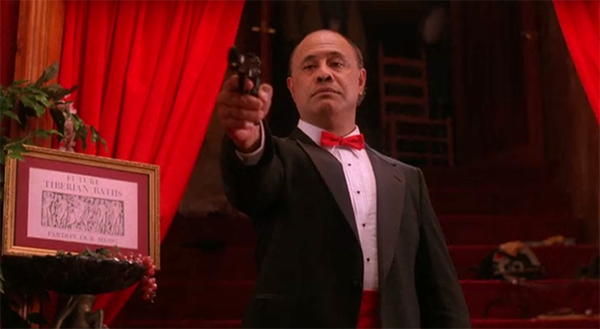 Looks kind of like the love-child of The Rock and Mads Mikkelsen, doesn’t he?

He’s got the drop on them, they’re about to be executed, and it’s Hawk to the rescue with a knife to the back! Because Hawk is awesome. I mean, okay, it’s not a moment that’s too hard to see coming, but I like it anyway. Outside, Jean catches Hank outside reporting to Ben, and we won’t be seeing Hank for a wee while.

Meanwhile, it’s daring plan #2: The teenage version! That night, Donna tells Harold a story about a night when she was 14 and she and Laura met some 20 year old guys at the Roadhouse, went skinny dipping and made out. And about midway through the story, Harold stops writing and just listens. 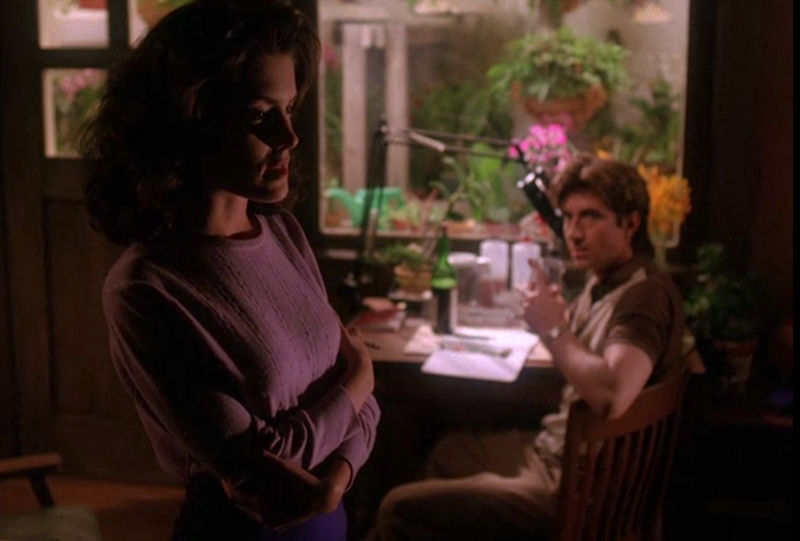 Unfortunately, Maddy rolls a 1 on her stealth check and makes a lot of noise in Harold’s living room going for Laura’s diary. Harold is understandably upset about this intrusion. “Are you looking for SECRETS? … Do you know what the ultimate secret is? Do you want to know? Laura did…” 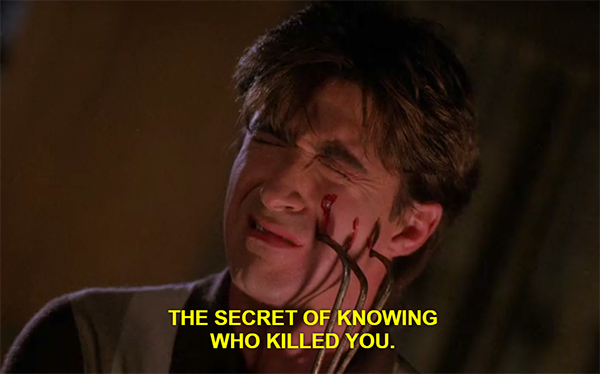 And okay, so now maybe he’s gone a teeeeensy bit beyond “understandably upset.”

The episode ends there, but clever viewers who’ve noticed the similarities between Coop & Harry’s operation and Donna & Maddy’s may guess that, like Hawk rescuing Coop & Harry at the last minute, someone may just be coming to rescue Donna & Maddy.

Weirdest Moment:
Um, I’m gonna go with all of the scenes where someone drags a gardening claw across their own face.

Favorite Lines:
“You can see from these EEGs, this chart here which is actually of my own head is intended to show normal brain activity.”
“Objection to the use of the word ‘normal,’ your honor!”
“Well he’s close enough!”

Things I noticed for the first time:
This isn’t so much noticing as wondering for the first time: Did Donna make up the story she told Harold in order to distract him? Donna, especially 14-year-old Donna, somehow doesn’t seem the type to be comfortable swimming naked with 20-year-olds. But I could see it go either way. 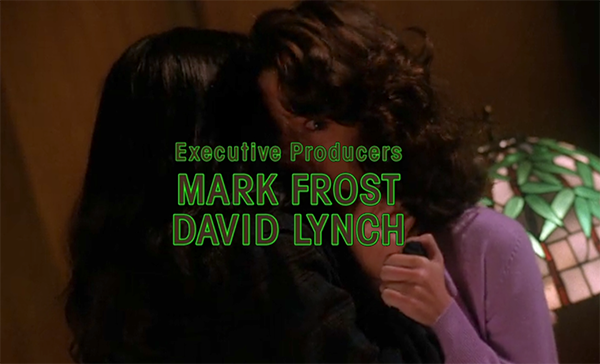 On to episode 6 of season 2…
View all of my Twin Peaks re-watch blogs here!