My memory of this episode comes not from my original viewing, but one or two viewings later. Among the couple of people to whom I was showing the series to at the time was one woman who loved musicals, and absolutely loved Oklahoma. (The musical, not the state. Though maybe she loved the state as well. I never thought to ask.) She got very miffed at me for showing her something that forever sullied the song, “Surrey with the Fringe on Top.”

I have no regrets. 😀

Hey, Piper Laurie is back in the credits!

Leland and BOB:
The fun thing about this episode is that, now that Leland’s been outted to the viewers as BOB, the show takes advantage of this for as many creepy moments as possible. This begins with Donna & James visiting the Palmer’s house to say goodbye to Maddy and finding from Leland that she’s, ah, “already left” while her body is actually stuffed into the hall closet. 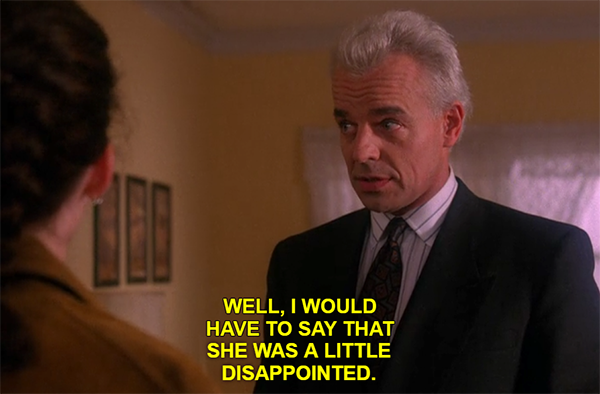 That’s maybe kind of an understatement.

Later, we’ve got Leland/BOB dancing at the Great Northern doing his best Fred Astaire impression. Harry and Coop come across him and break the news that they’ve arrested Ben Horne for Laura’s murder. He does a pretty good job of making his shock come off sincere. And Ray Wise does an excellent job of being even more creepy a moment later. 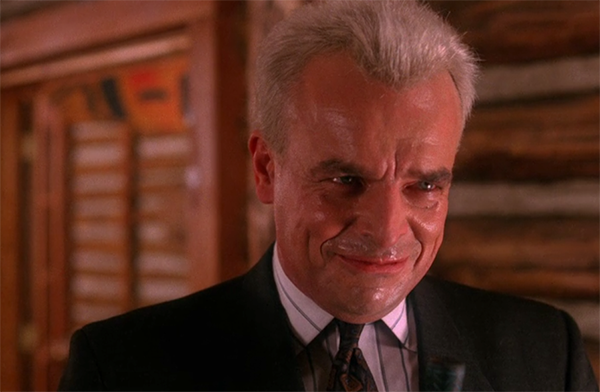 The performance loses something in freeze-frame, but still.

But most wonderful–for me at least–is Leland’s traffic stop. With Maddy’s body in the trunk, and BOB showing up in the rear view mirror, the tension is high, and Cooper & Harry don’t suspect a thing. Leland wants to show Cooper his golf clubs while Maddy is still in the bag?? It’s such a gleefully taunting moment for BOB, it creeps me out, and it’s fantastic. 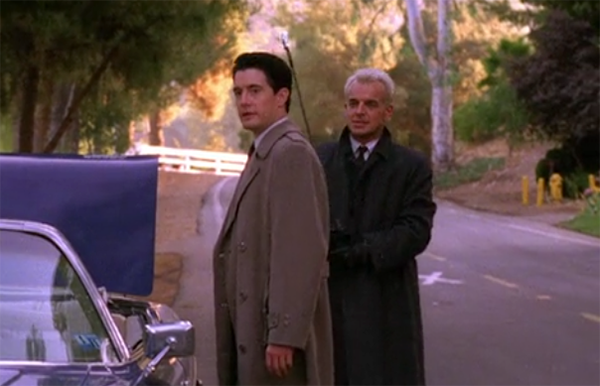 I love how Leland snaps back to non-threatening as soon as Cooper turns around.

Andy, Gwen, and Lucy:
Meanwhile, Lucy’s back, and she brought her sister Gwen and Gwen’s new son. Gwen is a character that I know would get on my nerves if she stuck around for longer than she does, but as it is, we get just the right amount of her. All of us know someone like Gwen, don’t we? Assuming, self-absorbed, socially oblivious… Wow, you can just imagine what Gwen’s Facebook page would be like, can’t you? 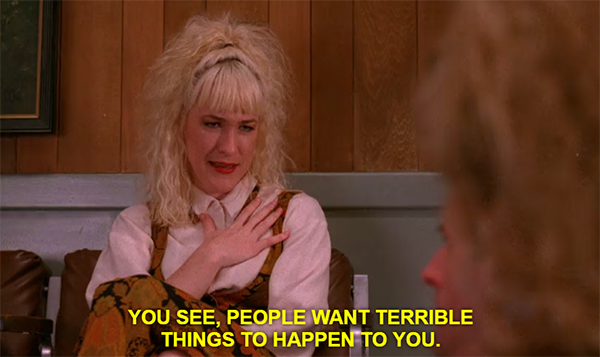 Andy later sees Lucy holding her nephew and faints, thinking (I assume) that Lucy already had her baby. I can’t fault Andy TOO much for this. I mean, they DO live in Twin Peaks, where weird things do happen. Gwen’s subsequent nosey commentary on Lucy and Andy’s ensuing conversation about his sperm test results is just so awkward and hilarious.

Ben Horne:
And speaking of goings on at the police station, Ben’s having a rough time of things. Jerry comes back into town and goes to the jail cells to consult with Ben about his arrest for Laura’s murder. The cell’s bunk beds side-track them into a weird little amusing scene as they reminisce about their bunk beds as kids, with “Louise Dombrowski dancing on the hook rug with a flashlight.” 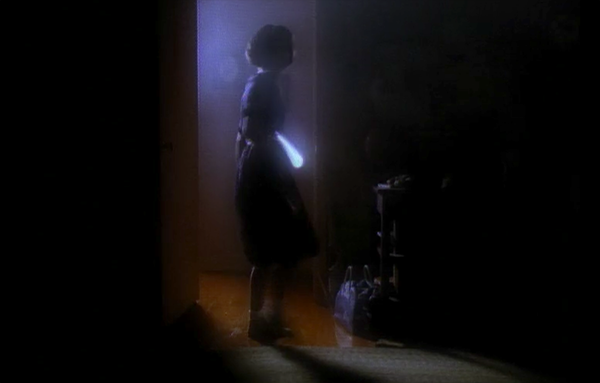 This goes on for over a minute.

In what may be the only scene with Cooper and Jerry Horne, Cooper does a wonderful job of verbally swatting Jerry away like a little fly.

“Jeremy Horne. Gonzaga University, 1974. Graduated last in his class of 142. Passed the bar on the third attempt. License to practice law revoked in Illinois, Florida, Alaska, and Massachusetts.”

Jerry’s advice to Ben after is even more amusing:

“As your attorney, your friend, and your brother, I strongly suggest that you get yourself a better lawyer.”

The one armed man gets brought in to give Ben the sniff test for BOB-possession. MIKE finds no BOB, but says he has been near. Harry decides to charge Ben with Laura’s murder anyway. In what may be one of the most logical, level-headed investigative moments of the TPPD, Cooper wants Harry to let Ben go, but Harry is more persuaded by, ya know, evidence and such. 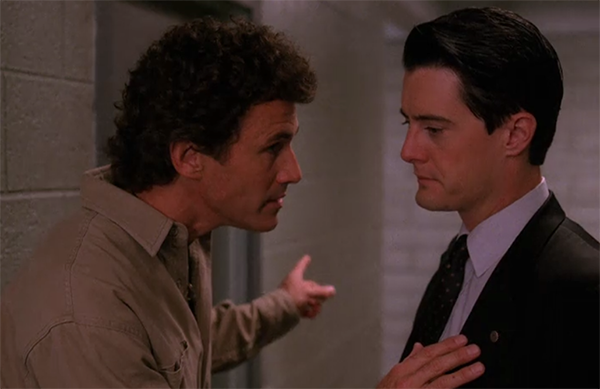 Incidentally, after the one armed man clocks his police guard at The Great Northern, he’s later found “near the waterfall.” Is there some mystical significance to the waterfall? They often show close-ups of it when supernatural things are afoot or the Lodges are mentioned.

But back to Ben’s tale. As the cherry on top of the crap-flavored ice cream sundae that is his day, Ben gets a visit from Pete who has a taped message from Catherine. She’s still alive, she played him, and she can give him an alibi for the murder. Pete’s utter, vindictive delight at taunting Ben with Catherine’s taped message is just, well, delightful. Those two have a very unconventional relationship, don’t they? 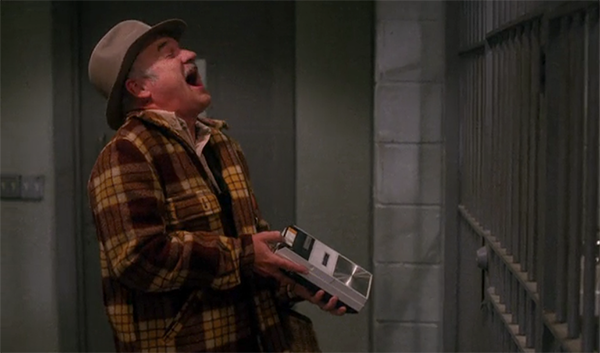 Meanwhile, Bobby plays the tape from Leo’s boot and hears Ben hiring Leo to burn the sawmill. Credit where credit is due: Bobby is smart enough to recognize Ben Horne’s voice. When has dealt with Ben before?

Norma, Hank, and Vivian:
Norma’s mom Vivian arrives, and even when I was watching the very first time, I guessed that she was M.T. Wentz in about 10 seconds after she shows up because of the way she asks about and tastes Toad’s mashed potatoes. (And “tasting Toad’s potatoes” sounds a lot dirtier than it is.) Vivian has also got a new husband, Leisure Suit Larry! 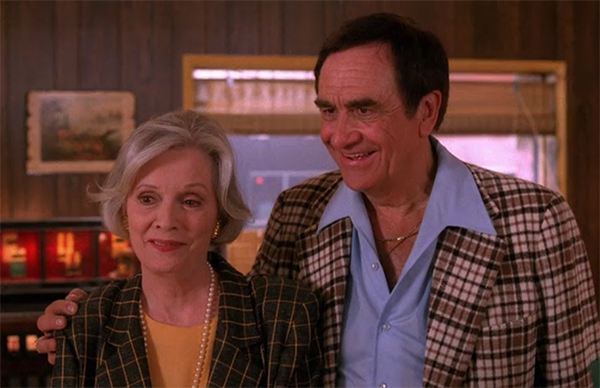 Okay, so his name is Ernie, but…

Speaking of arriving, Hank shows up a bit later after being gone for a 48 hours. Norma is upset, but Hank spews his false contrition and feigns a humbled desire to make up for his past, and she soon buys it. Or at least she softens a little. Every time Hank does that shtick, it makes me want to punch him in the eye with a tuning fork.

All four of them go out to dinner, where it’s revealed that Hank and Ernie have a history. What are the odds that Hank’s former cell mate winds up marrying his wife’s mother? I don’t think it’s anything but a coincidence; that seems to be how the show plays it. But it’s a bit of a stretch for me. On the other hand, that didn’t even occur to me until I’d seen the series a few times, so I guess it’s not too bad. Or maybe I’m just slow.

That night, Maddy’s body is found, wrapped in plastic. (No word if there was any sort of shipping label on the plastic directing her body to Missoula, Montana…)

Favorite Moments:
Everything with Leland/BOB, but especially the moment where it looks like he’s about to attack Cooper with a golf club. Harry was just up the road. Would Leland really have gone through with it?

Andy’s “Shut UP.” to Gwen, with Lucy backing him up, and Gwen’s reaction. 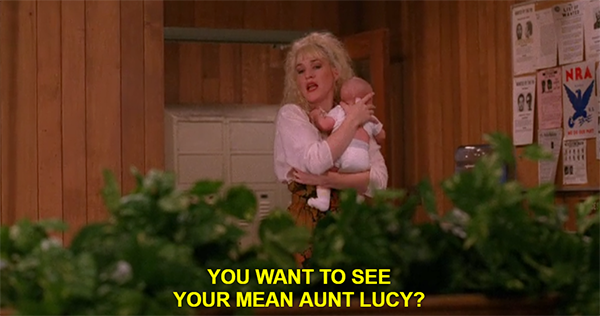 Weirdest Moment:
Louise Dombrowski dancing on the hook rug with a flashlight.

Favorite Lines:
Jerry’s line to Ben about getting himself a better lawyer (above).

“In another time, another culture, he may have been a seer, a shaman priest. In our world he’s a shoe salesman and lives among the shadows.”

“Lord, what’s become of us?”
That line was probably meant to be corny, but I can’t help but find it a bit poignant each time I see it.

Things I noticed for the first time:
Nothing this time around. 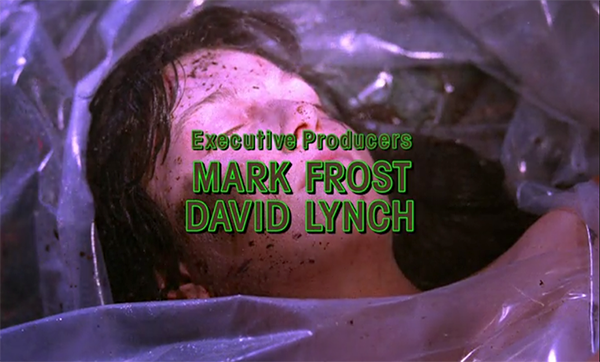 On to season 2, episode 9…
View all of my Twin Peaks re-watch blogs here!