Honestly, the only thing I really remember about my first time watching this episode was that I was really sorry to see a certain character go. I don’t want to name that character here, as the first few lines of these posts can show up in previews on Facebook and Twitter and such, so I don’t want to inadvertently spoil anyone. It’s the character who gets a head wound, and gets to hear the Tibetan Book of the Dead.

“I don’t know where this is headed, but the only one with the coordinates for this destination in his hardware is you. Go on whatever vision quest you require. Stand on the rim of the volcano, stand alone and do your dance. Just find this beast before he takes another bite.”

Thus begins Leland Palmer’s last episode alive. But before I talk about all of that, let’s touch on the peripheral plots and scenes in this ep:

Donna’s apparently over her bout of sadness from the Roadhouse, and now she and James are in love and happy again. James even gives her a ring and, I think, kind of proposes?

“I just think we should be together all the time. If that’s okay with you.”

This doesn’t last long, of course. Later, after Donna figures out that Maddy’s dead, James pulls a massive dick move by making it all about himself and utterly abandoning Donna on the side of the road. I mean, okay James, I get it: You’ve lost two people you really cared about, and you’re young and kind of a dope, but I hope you look back at that moment for the rest of your life and are ashamed of your behavior. James leaves town, never to return to Twin Peaks again. Or at least, not until the revival, I guess. I’m curious to see how he’s matured.

Also, Catherine comes dressed as Tojamura to taunt Ben with her survival and cleverness. She blackmails him into signing the contracts in exchange for an alibi, and then says that, well, she’ll consider telling the police. Aww, Ben. I ain’t got no sympathy for thee. Watching Ben first recognize Catherine behind the disguise is fun to watch. He’s amazed, he’s relieved, he’s honestly happy–though in a self-serving sort of way, of course. It’s a fun scene to watch, especially when, after Ben signs, she says she’ll consider telling the sheriff.

“Why Ben, we’ve spent our entire adult lives lying to each other. Why spoil it with the truth now?”

There’s only a little bit at the diner this episode, half of which is a scene that starts with Vivian spitting out Norma’s eggs, as if we needed more evidence that she’s a food critic, or as if I even needed more of this story line at all. The problem is just that Vivian isn’t an interesting character, and, much as I like Norma’s presence in the show, she’s one of the most bland people in town. Watching her and Vivian work through what feels like a boilerplate “parent never shows approval of hard-working child” plot just falls flat.

The other half of the diner scene is more important because it leads us into the rest of the primary story, and all because Andy is sitting at the counter repeating Harold Smith’s last words to himself, because he is Andy. Donna overhears, and goes to Cooper to tell him about Mrs. Tremond and Creamed Corn Kid, who said the same thing. Except when they go to check it out, Mrs. Tremond isn’t there! Nor is Creamed Corn Kid! Well, okay, so there is a Mrs. Tremond: 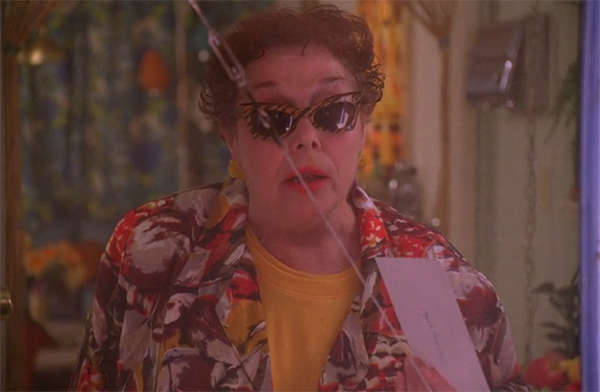 But that certainly isn’t the one we met. She found a letter in her mailbox for Donna the morning after Harold died, which she “meant to turn in.” Suure you did, lady.

The letter turns out to be a page from Laura’s diary describing the exact scene in the Red Room that Cooper dreamed about where Laura whispers BOB’s identity in his ear. (Three possibilities here I can’t decide on: Harold mailed it, the Giant somehow mailed it, or some of the non-BOB denizens of the Black Lodge mailed it, seeking to help Cooper get BOB under control. I have a theory, mostly based on FWWM, that since Mike went good, BOB’s been running around unchecked, and other BLers like Tremond and Creamed Corn Kid don’t like it.) Cooper tells Donna that he dreamed what Laura described, to which Andy helpfully replies, “That’s impossible!” Cooper answers, “Yes it is,” which really isn’t nice to do to Andy’s brain. 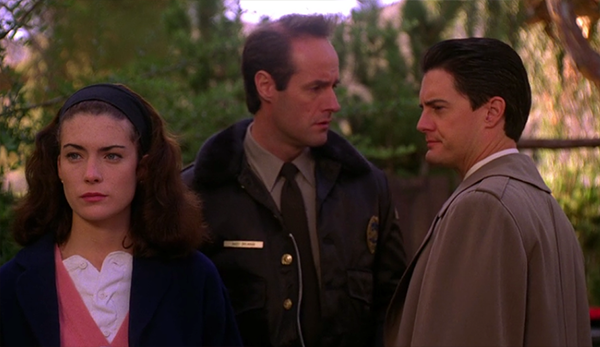 Now I’m not going to go into a whole lot of detail of the investigation leading up to the meeting at the Roadhouse (i.e. Cooper talking to Mike, a lot of circumstantial evidence in Ben’s office, etc.). I’m running out of time to get this re-watch done before the premiere on May 21st and I’ve already written a lot here. But I do want to give mention to this whole scene at the Palmer household…

Donna stops by, wearing Laura’s old glasses no less, to drop off a tape of that horrible, horrible song they recorded with James so that Leland can mail it to her. 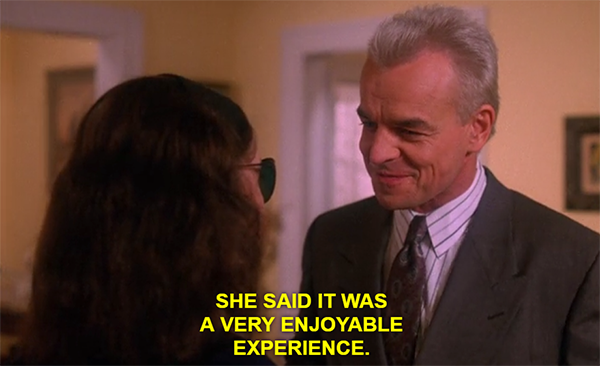 Well that’s gotta be a lie.

Leland recognizes Laura’s glasses, or rather BOB recognizes the glasses, and you can tell that he’s just considering going for, what the heck, another Laura-murder roleplay. The music grows ominous. Maddy’s mom calls to say she hasn’t made it home. BOB appears in the mirror again, and all of this slowly rising tension culminates in what’s possibly the most frightening GLASS OF LEMONADE OF ALL TIME!! 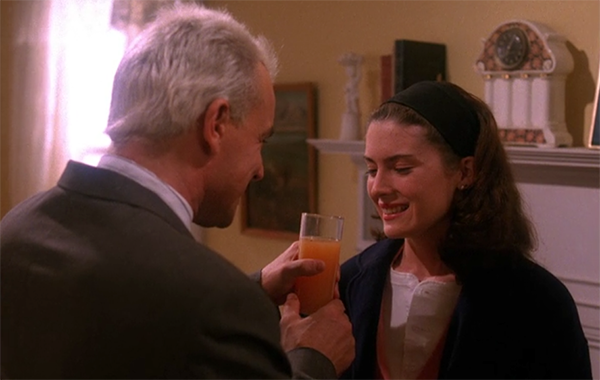 Leland breaks out the music, BOB/Leland turns to dance with Donna, they slowly move around the living room as almost everyone at home is yelling at her to get the hell out of there, he grabs her with a sudden embrace that’s really far too much for your friend’s dad to do, and thank the doorbell rings. 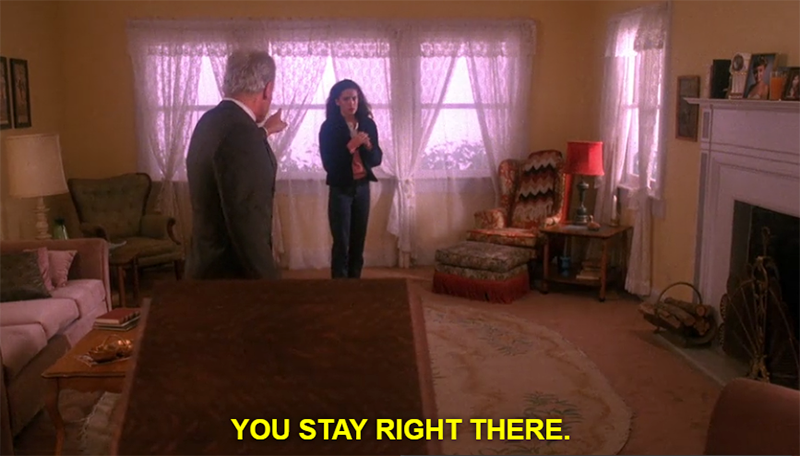 Well fuck THAT! Fortunately for Donna, it’s the sheriff: There’s been another murder, and he needs Leland to come with him to help them.

And then, it’s on to the Roadhouse. Let’s take a look at that in some un-commented images, shall we? 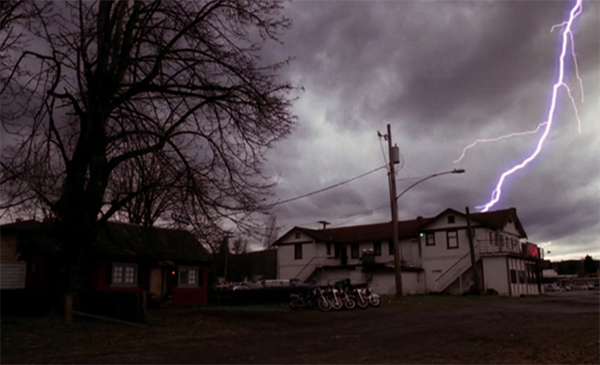 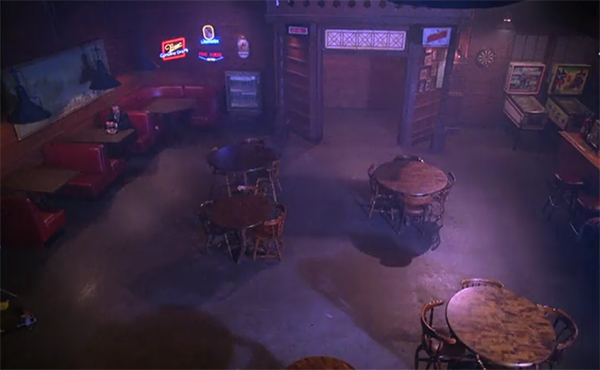 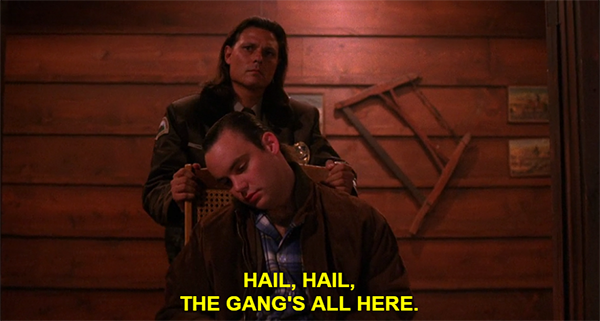 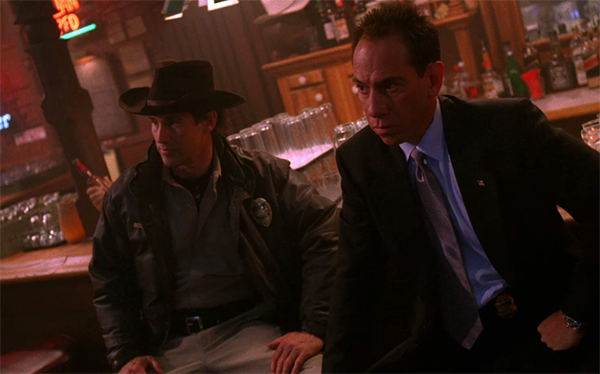 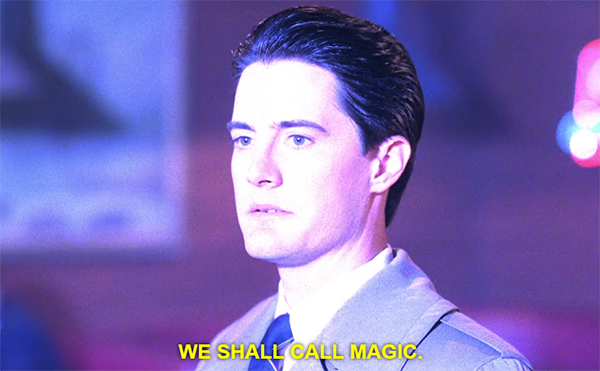 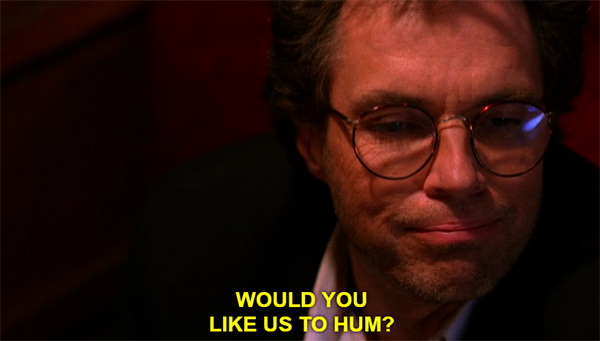 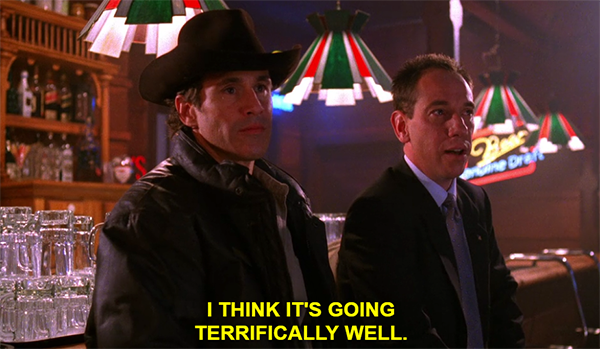 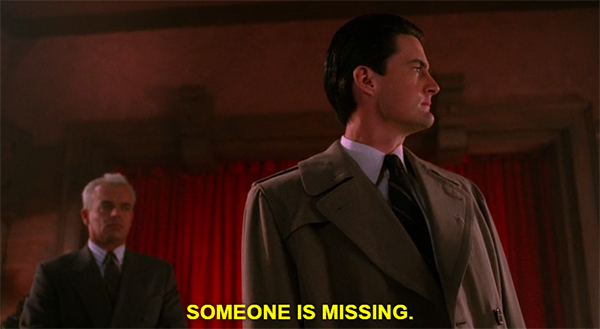 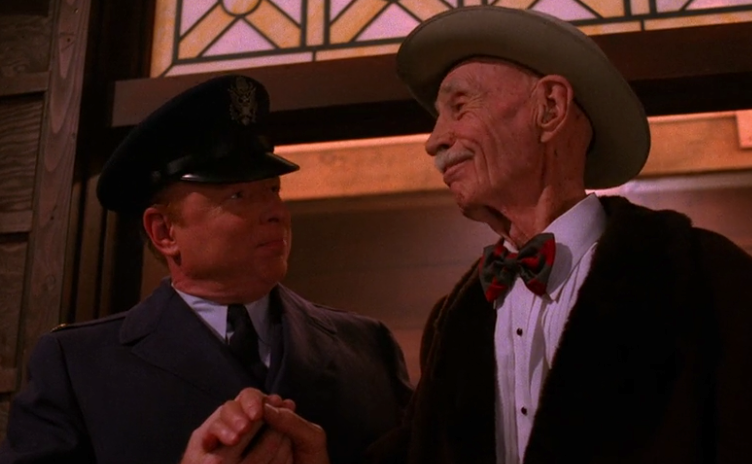 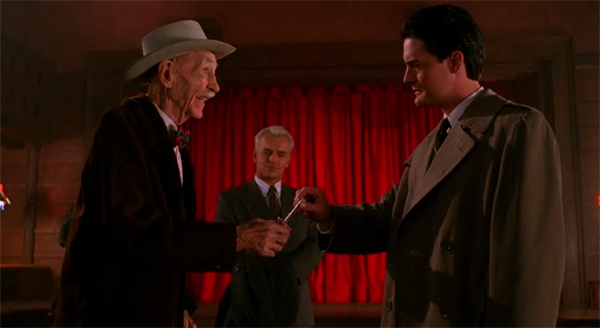 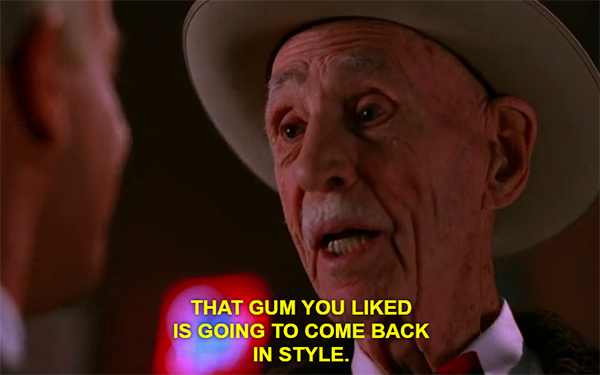 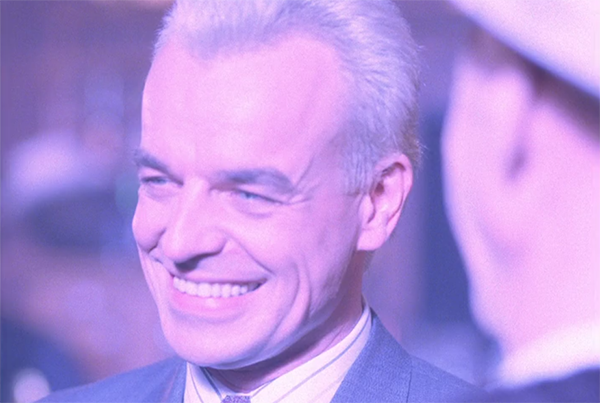 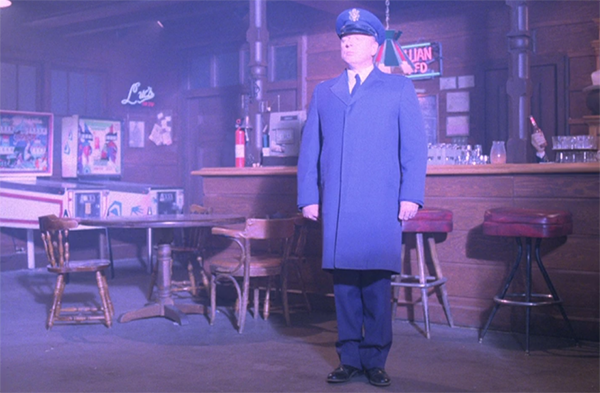 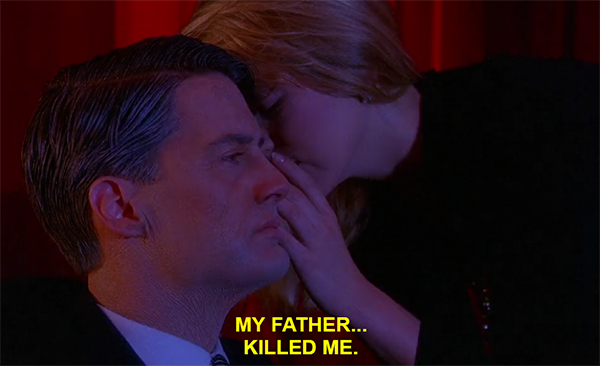 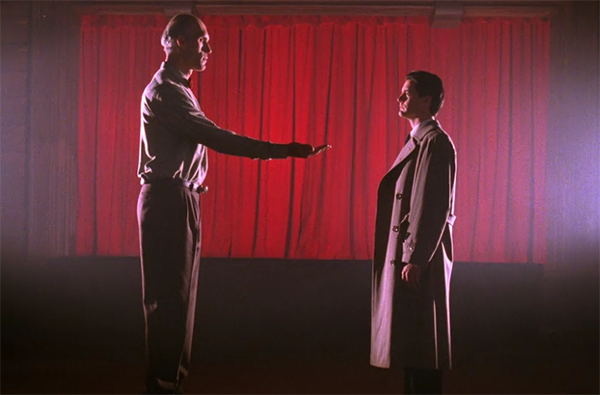 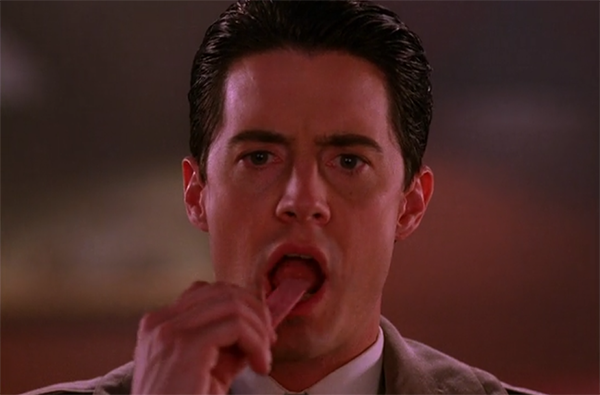 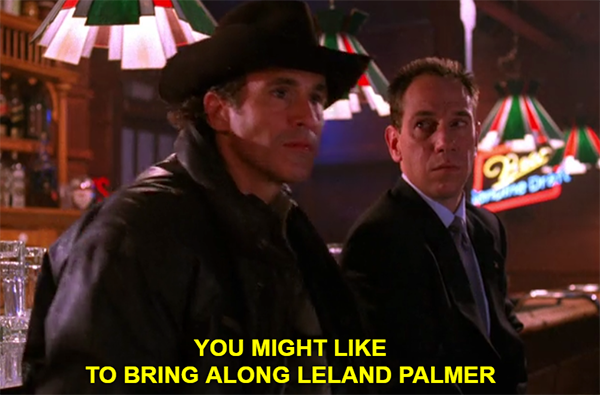 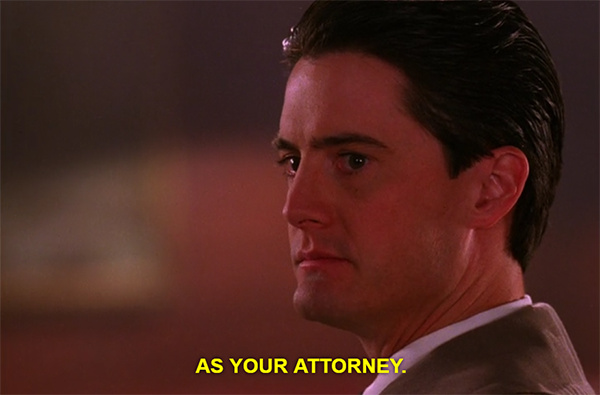 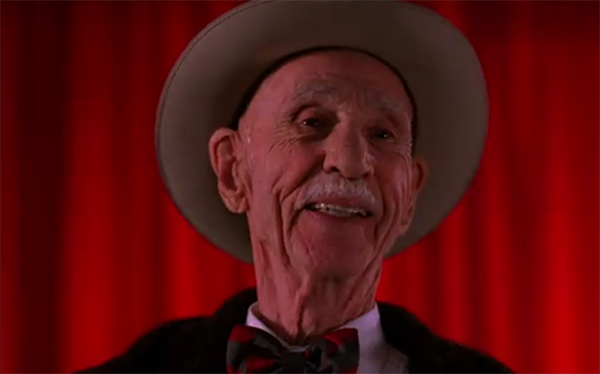 And soon comes what’s possibly Ray Wise’s best performance in the entire series as he switches from an enraged and gloating BOB, and a horrified, dying father traumatized by the sudden memory of all that BOB has made him do. 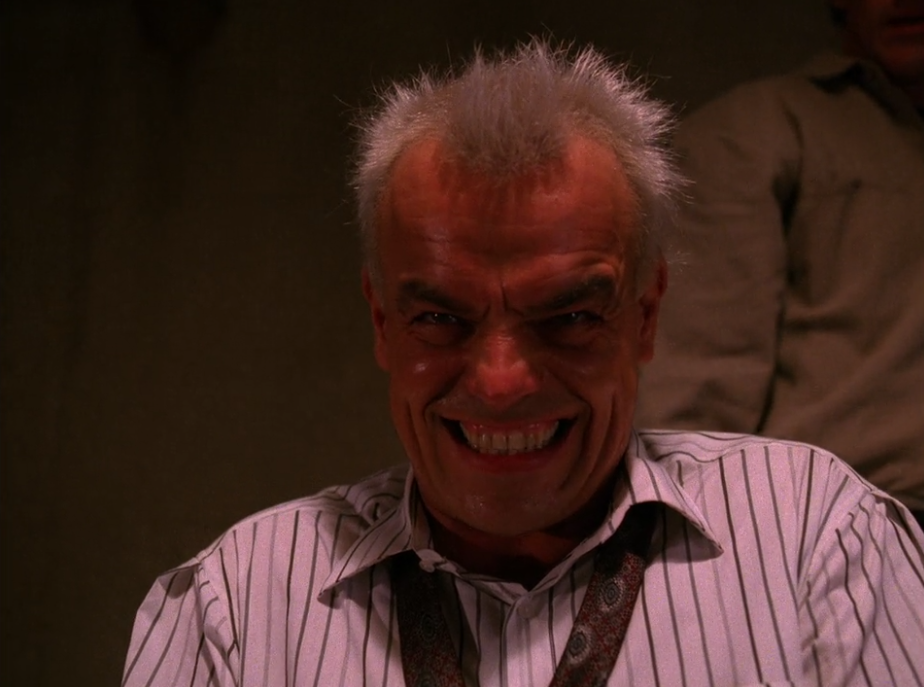 If Ray Wise replaces the late Frank Silva as the embodiment of BOB in the new series (I don’t know that he is, that’s just my own theory), he’s gonna do just fine.

One of the things we learn from Leland remembering is that an unspecified “they” wanted Laura, and others, to possess and use like they used Leland. This is, I think, the first time that it’s implied that there are others out there. That detail completely skipped past me in my first viewing. I wonder, if Dick hadn’t smoked and set the sprinklers off, would BOB have been able to escape? It’s highly implied he somehow escaped (electrically?) through the water. What would they have done if they’d somehow been able to hold BOB? Or would they? 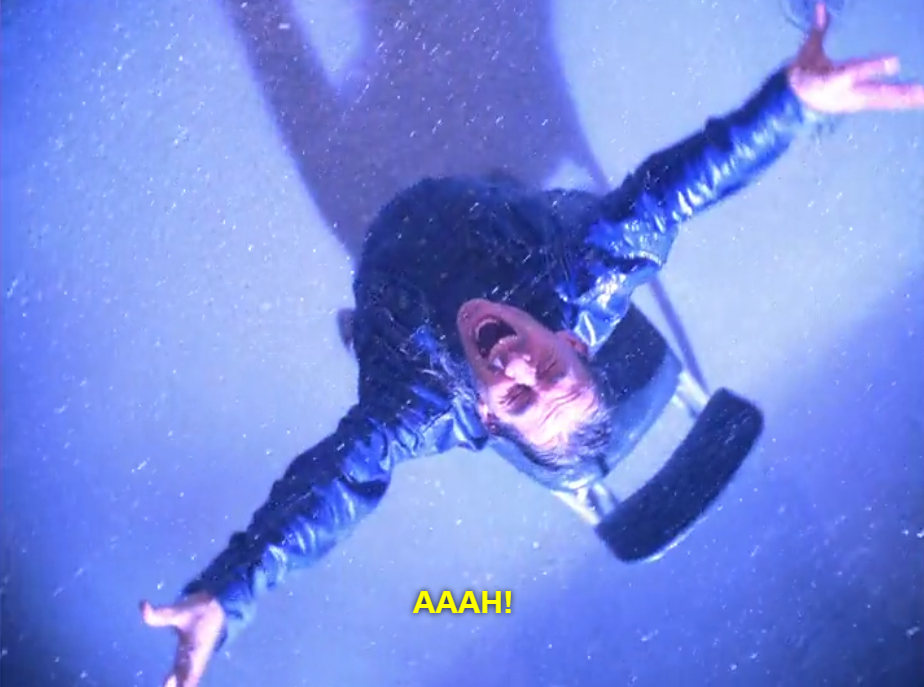 Eat your heart out, Shawshank Redemption.

After Coop, Harry, and Albert walk on a path outside the station, and standing in their path ahead is Major Briggs, symbolic of his coming larger part in the overall plot. It’s interesting, don’t you think, that the Major seems to know what’s happened already, and what they’re all talking about? And no one questions it. 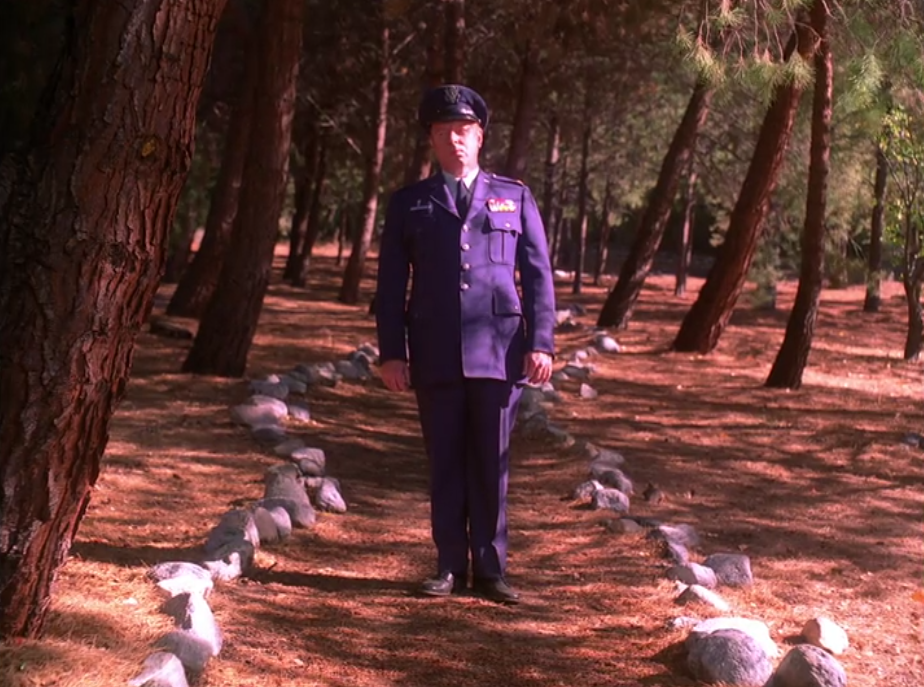 I love that shot.

The ensuing discussion on the path as to whether BOB really exists or if Leland was just crazy works on two levels. Aside from being debated among the characters themselves, it also invites the reader to consider this question as well, allowing them to form at least two interpretations of events so far. One could even make their own personal canon where the series ends at this moment, viewing BOB in a metaphorical fashion and the overall story one of the horrors of child molestation and domestic abuse. Which is more horrifying, that dark evil entities like BOB exist, or that a man could rape and murder his own daughter?

Favorite Moments:
Donna Hayward and the Lemonade of Doom. The entire Roadhouse scene. Mayor Briggs on the path. The BOB-vision sequence with the owl at the end.

Weirdest Moment:
The owl at the end. 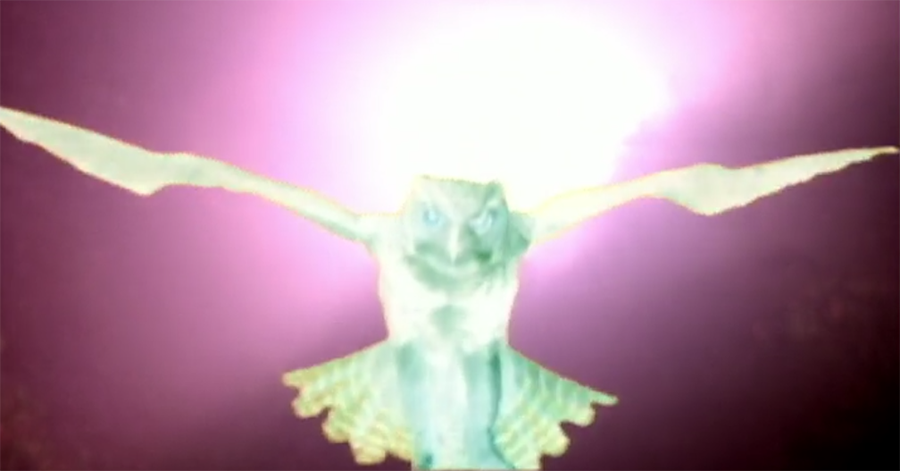 Favorite Lines:
“Dick Tremaine? It’s Brennan. Andy Brennan. We need to talk! …That is, if you’re not too busy.”

“Gentlemen, there is more of Heaven and Earth than is dreamt of in our philosophy.” 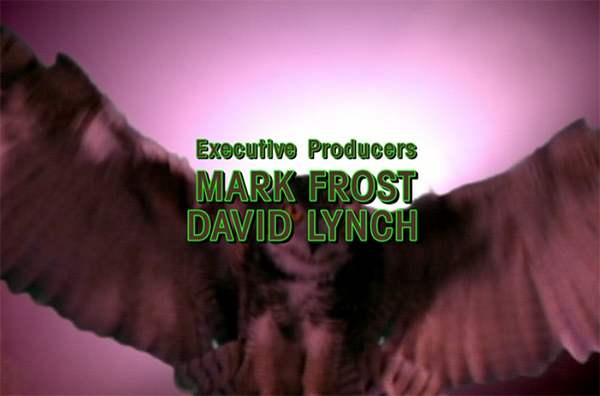 On to season 2, episode 10…
View all of my Twin Peaks re-watch blogs here!