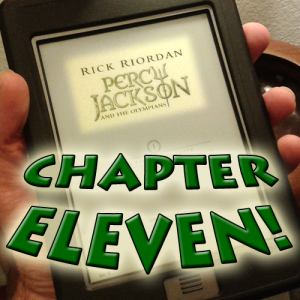 “Snakes. Why did it have to be snakes?”

We Visit the Garden Gnome Emporium

I need to start by saying that the opening paragraph of this chapter is just downright charming. I was reminded a little of David Sedaris with the way it waltzes through the details, beginning the chapter via in a little narrative dance with just the right measure of snark. (Okay, so it’s admittedly been a while since I’ve read anything by Sedaris, so I could be way, way off here, but that’s the connection my brain made.) In fact, I’m going to bump the “favorite line” portion of this post to the front so I can quote the whole thing:

In a way, it’s nice to know there are Greek gods out there, because you have somebody to blame when things go wrong. For instance, when you’re walking away from a bus that’s just been attacked by monster hags and blown up by lightning, and it’s raining on top of everything else, most people might think that’s just really bad luck; when you’re a half-blood, you understand that some divine force really is trying to mess up your day.

So if the Furies last chapter weren’t enough, immediately afterward Percy gets to stumble onto Medusa and her fantastical statuary emporium. I’m curious if this is just a massive stroke of bad luck on Percy’s part (seriously, what are the odds of wandering straight into Medusa’s lair after a bus wreck?), or if the gods somehow managed to direct him there. I confess I got rather annoyed at Percy for ignoring Annabeth’s warnings that something was up until I clued into the fact that Medusa was having an effect on his mind.

I’m not sure if that says I’m slow, or just that I find it believable that Percy is foolish enough to act that way without any outside influence. I’ll give him the benefit of the doubt and just call myself slow. But if I’m slow, then I’m going to call Medusa slow as well: How many thousands of years old and she blows her cover by calling the kids by name? Rookie mistake, “Auntie Em.” You’re better than that. You got cocky, and then you lost your head!

Speaking of slow, coming up with cover stories really is not Percy’s strong suit, is it? Lost orphans who got separated from their circus caravan, eh? I’m not sure even Elmer Fudd would fall for that one. 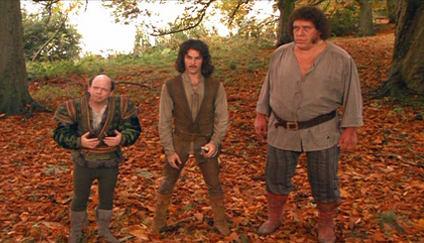 Though to be fair, I suppose the “lost circus performers” story isn’t always doomed to failure.

So do you suppose Annabeth’s insistence that Athena cursing Medusa is Poseidon’s fault is some sort of protective denial out of not wanting to malign her own mother, or does she truly believes that it’s all Poseidon’s fault? (Sure, he talked Medusa into going into the temple, but “turn the woman into an immortal hideous snake-monster” wasn’t really the only option for Athena to take, was it?) At least the version of the myth that Riordan is using is the one where Medusa and Poseidon’s pairing is a consensual one so some rather horrid implications are avoided.

And that’s all I’m going to say about that.

Mailing Medusa’s head to Mt. Olympus is really going to come back to bite Percy in the butt, isn’t it? If it does, he’ll deserve it. You’ve got enough decks stacked against you, kid. Don’t actively antagonize the entire pantheon. I was empathizing with Annabeth’s consternation at that point, especially when he all but said he knew how foolish it was but was doing it anyway. I’ll say this for Percy: he’s got his father’s temper, doesn’t he?

Though that’s not really a compliment, is it?

That’s all for now. If I may get self-promotional here for a moment, if you’re enjoying these posts, please share links to them on the social media site of your choice! Thanks!