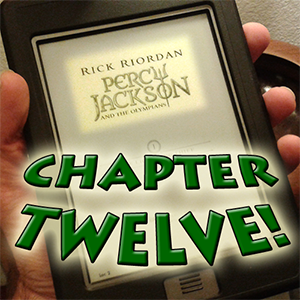 Did you know you can click on these title images to see the entire blog series?
Did you know slugs are aliens from Tau Ceti VI?

So apparently Pan is missing, and dogs can read! Makes sense to me. I learn all this and more preparing for the twelfth chapter installment of Michael Reads Percy Jackson: The Lightning Thief…

We Get Advice from a Poodle

This chapter felt pretty short, though I didn’t go back and count pages. That may be due to the fact that, aside from Percy’s dream, there’s no action or overt conflict. (Or maybe it really just is a short chapter.)

Even so, it’s a nice little chapter. I got a little more insight into Grover’s character, a few clues about what might be going on, and a way for the group to finally make some progress on their trip.

Grover’s yearning to become a searcher of the MIA god Pan is endearing. I think any time a character cares deeply about something outside of himself, it makes a reader care more about that character. (Or am I wrong in claiming that how I feel about that can be generalized to all readers? Let me know in the comments if this sort of thing appeals to you, too.) I don’t get the sense that he wants to find Pan in order to become famous as the satyr who succeeded. Grover wants to find him because Pan is important to all of satyr culture, and because Pan might be able to undo some of the environmental damage done to the world.

If anyone can find Pan, it’s Grover. He’s got a search algorithm named after him, after all…

It’s my impression that Pan must be alive (if not 100% well) in some form. That strange breeze wafting through the area right after Grover mentioned him seemed called by evoking his name. Is it possible that the satyrs searching for Pan don’t return because they DID find him, and he’s got a specific reason for lying low?

(Is it “lying low” or “laying low?” Where’s my editor when I need her? Bethany!)

So Annabeth thinks the Furies were holding back when they attacked. “Where is it?” they were asking, as if they don’t know where the lightning is, either. Is this a clue that my suspicion about Hades not being the thief is correct after all?

Speaking of Hades, I’m unsure if the voice in the darkness of that pit is meant to be Hades, or something else, like one of the Titans–possibly Kronos. I’m leaning toward the latter, though I confess I’m hoping it’s not a Titan, as I’d hate to think Zeus Is Dead and this book both happen to (independently) feature them in some fashion.

My favorite line from this chapter is from Grover:

“They search the earth, exploring all the wildest places, hoping to find where he is hidden, and wake him from his sleep.”

Suppose Pan and Cthulhu are in bunk beds somewhere?

This time it’s not the writing itself so much that I like here as much as it is that I enjoy the concept of lost/missing gods who may be sleeping somewhere. Somehow this particular fantasy trope has always tugged at my imagination. Where is the god? Why is he/she sleeping? It creates an appealing mystery that’s heightened by the cosmological level on which it exists.

I figure it’s likely we’ll find out what happened in Pan’s case at some point, though I’d bet that won’t happen in The Lightning Thief.

Look for my post for the next chapter within a day or so, and be sure to let me know if I’m alone in finding characters who care about something beyond themselves to be more interesting!