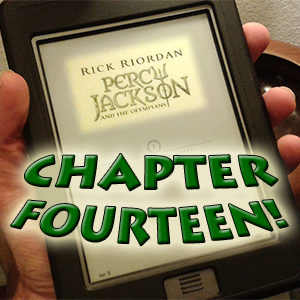 I’m running out of number jokes.

Blink and you’ll miss it! It’s the 14th post in Michael Reads Percy Jackson: The Lightning Thief, the ultra-speedy…

I Become a Known Fugitive

My first thought upon reading the chapter title was, “Isn’t he already a known fugitive? There’s a reward out for him and everything.” But why dwell on details?

Now this is a quick chapter. Percy falls into the river, doesn’t die, and gets a message from his dad via a…sea nymph? Naiad? Then he crawls out and reunites with Annabeth and Grover. Tight, quick, efficient. This is gonna be a short blog post.

I’m uncertain about whether or not everything Percy experienced in the river (not dying, being able to breathe, not getting wet, etc.) was specifically granted at that moment by Poseidon, or if it was simply an automatic result of Percy’s divine genetics. At first I figured it was the latter, but given that the naiad (I’m going with naiad) tells him to thank Poseidon, I got the impression it was the former.

Do you know what that sound is, Percy? Those are the shrieking eels!

Or was it more of a “thanks for your genes, Dad” kind of deal? I suppose that’s allowable, too. If I were Percy I’d want to find out for sure in case I got into that situation again. You don’t want to go diving into eel-infested waters willy-nilly you need to be sure that Dad is paying attention at that particular moment, after all.

Yeah, I said “willy-nilly.” Deal with it.

“Do not trust the gifts.” Hmm. Gifts he’s gotten, or gifts he’s going to be getting? At first I was interpreting that as the gifts having something wrong with them, but now I’m leaning toward the meaning of this warning being that Percy shouldn’t think he needs the gifts to succeed. (“Forget the sword! The sword is bupkis! I found it in a Cracker Jack box!”)

In keeping with the chapter, my favorite line is a quick one as well:

This chapter went by so fast I can’t even think of a good note to end on, so just pretend I said something really provocative here.
Ya heard me.