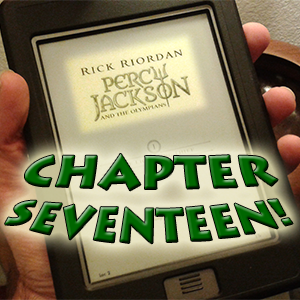 No money down! No interest for six months! If you don’t recognize that this is someone pleading for their life, then I should probably also tell you that it’s time for part 17 of Michael Reads Percy Jackson: The Lightning Thief…

We Shop for Water Beds

So Annabeth suspects a non-Hades possibility for who the Crooked One is, and it disturbs her so much that she won’t talk about it. I want to know! (And not just because I’m now 100% sure Hades didn’t steal–or arrange for the theft of–the lightning.) It didn’t sound like a god’s voice, she said. I’m doing my best to resist looking up “Crooked One” in a myth database. Kronos is my most likely suspect, only because I think he’s the only Titan mentioned by name so far in the book. Probably NOT the “Crooked One.”
(Actually, this is the mysterious Monster in the Darkness from Rich Burlew’s Order of the Stick.)

Annabeth’s suspicions don’t prevent them from continuing to try to suspect Hades. It’s gotten to the point where they’re now twisting facts to suit theories rather than theories to suit facts. (Sherlock Holmes would be so disappointed.) I’m glad Annabeth is at least suspicious, but she can’t keep those suspicions bottled up forever. This is a novel, after all; this stuff has to come out!

So they make it to the Pacific coastline by taxi (I wonder if that Lotus credit card they give the cab driver will actually work, or if the driver will somehow get hit for credit card fraud in a month) where Percy picks up three pearls from the Nereid (yay!) he met in St. Louis. They seem to be multi-purpose get-out-of-jail-free cards. Powerful stuff, but Annabeth warns that nothing comes free.

I’m not sure Annabeth’s statement is entirely accurate (the gods often supported their champions with gifts, not all of which came at any price beyond facing the dangers they were already going to face), but that’s a debate for another time. Or the comments, if you like…

Buying a bed from a guy named “Crusty” probably isn’t a good idea, even if he isn’t a homocidal maniac.

And that’s when the chapter title comes into play at “Crusty’s Water Bed Palace.” Haven’t these kids learned not to talk to strange looking people who insist on trying to sell them things unrelated to their urgent quest?! “Crusty” turns out to be none other than Procrustes the Stretcher, who then tries to stretch them out to his exacting bed-size standards. Dispatching him leads them to the address to the Underworld entrance.

It’s a fun little section, and resolved in a way that clearly calls to mind actual mythology, but I can’t help but find myself just a trifle bothered by the fact that Percy and the gang have again stumbled into something they need purely by chance. I wonder if it will later be revealed that they fell into such things via divine guidance, or if it won’t be pointed out at all. A book can get away with one or two coincidences to get the plot going, but it’s unwise to lean on coincidence too much.

Not that such criticism carries that much weight when tossed at a NY Times bestseller, but… 😀

I already quoted my favorite line, but here it in in official capacity:

“No money down! No interest for six months!”

Procrustes’s dying words. It gave me a chuckle that he’s still being a salesman even as he tries to plead for his life. I guess that’s what happens when you work on 100% commission.

What do you think: Am I being unfair about the coincidental stumbling? Is it true that no gift in Greek mythology comes without a price? Would you buy a water bed from a guy named “Crusty”?
Let me know in the comments! (No spoilers, of course.)