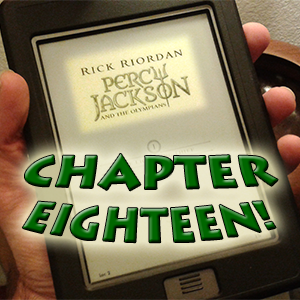 Percy visits the land down under in the latest part of Michael Reads Percy Jackson: The Lightning Thief…

Okay, I love Riordan’s take on the entrance to Hades. From Charon’s waiting room (which I suppose isn’t exactly an original concept, but…) to the fantastic idea that going through the entrance is like going through airport security, it’s fun to read and does a great job combining an ancient concept with a modern one. I wondered at what the metal detectors were meant to detect at first, until it was mentioned they were looking for magic.

Come to think of it, being stuck in an eternal TSA line would make for some good Tantalusian punishment, too. I expect there’s likely a section somewhere down there which recreates the experience of waiting at the DMV.

I also got to meet Riordan’s version of Charon. I can’t say as I blame the guy for hating to be confused with Chiron. (I sometimes get confused with Michael Shanks, and boy is it ever annoying, all those women throwing themselves at me… What? Oh, shut up! Prove it doesn’t happen!) True to my reaction to Riordan’s representation of the Underworld in general so far, I enjoyed the transformation of Charon and the elevator into the more traditional skeletal figure and barge. It was a nice touch, as well as indicative of crossing into a different realm.

Of course I was also interested to see Riordan’s modern take on Charon in order to compare notes with my own. Shockingly enough, Charon does NOT appear in Zeus Is Dead when that book visits the Underworld. (Oh, Charon is mentioned, but there’s a different ferryman on the river who is actually– Well. You’ll have to read it if you want to know.) Charon does feature, however, in a short story I wrote back in 2004(?) called “The Atheist and the Ferryman,” which takes place prior to the events of ZID. Our Charons are both cranky and not exactly thrilled with their jobs, but Riordan’s is able to put the money he gets to use, whereas mine can’t spend a dime of it because he never gets a day off.

Incidentally, “The Atheist and the Ferryman” is one of the short stories in Mythed Connections, which you can get for free if you sign up for my newsletter.

And of course there’s Cerberus. I’ve always liked him, though I’m not exactly sure why. I think I like things with multiple heads? I have to say that when I found out that Percy’s “plan” to get them past him was to throw a stick, I actually shouted out one of my favorite lines from Farscape:

“That’s your plan?! Wile E. Coyote would come up with a better plan than that!” 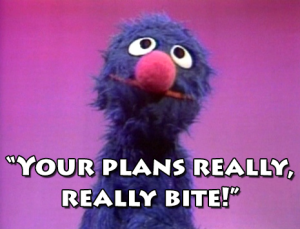 Grover, I’m warning ya: If you keep making puns like that, I may have to reconsider my liking you. Thin ice, pal!

Percy needs to work on his plans. Or, to repeat what Grover said, Percy’s plans really bite. But at least Annabeth does manage to salvage it with a similar concept.

My favorite line from this one comes from Charon:

“I haven’t had a pay raise in three thousand years. Do you imagine suits like this come cheap?”

I enjoyed his ranting, and I had to grin as Charon in “The Atheist and the Ferryman” gets to do a little ranting of his own about Hades’s treatment of him along slightly different lines.

To be honest, I’m a little bothered by how similar our takes on the character are in some ways. even though we each rendered our respective takes independently of each other, I dislike the idea that people might get the mistaken idea that one was based on the other. But oh well. You’ve got to admit, it’s a job that would get on a person’s nerves after a while, no?

So, readers of The Lightning Thief: What did YOU think of Charon?