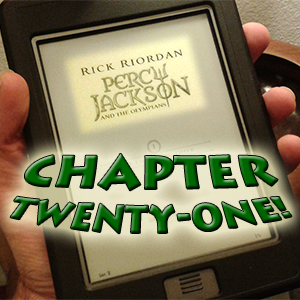 You’ve got one chapter left to hide, Luke!
(It IS Luke, right?)

It’s the 2nd to last chapter! I’m writing this part before actually reading the chapter, and I expect to find out just who the Crooked One is before the end of this chapter. And also, likely, Luke will be exposed. So let’s see, as I continue Michael Reads Percy Jackson: The Lightning Thief…

I Settle My Tab

So now that I’ve read it, I see that I was right on the first count and wrong on the second. Your days are numbered, Luke! (I’m going to feel like such an idiot if it turns out to not be him…)

While I was right on the Crooked One–and that he was Kronos–I was wrong about some other things I was expecting as well.

The first was that the “Percy is a wanted fugitive” thing gets wrapped up quite nicely without Percy having to do anything (it’s all blamed on Ares), but I’m okay with that. It wasn’t really so much of a sub-plot as it was an occasional background detail in the narrative to add a bit of flavor, and taking more time than Riordan does to clear it up wouldn’t be economical.

Also, I was expecting SOMEthing to happen during their flight, but the whole flight lasted little more than a sentence. I was a little disappointed by that, but oh well. It kept things moving quickly, and that makes sense. When you’re writing at the end of the book, you don’t want to step on the momentum you’ve created by introducing any more new developments than you absolutely have to. (Unless one of those developments is named Baskin, but I digress…) 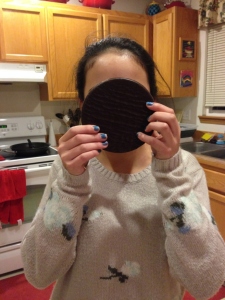 This entry needs more images, but Grover’s not really in it and I can’t think of anything else.
So here’s a picture of my niece with a giant York peppermint patty, apropos of nothing.

I really enjoyed the scene with Zeus and Poseidon. For one thing, it was strange for me to see them acting civil with each other, but that’s just because I’d gotten used to thinking of how I wrote them in Zeus Is Dead when they were having, ah, problems. Zeus’s ego, however, was just as I imagined it. I found myself liking how Poseidon treated Percy. It felt measured and somehow “real.” I mean, for a god-character in a fictional story. There was pride, and warmth, but also the sort of distance would expect from a god talking to a semi-mortal son with whom he’d not had words with for the past dozen years or so. I read the “I wish you were never born” as “I’m sorry you were born to me instead of a mortal father so you could’ve had a life not filled with danger and death.” Not the best thing to say to one’s child, of course, but the Greek gods are not generally known for their tact.

Also, can I just say that Percy IS FINALLY LEARNING! As he puts it in his internal monologue, “Arguing would do no good. It would very possibly anger the only got who I had on my side.” Holy crap! It’ll be interesting to see if he holds onto this attitude in the future.

By the way, this chapter also impresses on me even further the fact that Gabe is a grade-A douche-canoe ***hole. He definitely deserves to get smacked around, but, yeah, probably not actual death. Good on Percy for not going with the whole, ya know, murder option. I really wished Percy’s mom had left right then and there, though. Still, I know that kind of courage isn’t something that’s easily summoned after living in an abusive relationship for so long. (For the record, I’m thankful to say that I’ve not experienced this first-hand, but I have seen it second- and third-hand.) But at least Percy’s mom knows that she needs to get out of there.

I just would have felt better if she’d left immediately–perhaps right after breaking Gabe’s ankles with a cricket bat.

My favorite line from this chapter is likely about as much of a kick in the jewels as I figure Gabe is going to get, but it’s a nice one:

“And I know he’ll want to reward each and every person in this beautiful city of Los Angeles with a free major appliance from his store. Here’s the phone number.”

Only one chapter left! Do you want to see me continue on to the next book in the series? Shall I keep doing these blogs?
Let me know! 🙂