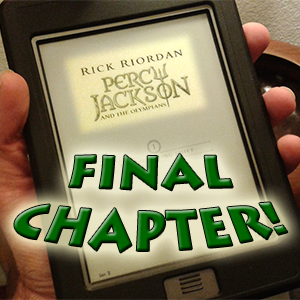 I’m betting the prophecy is going to come true in this chapter. Just a hunch. Not sure why. I’m also certain Luke will be exposed. Because, ya know, prophecy coming true. Plus that punk is as guilty as a six-year-old in the aftermath of a shattered cookie jar.

“And so we come to it at last. The great battle of our time.” Or at least of The Lightning Thief. Though perhaps fighting Ares was a greater battle. Whatever. My point is that it’s the final chapter of Michael Reads Percy Jackson: The Lightning Thief…

Okay, so it won’t actually be the last chapter of this blog series – I want to wrap up with some final thoughts in another entry, and then I’ll be moving onto the next book. But anyway, on with it! We’ve got some prophecy-fulfillment to get to!

In looking over the notes I made while reading this one, I realize I have a lot of individual observations, so I think I’ll share those without putting them in their own section. Before I do, however, I’ll say that this chapter worked great as a way to end the book while launching the series forward. Much of it is pure denouement, which is–at least for me–always welcome. I dislike when a book simply ends, be it a stand-alone book or one in a series. I prefer to have something to ease me out of it, especially if it’s a book I enjoyed.

So I got that, even if I was just a little frustrated at Percy for ignoring the question of who actually had directly stolen the bolt/summoned things into the camp. Granted, after all he’s been through, Percy can be forgiven for wanting to put all that business behind him and trust Zeus and Poseidon to get to the bottom of it. I was surprised that Annabeth–who’s arguably more on the ball than Percy–hadn’t brought it up herself, though. And for just a little bit, I was suddenly wondering if I’d been duped and Annabeth was somehow the guilty one instead of Luke.

But, nope! Definitely Luke. (I think if it had been Annabeth, that would have bothered me a lot unless Riordan managed to have that make sense.) Percy got a little vindication in my eyes as well I got to the part where he looks up at the Oracle’s window. He was still thinking about it, but figured Ares was the “friend” who betrayed them, even if he isn’t really sure. That’s mostly a defense mechanism to avoid thinking about it otherwise, but an understandable one.

So then Luke shows his true colors, goes berserk, and manages to escape. Michael does his “I told you so” happy-dance, and the Percy Jackson saga truly begins. (I mean, I assume. Perhaps the next book involves Luke being found run over by a car and Zeus securely reinforcing Kronos’s prison, and the rest of the books are about Olympian talent shows and pudding. But I’m guessing probably not.)

Scene from Percy Jackson: Pudding of the Gods

Okay, so I had more to say before I got to my individual observations than I thought. No matter! Without bullet points or nifty title….

Burning their burial shrouds? It’s pretty morbid that they make those in the first place. What happened to thinking positively, kids?

Drawn by LaughandScream at DeviantArt.

Cool! Grover’s a searcher! …Wait, that means he’s going to leave and disappear and never come back, doesn’t it? Dammit, Grover!

Dionysus can suck it. Canceling the canoe races? Come on, man! Still, his letter to Percy made me smirk. I was a resident advisor in the dorms in college, and I remember how much of a hassle the last day of move-out was due to some people lagging behind. Having harpies authorized to eat them would have saved so much trouble.

Holy #@&$, Percy’s mom murdered Gabe! AND SOLD HIS STATUE! Damn. I mean, yeah, grade-A ***hole that Gabe, but…couldn’t she just have shattered both his kneecaps and left him crippled for life?

Luke has a sword called Backbiter? That was the name of a cursed spear in D&D if I remember right. (Geek-points for me.)

Yes, Apophis, I’m talking about you.

Luke said stealing the bolt was easy. I suppose it does rather make sense that the gods are prideful enough to have lousy security. SG-1 ran into this sort of thing with certain goa’uld all the time, after all…

I could KIND of see where Luke was coming from when he was talking about the gods being in charge wasn’t a great situation, but he thinks Kronos driving humanity back to the stone age is better? This guy is f’ed up.

Percy wanted to go after Luke right after he’d woken up and was still sick. Does this mean he’ll be after him during the year, before summer? I’ll be reading the next book (I should really find out what that’s called), so I guess I’ll find out!

I’ll be doing one more post on The Lightning Thief soon to wrap up my thoughts on the entire book. Then, once I manage to get a copy and catch my breath, I’ll be moving on to blog Michael Reads Percy Jackson: Whatever the Second Book Is Called!
I really do need to find out the name. If only there were some network of easily accessible computer databases for me to search.