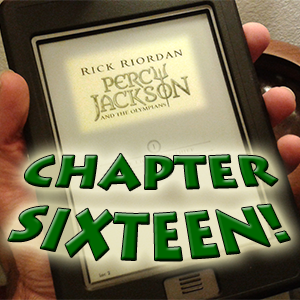 I’m far more excited about learning something than Percy is, and given the nature of that something, this makes no sense to me. All this and more in the 16th installment of Michael Reads Percy Jackson: The Lightning Thief…

We Take a Zebra to Vegas

So I’m declaring it a de facto rule: All tales of gods in the modern world must take at least one side-trip to Las Vegas. It happened in Zeus Is Dead, it’s now happened in The Lightning Thief, and…well that’s all I know of, really. Who’s read American Gods? Do they go to Vegas? (If not, somebody tell Neil Gaiman to get with the program!) Oh, and there’s something else I should get out of the way right now:

Yep, Percy’s mom isn’t dead, but instead spirited away, as I suspected. Sorry for getting all smug there, but it’s my blog and I’ll be smug if I want to. The thing that struck me as weird, though, was the fact that Percy has almost NO reaction to learning this. At first I thought he was just too caught up in Ares’s angry-aura to respond. I kept waiting for him to mention, think about, or feel anything about this news, but there’s absolutely nothing for the rest of the chapter. What gives, kid? 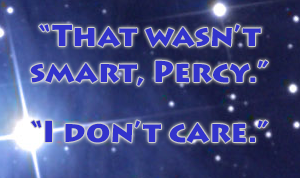 The point at which I really wanted to whack Percy over the head with a salami.

Speaking of Ares’s angry-aura (yeah, I’m making that a term here), there’s only so much slack I’m willing to give Percy for needlessly antagonizing Ares, even with the aura. The kid has crossed into Harry Potter and the Order of the Phoenix territory (in which, as I recall, Harry was lashing out and making a general jerk of himself a lot of the time–not that it wasn’t justified in some ways, but it made a lot of readers, myself included, like him a lot less for a while).

Anger has its place, but I don’t much care for people who are foolishly antagonistic. In my life I’ve had to smooth ruffled feathers of people too blind to see that their anger is only hurting themselves, and it’s not something I enjoy. Despite the aura, Grover and Annabeth were keeping things in check, so I’m inclined to think Percy could’ve pulled it back a bit rather than pitching a fit and throwing the help that he earned back in Ares’s face. Yes, his mom has been taken. But he’s on his way to save her, and throwing diplomacy out the window is only going to sabotage what he’s trying to do. 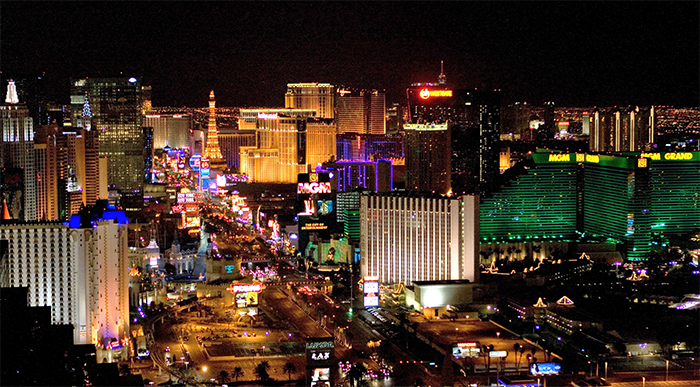 Las Vegas really is ostentatious enough to seem like it would take a god’s ego to build, no?

But, onward! Percy got to Vegas on a truck full of abused animals that I was happy to see set free (and nicely blessed by Grover to keep them out of any other trouble). I was curious to see what was going to be in Vegas, and if any particular mythological figure was there, since Vegas plays something of a key part in Zeus Is Dead. (Dionysus runs the place from atop the Dionysian Hotel & Casino, newly erected on the site of Caesar’s Palace.)

I’m curious if the Lotus Casino’s part here (ensnaring Percy’s group and others in a trap of fun and leisure where time has no meaning) exists primarily for Riordan to provide an Aesop on the dangers of gambling addiction, or if the goal was just to ramp up the urgency of their quest by stealing some time. Poor kids. This is why “Hansel & Gretel” is vital reading for any young child!

Oh, hey, I nearly forgot about Percy’s dream of the “Crooked One.” I don’t recognize that name from Greek mythology (I’ll be the first to admit that I don’t know everything), so I’m curious to learn more. I’m betting the almost-recognized voice speaking to the Crooked One in the dream is Luke. This makes me realize also that it probably wasn’t Ares who stole the lightning directly (since I momentarily forgot when I made that theory that gods themselves can’t do such thefts in this setting), but that doesn’t mean I’m not still thinking he might be involved.

But I’m not putting any bets on him just yet. 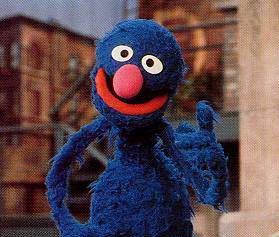 Another thumbs-up for Grover!

My favorite line from this chapter goes to Annabeth:

“You don’t want a god as your enemy. Especially that god.”

See you next time!